Beep…Beep…Beep!  As the last truck rolls out of the Direct Energy Centre, another show is over and another year’s efforts have been packed, loaded and swept up; returning a space that was alive for ten days, back to an empty span of concrete and steel.

Once again members of Landscape Ontario came together and put hours of planning, thought, discussion, collaboration, teamwork and labour into producing another display garden for the association. Suppliers and competitors unite as peers to show off the very best of Landscape Ontario and what is possible when we dare to dream.

This year’s garden theme was “Timeless…what’s old is new again.” It was to show how we have grown and developed as an industry and a trade while also celebrating our 40th anniversary.

From reclaimed timbers to reusing elements produced for other gardens, the design and build team created a garden that flowed from the old into the new/modern era, all the while branding LO at every turn. Members can be proud of their peers’ efforts to brand their association to the public. Thanks go to every single person whose name is listed in the Contributors list on page 7. They all deserve our gratitude.

The end of every garden build leads us to also to debrief the build and review what went well and what needs improvement. Having been a part of the LO garden build the last four years in different capacities, I would like to have members think on a couple of suggestions.

Canada Blooms is our biggest single public forum, or touch point as an association. We want to show off what we can do.  However, many visitors left Canada Blooms thinking that Landscape Ontario is simply another landscape construction company. We need to create a better way to inform them of who we are. Building display/feature gardens, whether the largest ever undertaken (2010) to the smallest (2011), these gardens take immense commitment, dedication and efforts from those who volunteer to take on the challenge while at the same time running their own businesses.

Ask many of them why they do it, and you’ll get similar responses, “It’s fun,” “Great group,” “The challenge.” Not one of them will ever tell you it’s to get their name out there, or to generate business. They do it for the same reason that Simon Sinek talks about in his book Start with Why. They do it because it matters to them; they do it because they are selfless promoters of our trade and because they want to leave a legacy of inspiration by example to others of what it means to be a part of LO. They GIVE!!

One of our past presidents Gerald Boot once described marriage or any healthy relationship as one where both parties operate from the concept of give, because when one takes, then the relationship breaks down. This is brilliant, and is the concept of LO members constantly giving. 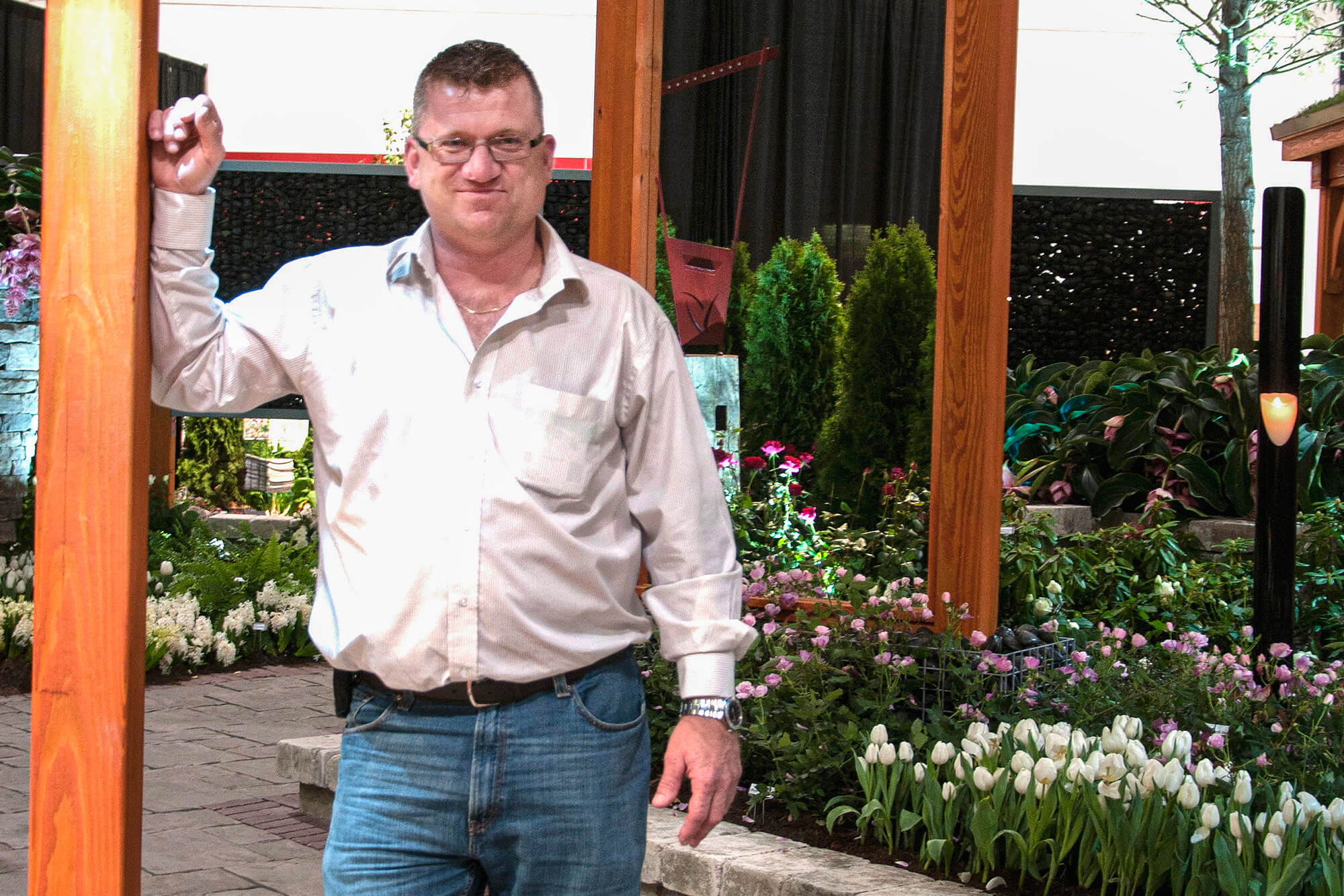 Paul Doornbos at Canada Blooms. Burn-out happens to volunteers when, after years of giving, they need a break and require others to carry the torch in order to create sustainability. After five years of display gardens built by countless members who have given so much, maybe it is time to consider an alternative way for LO to give back to members. One possibility may be to have the winner of the Dunington-Grubb Award get the right of first refusal to build the feature garden in the LO space at Canada Blooms. Give them the opportunity to create a feature garden as their reward, using the garden subsidy and LO allocation. Would it inspire members to aspire to new heights?

All members have the opportunity to win this award. It could lead to a creative way to sustain the continued building of a feature garden.

These are simply my thoughts and observations from the last four years. I will be leaving my post as co-project manager of the LO garden with the hopes that someone will feel inspired to take up the challenge and continue to build and grow the LO legacy going forward.

In closing, it has been my great privilege to have worked with the TEAM, many with multiple years of service who have become more than peers and colleagues. I am very proud to call them friends.