Some gifts have been showing up on my doorstep for two years now.
Some come preassembled and some come in parts I had to put together myself. Some come disguised as other things.
I cherish them all. When I so much as think about them, a big smile takes over my face. Allow me to elaborate...


The first gift was the discovery of a wooden cross; a temporary grave marker at a field hospital near Vimy Ridge in France. My great uncle, Pte. John Ferman Ashe, died of his wounds at Vimy during the first day of battle on April 9, 1917. I re-gifted the cross to The Canadian War Museum in Ottawa, thinking how proud my great-grandmother would have been to know her son’s selfless actions were remembered after 100 years.

The next gift came to me over 18 months, little bits at a time. That’s when the Vimy Oak Legacy project allowed me to assist in a small way. Lt. Leslie Miller, who fought at Vimy Ridge and survived, sent a handful of acorns from the battlefield home to Ontario, where they matured into 100-year-old English oaks. A neighbour and friend of Lt. Miller, Monty McDonald, came up with a plan to take cuttings from these Vimy Oaks and distribute them across Canada, to Legions, cenotaphs and schools, and to send trees back to France to be planted on the ridge as a beautiful new park.

My part was to receive the saplings ordered for New Brunswick and P.E.I., and have them picked up at my house. BTN Atlantic offered to ship them for free. When the first was scheduled to be planted in Cardigan, P.E.I., I delivered it personally, and worked with association member Kurt Laird to get it planted. That evening, spent in cold spring rain, and later the Legion, was so profound and meaningful, I took part in as many of these memorial plantings as I possibly could. I felt compelled to be present in these little communities, representative of every little community across Canada, to plant a tree representing a forest on both sides of the ocean, and a living memory to the soldiers from those communities, who fought for Canada. As an added bonus, I got to honour my late uncle John.

I have planted over 100 of these memorial trees, always taking away more than I put in. To me, planting a tree symbolizes hope, and honours a memory of people and events. During each ceremonial planting, we stood at the intersection of hope for the future and remembrance of the past. At a planting at Seaside Elementary School in my home town of Saint John, I asked the group of veterans, teachers and school children what would happen if this little sapling dies. It took a few minutes of awkward silence before a little girl said, “We plant another one.” Exactly.

Last fall, of all the little saplings we planted, 20 or so in P.E.I. and more than 40 in New Brunswick gifted us acorns. J. Frank Gaudet Nursery of Charlottetown germinated 60 of them. These seedlings were used to replace saplings planted the previous year that did not survive. The rest were planted at schools, Legions, or at the home of anyone who had a relevant story to tell.

The most recent gift was an opportunity to plant an oak seedling at Vimy in France — one of the seedlings sent in 2016 for the 100th anniversary of the Armistice. Monty McDonald gave the okay for me to plant one in a special spot of my choosing. My first thought was to plant it near Vimy, at the cemetery of my uncle John. The Commonwealth War Graves Commission has very strict rules, so that was not possible. Okay, life has taught me to always have a Plan B. I could possibly plant my oak at the Vimy Memorial itself, at the new Centennial Park. So I decided in August that when I went to France to plant a tree, I would leverage that opportunity to raise money for a special cause, the Alzheimer’s Society. I would bicycle 1,000 km, starting in P.E.I. at Cardigan, and after cycling across Belgium would wind up at Vimy in France. I was ready; Centennial Park was not. Removal of 100-year-old unexploded ordnance was taking longer than anyone thought. Plan C. My wife’s name is Theresa. There is an elementary school in the little town of Vimy called Ste. Therese. Serendipity perhaps? The school, however, has no greenspace for a large oak to grow old. Plan D then was to be a planting on town property with school children in attendance. That would be amazing, but calls to the mayor’s office were unreturned. Plus, we were running out of time.

By Oct. 11, the little oak was still at the nursery near Paris, and I was still in Belgium. I had the phone number of Francois Brioche in Arras, a few kilometers from Vimy. Full of hope, we arranged to ship the tree to his home. When I arrived on Saturday the tree was there, but we had no place to plant. The next day was Sunday, and Monday was my last day in France. As we walked across the Place des Héros in the centre of town, Francois looked at me and said, “What are you going to do with the tree, Jimmy?” I told him he would have to find a home. I was not greatly disappointed. It was, after all, the tree that led me here to France,  that led me to raise over $5,000 for Alzheimer’s, and that will lead me back someday. In addition, the tree will go on to fulfill its purpose… to remind others. 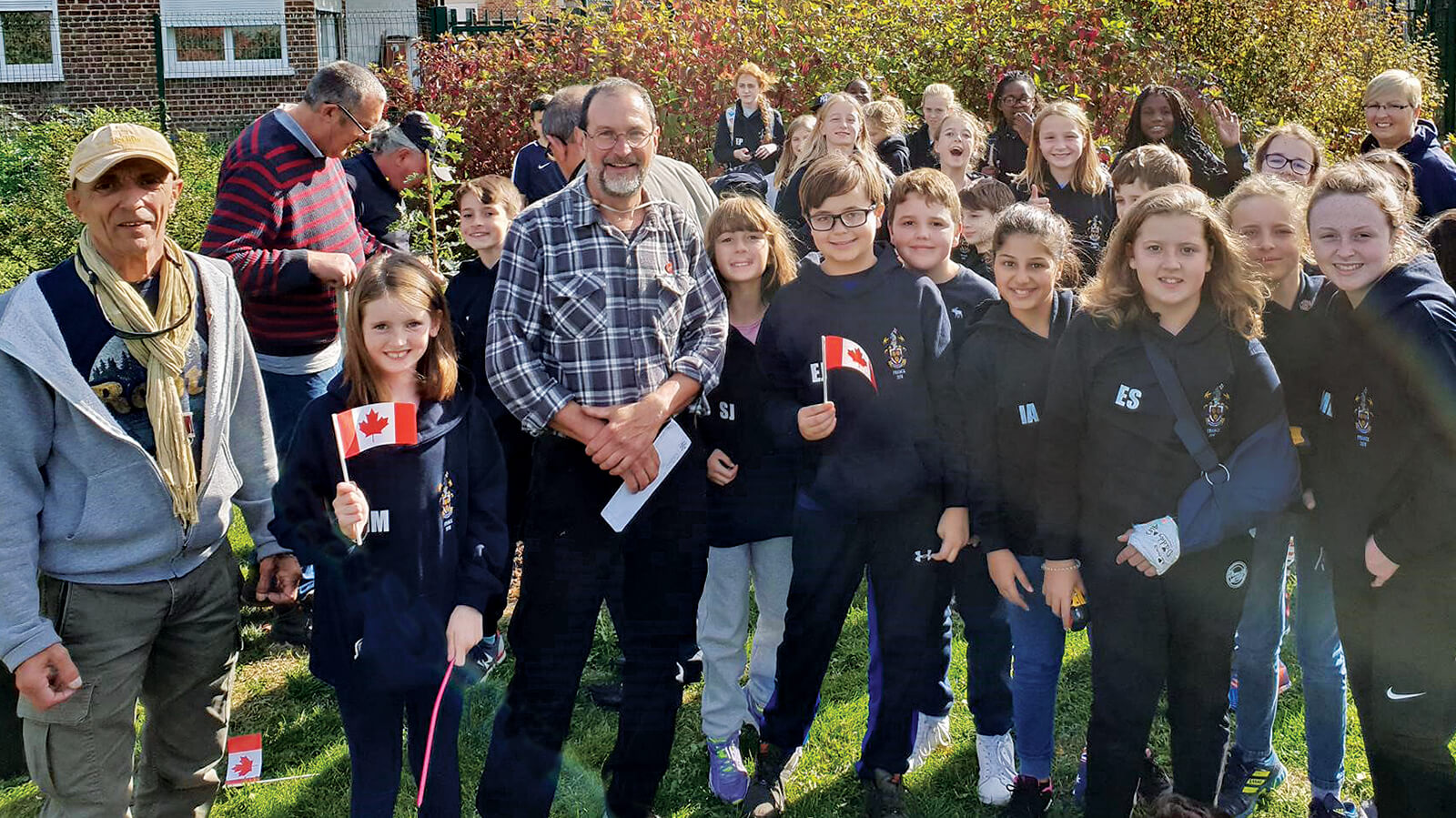 The children of St. Edmunds College gathered to hear the story of the Vimy oak legacy and watch the planting of the tree. The next gift came in the form of the Mayor of Arras, who just happened to be in the café my new friend and I had ducked into. As a bonus, Francois knew him as a speaking acquaintance. We told our story and Mayor Frédéric Leturque granted permission to plant the tree in a park by the railway station called Wellington Tunnels. I had a bag of Canada pins and another fistful of flags in anticipation of an audience. I wished we had a bus full of children to attend the ceremony.

This last gift came about by divine intervention, I am sure. St. Edmunds College is the oldest Catholic school in England; it was founded in 1568 in the Douai Valley of France, the valley that Vimy Ridge gazes over. The school’s bus was parked in the lot beside Wellington Tunnel. I’ll let Steven Cartwright, head of St. Edmunds Prep School, tell the rest:
Dear Parents and Guardians,
Sometimes the universe conspires for you.
On Monday afternoon, I found myself in the city of
Arras, Hauts-de-France, surrounded by 39 Form 6
children and the accompanying staff. We had stopped
for a short break outside the Wellington Quarry and,
from nowhere, a man came running up to me carrying
an English oak sapling around eight feet high.
“Excuse me,” he said in a Canadian accent, “I don’t mean to bother you
but I wondered if you would like to learn the story of this tree.” Intrigued,
I encouraged him to explain more.
About 10 minutes later, the children and I were
gathered on a small green, near the entrance to the Quarry,
saying a prayer to commemorate all those who fell in the Great War.
As we watched, labourers dug a hole and
the Mayor of Arras, together with the Canadian man, planted the tree.
Our children sat on the grass around him as he told us his story.
Form 6 considered the 11,285 Canadian men who fell as a result
of the battle which began at 5:30 in the morning on 9th April 1917.
The children were respectful, they listened attentively and they learned.

If ever you get a chance to make your family proud, you should jump at it. It’s a great gift to give. 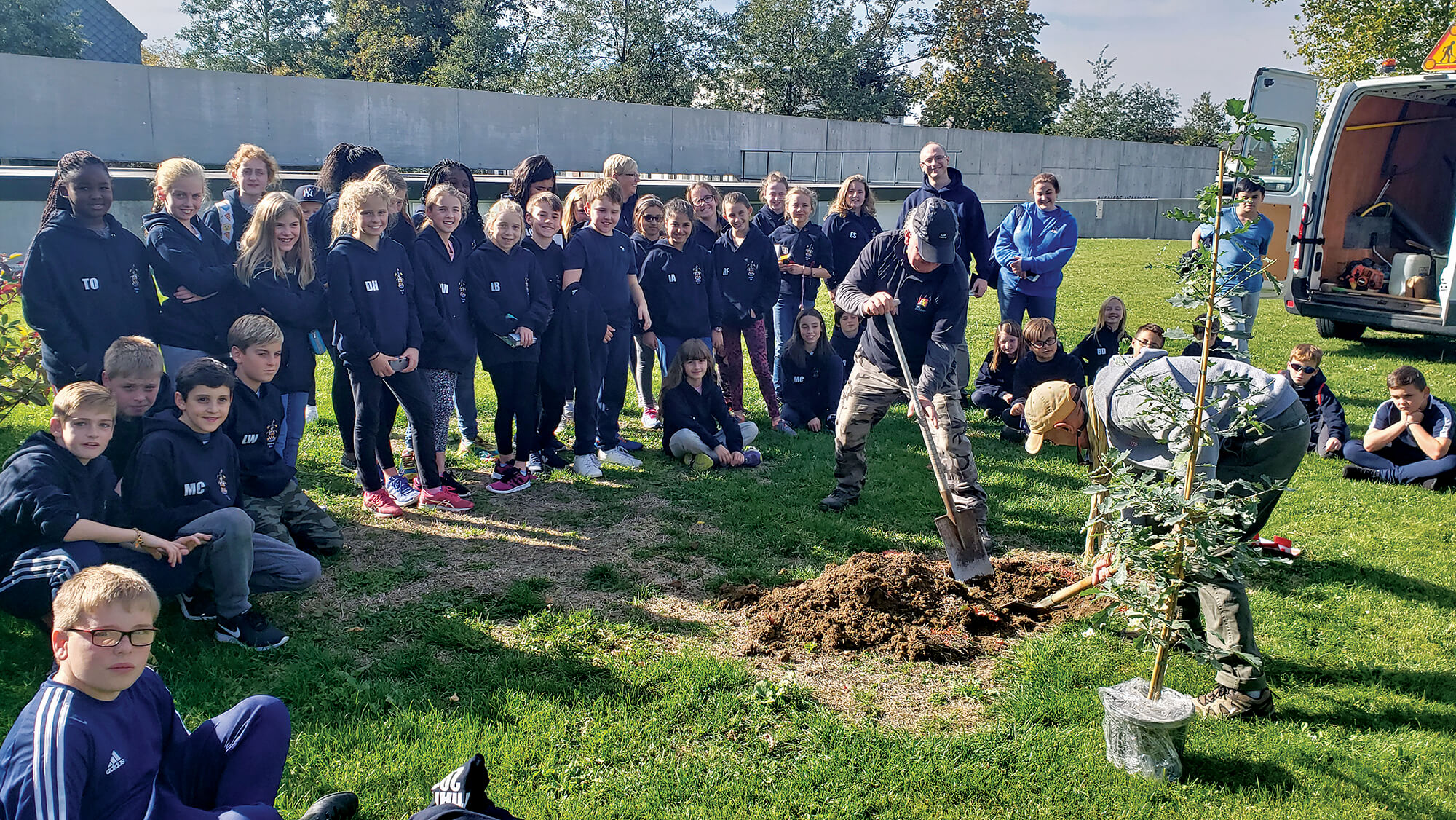