Landscape Ontario's Standard Form Snow and Ice Maintenance Contract standard form contract was prepared through the Snow Committee of LO’s Maintenance Commodity Group, which included representatives of insurers and the legal profession. The Committee’s goal was to develop a Contract that was fair to both the contractor and the property owner/manager. The Committee was given this mandate because LO members and their insurers faced an increasing number of slip and fall claims over the last several years, leading to increased premiums for many snow maintenance contractors.

The standard form contract attempts to address the problem of the poor contract. The standard form must not be used blindly, however, because its use and application will vary from contractor to contractor and from project to project. This is because:      Accordingly, contractors must take care in using the standard form, understanding its structure and the meaning of its terms and conditions. Contractors must also understand how the various ways the contract can be filled out will determine the allocation of risk between the parties.

The standard form contract is in two parts. The first part contains terms and conditions that can apply to all premises. Among other things, this part details the duration of the contract and who the parties are. It deals with issues such as Worker’s Compensation legislation, insurance, notice provisions and the potential for the contractor to be impeded or delayed in his work.

One very important part of the standard form (and of any snow maintenance contract) is that it determines when and how ice melting products are to be applied to the premises. This is significant because in the vast majority of slip and fall cases, the question of who was responsible to determine when, if at all, ice-melting products were to be applied is raised. This responsibility lies with the owner unless and until it is transferred to the contractor. Accordingly, the contract should properly and accurately detail the extent to which the contractor assumes this responsibility.

In summary, if properly used, the standard form will allow the contractor to limit his liability to, and accurately describe, the work he agrees to perform. There is not enough space in this article, however, to fully discuss how the contract can be used to accomplish this goal. The contract is only one part of a sound risk management strategy. 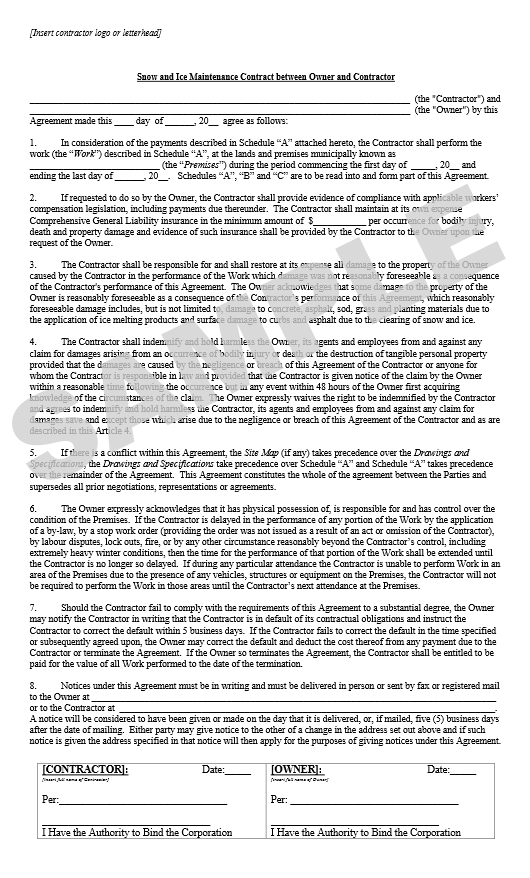