GreenTrade Expo has become a destination for industry in both Ontario and Quebec.

Share
Tweet
Mail
Industry members from all over Ontario and Quebec gathered on Feb. 10 at the EY Centre for the 23rd edition of GreenTrade Expo, Ottawa’s premiere trade show event.

From its humble beginnings with only a few eight foot tables and 12 exhibitors in a hotel meeting room, GreenTrade Expo now occupies a 40,000 sq. ft. exhibit hall showcasing 115 exhibitors. Presented by Permacon, the event has become Eastern Ontario’s most attended trade show.

GreenTrade has also become a destination for members of the landscape industry to gather. Again this year, the LO designers group held a meeting the day prior to the show. Designer group chair Chris Mace and LO executive director Tony DiGiovanni met with Ottawa area designers to discuss communication strategies and changes facing the industry.

Also continuing this year was the second annual Ottawa Awards of Distinction suppliers gala, presented by Permacon. This year’s event took place in a new venue within the EY Centre. With over 175 attendees, the evening was hosted by GreenTrade Expo show chair Bruce Morton of CityScape, and Ed Hansen of Hansen Lawn and Gardens. The duo provided comic relief throughout the evening and provided support to the presenters of the new special awards added to the program.

The second new award, The Joan Johnston LO Community Volunteer Award, sponsored by Greely Sand & Gravel, recognizes individual members who have demonstrated an outstanding commitment as volunteers to the Landscape Ontario community. Joan Johnston, who has volunteered extensively in the Ottawa Chapter as a past president of the association (and who is one of only two women to serve as president), presented the awards to: Paul Doornbos, Richard Rogers, Tim Kearney, Sarah Johnston, Terry Childs, and Kennedy Johnston. 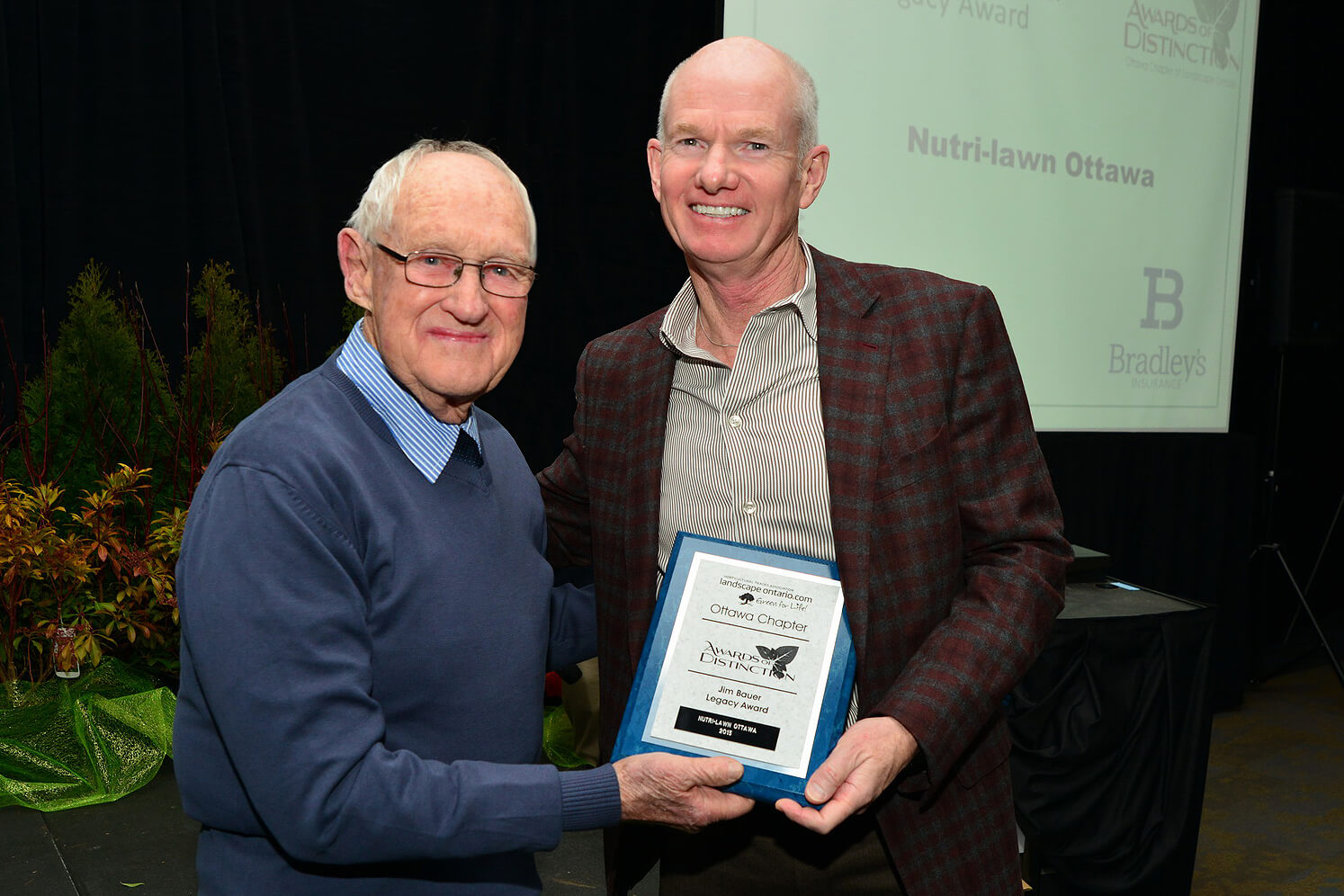 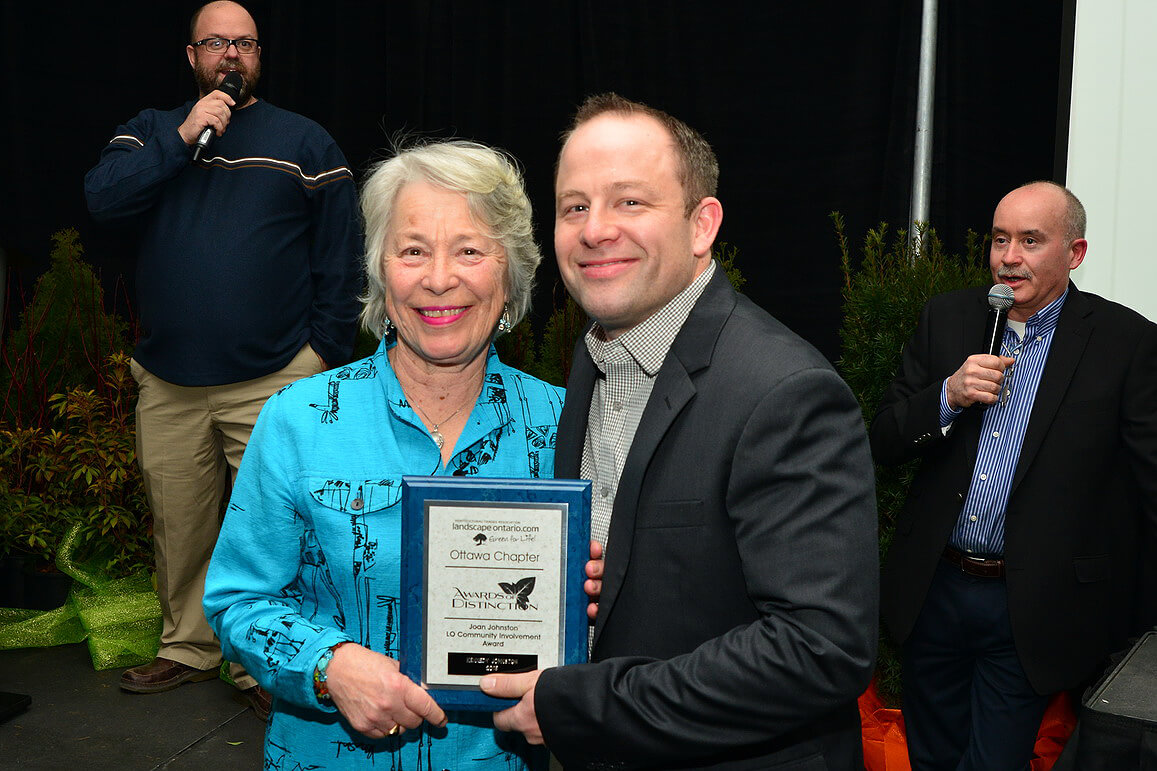 The trade show component of GreenTrade Expo continues to be well-attended by all sectors of the landscape and horticultural industry as it provides networking opportunities and education for both business owners and employees alike. The popular MTO contractors breakfast, sponsored by Connon CBV, Tubman’s Chev, and Manderley Turf Products, was well received by over 75 attendees. The MTO booth on the trade show floor continues to be a popular resource — explaining the proper safety requirements for trailers used widely by the landscape industry.

The perennial networking location of the coffee bar, once again co-sponsored by Bradley’s Commercial Insurance and Geosynthetic Systems, was designed by Ottawa board member and landscape designer, Ashley Cochrane, and constructed by Geoff Pratt, owner of RJ Rogers Landscaping, and his crew.

Students from the Algonquin College horticultural program, under the tutelage of Steve Neumann and Tommy Wingreen, were once again an integral part of the show. The students helped set up the coffee bar, the Landscape Ontario booth, floral displays, as well as the registration area and take down of the show. A huge thanks to Connon NVK for providing the floral product for the show and to the Algonquin College horticultural program for providing the spring flowering bulbs that were used throughout the show and the awards gala. 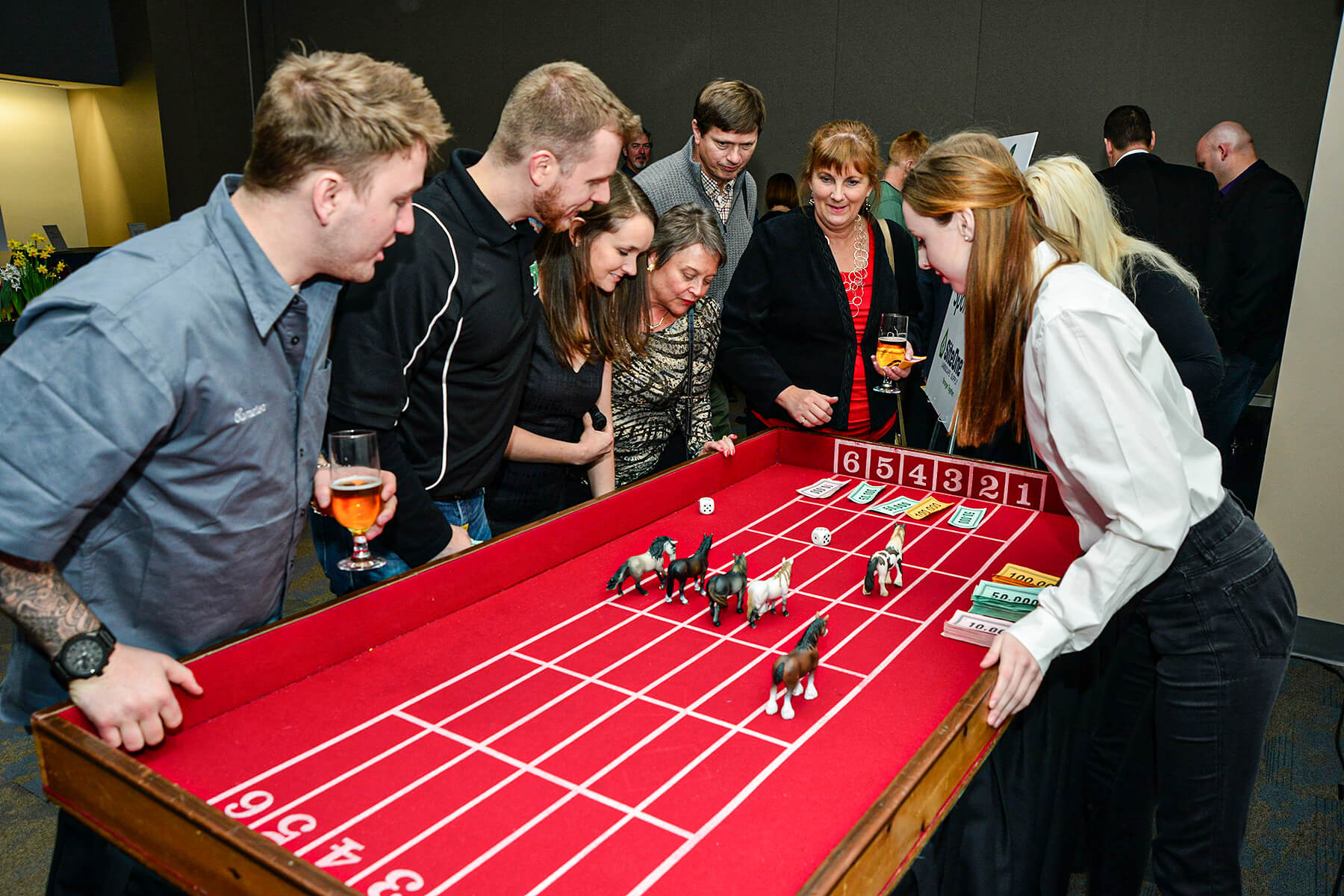 Bruce Morton, GreenTrade Expo show chair, expressed his sentiments of this year’s show, “We are delighted how the show went this year. The awards gala was a fabulous party and a great opportunity to celebrate our terrific suppliers. Everybody had a ball. The new awards recognizing members were well-received and a great way to honour those who have supported Landscape Ontario for many years. I’ve had a lot of great feedback and enthusiasm about the potential for increasing the show to two days next year, and I know we have a first rate team of people who are working to make that a reality.”

Show attendance saw a slight increase over last year and show organizers are thankful the weather co-operated again this year. 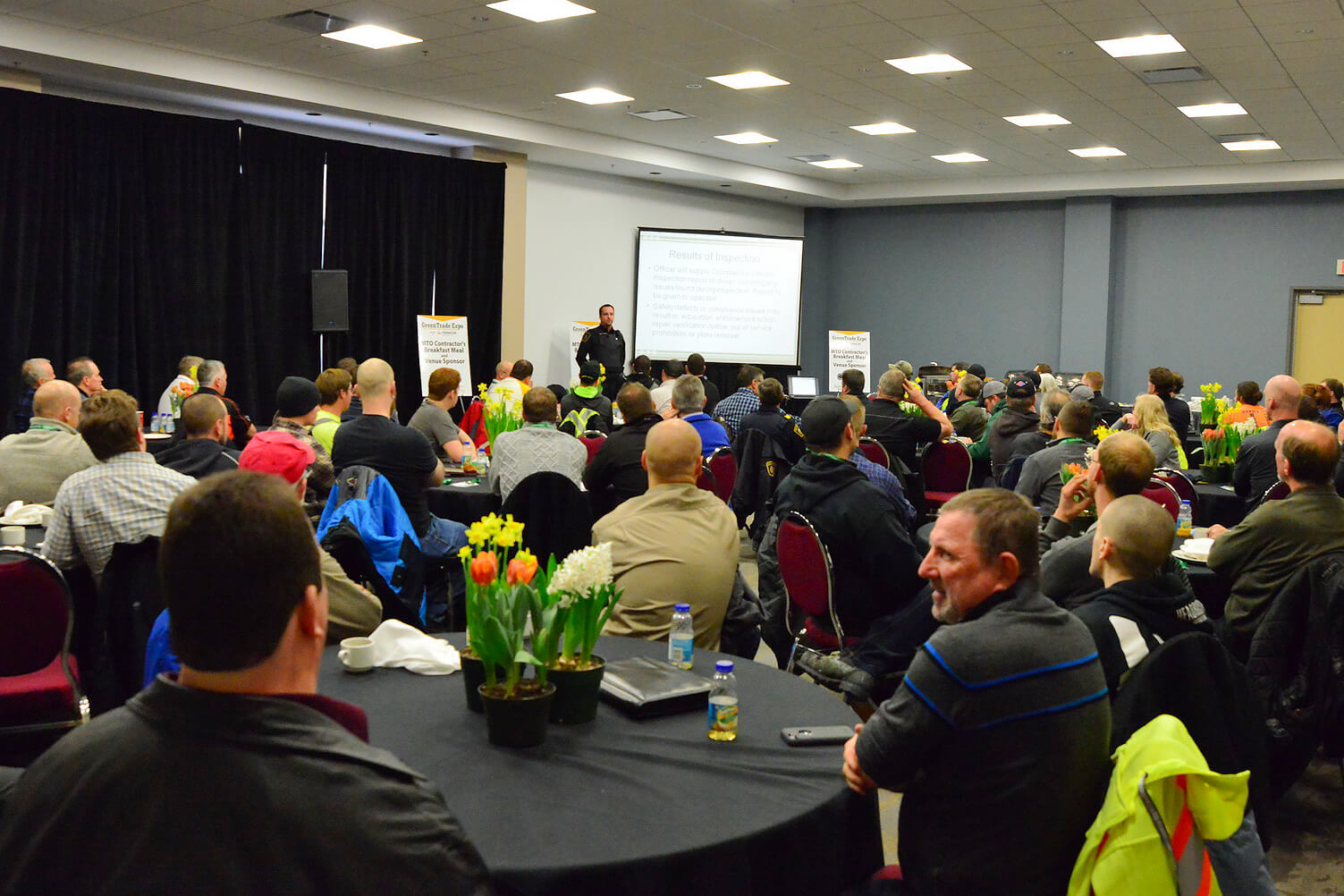 The ever-popular MTO breakfast continues to draw a large crowd.