Just a few weeks after the Occupy Toronto movement was removed from St. James Park, another occupation took place. This time it was over 150 volunteers from the landscaping industry who descended upon the park for two days to restore the original beauty to the three hectare site.

In just two short days, Dec. 7 and 8, the park was cleaned, compacted soil was aerated and amended, mature trees and shrubs were pruned and mulched and fresh sod was laid throughout the entire park. The approximately $60,000 in materials and labour came at no cost whatsoever to Toronto taxpayers. It was all generously donated by companies and individuals from the green industry.

“Shortly after the encampment, the park was basically all a big mud pit,” says local business owner Rachel Young, who co-founded The Friends of St. James Park community group. With the occupation, local residents and businesses could not use the park, which Young says is vital link for the members of the local community. “It is such a blessing to have help arrive to revitalize the park,” concludes Young, who claims, “The park is one of the best gems in the city.”

What many of the surprised local residents didn’t know was the huge effort to rebuild the park was organized in just a few short days after the city called out for help (see Executive Desk column, page 28). Director of Parks for the City of Toronto Richard Ubbens said that after the initial clean-up of the park was done by city employees, “It was very apparent right away the ground had been severely compacted.” It was obvious that what turf remained needed replacing, and soil amenities and aeration were also required. 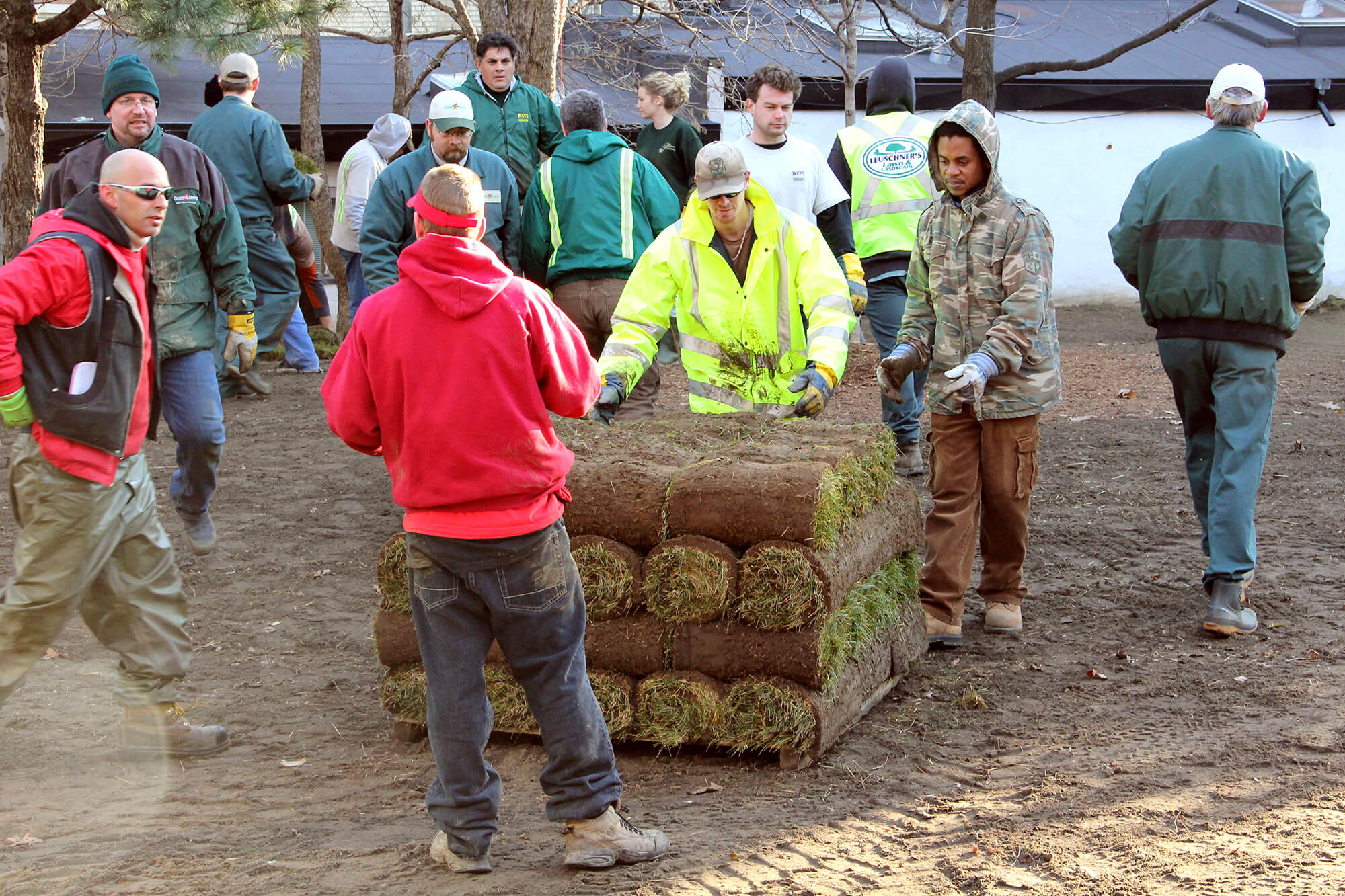 Sod disappeared quickly as crews emptied the skids just after being placed on the ground. The entire sod laying process was completed in less than a day on St. James Park’s three acres. When the job was complete, Ubbens was asked about his thoughts on the job the volunteers had done. “Amazing. That’s the professionalism of the trade coming through. The residents and the local businesses are just thrilled.”

The city looked into the costs of replacing the turf via three methods: seed, hydroseeding and sod. The preferred method of sod also came with the hefty price tag of $66,000. This amount was not allocated in the department’s budget. Parks and Environment Committee Chair, Norm Kelly, turned to the media to put the word out for help, and offers started coming in from various companies willing to donate materials. “One of the three credible offers that came in was through Landscape Ontario,” said Ubbens.

The offer from Landscape Ontario came about after a casual conversation between two of its members. “This is a classic example of a small idea that just blows up into something massive,” says Kyle Tobin, president of LawnSavers Plant Health Care, Concord,and one of the people involved in that initial conversation. “We’re the true green people in the world. This was the perfect opportunity to showcase the professionalism of our industry. In less than two days, it actually got built and it got built right. This place is going to flourish for years and years to come.”

After a few phone calls and some group emails, the call to action was put out to members of the landscape and sod industries. They soon joined forces and acted quickly to pull off a two-day clean-up and restoration of the park.

Alan White, owner of Turf Systems, who was also part of that initial conversation with Kyle Tobin, Burlington, was at a loss for words when trying to describe the state of the park upon his first visit a few days before the restoration. “It was similar to seeing a forest that has been cut down,” says White. “This park had no green at all. There was no significant damage to the trees, but the carpet of living turf here was destroyed. That was the biggest shock value when I visited the site. It was beyond the point of bringing it back, so there was only one solution.” 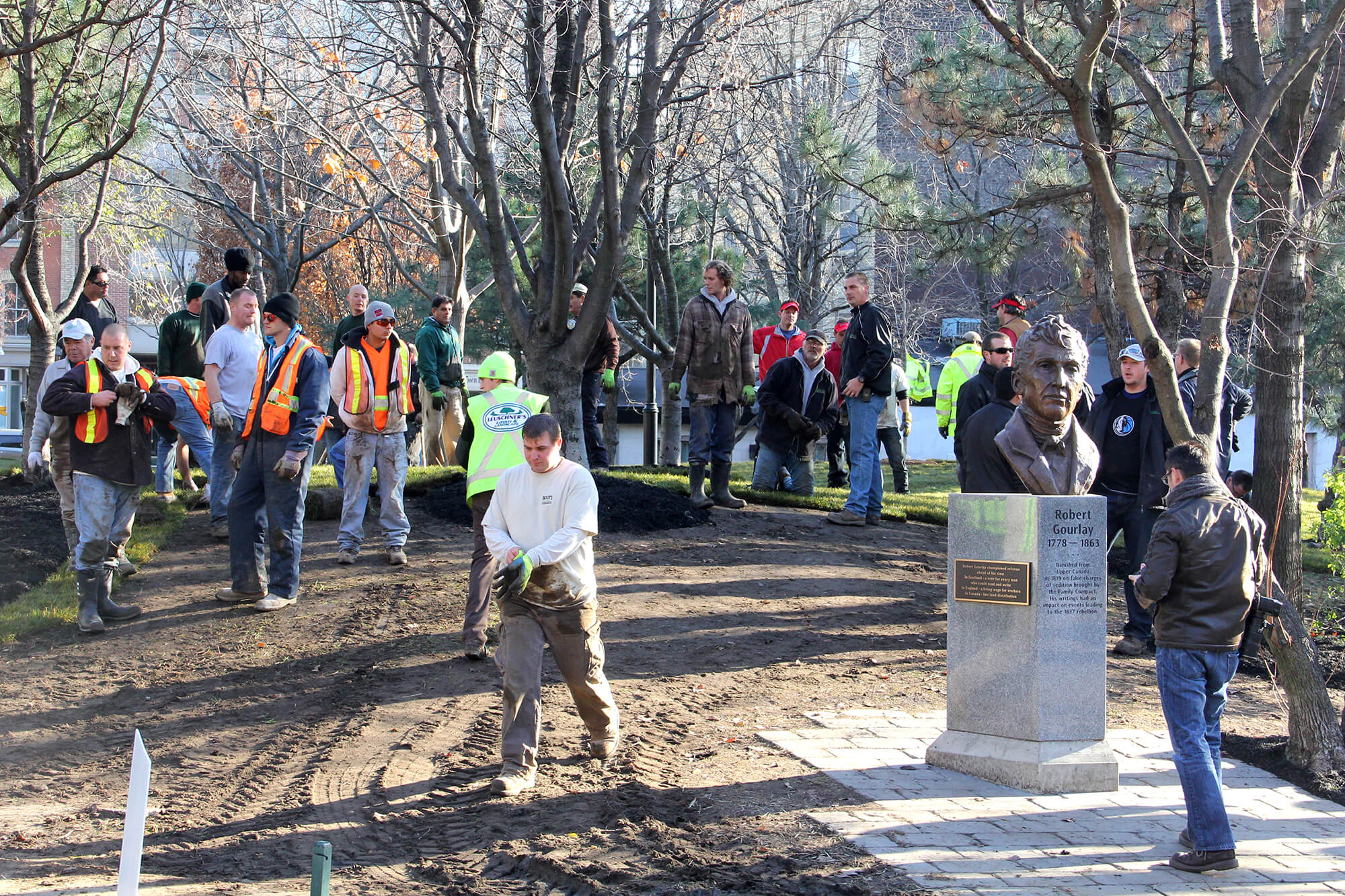 An army of volunteers made quick work of the sod laying process. After the word was put out to the industry, within a few hours momentum rapidly grew for the project.

Claus Zander, vice-president of Zander Sod, was one of the many volunteers whose company also donated material to the project. “As a member of the Nursery Sod Growers Association, we donated a trailer-load of sod, just as many growers did to help restore this park and bring nature back into the city. Turfgrass is great for the environment and it’s great to see so many volunteers out donating both the product and all the labourers helping out here to restore the park.”

One of the many volunteers, Susan Antler from the Compost Council of Canada, said “Landscape Ontario has been so good to the Compost Council of Ontario and they always come to our rescue, so it’s time for us to give back as well. This was a really great opportunity. Everyone coming together is just so typical of members of Landscape Ontario and the Nursery Sod Growers Association.”

Local residents Hilda Whincup and Mike Elliott stopped by during the construction with some special baked goodies for one of the event organizers. “Having the park fixed up like this after it was in pretty sad shape a week ago is an amazing thing,” said Elliott. “We are really grateful for all of the work Landscape Ontario members and the Sod Growers have done to fix up the park. It’s a real community asset. This is our front lawn, and now we have it back.” 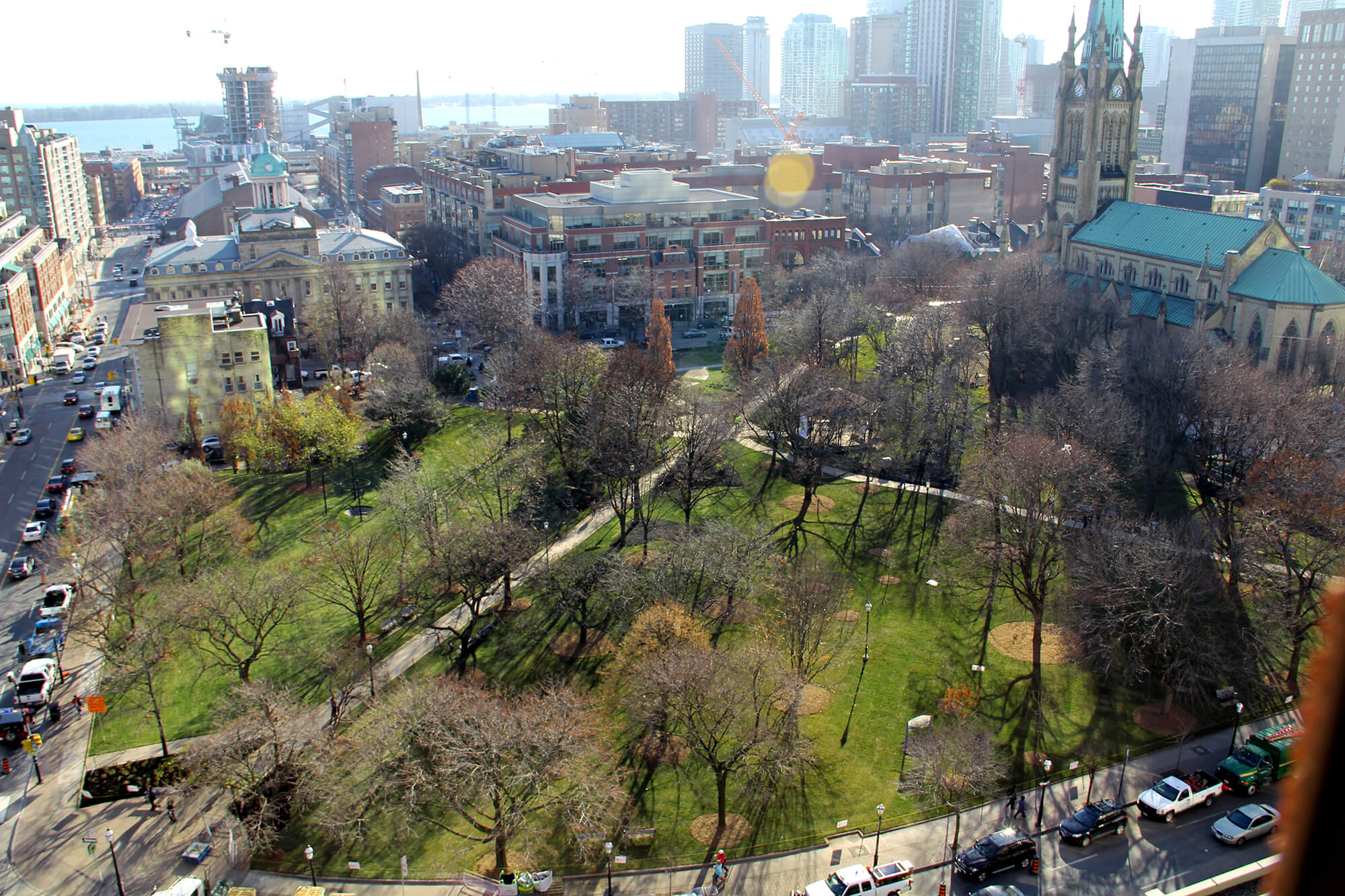 An overhead view of the completed St. James Park. “I just find it a wonderful experience to see this transformation of the park back to its original beauty just before Christmas. It’s just unbelievable to see this and to see everyone pitching in to help out,” commented Beaches resident Richard Anstett.

Landscape Ontario has received dozens of emails and thanks. A written comment by local resident Heidi Umstadt stated, “You have no idea how happy I was to see your people at St. James Park this morning, laying new sod. I almost cried! I love this park! It’s so beautiful in the spring, when the first tulips and spring flowers are blooming and as a neighbourhood resident, I am so glad to see it being restored. Thank you so much and BIG HUG to the volunteers for all their hard work and for making this possible.”

Alan White was quick to point out, “We are going to come back in the spring and make sure this revitalization has the leg up it needs to carry through next summer.”