A Japanese garden bridge connects some of the more than 15 km of trails in Hatley Gardens.
Share
Tweet
Mail

The Butchart Gardens is probably Canada’s most well-known horticultural attraction. However, about 20 km to the south on the west shore of Greater Victoria are the gardens at Hatley Park — a national historic site that today encompasses Royal Roads University.

Kishida had come to Victoria in the early 1900s, at the invitation of his son and a business partner, to design a garden to accompany a Japanese tea house at Gorge Park in nearby Esquimalt. Attending a garden party at Gorge Park were Jenny Butchart, the visionary behind her namesake gardens, and Laura Dunsmuir, the wife of former B.C. Premier James Dunsmuir, who had bought the Hatley Park property just a few years prior. While Greater Victoria’s two most celebrated gardens share a similar origin, they evolved into vastly different entities a century later.

“We don’t want to be another Butcharts,” Allison said. “One of the comments that I get from most visitors is that this is a gardener’s garden. Butchart Gardens is a great entertainment garden.” 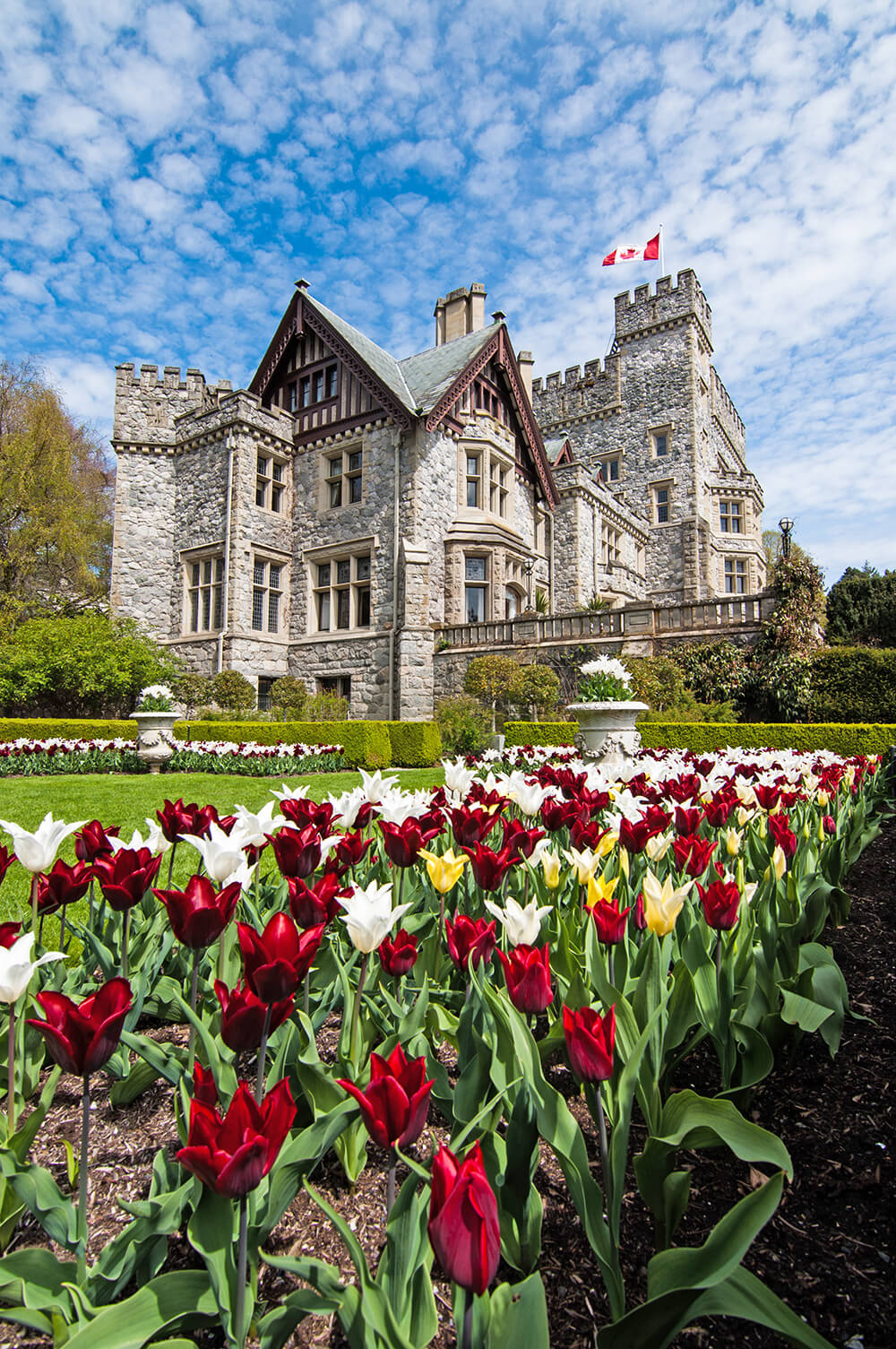 Hatley Castle
Hatley Park, and what Allison is responsible for, encompasses much more than gardens. The estate covers more than 565 acres, including more than 15 km of trails that wind through forests of cedars and Douglas firs up to 900 years old.

The historic site also includes Garry oak meadows, a migratory bird sanctuary at Esquimalt Lagoon, Italian and rose gardens, campus gardens, and Hatley Castle, which has appeared as a backdrop in blockbuster movies like the X-Men films and Deadpool, as well as the MacGyver TV series in the 1980s.

“There are probably more people in the forest right now walking their dogs than there are in the gardens,” Allison said during an interview under the shade of a loggia bordering the Italian garden.

All that activity poses challenges for Allison and his crew. When he started at Hatley Park 23 years ago, they mowed as necessary. “And nobody ever said ‘shut that machine down,’” Allison said. “Now it’s the opposite.”

For his staff of 14 that includes five seasonal workers, it means a lot of operational MacGyvering, such as protecting the wisteria from the turbulence of helicopters or preventing “the irrigation system from going on and soaking Johnny Depp,” Allison quipped.

One way Allison and crew have kept the noise down is by utilizing electric tools, such as a self-propelled, 56-volt Ego brand mower that horticulture crew member Neil Ross is using on the turf in the Italian garden. “It’s great,” said Ross, who has worked seasonally at the site for about eight years. “Other electric motors I’ve used, when you hit something tough it powers down. But this guy actually powers up and keeps going.”

It’s the beauty and heritage of the site that keeps him coming back, Ross said, as he takes a break with historic Hatley Castle in the background. James Dunsmuir hired famed Victoria architect Samuel Maclure in 1908 to build the castle. In doing so, Dunsmuir followed the lead of his coal baron father, Robert Dunsmuir, who some 20 years earlier had commissioned United States architect H.H. Richardson to design Craigdarroch Castle in Victoria.

After James and Laura Dunsmuir died, the Canadian government purchased the Hatley estate in 1940. For the next five decades, a military college, under various names, operated on the site, culminating with Royal Roads Military College, which closed in 1995. Almost immediately, the B.C. government established the civilian Royal Roads University, which continues to this day.

The heritage of Hatley Park long predates the university, military college or the Dunsmuirs, Allison pointed out. Local First Nations people — the Xwsepsum (Esquimalt) and Lkwungen (Songhees) — lived in the region for thousands of years.

“If you see Garry oak meadows for sure the First Nations have had something to do with it,” said gardener John Kwaksistala, who is of Songhees and Wei Wai Kum ancestry, the latter from Campbell River on northern Vancouver Island.

His work at Hatley Park is diverse. On this day, he’s building a rock wall.

“When you’re a gardener or a landscaper, you deal with pretty much anything that’s in the ground or in the garden,” Kwaksistala said. “So you do anything from irrigation, drainage, hardscaping, softscaping, landscaping, playing with tractors, dump trucks, excavators — all that kind of stuff.”

Kwaksistala previously worked in construction, but despite the good money he got sick of being around concrete and seeing trees cut down en masse. “Because I’m First Nations, I needed to do something with Mother Earth, nature, ecosystems — something like that,” Kwaksistala said.

So he took a horticulture program, which led to the job at Hatley Park.

“I started seeing past the buildings and past concrete in the streets, looking to the trees and the forests and the mountains and beyond what’s just directly in front of me,” he said. “Take a look. Trees and greenery are everywhere. And we need more of it.”

Kwaksistala’s boss, Paul Allison, is equally enthusiastic when it comes to horticulture.

“Green is in the middle of the spectrum,” Allison explained. “That’s why it’s relaxing and balancing.”

Green is also the predominant colour of the Japanese garden. Its lower part — Allison’s favourite — was designed years after the original by Tadashia Noda. Originally from Hiroshima, Noda oversaw the Japanese garden from 1913 to 1927.

Allison himself has designed gardens on three continents. A gardener for more than 50 of his 63 years, he explained it’s a calling rather than a career. Originally from Cornwall in the United Kingdom, Allison also spent his winters in Japan, teaching in the landscape architecture program at Tokyo Agricultural University for about a decade during his early years at Hatley Park when he was a summer gardener. 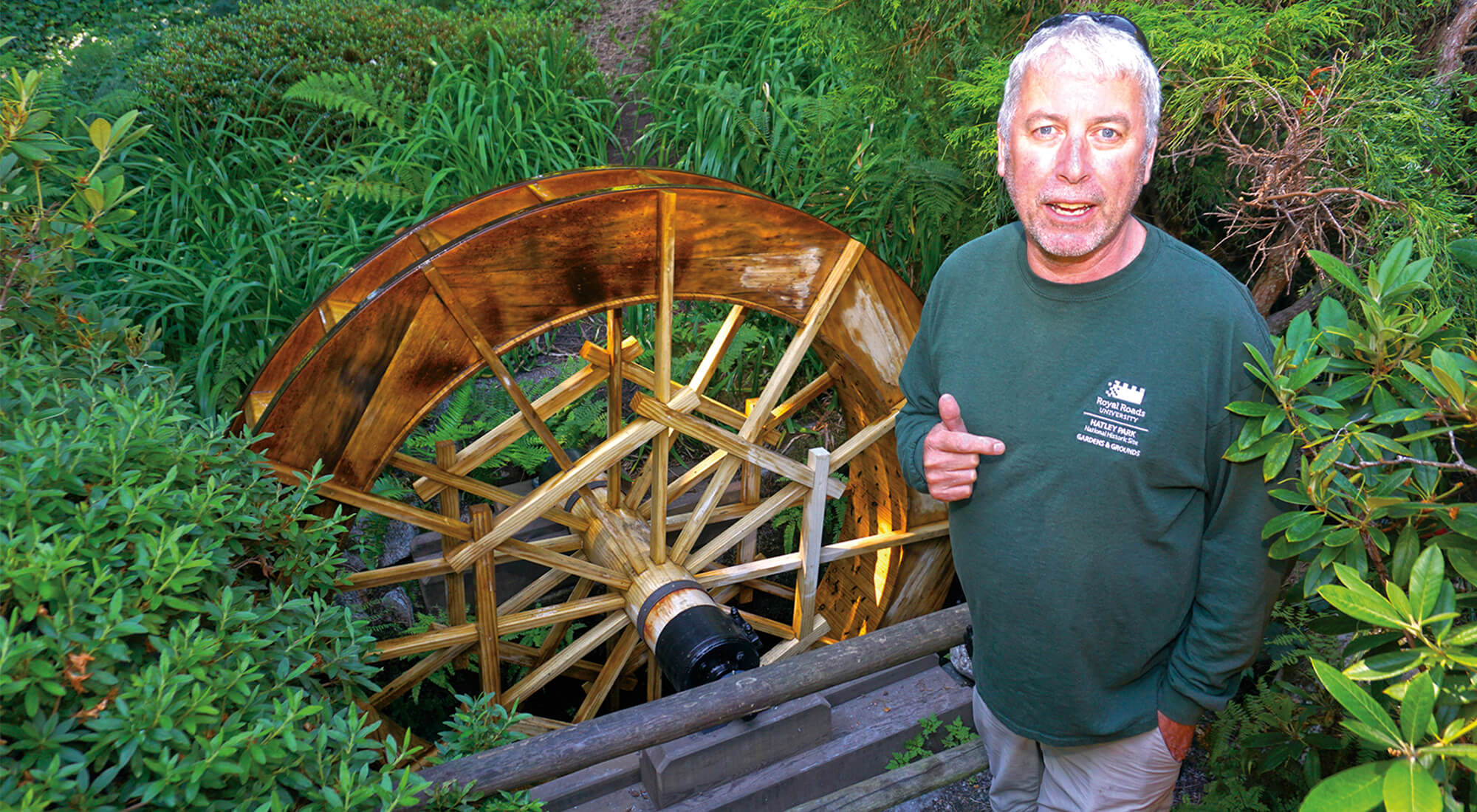 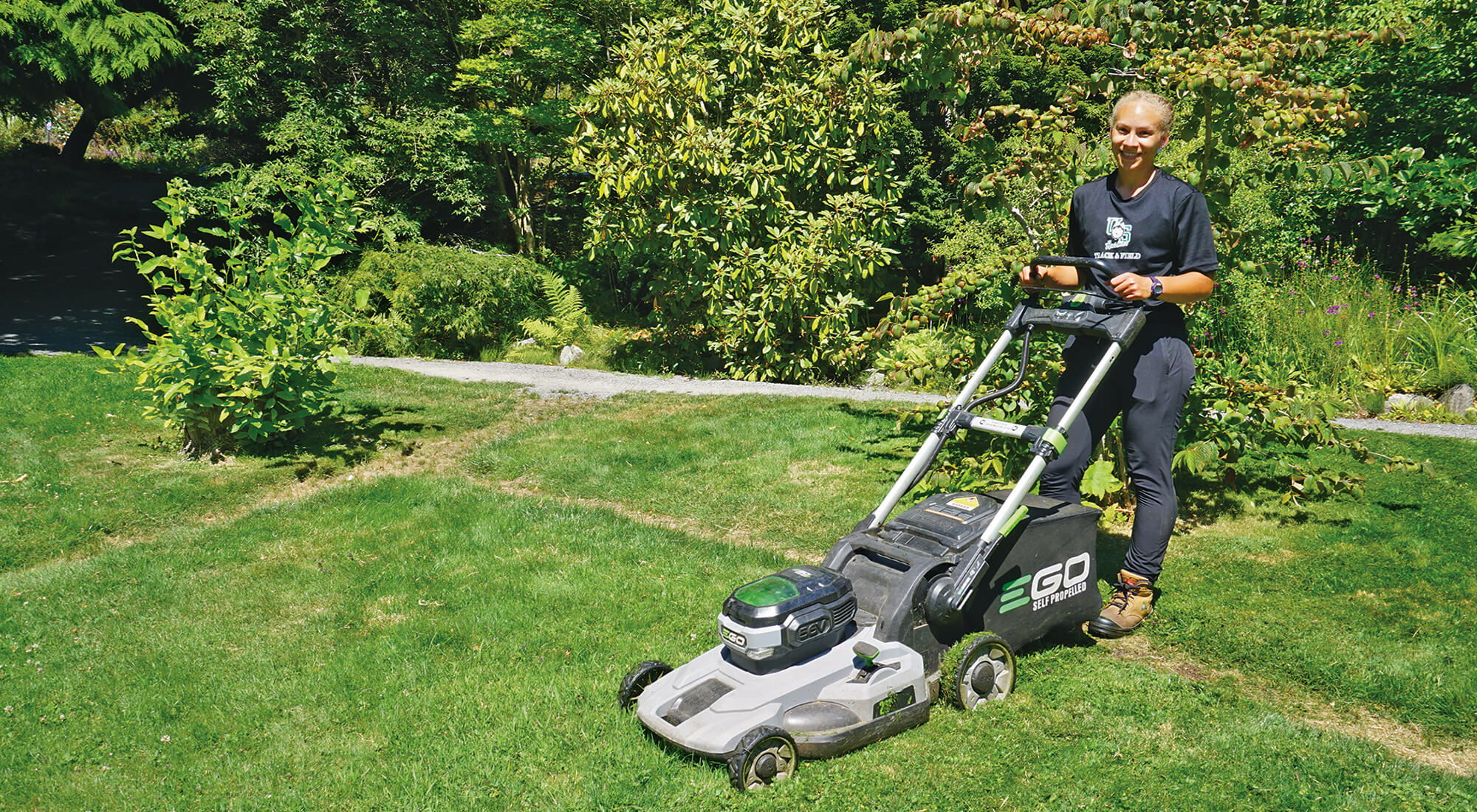 One of his last projects in Japan was helping survivors of the 2011 Tōhuko earthquake reintegrate into nature by encouraging them to grow small gardens.

Allison still teaches, but mostly to MBA students about the “nature” of business. Even then, he invokes what he learned about how the Japanese character for busyness, the kanji, “means to lose one’s heart.”

“If you’re going to be a good businessman, you need to deal with self care,” Allison added.

When teaching, he always asks why people create gardens. Yes, it’s about therapy and connecting with nature, he admits. But it also relates to the Savanna Hypothesis of American ecologist Gordon Orians.

“Our ancestors were looking at the Savanna, which was low-growing grasses, meandering paths or streams, small trees like acacias with branches close to the ground, so we can get in either escaping from the lions or looking at the water hole,” Allison said. “Flowers to our ancestors would mean basically reproduction.”

While the lawns are manicured with electric mowers and trimmers, other parts of the grounds are left to nature in order to preserve the heritage trees. “Somebody might say, ‘Why do we have all these tall grasses?’ It looks like we’re neglecting mowing an area,” Allison said. “And we have to educate everybody and say, ‘No, that’s a Garry oak meadow.’”

As part of its lease with Canada’s Department of National Defence, the university must meet stewardship requirements that include preparing full inventories of plants, trees and structures in the gardens and grounds, and establishing a nursery system to preserve the genetic stock of the heritage trees.

An example of the genetic preservation efforts is a Japanese umbrella pine tree that grew from a seed planted by Kishida’s great grandson. That seed came from a tree originally planted in 1910.

Parry, who joined Hatley Park in the spring of 2021, said the university has applied for grants to assist with the work, but will go ahead with it regardless. That will include propagating beech, tilia and 100-year-old cherry trees, as well as bulbs of native fawn lilies (Erythronium oregonum) and rhododendrons inside and outside of the Japanese gardens.

“And if I can go into the collection, find them and find the age of them, we will propagate those,” Parry said. “If we do nothing and don’t have any gene source going forward, once they’re gone, they’re gone.”


All about the water

“It’s all automated,” Parry said of the irrigation system. “And as long as we can keep an adequate amount of moisture in the soil, the roses will keep on blooming.” That six-week cycle begins in the spring and can continue until December, he added.

Hatley Park draws most of its own water from the Langford aquifer, so it doesn’t have to depend on Victoria’s regional water supply. Even in sweltering July heat, a spring from the aquifer bubbles from the bottom of a large pond in the Japanese garden. The aquifer is so prolific that the grounds often require additional drainage. “We could be in the middle of a drought and all this water would run down,” Allison said.

A century-old fish ladder made of concrete and stones also aerates the water.

“You’ve got water in so many different forms — the lagoon, the ocean, the fish ladders, the creeks, the ponds,” Allison said. “And then you’ve got this huge diversity of forest and different plant material and the nature that goes along with that. What really makes this kind of special is the balance and harmony of so many different things and the buzz of biodiversity that is here.”

During the interview, Allison occasionally stops visitors from the gardens to ask their impressions.

Allison explained later, “I’m always curious what their perception is. If I had more time, I would say, ‘Why do you like the rose garden?’ Because it’s all sensory data coming in.”

Allison reveals that he has coined a name to describe his calling. “I’m a jardinist,” he said “and a jardinist is using horticulture for political and social change. You won’t hear that anywhere else because I only just created it.”