Ginkgo is truly a tree worth planting for future generations

I have seen ginkgo grow out of the gangly youth stage, and approach the loveliness of the well-branched maturing tree.

A mature ginkgo can be stunning. I did not quite appreciate this until I saw the 200-year-old wonder at the Pisa Botanical Garden. It is a joy to behold the ancient ginkgo with its massive trunk and giant canopy. Ginkgo biloba is truly a tree worth planting for future generations.

Prehistorically, ginkgo grew throughout the world. It could even be called an Ontario native, since fossils have been found here. You can touch ones many millions of years old at the Petrified Ginkgo Forest, near Vantage, Wash. These ancient fossils reveal a tree the same as the one planted today. As far as we know, ginkgo grows only in cultivation, though there is a hilly spot in China where the population may be wild.

The shape of a ginkgo changes as it ages. Young trees are often described as gangly, with a very open branching. This irregular habit arises from branch buds that grow one mm per year for up to a decade, and then one year grows 30 cm or more. As the tree ages, branches fill out and form a pyramidal crown. How full a tree becomes will vary with growing conditions and age. For a tree that can live hundreds of years, maturity comes slowly.

The distinctive two-lobed leaves are a rich green which turn to a stunningly wonderful golden yellow colour in autumn. This pleasure may be short-lived, as a sudden hard freeze may cause the leaves to drop in just a few days. There are virtually no insect or disease issues on these thick, uniquely veined leaves. They also feature prominently in herbal remedies, such as memory enhancement. 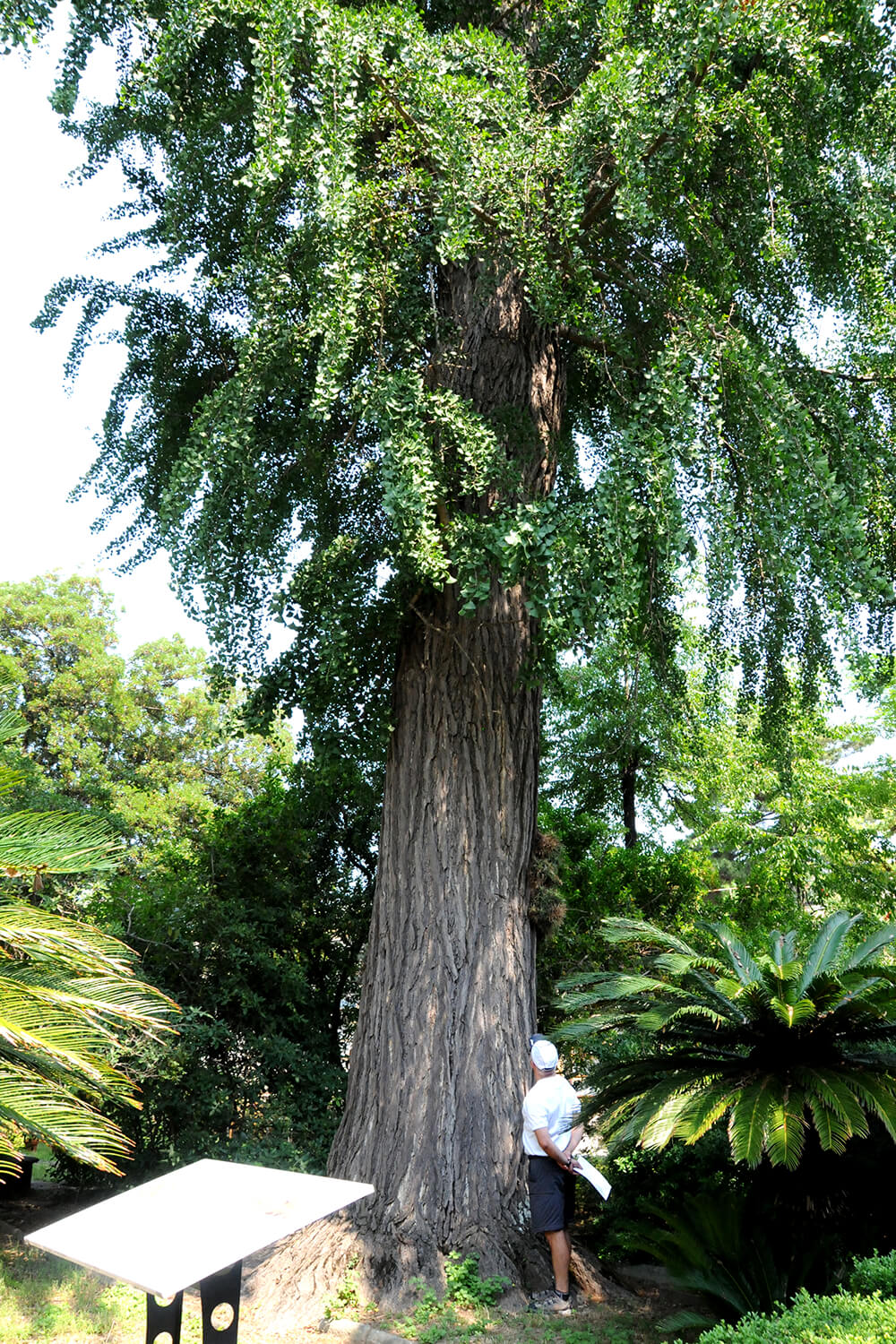 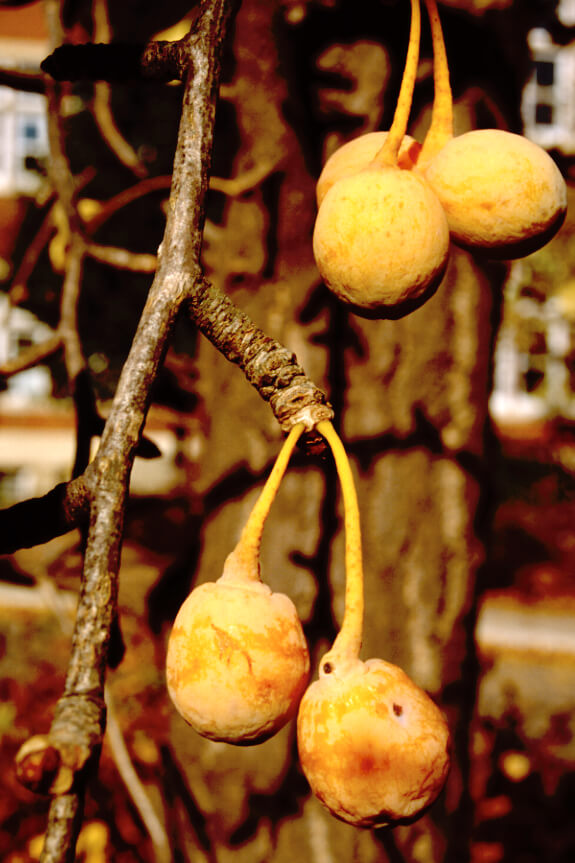 Fruit of the ginkgo.
Also known as the maidenhair tree, it is very tolerant of many urban soils and poor air quality. Establishment will be slow in poor conditions, but when provided with adequate moisture and fertile soil, young trees are easily transplanted. With few disease problems, ginkgo are normally very long lived. There are trees in China thousands of years old.

Ginkgos are dioecious; there are male trees and female trees. Flowers are inconspicuous and fragrant, but the fruit is definitely not.  Described as putrid, with the odour of butyric acid, the fragrance of the ripened fruit is regarded as one of the few negative aspects of this amazing tree. Detractors also complain that the fleshy covering of the seed can cause a slipping hazard on hard surfaces.

Planting a male avoids the fruit issue, but it takes more than 20 years for trees grown from seed to become sexually mature to determine male or female. The nursery industry has addressed this uncertainty by selecting male cultivars. In this era of changing urban forests this practice is being questioned.

Even though there are many being planted throughout the world, ginkgo achieved endangered status with the International Union for Conservation of Nature. The wide use of male clones reduces the genetic diversity of the species and that may make ginkgo vulnerable. But until seedlings can be accurately sexed (active research with both DNA testing and morphological markers is underway), perhaps the stinky fruit can be embraced for the valuable resource it is. Washing the smelly outer flesh reveals a delicious edible nut, both tasty and medicinal. The use of male clones could be limited to only where necessary.

Ginkgo biloba suffers little from disease and tolerates poor soil and air quality. Enjoy its lovely autumn colour and interesting leaf shape. Plant this live fossil in decent soil and watch it change shape to become the lovely ancient wonder that our great-grandchildren will enjoy.

This is the fourth in a series of articles highlighting 29 trees selected by the Landscape Ontario Growers’ Sector working group, as recommended alternatives to ash and Norway maple. For the complete list and factsheets on each, go to landscapeontario.com/trees-for-urban-landscapes.