Share
Tweet
Mail
In the late summer of 2018, box tree moth adults were detected in Etobicoke, Ont., by citizen scientists who posted photos online at iNaturalist and Facebook. Later that autumn, Ontario Ministry of Agriculture, Food and Rural Affairs (OMAFRA) and the Canadian Food Inspection Agency (CFIA) confirmed the presence of box tree moth larvae in an urban neighbourhood within the city. Box tree moth is a relatively new pest in Europe. This is the first confirmed report of box tree moth in North America. Box tree moth is not a regulated pest in Canada. The nursery and landscape industry partnered with various levels of government, including CFIA, to execute a large monitoring and outreach program for box tree moth in 2019.

In my 20+ years as OMAFRA Nursery and Landscape Specialist, I have seen the introduction of several invasive plant pests. However, this is the first pest find that I have experienced where we already have access to effective, registered biological insecticides (those products containing appropriate strains of Bacillus thuringiensis) and pheromone lures which are available thanks to Quebec-based supplier, Solida.ca. It also helps that box tree moth is an open-feeding caterpillar and not a cambium borer.

The box tree moth is a species of moth in the family Crambidae, the “snout moths.” It is native to eastern Asia (Japan, China, Taiwan, Korea, the Russian Far East and India). It is an invasive pest species in Europe. All species and cultivars of Buxus are believed to be hosts for box tree moth. It is possible that the moth may feed on Japanese spurge (Pachysandra terminalis), although the moth prefers to feed on Buxus spp.

Fortunately for Ontario, the moth has been found in a limited residential area of Toronto which can be delineated by Steeles Ave. to the north, Leslie St. to the east, the Gardener Expressway to the south and Highway 427 to the west. In 2019, pheromone-baited traps were placed in residential landscapes across the province, from Windsor to Ottawa. Only traps found in the Toronto area within the above-mentioned zone were found to contain box tree moths. Box tree moth has only been found in residential landscapes. It has not been detected at, or near any wholesale nursery farms. 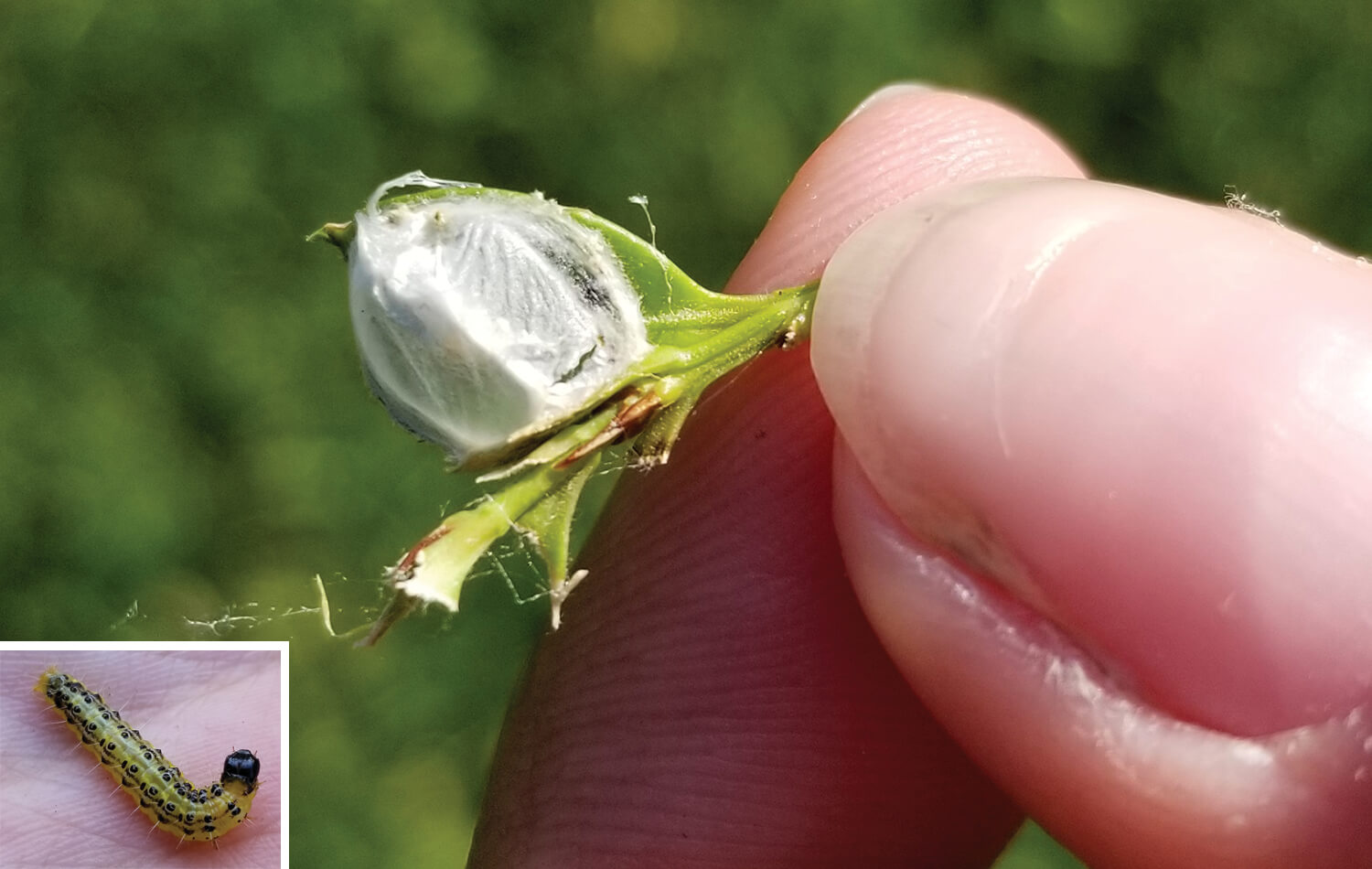 Box tree moth larvae overwinter inside a webbed hibernarium in late September to early May.

If you are scouting for box tree moth in winter or early spring, you will need to look for individual leaves that have a small visible white cocoon (called a “hibernarium”) or individual leaves webbed to another leaf. Pull those leaves apart and look for a webbed hibernarium. Use your fingernail or a knife tip to tease away some of the webbing. If you find a tiny green larva with a black head, that is box tree moth (about 4-6 mm long). If you find eggs, that is a spider nest.

When temperatures become warm in mid-late May, overwintered early instar larvae will venture out of their hibernarium to feed on surface tissue of the leaves. Young larvae have small heads and mandibles and are only able to feed on the epidermis and shallowly into the underlying mesophyll. Note the webbing and frass amongst the chewed foliage and twigs.

As larvae mature, they shed their skins (molt) to increase in size. Larvae become more greenish and develop a striking pattern of thick black stripes along their body. They have a larger set of mandibles and can consume entire portions of leaves, quite often leaving just the epidermis behind. Note the webbing and frass amongst the chewed foliage and twigs. The larval stage of box tree moth feed on the leaves and this stage can last 14 days.

Adult moths have white coloured wings with brown margins. Adults live about 14 days and can potentially disperse seven to 10 km. During the day, they can be found resting on host plants or other surrounding plants. Female moths will lay tiny, flat yellow eggs on the underside of host leaves, usually in a cluster of about 10 to‐20. The eggs hatch after about three days and young larvae feed on the underside of the leaves and produce webbing and frass.

In 2019, we observed only two generations of adults, the first in the beginning of July and the second mid-August. In Europe, three to five generations of box tree moth can be observed, with adults on the wing from April/May to September. According to the literature, box tree moth overwinters as a juvenile cocooned larva in a hibernarium against boxwood leaves, which is what we found in Etobicoke. In addition, we also recovered some pupae from the positive sites in early spring, and I am pleased to tell you that none of the overwintered pupae were found to be viable. 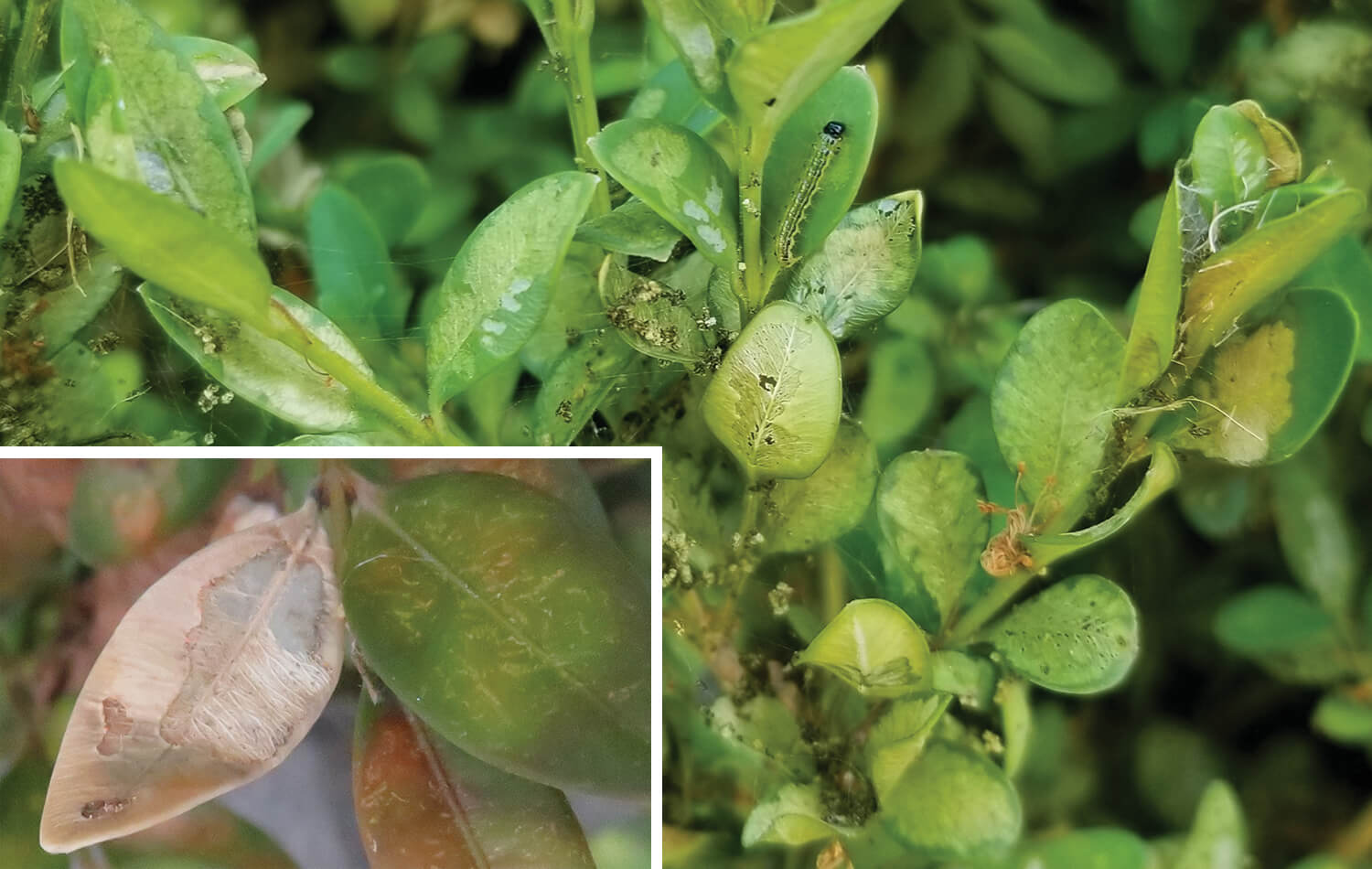 Early instar larva and feeding damage, note how only one side of the leaf is chewed and just from the surface. This tissue becomes desiccated and will turn light brown, appearing like the inset image.

Box tree moth larvae can be effectively managed with a safe biological insecticide (Dipel 2X DF PCP#26508), a product already registered for use in Canada. In fact, this is the same biological insecticide that is applied by air over the City of Toronto to combat Gypsy moth larvae in the spring. Dipel 2X DF contains a naturally occurring bacterium, Bacillus thuringiensis (B.t.), that when sprayed on the foliage, is consumed by the larvae as they feed on the leaves. Within an hour of ingesting the B.t. residue, the larvae stop feeding and then die within two-three days. Foliage needs to be retreated at least every 10 days to keep an effective layer of B.t. on the leaves during periods of larval activity. We found that one application per larval generation was usually enough to kill actively feeding larvae.

Keep in mind that in 2019, we experienced an unusually cold, wet spring that lasted well into the month of June. Where temperatures are warmer, we expect to see more larvae beginning the latter part of May. 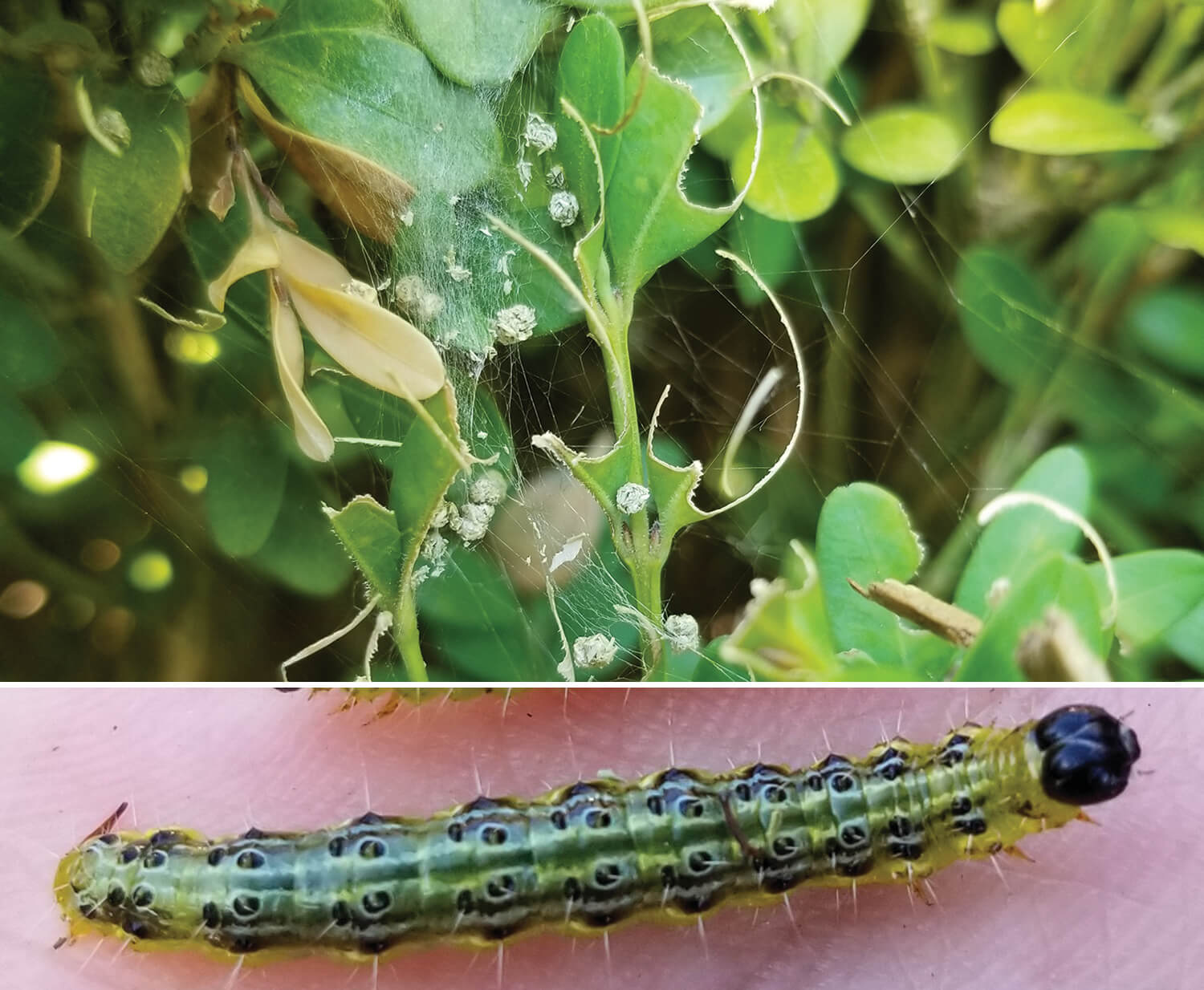 What you can do

Raising public awareness on the biology and detection of box tree moth is essential to help control and limit the spread of this pest. Talk to your clients about scouting for this pest on their boxwoods. Employ effective biological pesticide programs and do not move boxwood plants out of the infested zone in Toronto. Since box tree moth has not been detected at or near any wholesale farms and it is a manageable pest, continue to use Ontario grown boxwood with confidence. To help determine the extent of its distribution, we continue to ask that all stakeholders take and hold samples and photos of any moth-like pests they observe on boxwood plants. Email photos and to jennifer.llewellyn@ontario.ca. Sightings can also be reported online to inspection.gc.ca/pests or eddmaps.org/ontario. This information will assist in evaluating the threat and will help to direct the next steps for the industry.

To report a pest to the Canadian Food Inspection Agency: inspection.gc.ca/pests
Under “Reporting a Plant Pest” Click on “CONTACT US”