To find the District of Muskoka’s largest indoor garden centre, one must drive 42 kilometres west from Huntsville, along the meandering two-lane Highway 141.

After 20 minutes of doing this, you begin to ask yourself, how can a garden centre survive in what seems like the middle of nowhere?

A few minutes later, upon arriving at Windermere Garden Centre, in Utterson, Ont., it doesn’t take long to realize this business is more than surviving. As a matter of fact, it’s thriving to the point that this year, while celebrating its 35th anniversary, Windermere is opening a second location in Port Carling.

And, despite the impression of being in the middle of nowhere, it’s actually in the centre of cottage country paradise; the summer playground of the famous: Goldie Hawn, Martin Short, the late Ted Rogers, Eric Lindros, and more, on Lakes Rosseau and Joseph.

Owners Rick and Colleen Emmons are third-generation family members in the business. Rick’s parents, Joan and Marshall Emmons, brought their vast knowledge of horticulture from Welland. They had taken over Marshall’s father’s greenhouse business in the Welland area. The love of the Muskokas drew them to move, where Joan began working part-time in the small garden centre on Lake Rosseau that was owned by an older couple ready to retire. It wasn’t long before the purchase occurred, and the Emmons and their four children began operating their family business.

They started with two small hoop houses near Windermere, which became the site of the present-day garden centre. Now there are 15 greenhouses where the Emmons grow 80 per cent of the plant material sold at the garden centres.

Today the business includes Rick’s brother, John, who will take over the new Port Carling garden centre, under the name Windermere Garden Centre Too. Rick’s sister, Sharon Timms and their mother manage the office. 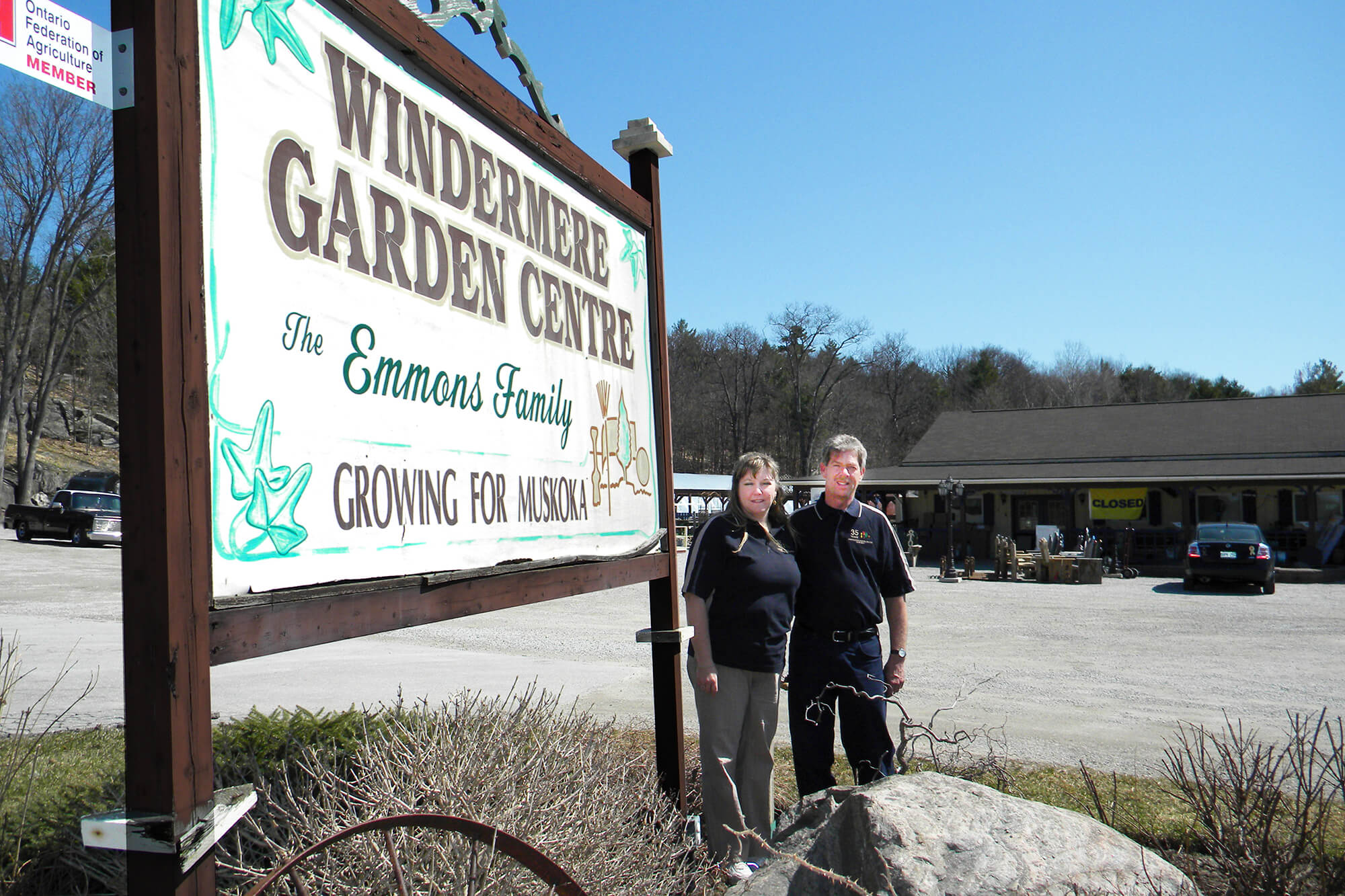 The attraction of high quality locally grown plants keep customers coming back year after year. “The fact that we can provide hardy plants grown in the same region (zone four) in which our customers will plant them, has been a real attraction for our clients,” says Colleen.

And, it’s not cheap operating greenhouses in Muskoka, with winters that see many days of -20°C and colder, heating is an expensive process. “We did heat with propane, but found that too expensive, so now we use oil,” says Rick. The garden centre is well off the beaten path of the natural gas line, so that isn’t an option.

Most of our customers hear about the garden centre through word of mouth,” says Rick. “They know they will receive quality plants that aren’t fertilizer junkies.”  Over the years customers have been split 50/50 between permanent residents and cottagers. The Emmons agree that the past year or two that ratio has changed to 70 per cent cottagers.

There is more to the business than the garden centres and greenhouses. Windermere Garden Centre also has two landscaping crews, three garden maintenance crews, two annual planting crews and a barge crew. Ya, how many garden centres in the LO family have a barge crew? But with the two above-noted lakes containing hundreds of islands with high-end structures, a barge crew is a necessity to move material and employees onsite.

The other unique aspect of landscaping in the Muskokas is the time of construction. Because clients use the cottages as summer retreats, the crews must have projects completed and ready before the client arrives for summer vacation. Rick Emmons points out that scheduling requires the renovation projects be done by late June. During the rest of summer the crews are kept busy on new construction, as the client can’t take a vacation until the new construction is completed. “It gets tricky scheduling everything,” says Rick.

The Emmons have a staff of 45, six of them year-round. To help fill in the winter months, they have developed a successful winter maintenance business and manufacture unique wooden garden benches.

Windermere Garden Centre has been a member of LO since 1988.

The Emmons family has found the secret of success is the same everywhere, even in the remote playground of the rich and famous:  provide quality product and good service at a fair price. It’s been a family tradition for three generations.
Share
Tweet
Mail