Win them over with service 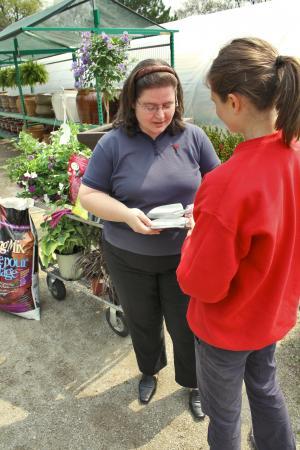 This spring has made it more apparent than ever that customers are starved for service. It is not a matter of poor service; it is more often a question of nonexistent service.

I am up on my high horse these days, over a couple of incidents in my life as a consumer. I had a new roof installed on my house two summers ago, with a five-year warranty included. At four a.m., one morning this spring, it began to rain in my upstairs hallway. It rained so hard that some of the plaster collapsed. I called the roofer. He told me that it was leaking because when I cleaned the snow off the roof this winter, I must have broken the seal on the flashing. "Okay" I said, "if it is not a warranty issue, will you at least make it stop raining inside my house? I will pay you for that work." He agreed he would but two phone calls later, no roofer. I hired a young carpenter who climbed up on my roof, assessed the damage, and rebuilt that section so I would have better drainage. He sealed everything up tight and even though I have had two more severe storms, my roof does not leak. Amazing that when I wanted a new roof, which by the way was $22,000, the roofer was much more civil in tone than when I needed a repair.

What I was asking for was to be looked after, and if it was not a warranty issue, so be it. And that is what most of us really want, to be taken care of by those who are supposed to be in the service industry.

Green industry is guilty
There are people inside our trade who do not grasp the concept of service. Those people work in all areas, both retail and wholesale. They just don't get it. They spend more time explaining to anyone who will listen, why it was not their responsibility to accommodate someone, than the time it would have taken to accommodate that person. One of their favourite phrases is, "I don't have time for this stuff," or, "If I did it for him I would have to do it for everyone."

Except not everyone is asking for this or that. There is no line-up of people asking for assistance at the door or on the phone. The line-up consists of one person, and they just turned that one person down. And now, that one person is not too pleased with how he was treated.

When I was first starting out in this trade of ours, I did some things well and it took me time to learn some lessons. One of those things that I did well at the beginning was that I listened to what customers told me. I had a well-known businesswoman come into my little garden centre. She was upset. She had been a loyal customer at the biggest greenhouse in our area, and now she was telling me that she would never set foot in that business again. What had happened that made her say this, with such intensity? She had asked the owner, another woman, if one of the staff would place a bale of peat moss into her trunk. She had recently had back surgery and could not lift anything heavy. The owner told her, "We don't have carryout service here." An argument developed and she was now in my first-year operation. I figured it out: All I had to do to earn and to keep this woman's business was to load a bale of peat moss into her car trunk. Simple?

Anything you want
One of my favorite stories regarding customer service (and I have written this before but it bears repeating) was at Calories Café in Saskatoon. It was a Sunday morning and my wife did not see anything on the menu that appealed to her. She asked our server if she could have one egg, one piece of bacon, one piece of whole wheat toast, half a grapefruit and a cup of herbal tea. The server said with a smile, "You can have anything you want." Contrast that with many other places that actually post 'no substitutions.' I, as no doubt you, have witnessed servers who were so inflexible that arguments broke out across the aisle.

Service actually sells. It sells your product on that particular day but more importantly, it sells your place of business. If you provide good service to a customer, she will be imprinted and drawn back to your establishment again and again.

I deal with a men's wear store that is one of the last holdouts of old-school service. I took in my suit jacket. There was a small problem with the left cuff. The assistant manager actually ran it over to the tailors, two blocks away, had it repaired, and then ran back with it. Total elapsed time was under twenty minutes. He could have as easily told me to come back in a week and I would have done that.

I have been making my rounds of the local greenhouses this spring as well as the box stores. At one of the independents, the owner is front and centre, selling to his customers. He shows them his new introductions and provides advice. The sale is rung up and he does not stop there. It is loaded into the customer's car. Not surprising, in spite of a wet and cool spring, this man's greenhouse has had good sales. He has a loyal clientele who shop with him no matter what the weather. He put it best by saying, "I have always looked after my customers and they have always looked after me." The man recognizes the returned benefits of service.

Not too far from this independent, there is a major box store. There I was, doing my undercover bit, playing Joe Customer. I engaged one of the staff. To her credit, she was very personable and willing to assist me. But her role was a tag reader. I would ask a question and she would read the tag to me. I asked her how long she had been working in the greenhouse and not surprisingly, she said it was her first year. She knew that hostas and impatiens grew in the shade and that marigolds and petunias were for the sun, but after that, she ran out of gas. And it was not as if she were a junior, starting out, supervised by an experienced sales person. She was it, the one and only employee working the floor.

The box stores have a great reluctance to provide training for their garden centre employees. The box store managers view their seasonal employees more as a commodity than as an asset. And if the employees are a commodity, why would you invest any time or money in them?

Commitment to training
Contrast that with my wife's volunteer position at our historic Government House here in Regina. They hold training seminars for all volunteers, teaching them how to work in the museum, how to address tourists, and what is expected from them. They have a tea room that is staffed by volunteers and prior to being allowed to serve visitors; volunteers are instructed on the proper way to carry out their duties. The question begs to be asked: If a volunteer-run historic site believes in training, why not a commercial operation?

My second negative experience as a customer recently was with two major corporations, Lexus and Michelin. I called my Lexus dealer and reported a suspected problem with one of my front tires. I was told that I had probably damaged the tire myself and this opinion was offered, without the service rep having seen the tire. I asked, if the Lexus dealer would not look after my problem, then whom? I was instructed to contact any Michelin dealer and they would take care of it. I did that. I contacted two Michelin dealers. Neither wanted anything to do with my tire problem because they had not sold me the tires. Interesting enough, both of the Michelin dealers were quite willing to quote me a price to install four new tires. According to one dealer, even though I have less than 40,000 km on my tires, they are practically worn out.

It was a similar situation as had occurred with the roofer at the beginning of this column. If I had indeed damaged the tire, so be it. I would pay for that damage. What I could not comprehend was, that I needed new tires all way round according to these two dealers, and no one would address the warranty claim. I was entitled to be accommodated, to have a much better level of service. Had I not paid in advance for this level of service? Do I have to write in block letters my answer as to whether Lexus or Michelin will be getting another purchase from me?

The race to the bottom is over. The customer is starved for service. Those garden centres, greenhouses and contractors that provide what the customer wants and in reality, what they need, will be successful. Service is the road to success. Rod McDonald owned and operated Lakeview Gardens, a successful garden centre/landscape firm in Regina, Sask., for 28 years. He now works full-time in the world of fine arts, writing, acting and producing in film, television and stage.
Share
Tweet
Mail