White Russian is a new petunia from Proven Winners.

For professional gardeners and landscapers out there, 2012 promises a bright selection of new and reliable bedding plants and perennials to try out. Based on our trial results in Guelph, Milton, Vineland and the Royal Botanical Gardens, here are a few suggestions of plants worth trying in the new year.

New Guinea impatiens (NGI)
These are often called sunshine impatiens, but in reality, it does best under conditions of part shade to part sun, and should never be allowed to dry out.

This year, for the first time ever, we had the Sunpatiens series of NGI from Sakata in the trial gardens. This series has been around for a number of years, but new colours are constantly being added and different levels of vigour are selected as well. The relative vigour of this series was one characteristic that stood out when compared with other NGI cultivars.

Some in the greenhouse industry find this plant challenging to grow because of its rapid growth rate. This same characteristic makes it an ideal selection for use in the landscape. The height and spread of these plants (up to 28 in. x 36 in. for Vigorous Magenta) gives it the ability to readily fill in ground space in containers and beds. This extreme vigour has prompted Sakata to come up with some more compact types with heights only of 14-20 inches, making it still ideal for the landscape.

Osteospermum
In the past was commonly called cape daisy. It had the reputation of only blooming well under the cool conditions of spring and fall. Consumers would purchase these beautiful, bloom-covered daisy-like plants from garden centres in the spring, only to have the bloom fail as the heat of the summer advanced. Breeders have done well by including heat tolerance into some of the new offerings.

One example of this, the 3-D series of osteospermum from Selecta did very well in the 2011 trials. The 3-D refers to the fact that the traditional blue button of disc florets in the centre of the daisy has been replaced with petals, giving it a doubled anemone flower form. 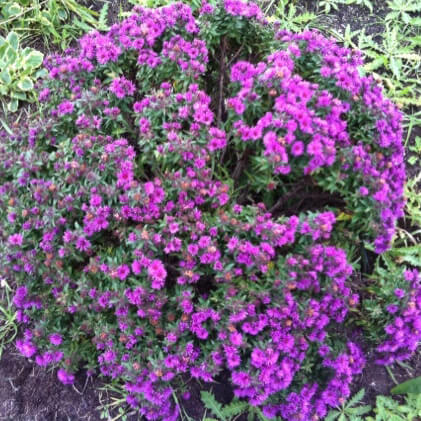 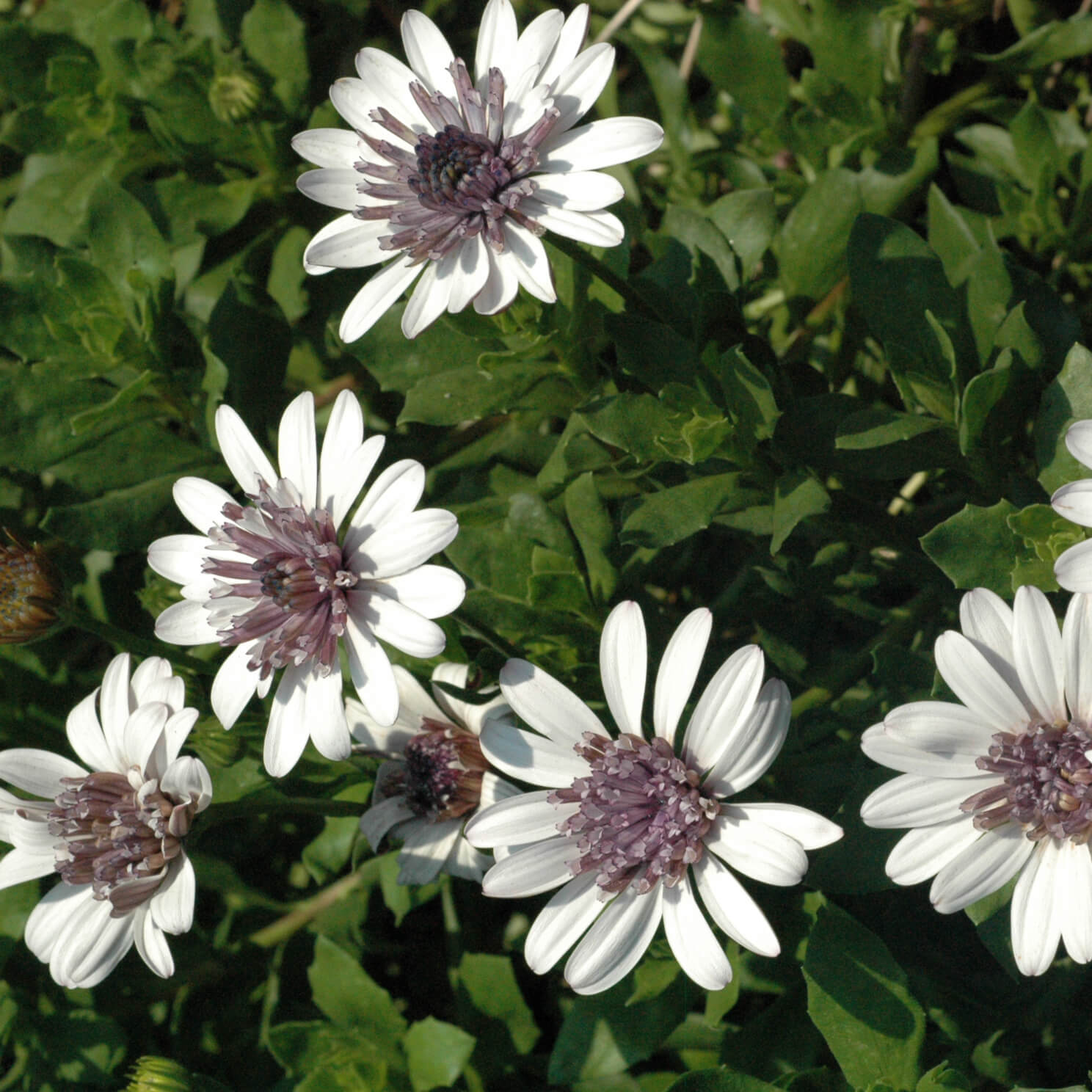 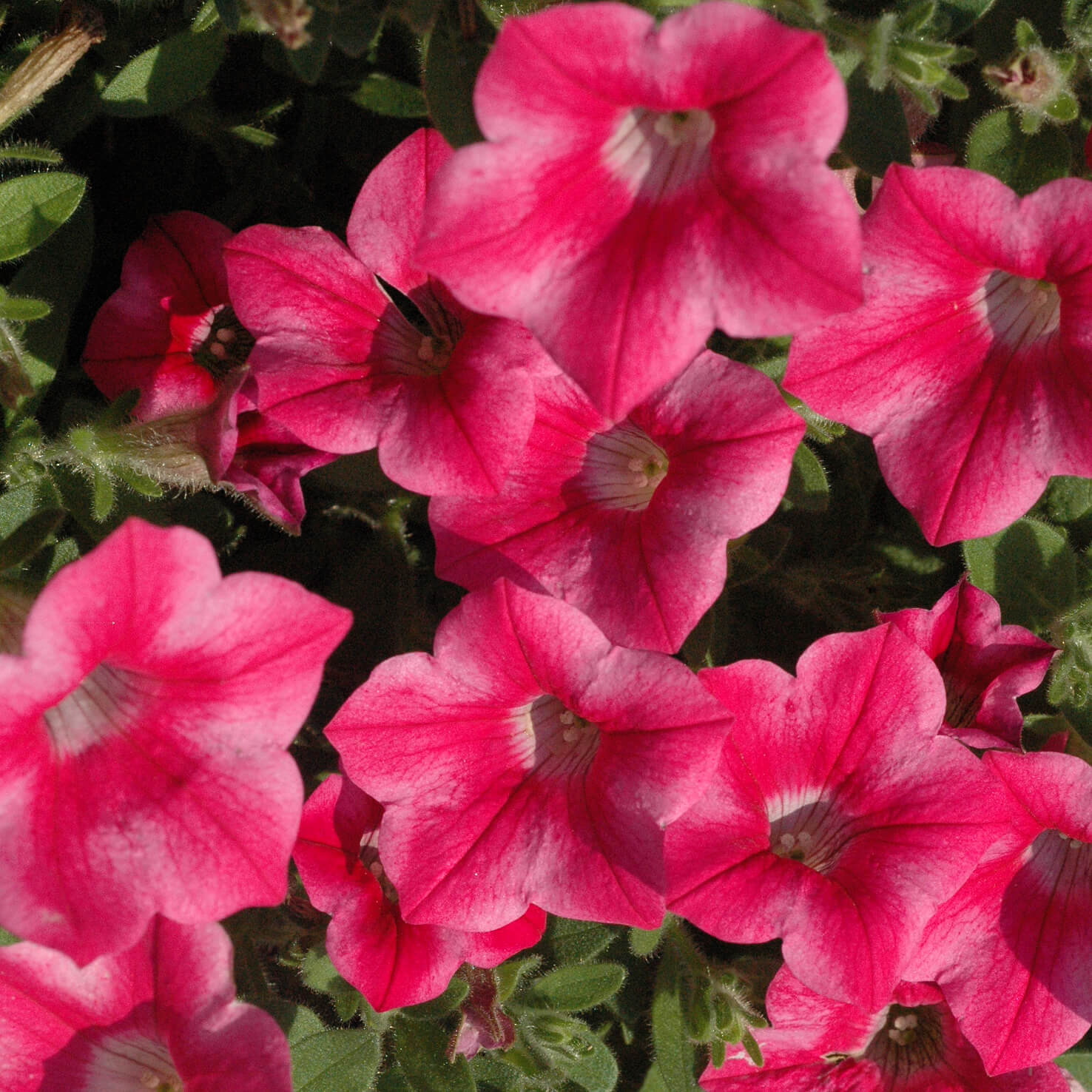 Whispers Star Rose petunia
Petunias
Few annuals can top the petunia’s growth and bloom performance under warm, sunny conditions. As long as it receives adequate fertilizer and irrigation, the petunia will bloom well into the fall.

Breeders continue to release new flower sizes, plant habits and colours to add to this versatility. In 2011 the first black petunia, Black Velvet, was released to the marketplace. This past summer we trialed its improvement, Black Satin. Some of the improvements include a more stable flower colour and better flower form. Quite by accident at one of the trial sites, I planted the Black Satin next to White Russian, a new petunia from Proven Winners. The solid black (really dark purple) of Black Satin and the white with black throat of the White Russian contrasted well in combination.

A third petunia worth mentioning is Whispers Star Rose. This is a new vigorous, trailing small-flowered petunia has great rain tolerance and striking dark pink stripes on a light pink background. This plant had great performance in both containers and beds.

Combinations
Over the past five years, breeders and plant suppliers have been making your mixed container design work easier by creating the mixes at the propagation stage of production. You, as the end-user, don’t need to worry about which plants grow well together, as that has already been determined by the breeder.

Plant breeder Dummen sells its combos under the Confetti Liner banner, while Syngenta calls its mixes Kwik Combos. There is a wide assortment of combos for different colour and cultural needs. You may easily see these by searching the Internet for the above combo names. The year 2011 was the first time we have trialed these combos, and we did so in both containers and ground beds. Most of the combos did well in containers, but only a few of the vigorous types did well in the beds. Kwik Combo Fire and Ice caught my eye this season, because of the way it responded to different growing temperatures. During the heat of the summer, the yellow bidens and red petunias predominated, while in the cool of the fall the yellow bidens and blue lobelia were more prominent.

The evaluation of perennials in the trials is a multi-year process.  Winter hardiness and disease resistance are a few of the characteristics of interest. In 2010, we planted a white Eupatorium (Joe Pye weed) called Ivory Towers. In 2011, it bloomed in mid- to late-summer and reached heights of as much as six feet in well-watered plots.

In 2009, we planted a new perennial aster (Symphyotrichum novae-angliae) from Blooms of Bressingham, called Vibrant Dome. This plant is compact and mounding unlike the wild type of New England aster, reaching a maximum height of 20 inches. After two growing seasons it appears to be powdery mildew resistant. When it blooms in late summer, it is covered with eye-catching purple flowers.

With over 500 different plants in the 2011 trials, it is not possible to describe all the new colours and forms that are available to you for this coming season. Visit the Guelph Trial Garden website www.plant.uoguelph.ca/trialgarden for complete ratings on all trial plant materials. Contact Rodger Tschanz at rtschanz@uoguelph.ca.
Share
Tweet
Mail