The magic of mulch

Did you know mulch is one of the most effective ways to boost your soil health and plant longevity?

But what is mulch? Depending on the variety, mulch is a mixture of finely or roughly ground woods that can be spread on the top of your garden. Many gardeners love the aesthetics of mulch, with bold colours like red and black adding dramatic contrast, while earthy brown tones provide a more natural look.

“There are a lot of manufacturers that will bring in spare wood and what they do is they grind that wood and colour it,” Durzi said. “That would be considered a recycled wood chip and it really has no benefit except adding aesthetics. Natural wood cedar or pine are mainly the bark. When you get into mixing hardwood and softwood, this tends to have many benefits.”

The first benefit is that natural mulch adds much needed organic matter to the soil. Organic matter promotes growing conditions by providing nutrients and habitat for helpful organisms.

“Most bark is very high in organic matter and low in pH, so as it breaks down it is just adding all of the organic matter to the soil,” Durzi explained.

Mulch is able to absorb a lot of water while also making the surrounding soil more porous. This helps the soil retain water for longer and breaks down clumpy areas.

Soil containing mulch retains up to 70 per cent more water, which can make a real difference when plants experience a dry spell.

Durzi said, “mulch helps to break down clay soil by adding porosity, and as it adds porosity and takes in water it’s creating a richer, softer, more airer soil.”

Adding mulch to a garden is a piece of cake. Durzi explained gardeners can plant as usual and then add two to three inches of the mulch on top. No mixing in is required! 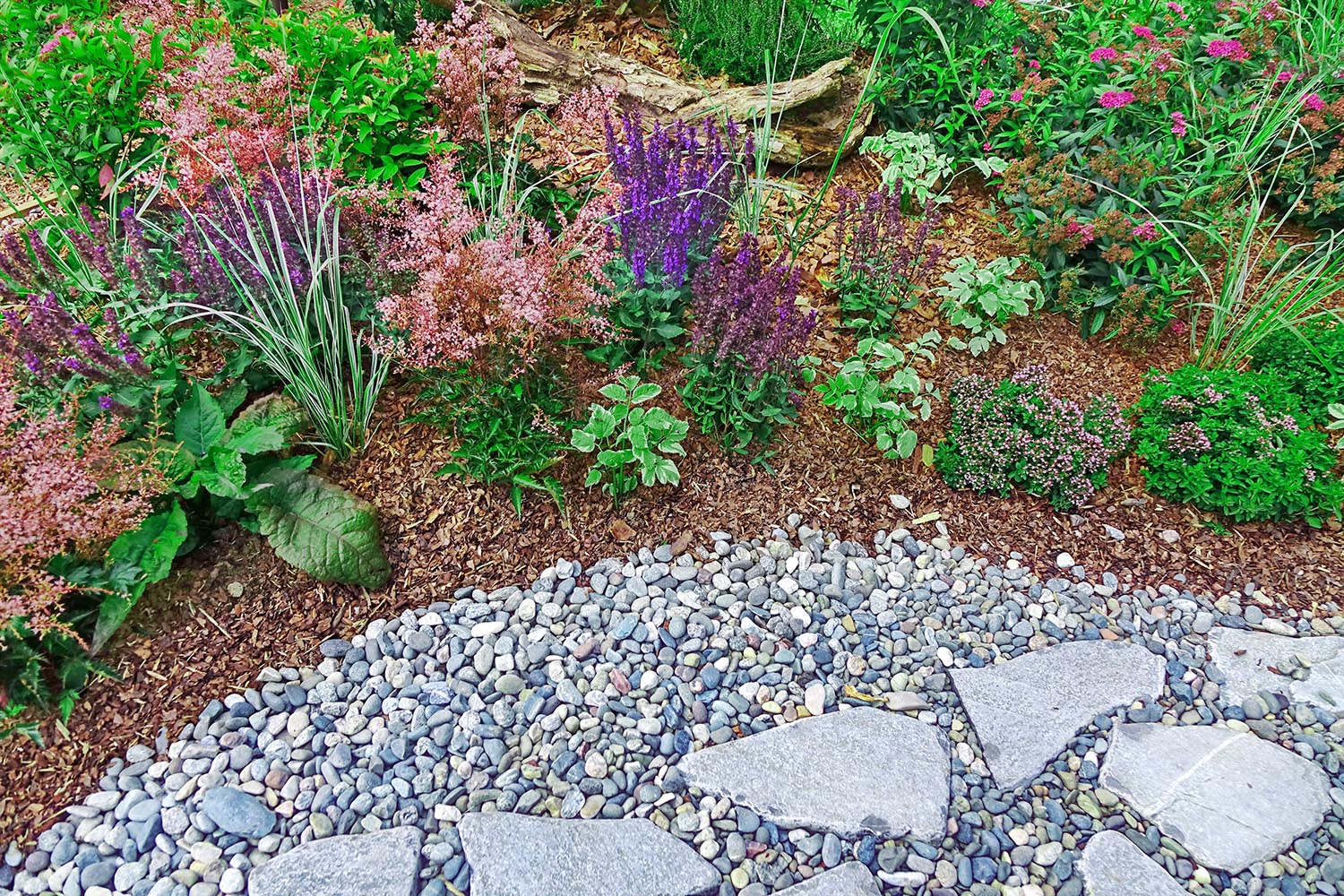 Placing mulch on top of soil also mitigates the impact of the hot summer sun on plants.

“You are basically regulating the sun beating down on the plants,” Durzi said. “Since mulch adds that extra barrier, you are able to keep the roots nice and cool.”

“They plant thousands of trees along the 401 corridor every year,” Durzi said. “They will plant that little tree and put a pile of mulch around it because they are adding all the benefits we want to support growth, but it’s also providing a strong structure so that if there are strong winds the mulch will help add stability.”

Mulch also provides erosion control and slope stabilization through a matting effect. This effect is typically achieved by placing a thin mat on top of plants to keep them stabilized. Mulch offers this stabilization and prevents washout during heavy rain with no need for an additional mat.

Durzi encourages buyers to look for natural shredded mulch as other products on the market like rubber mulches are advertised to be environmentally friendly, but add no value to soil health.

“Rubber mulches, yes they are recycled from car tires, but you are still putting them into the environment and they have no added benefit, so is it really a recycled product?” Durzi said.

Natural mulch is often derived from manufacturers who peel it off of lumber products, making it an eco-friendly way to utilize bark that would otherwise be headed to the landfill.