Snow and Ice Control of Parking Lots, Platforms and Sidewalks

Editor’s note: The SICOPS research project, Snow and Ice Control of Parking Lots, Platforms and Sidewalks, filled a knowledge gap for contractors charged with providing safety in these important environments. Landscape Trades published SICOPS research findings in the July-August 2013, August 2016 and August 2017 issues. The project concluded in 2018, with final results presented is this issue.

The project, Snow and Ice Control of Parking Lots, Platforms and Sidewalks (SICOPS), was motivated by the need to develop guidelines and standards for parking lot winter maintenance providers. Over 5,000 tests were conducted during the first phase of the project under semi-controlled conditions, which resulted in a model with bare pavement recovery time as a function of salt application rate, pavement temperature and snow density.

Since the model was developed under semi-controlled conditions, SICOPS phase II was launched to validate the model under normal field working conditions. Salt application data for parking lots from a variety of functional classes were obtained under a wide range of weather conditions. A total of 351 site events were covered and used for model validation; sites were located in Kitchener/Waterloo, Ont., Buffalo, N.Y., Milton, Mass., Dubuque, Ia. and Onondaga County, N.Y. Locations for testing were changed from year to year to ensure model performance when applied to other locations, to account for different maintenance practices specific to different winter maintenance contractors and to cover a wide variety of weather conditions. In the season 2015/16, data were collected manually, whereas for the other seasons, the process was automated using mobile apps and data loggers, the support functions for which were designed using data from this project.

The original model formulated a relationship between bare pavement status or amount of snow being melted and salt application rate, as well as environmental factors such as temperature, snow type and amount. Later on, a number of adjustment factors were developed to account for different surface types (e.g. asphalt concrete, Portland cement concrete and interlocked concrete), snow density, traffic volume, alternative salts and use of pre-wetting. These factors were proposed to account for the variation not covered by model variables. Based on the validation results, it was found in general that results from the model were very well in line with those observed from the study sites. On average, the observed and predicted bare pavement differed by less than two hours over an entire season for most of the events.

How much salt do you need?
This chart provides results from the Bare Pavement Recovery Time model for a number of conditions. For snow depth over 2.5 cm, it is recommended to plow first. Use it to determine application rates for varied snow depths, temperatures and bare pavement times. For example, with a pavement surface temperature of -5°C, a salt application rate of 35 lbs./1,000 sq. ft. is recommended to melt one cm of snow to reach bare pavement within four hours. 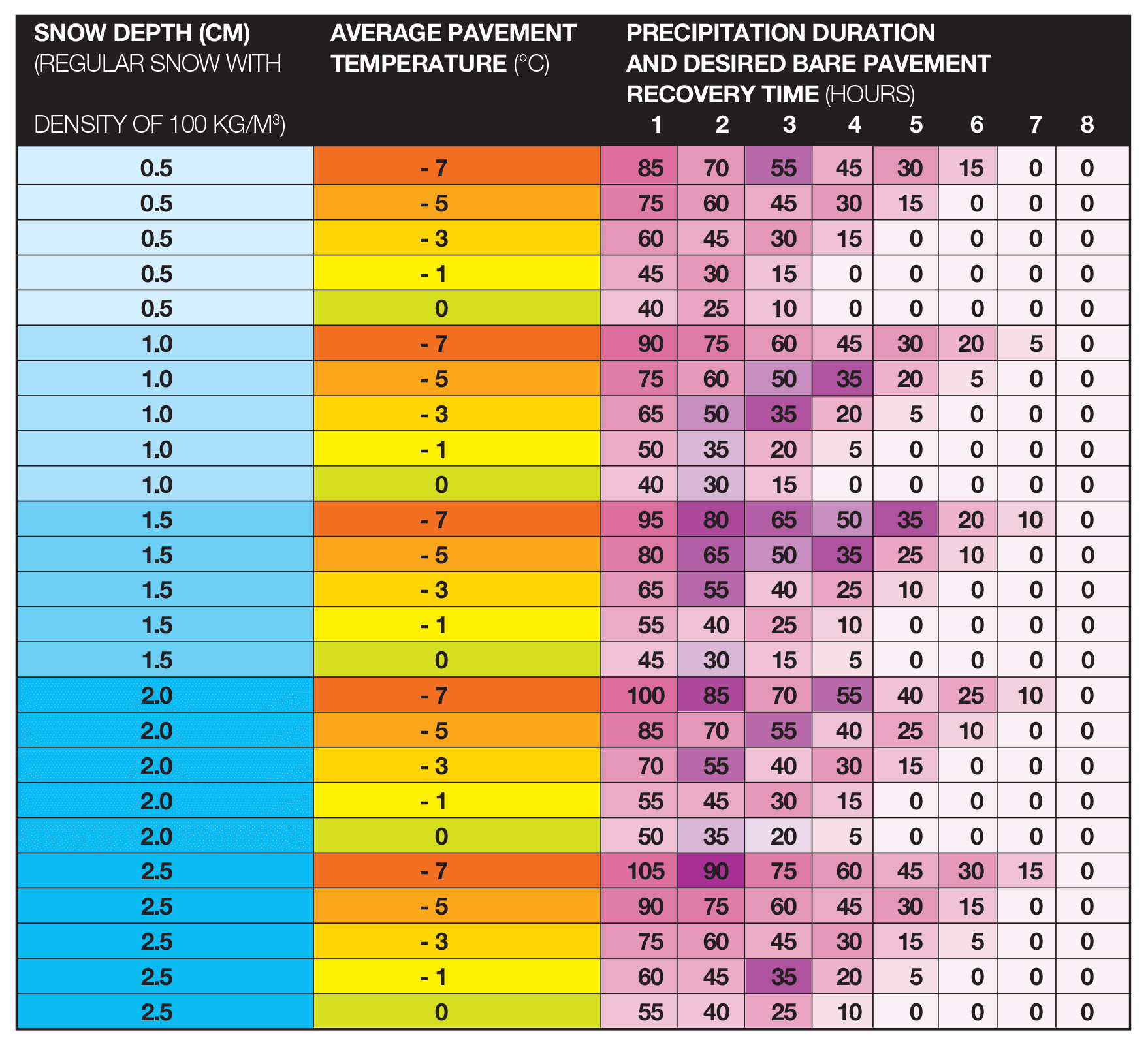 Use this chart to determine application rates at varied snow depths and temperatures to know expected Bare Pavement Recovery Time. The developed model, however, has some limitations as well which are listed below: Dr. Taimur Usman is a post-doctoral fellow at the Innovative Transportation System Solutions Lab, Department of Civil and Environmental Engineering, University of Waterloo in Waterloo, Ont.

A large number of researchers contributed to the success of this project, including two post-doctoral fellows, four full-time graduate researchers, and over 30 co-op students. This project has been made possible with the financial and logistic support of many organizations from both government and private sectors, including Landscape Ontario, GO Transit, Toronto Region Conservation Authority (TRCA), Natural Sciences and Engineering Research Council of Canada (NSERC), Ontario Ministry of Transportation (MTO), Snow and Ice Management Association (SIMA), Viaesys Inc., and a number of private contractors from across Ontario.