Water management is one of the most important issues in nursery plant production. Providing enough water to the plants is essential to maintain an optimal growth and has a direct impact on both plant appearance and the duration of the production cycle. Nonetheless, deciding when to irrigate is often challenging and overwatering can be detrimental both for the environment and for production costs.

Nursery plant production requires a large volume of water (up to 200,000 liters/ha/day) and optimization can therefore have a significant effect on the volume needed every year. To optimize water use and help in the decision making, we evaluate a new generation wireless tensiometer that measures the water available to the plant and allows precise irrigation control.

Using a web interface, we were able to monitor changes in water availability to the plants in real time. This allowed precise control and an accurate assessment of the best irrigation threshold for different species. Based on these results, we are comparing four irrigation strategies in a commercial nursery; using notably wireless tensiometers with or without capillary mats. Water use and plant growth are measured to determine the impact of each of the strategies, providing useful information for the evaluation of the wireless tensiometers. In parallel, we try to find the best clustering practices for a wide range of species by combining them to reference species monitored with wireless tensiometers. One challenge in a nursery is the wide diversity of species that are grown together. Each has different water needs and it would be too expensive and/or complicated to monitor them individually with tensiometers. By knowing what species cluster best together, we hope to set guidelines towards more efficient water use in plant nurseries. 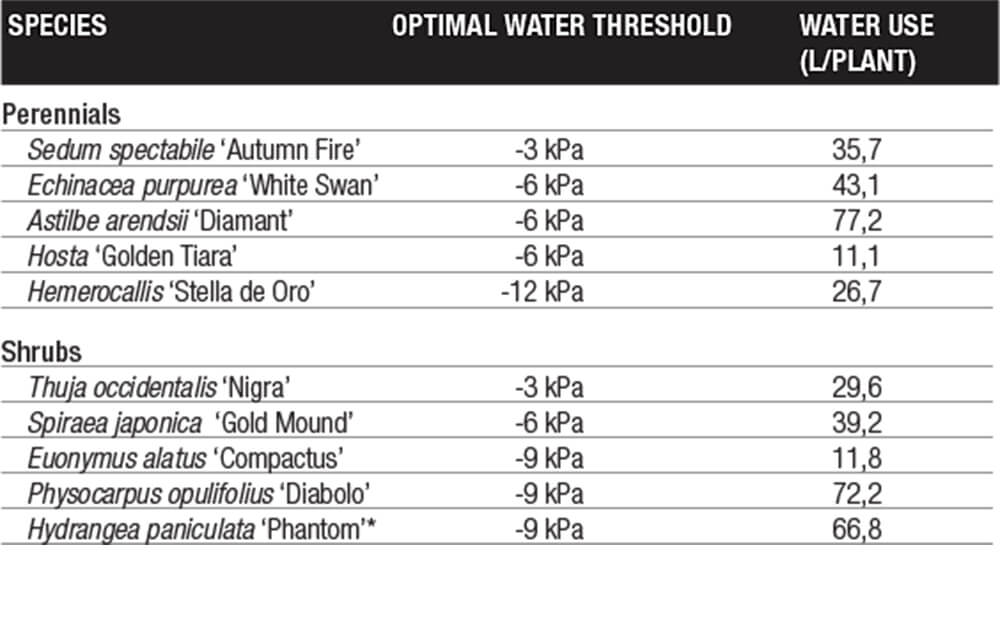 Optimal threshold for the 10 reference species used for the project and total water use for each species at their optimal threshold in 2015. *The cultivar Phantom was not available in 2016 and was replaced by Mega Mindy.
Irrigation is one of the most important factors for nursery profitability, influencing both quality and production costs. Nursery production requires a significant supply of water, especially for container production. Despite the importance of irrigation, nursery water management appears to mostly depend on the personal judgment of growers rather than measurements. Almost three producers out of four base decisions to irrigate on visual appearance or pot weight. Not enough water can retard plant growth and reduce quality, while overwatering can be highly detrimental to the environment and can cause, at least for some species, severe growth disorders. It also raises production costs by increasing the expenses related to water treatment, irrigation system maintenance, pumping and/or acquisition cost, and irrigation labour.

By delivering the right amount of water at the right time to the right plant, precision irrigation offers a way to optimize water management. In this project, we evaluate how wireless tensiometers can be used to implement precision irrigation in nursery production. Wireless tensiometers measure the water available to the plant and send the information by cell signals, allowing a real-time monitoring and a precise irrigation. More specifically, the objectives of the project include: The deliverables associated to the project are: 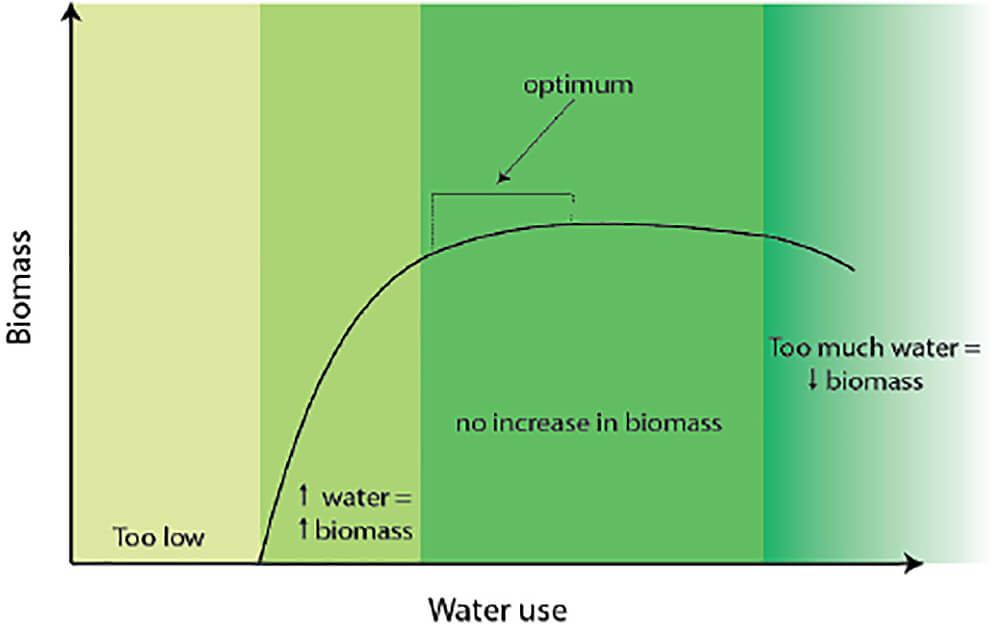 Relation between water use and biomass in a nursery setting.
During the first year of the project, we have evaluated the optimal irrigation threshold for ten reference species, selected for their popularity and wide range of water needs. Four irrigation thresholds were selected, ranging from abundant water available to the plant (-3 kPa) to very little water available (-12 kPa). The plants were grown in two gallon pots at the nursery of Université Laval from June to September under a high tunnel to control the irrigation. Water meters were used to measure the volume of water associated with each treatment. Plant growth parameters were monitored throughout the growing season and biomass yield (dry weight) was measured at the end of the season. The experiment for each reference species was conducted as follows: four treatments (soil tension threshold), 12 biological replicates, for a total of 480 plants.

After an analysis of the results, each species was assigned an irrigation threshold based on the driest treatment which allowed an optimal growth. There were major differences in the total volume of water used by the species regardless of their optimal threshold. For example, the Hosta used around seven times less water than the Astilbe despite growing the best at the same irrigation threshold. This difference, which can be explained in part by their contrasted growth rate, illustrated the need of creating clusters based on their overall water needs during a season. 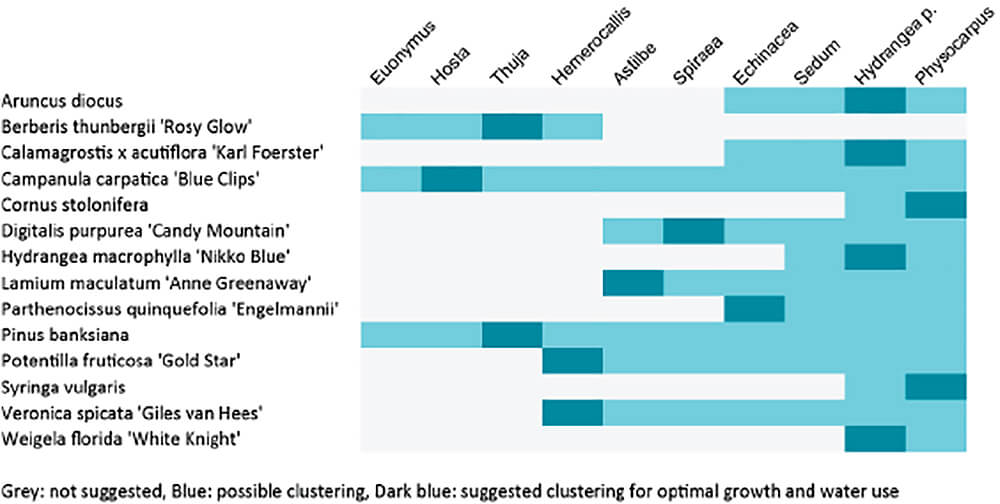 Best clustering based on growth and water use.
It is important to point out that the amount of water used during a season can change from year to year. For example, the summer of 2016 was warmer and sunnier than 2015 (the effect is accentuated by the tunnel) and plants grew more (and used more water). It can also change drastically depending of the size and quality of the plug used. For example, the Astilbe we had last year were really vigorous from the start, while the quality of the plants from this year was not as good. The result was a decrease in the amount of water used (while it increased for all the other species). Therefore, before clustering species or cultivars together, it is important to assess the vigor of the plants.

Based on the results of 2015, we have evaluated in 2016 the efficiency of wireless tensiometers in a commercial setting. We have compared four irrigation strategies for one of the reference species; standard irrigation by the grower, irrigation by the grower with a capillary mat, automatic irrigation based on wireless tensiometers, and automatic irrigation based on wireless tensiometers in combination with a capillary mat. Water use and plant growth were measured to assess the impact of each of the strategies. Automatic irrigation with wireless tensiometers (either with sprinklers or with capillary mat) resulted in plants with the same size and quality as the one irrigated by the experienced grower. It didn’t however allow reducing the amount of water used. The main reason is that while the grower was avoiding watering just before rain was forecasted or when the wind was really high and could blow the drops of the sprinklers, the automatization didn’t allow such finesse in the decision process. More complete automatization systems with weather stations do exist (from Hortau and other companies), but were not tested this summer. Those would likely decrease the water used in a completely automated system. 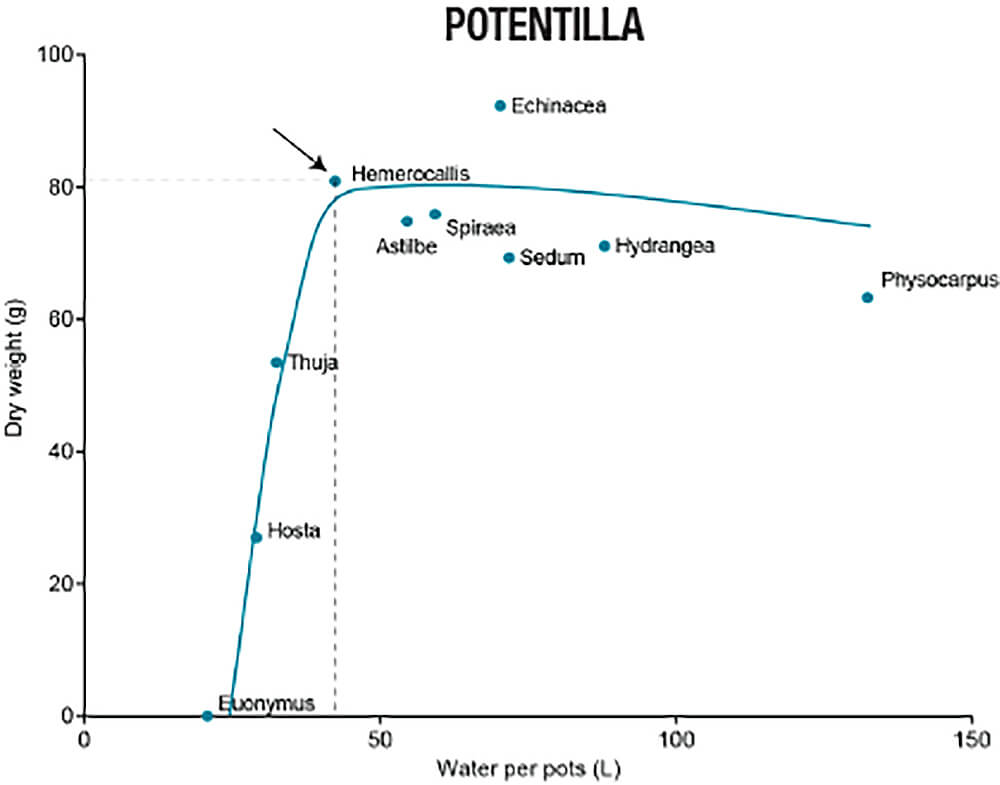 Clustering results for Potentilla.
br /> Regardless, the wireless tensiometers provided reliable data all summer, likely facilitating the decision process of growers who will use it. The main advantage of wireless tensiometers is the possibility to access the information from wherever you are (either by using the web interface or by receiving alarms on your cell phone). This allowed more flexibility in the nursery operations and also prevent an oversight.

The second goal of this project is to find the best clustering practices for a wide range of species by combining them to ten reference species monitored with wireless tensiometers. Each year we are testing 29 new species in combination with the 10 reference species at their optimal threshold. The experiments for this section of the project are made at the Laval University nursery.

As expected from the result of 2015, the reference species needed contrasting water supplies. This means that, for example, the Weigela associated with the Euonymus received only 15 per cent of the water than the Weigela associated with the Physocarpus. This wide range allowed to establish for each species what association allows an optimal growth. It was interesting to see that most species are able to grow well with several of the reference species. For example, the Potentilla gave similar results when clustered with 7 out of the 10 reference species. This also means that they can sometimes give similar results with far less water. In the setting of our experiment, the clustering Potentilla with Hemerocallis resulted in the same growth as clustering with Physocarpus while reducing the water use by 70 per cent. For other species like Cornus, only the clustering with the most water demanding species gave good results. A partial list of the species used in 2016 with the best clustering for each can be found below.

Relation between the water use and the gain in biomass can be illustrated above. If the water is not sufficient enough, the plant simply dies. This situation happened for a few species (example: Potentilla) when associated with Euonymus which doesn’t need a lot of water to thrive. Past that threshold; plants gain biomass as water increases until they reach a plateau where more water won’t translate into biomass gain. If too much water is applied, the biomass will start to decrease. To reduce water use while maintaining optimal growth, it is important to target the beginning of the plateau. Results from the clustering experiment illustrate well how it can be done by associating plants together. We can see that we didn’t reach the plateau yet with Cornus (we would need a reference species that needs more water), while we did with Hydrangea macrophylla and Potentilla. 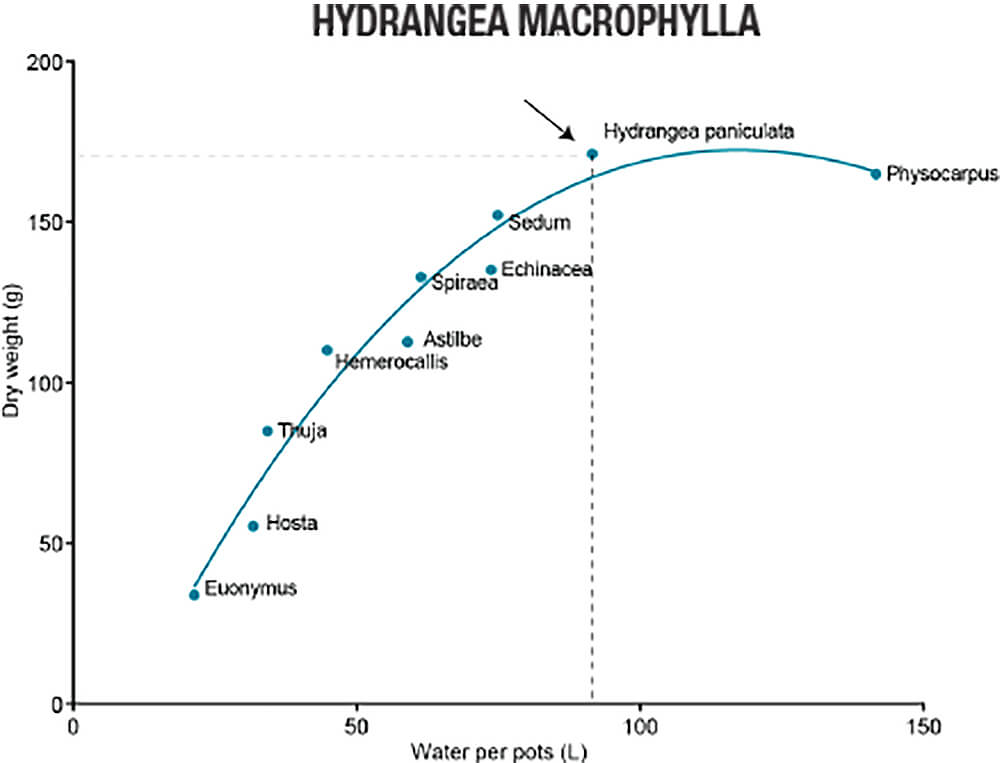 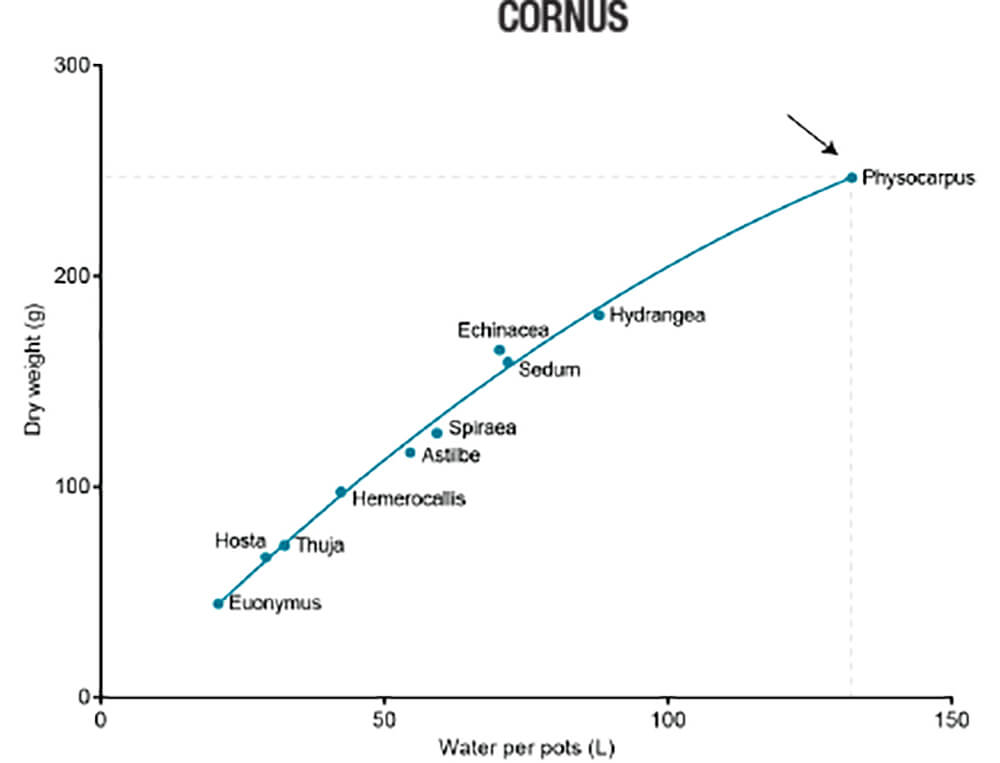 It is important to point out that the first month after transplanting can be really critical and since species often establish at different speeds, it is important to monitor each species individually at the beginning. It was particularly evident for species like Physocarpus, which despite needing a lot of water later in the season is slow to establish in the beginning. For that reason, the watering based on the clustering was implemented only after the establishment.

Precision irrigation has the potential to reduce water use significantly in nursery plant production. Our project shows that wireless tensiometers provide reliable data that can be used to decide precisely when to irrigate. Moreover, it allows more operational flexibility by giving easy access to the data wherever the grower is. Our research also highlights the great diversity of water requirements between species and how it is possible to reduce water use by making efficient clustering of species.