Share
Tweet
Mail
Before the Ontario Horticultural Trades Foundation was created, members of the newly formed Landscape Ontario saw a need to encourage young people to enter the industry.

In 1975, $2,541 was accumulated into a Scholarship Trust Fund. A total of $1,200 was given to the University of Guelph to research the ‘Growth Study of Woody Plants.’ Two scholarships were awarded by Landscape Ontario in 1975: one to Kent Turvey of Brantford and one to John Reddin of Windsor. In recognition for achieving the highest academic standing, Kent received $175 and John received $200.

In 1976, LO handed out scholarships to Alberta Auger, Samuel Augustine and Arthur Strange. It was noted that $175 was awarded to Hugh Simpson, an apprenticeship graduate.

The committee noted that it was looking into a method in which monies donated would be placed in a trust fund for use on research projects. The letter suggested a number of methods could be used to raise the money for the trust. Some of these included members contributing on an annual basis, or money donated through wills. The Landscape Ontario Horticultural Trades Foundation became an official entity in 1979.

The first Landscape Ontario Auction Sale to raise money for the Foundation was held in 1981 at Timm Enterprises in Oakville. It raised just over $2,000. The following year a total of $3,581 was raised.

The very first scholarship handed out by the Foundation was on Mar. 27, 1981, to Dennis Wale, a student with the highest standing at Humber College. Dennis was employed at Brantford Parks and Recreation.

Bob Chessman, executive director of Landscape Ontario, handed out three awards when the University of Guelph held its spring convocation. A total of 46 students received diplomas at the 1984 event. The three LO award winners were: Antonio Da Silva of Oshawa, Peter Viles of Burlington and James Roberts of Ottawa. 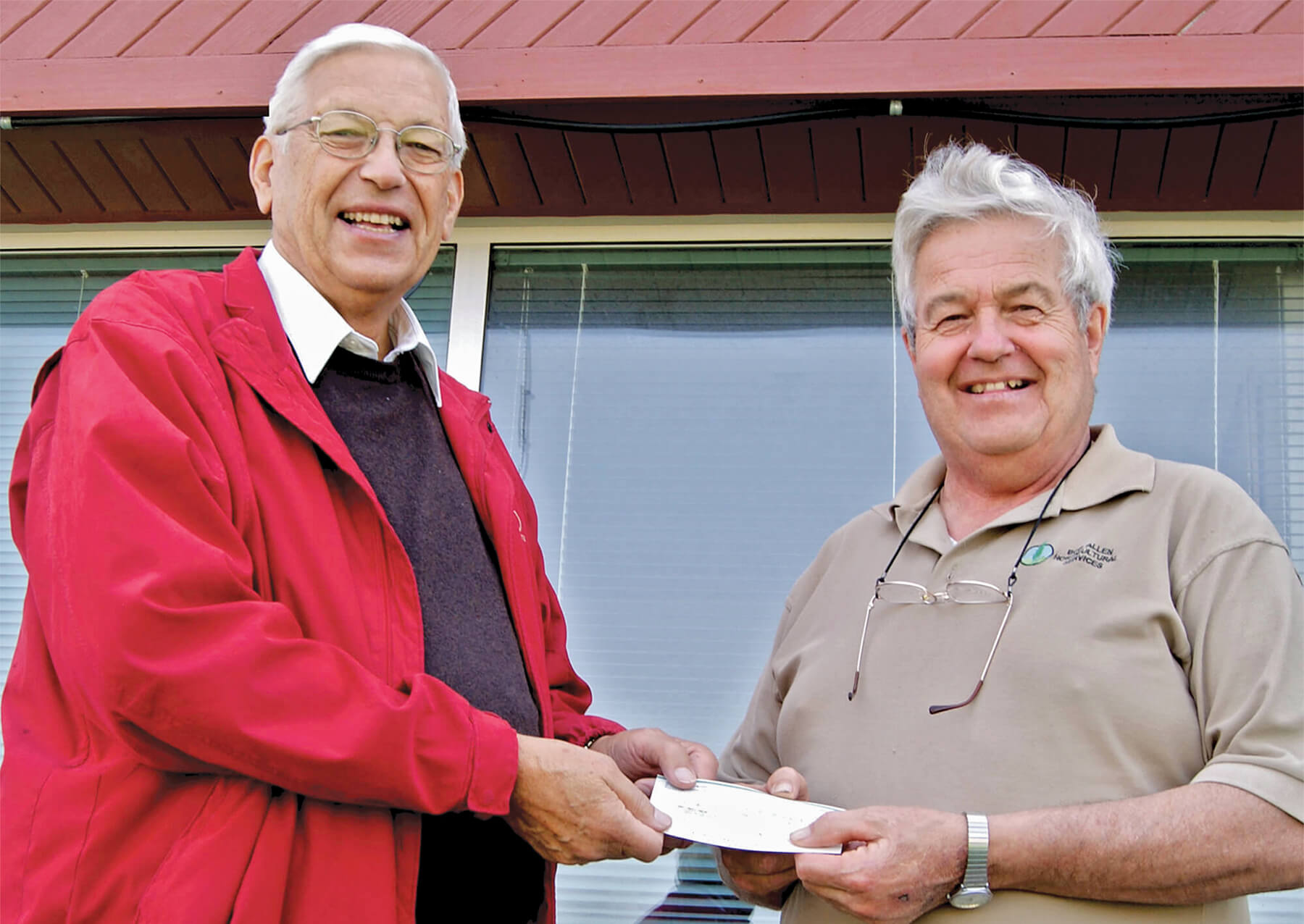 John Wright and Bob Allen. In the fall of 1984, the Foundation handed out four awards at two separate ceremonies. The first event was the Ontario Agricultural Awards ceremony where two students received the Howard B. Dunington-Grubb scholarships. Bob Cheeseman presented Karen Beswick and Scott Turner with scholarships. The LO executive director then attended the University of Guelph’s fall semester awards program on Oct. 30 to hand out Foundation scholarships to Virginia Burt and Alice Verkade.

Rain didn’t dampen the success of the Growers’ Group Auction at Timm Enterprises in 1986 when over $15,000 was raised for the Foundation.

Both the format and location of the annual LO auction changed in 1990. The auction moved from Timm Enterprises to Connon Nurseries NVK. The event also included a mini trade show. Over $25,000 was presented to the Foundation.

Foundation sets the goal of $1 million

In an interview with Foundation chair Barry Benjamin, he revealed the objective was to reach $1 million. “It’s a fact of life that big money attracts more big money,” said Benjamin said. He noted that at present the Foundation provided a maximum of 25 per cent toward the cost of any research project.

Benjamin went on to explain that the government was committed to cut back on research dollars. “It will be up to private industry, working through venues such as the Foundation, to support much needed education and research and development for the green industry.”

The Foundation approved approved a total of $15,500 in research grants in 1992. Most of the projects were from the University of Guelph, while others included Ridgetown and Kemptville Colleges.

In the spring of 1994, a think tank, with over 50 LO members in attendance, was held to look at future priorities for the Foundation. Following the meeting, the Foundation’s board created a list of seven research priorities. The list read: sales and marketing, environmental concerns, pests and diseases, plant selection and breeding, cultural practices, education, and communication and standards. On the scholarship side, a total of $18,000 was available for eligible students.

In late-1995, the Foundation gave out a total of $4,000 in scholarships to six students. One of those students, David Wright, received $1,000 and many years later went on to serve as President of Landscape Ontario.

The first recipient of the newly created Casey van Maris Award was Tracey Adams, a first-year student at the University of Guelph. The award went to first year post-secondary students studying horticulture. Tracey received her award from Foundation president John Wright on Nov. 7, 2001.

To kick-start the drive toward a $1 million trust, a special promotion saw volunteers from the Ontario Horticultural Trades Foundation and home office staff spend many hours attending trade shows and events to sell raffle tickets for the chance to win a special edition Harley-Davidson motorcycle. The draw was made on July 16, 2004, at the annual Toronto Chapter golf tournament. Jay Murray of Tender Care Lawn Care won the bike after spending $100 for six tickets on the draw. “I didn’t mind making a $100 donation to education, and if I got lucky, so much the better,” Murray said.

Foundation president John Wright, who drew the winning ticket, said the bike raffle was very successful in raising the Foundation’s profile. “Up until now, the Foundation has been our industry’s best-kept secret,” He noted that in 2003, the Foundation had awarded 23 scholarships and would review twice that many that fall.

On Sept. 4, 2004, during a surprise 50th birthday party held for LO executive director Tony DiGiovanni held at the Toronto Botanical Garden, LO President Tom Intven, together with Gerald Boot and Paul Offierski announced that members and the industry had raised $75,000 to start the Tony DiGiovanni Horticultural Scholarship Fund. The $1,000 award is given to a candidate that best exemplifies the qualities that build trust in the profession of horticulture.
In 2005, the Foundation announced a total of $22,500 in scholarships went to 26 students. The same year, the Foundation also provided funds to support the Skills Canada competition, in which the team from Fanshawe College won a gold medal in the national competition in Edmonton, Alta.

New brochures in 2006 highlighted donor options and scholarship opportunities. Entitled Make a Difference, the brochure informed potential donors of the new methods to make a donation. Along with an enclosed pledge card, the brochure outlined categories of Tribute, Matching Gift, Steward and Life Insurance.
The Foundation proposed a range of scholarships in late 2006 for new high school graduates. There were five scholarships at $1,000 for students entering a horticultural program in college or university, $400 for students who take an apprenticeship two years after leaving high school, and $500 scholarships for graduates participating in Landscape Ontario’s Professional Development Program.

With the pop of a champagne cork on July 19, 2007, John Wright, chair of the Foundation, announced the goal to hit the $1 million mark had been achieved. The celebration took place at the LO home office.

John thanked the members for their countless hours of work. While raising his glass in toast, he offered another challenge to raise another million dollars. The Foundation raised its annual donation for scholarships from $20,000 a year to $30,000 a year to benefit 30 high school and post-secondary students with their education. 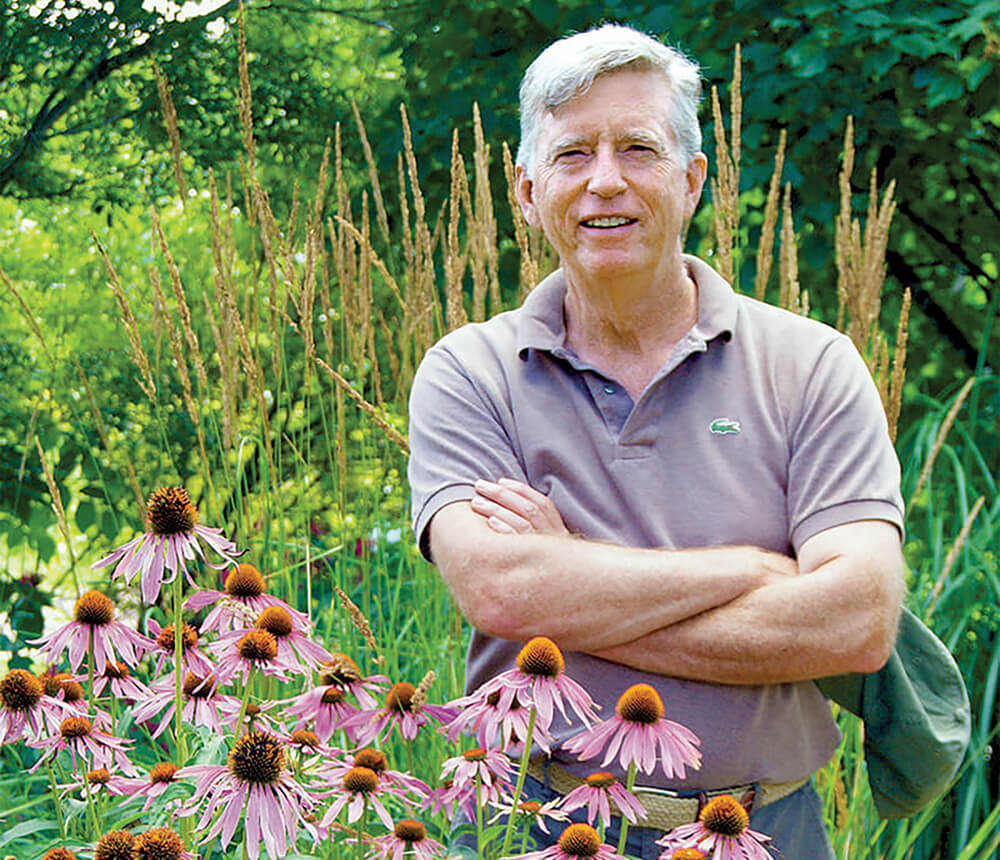 John Wright announced in January of 2010 that the organization had agreed to contribute the first $100,000 for an endowed research chair at Vineland Research and Innovation Centre.

“We have formed an alliance entitled Landscape and Environmental Horticulture Alliance (LEHA). It is aimed at raising awareness for the societal benefits of the green industry,” Tony DiGiovanni said. Members of LEHA included: Bill Ingratta of Vineland, John Wright, Mark Ostrowski (Foundation board member), Kathy Elton of the University of Guelph, Rene Van Acker, associate dean at the University of Guelph, Ric Jordan of the Guelph Arboretum and DiGiovanni. The group formed a special fundraising committee. That committee included Paul Olsen, Hank Gelderman, Bill Mori and Bill Stensson.

The Foundation also contributed thousands of dollars over the years to research programs. In 2009, $51,519.51 was provided to help fund research to assist the future of the industry.

The next phase of the Foundation’s evolution came when Canada’s best known gardening personality, Mark Cullen, threw out a challenge to members of Landscape Ontario. Cullen and his wife Mary pledged $30,000 a year for the next three years to support post-secondary scholarships through the Ontario Horticultural Trades Foundation.

“I have pledged the money because I feel we need to nurture the young people who want to make this industry their life work,” Cullen said. “If our businesses are to continue to thrive, we need to attract good, reliable people.” Under the Foundation umbrella, the Cullen Family Scholarships now distribute more than $20,000 each year to deserving students.

Tony DiGiovanni responded, “One of the most inspiring parts of my job is getting to work with contribution-oriented industry members who freely and enthusiastically dedicate their time and resources in order to benefit others they don’t even know. They are like the tree planters whose actions today benefit generations tomorrow. Mark Cullen fits the profile.”

On Aug. 24, 2015, Foundation president and visionary John Wright passed away. “One of John’s proudest legacies was his work with Landscape Ontario,” his obituary read. “A founding member, he went on to chair the Ontario Horticultural Trades Foundation. He believed in giving back to the horticultural industry in every way.”

In late 2020, long-time Foundation member and industry pioneer Neil Vanderkruk passed away. The Foundation established the Neil Vanderkruk Innovation and Scholarship Fund. Plans called for $100,000 to create a permanent scholarship in Neil’s name. “Neil was a special guy, he was running one of the biggest nurseries in Canada, and he took his volunteer job at the association so seriously,” DiGiovanni said. “He just put all of his time in. It was amazing to watch his commitment to it.”

Now, the Foundation provides over $60,000 annually to scholarships to students enrolled in secondary and post-secondary landscape and horticulture programs in Ontario. Research funds are also handed out each year to worthy projects through the Dunington-Grubb/Sheridan Nurseries Research Fund and the IPM Symposium Fund.

The journey over the past 50 years has been steeped in success due to the farsighted and hard-working volunteers whose passion ensured their industry would thrive for many years to come.
Share
Tweet
Mail