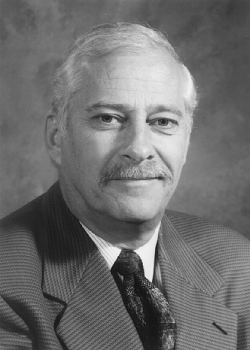 Marc Thiebaud, O.A.L.A., has worked in the landscaping industry most of his life, starting back in 1957.

Along with helping to grow his family’s company, Oshawa Garden Service (OGS), Marc also dedicated countless hours, energy, time and money to ensure his industry prospered in Ontario and right across Canada.

One of the original board members, serving as treasurer of the inaugural board of the newly formed Landscape Ontario in 1973, as well as Toronto Chapter president, Marc became president in 1975. That year saw the association form commodity groups to help ensure all sectors felt served by the newly amalgamated organization.

When Landscape Ontario was formed, it joined the then Canadian Nursery Trades Association (CNTA) as the first multi-commodity group association. Following his presidency of Landscape Ontario, Marc became an Ontario representative on the national association in 1976. He moved through the board as secretary/treasurer in 1978, first vice-president in 1979 and finally as president from 1980 to 1983.

Marc was one of the founding members of the revised national association when it was downsized and moved its operation from Ottawa to the Landscape Ontario offices, where it shared premises and an executive director until 1988. He was involved in the name change from Landscape/Paysage Canada to Landscape Canada in 1983, and also chaired the constitution and by-Laws committee in the early 1980s to expand the wording to include all of the commodity groups, rather than just the growers as it had been originally written.

He continued as chair of a number of groups through his years with CNLA, including Garden Centres Canada, Landscape Contractors Canada, Canadian Garden Council (formerly Canadian Nursery Marketing Council), chair of two Ontario CNLA summer tours and both the International Garden Centres Association seat for Canada (IGCA), as well as the Canadian IGCA Tour Committee chair from 1992 to 1995. Marc received the first CNLA Honorary Life Membership in 1995 in recognition of his continued dedication to the association and the industry.

“Marc was a strong board member with very strong convictions, Says fellow LO past president and honorary Landscape Ontario member Karl Stensson. “He was never afraid to speak his mind, and he always wore his national hat instead of his provincial hat.”

Marc says he considers himself a better administrator over his skill as a landscaper. Those skills have seen the company win two of the prestigious Dunington-Grubb Awards at Landscape Ontario’s annual Awards to Excellence. The honour goes to the most outstanding and highest overall scoring project in the construction categories.

That skill was demonstrated again in August, 2016, when OGS Grounds Maintenance Specialists was presented the National Award of Landscape Excellence in Commercial Maintenance in Kelowna, B.C.

A feature article on the company appeared in the June 2013 issue of Landscape Ontario magazine. That year OGS celebrated its 60th anniversary (see an article from June 2013).

In honour of the many years of service that Marc gave towards Landscape Ontario, he was named Honorary Life Member. This is the highest honour bestowed by Landscape Ontario. It is reserved only for those members who consistently contributed their time, passion, enthusiasm and energy over a period of many years. Those who are given this tribute have committed a lifetime to furthering the mission of Landscape Ontario. In the history of the association, only nine individuals have achieved this status. This award is determined by the Landscape Ontario Provincial Board of Directors.

His outside interests saw Marc serve as president in 1980 of the largest Kinsmen Club in Canada and is a Master Mason of the Masonic Lodge.

Marc Thiebaud continues to serve the industry he cares so much about. In 2016 he was still a member of the Landscape Ontario Building Committee.

For nearly 50 years, Marc Thiebaud lived his life that mirrors the words of Winston Churchill, “You make a living by what you get, but you make a life by what you give.” The landscape industry is better for it.