Researchers at NVK Nurseries examine the impact of composting

As a research scientist with NVK Nurseries, my focus is on plant health. And to reach the goal of a healthy plant, it always begins with healthy soil.

In nursery production, soil is constantly leaving the field. Just think about it. Every tree harvested takes its root ball of soil off the farm to its new home. After a few cycles, the field is depleted, and left with a very thin topsoil.

This is not a recipe for healthy plants, so what happens then? Fortunately, composting can help!

Composting is probably the first step in sustainability, soil and plant health. Yes, we can think about grandma doing compost at home or on the farm, and city folks making compost in their turning barrels in their backyards. It seems easy enough.

In my youth, I made compost with mixed results. The pile would grow year after year until we would look at it and say: “Wow! We’ve got good soil in there.” It took a few years, and I didn’t attend the pile much.  But this is not the type of compost I want to talk about.

There are various types of composting methods, but the key is the way you work the compost. Fortunately, there is a lot of great scientific research we can utilize.

American microbiologist Elaine Ingham and David Johnson, adjunct professor for the College of Agriculture at California State University in Chico, Calif., and others are conducting deep scientific research on compost at various universities. They do not just produce compost — they produce a product that holds life in it: micro-organisms. They have done the profession a huge service by presenting their findings at a number of conferences and events.

Composting occurs when billions of microbes decompose the materials we layer in a pile. These microbes use food sources (carbon and nitrogen) to do their job. And in order for that process to occur, we need to have the right ratio of carbon and nitrogen: about 20—30 carbon for one nitrogen.

Aerobic composting also requires good humidity and air flow within the pile. While there are several types of composting systems, including anaerobic (without oxygen), I will concentrate on the easy system of piling up the material and turning it to bring oxygen to it.

Using the Internet, we can easily find the carbon or nitrogen content of materials such as straw, manure, wood chips, etc. Remember that all these materials are not equal in their carbon or nitrogen content. Wood chips have an extremely high amount of carbon, so we use less in the pile.  We also need nitrogen for the decomposition to happen, with components like grass cuttings, perennial trimmings or even manure.

It is essential to have the right proportions because only then will we reach the correct temperatures for decomposition. What you really need is temperatures between 130—160 F (55—70 C) for at least 15 consecutive days, and to turn the compost about five times. Regular turning ensures oxygen reaches throughout the pile, and that all the material is subjected to high heat. Without high heat, pathogens and weed seeds survive and will eventually be spread throughout our fields. So reaching the proper heat level throughout the pile is critical.


Patience is a virtue

Composting well takes several weeks. That’s when it enters the heat phase (thermophilic), followed by a decrease in temperature (mesophilic) to reach a curing phase. This is really essential in order to obtain the correct proportion of microorganisms in the compost. If the compost is used too early, (still in the mesophilic or thermophilic phase), it may very well be toxic. Also, it will contain mostly bacteria, which is not what we are looking for.

During decomposition, the bacteria use the nitrogen to decompose. If we put this “green” compost at the foot of plants, we can easily understand that plants will not grow well. The microbes will be scavenging all the nitrogen around (they are more efficient than the plants at picking up nitrogen) in order to decompose the carbon-material. So let’s cure our compost!

During the curing phase, the compost switches the balance from bacteria to fungi. We need more fungi compared to bacteria. The fungi are made up of hyphae, which look like rapidly growing long roots. They are also efficient at creating a network in the soil to fetch nutrients for the tree roots. It has also been shown that some fungal species help trees communicate together through their roots (check out Dr. Suzanne Simard’s work at the University of British Columbia). It is truly fascinating.

Composting is not so easy to do after all. At NVK Nurseries in Dundas, Ont., we set up a trial from June 2020 through June 2021. Yes, it may take that long to produce a healthy compost! Of course, we can use the compost earlier, but through analysis done during production, we discovered a few things:

First, compost is not really a fertilizer per se. Its nutrient content is rather marginal for plant growth.

Secondly, the organic matter in it at the end of the curing phase totally depends on the initial inputs and how well the degradation process happens.

Thirdly, the microorganisms present and changing during the composting phases are extremely important and need to be monitored closely.

We can also successfully compost growing media from dead plants, with good heat during the thermophilic phase.

It is important to also realize the chemical and physical laboratory analyses do not give a complete picture of the composts. At NVK Nurseries, we have tested our compost with the general laboratory analyses — the large Solvita analysis — and lately, I have been checking the curing material under a microscope for the micro-organism evaluation. All of these tests have shown us that while it is good to get the general lab analyses in order to get an idea of what is in the compost, we must also analyze the microorganisms present.

At the end of the curing phase, we need the right microbes: a higher balance of fungus to bacteria. These microorganisms are the ones in charge of feeding the plants through a deep interaction with the roots. Without them our soils are depleted. We then keep on adding synthetic fertilizer, destroying more microorganisms. We then add more synthetic fertilizers, and our plants become ill. We then look to pesticides and our yields decrease. This cycle has been going on for quite a few years on many farms and gardens around us. It is not sustainable.

At the 2021 Soil Regen Summit, it was said that “everything (nutrients) is present in the soil already.” Our job is to help plants access those nutrients. This is done through micro-organisms. But microorganisms also need organic matter to feed on, and plant roots to interact with. This is a complete system.

So now we understand what composting is. We will need to tweak things down the road. And please, buy a microscope! They are actually much cheaper than you think and your kids can probably help you use it. From that point on, we have a healthy compost we can use in our fields and in our container production. Control your moisture and temperature well and it can be weed free.

The next thing that good quality compost can be used for is making compost tea. It is not voodoo science, but rather quite technical actually. Use the right amount in non-chlorinated water, add oxygen and foods for growing specific microbes, and voilà! 24 to 48 hours later the tea is ready to be used. 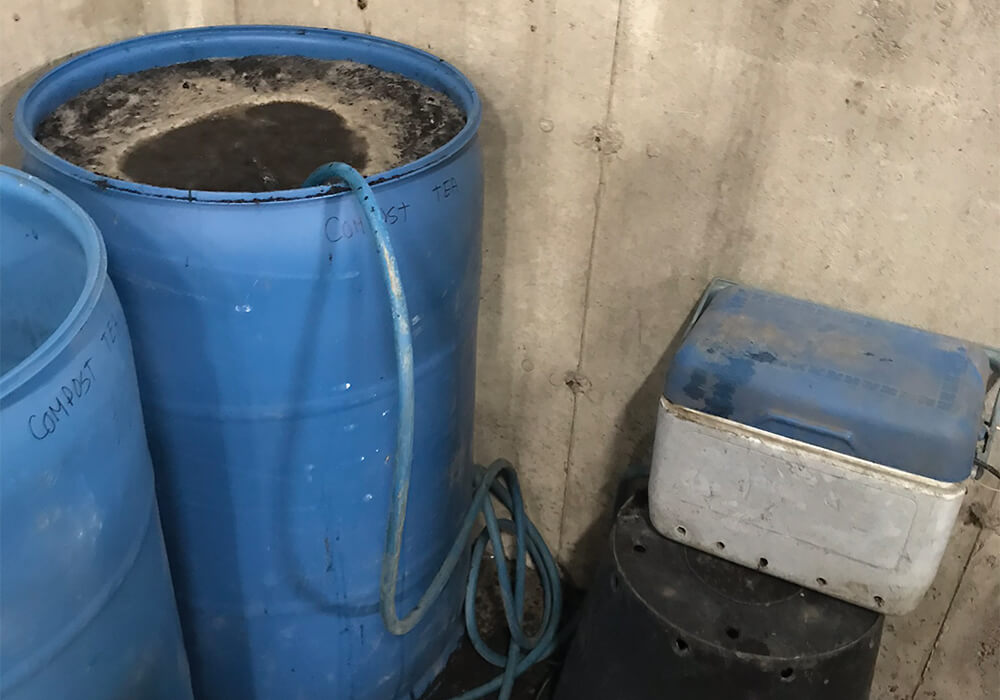 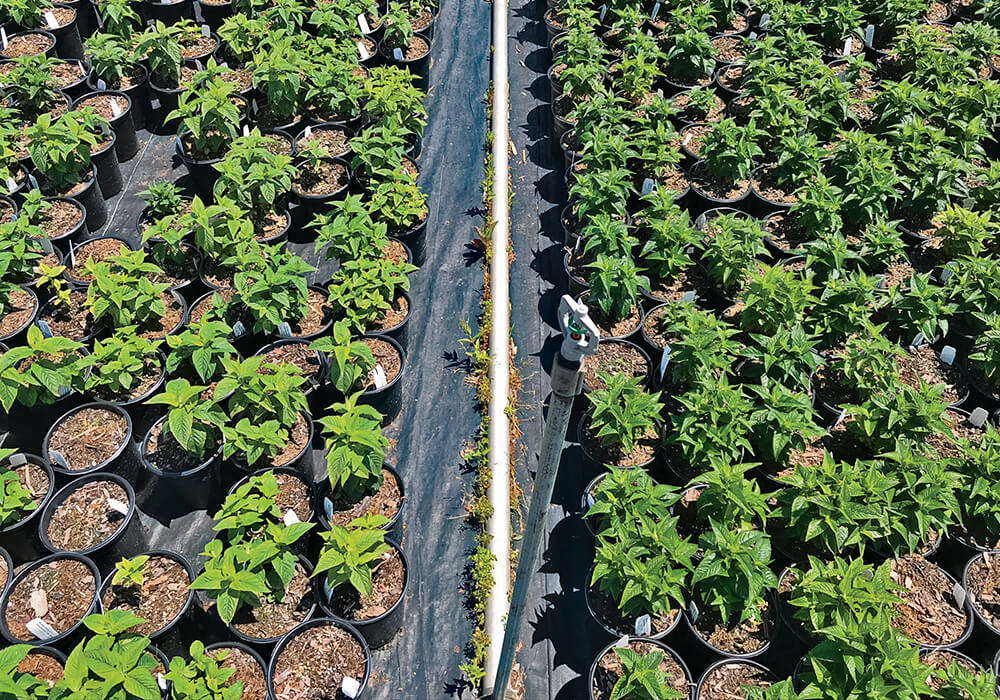 
Figure 1 shows a simple set up for making tea in a drum. Growing the proper micro-organisms is the key. During the brewing period the microbes increase in numbers, so you must be sure to use only healthy compost without pathogens.

The compost teas can be diluted and sprayed in fields in order to increase the amount of microbes working and feeding the plants. Also, this tea can readily be used as a spray on plant leaves. We did a preliminary trial last year (see Figure 2) and demonstrated a great difference between the treated plants and the non-treated plants. We also conducted an experiment on eight newly-planted maple trees: four were left as controls, and four were watered twice with a compost tea produced on-site. During the summer drought, the four treated trees were all saved and had leaves greener and larger than the four control trees. Two of the control trees also had their leaves dry out and they produced a very thin canopy.

Regarding the tea and compost itself, I think the main take home message concerns micro-organisms. We often forget about them, but they are the key to life! Let’s produce a quality compost and take our time to let it mature. It will be more sustainable that way!        Gilles Lapointe is a production advisor, in-house scientist, at NVK Nurseries in Dundas, Ont. Gilles holds a PHD from the University of Guelph in molecular biology and genetics. He can be reached at gilles@nvknurseries.com.