Landscape Ontario’s first president is a man of many achievements 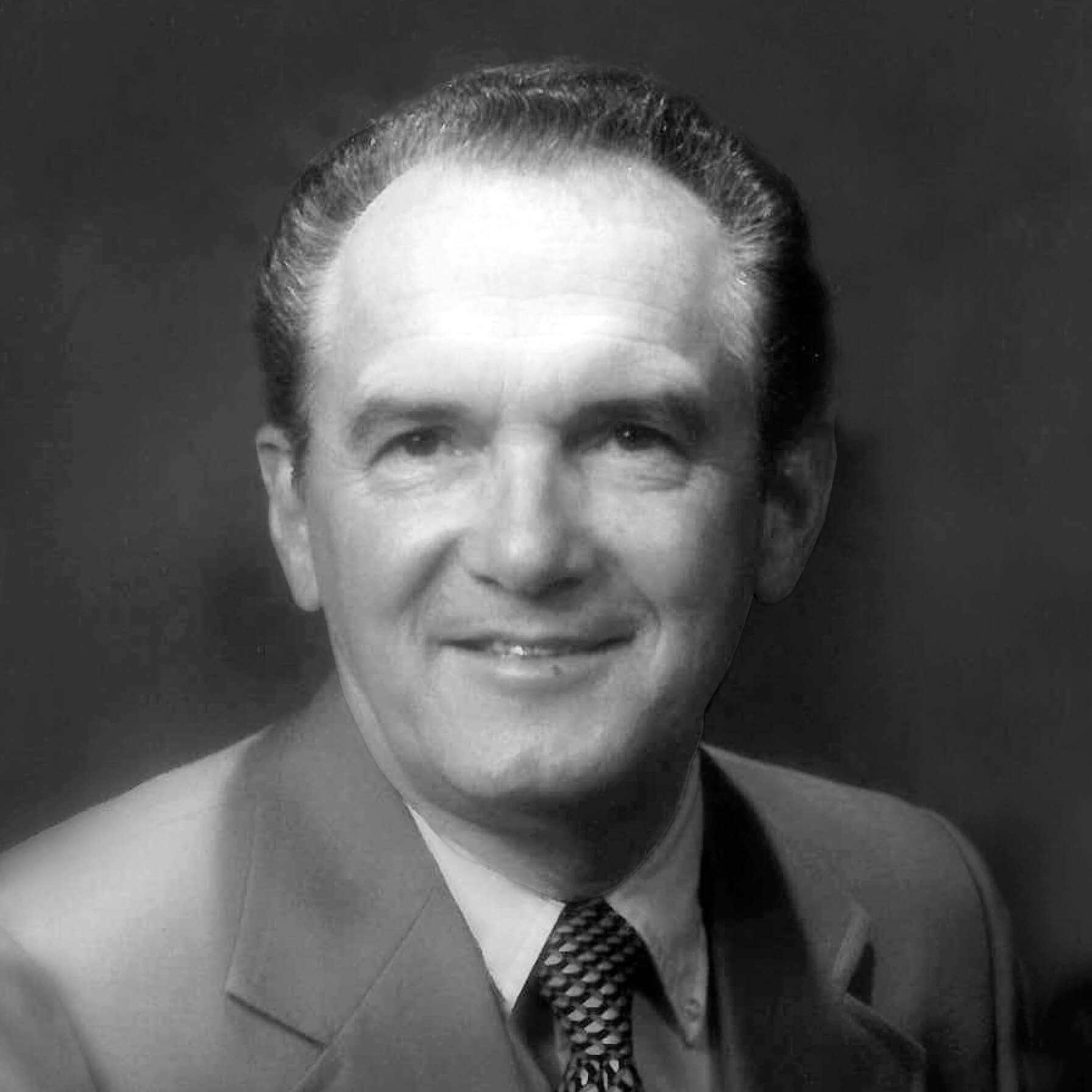 Glenn Peister
Everyone is familiar with the TV commercial introducing the most interesting man in the world. Landscape Ontario’s inaugural president can easily be described in that realm.

Glenn Peister of McLean-Peister Ltd.in Kitchener was among a handful of men back in the early 1970s who with foresight and determination worked countless hours to create a strong voice for their industry.

At the age of 92, during the interview for this article, Glenn Peister proved to have a very sharp memory. “It took many long hours to create one organization,” says Glenn.

At the time of the merger talks, Glenn Peister represented the OCLA, while Casey van Maris represented the OGMLA. “There were times that Casey and I were at loggerheads, but we became very good friends.”

Glenn says that the OCLA felt the industry needed a stronger voice. “Casey was also a strong proponent of consolidation. He felt that more companies coming together in one association would give us more influence.”

When LO was formed, Glenn Peister was quoted at the time, “This took years of effort by unselfish, far-sighted people who sought to improve and promote their chosen vocation.”

In his first column that appeared in Landscape Ontario magazine, Glenn wrote, “Landscape Ontario will develop, serve and prosper directly in proportion to the degree to which we collectively support it. We have a wealth of ingredients needed to make Landscape Ontario a vital force in the industry.”

The fee structure back than was determined by Workmen’s Compensation Board (WCB) numbers. According the 25th anniversary history book, a fee structure devised by Casey van Maris had 40 cents for each 100 dollars reported to the WCB. There was a minimum fee of $60, and the maximum was $1,500. “It was felt this graduated scale would be fair to both large companies and small,” says Glenn. 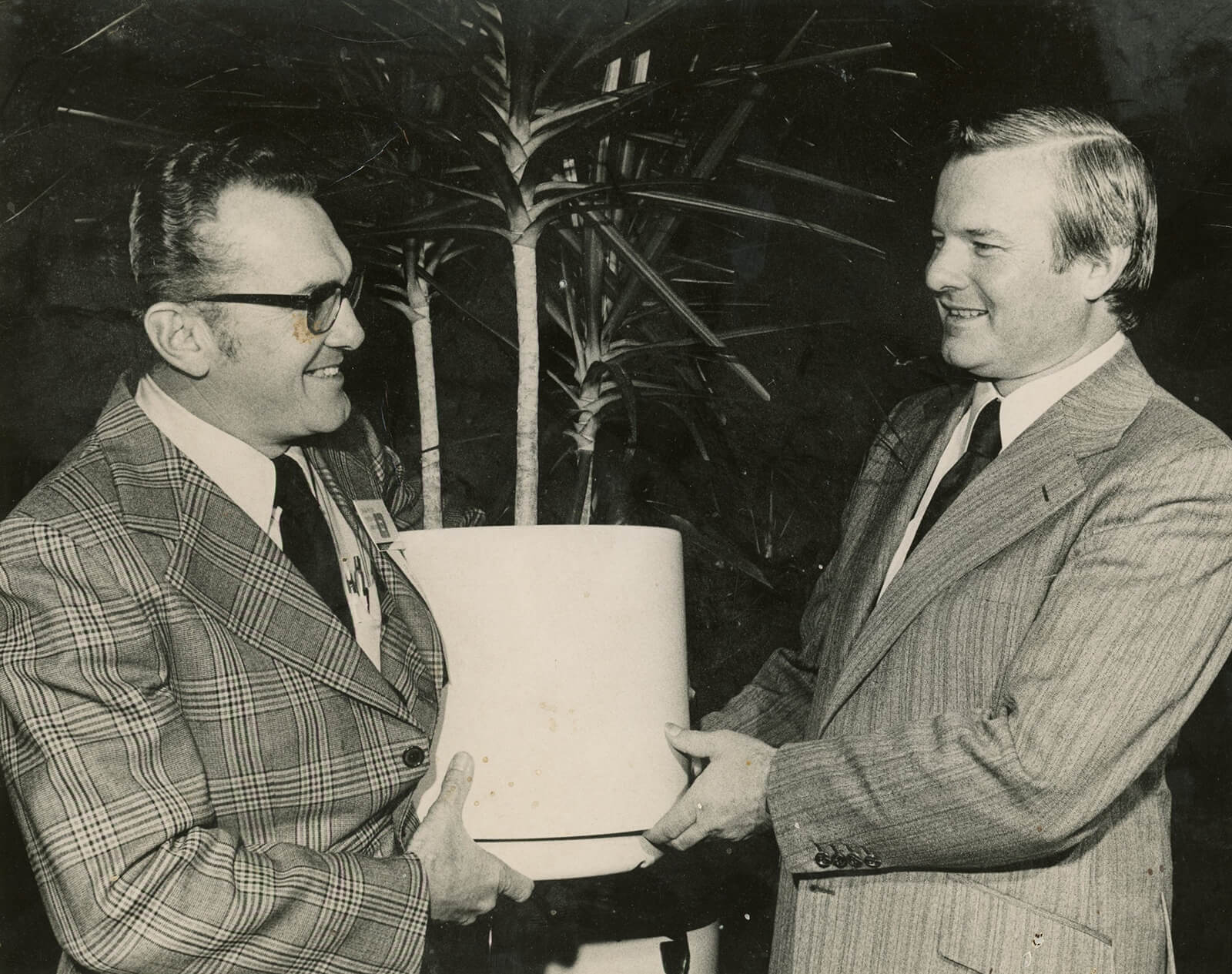 As president of Landscape Ontario, Glenn accepts the association’s charter from Premier of Ontario Bill Davis.

Many miles on car

This wasn’t Glenn Peister’s first experience at leading the way to create a new association.

In 1959, with encouragement from Leslie Hancock, Ontario Landscape Contractors Association was formed with 14 members. Glenn was also named the first president. Jean Wllsher, whose husband worked for McLean-Pesiter, was the secretary-treasurer for the association. The office was in her home. Dues were $50 for active members and $25 for associates.

LO’s history book says from inception the OCLA had clear-cut aims and objectives. In 1960, under the direction of Glenn, the OCLA established scholarships with the Ontario Agriculture College, now University of Guelph.

Humber soon provided the horticulture program. An interesting side note is that Glenn Peister went to speak with students at Humber about a career in horticulture. Long-time Landscape Ontario executive director Tony DiGiovanni was a student in the class at the time Glenn spoke to students.

Tony recalls the talk, because it influenced his choice in careers. “At the time Glenn spoke to the class, I was seriously considering dropping out of the course. His talk truly inspired me to continue on. Little did Glenn Peister know at the time that his talk would connect with a young student, who would go on to lead Landscape Ontario as executive director.
Name: Glenn Peister
Hometown: Kitchener, Ont.
Born: 1927
Company: McLean-Peister Ltd.
Volunteer Record: First LO and OCLA president
Awards: Certificate of Appreciation

Glenn received his B.S.A. degree in 1950, from the Ontario Agricultural College in Guelph. With his partner Don McLean, they began business in Guelph in 1950 and then created the Kitchener head office in 1952, where it remains today.

Don McLean passed away on June 15, 2014 in his 87th year. Like Glenn, Don also graduated in 1950 with a Bachelor of Science in Agriculture from O.A.C.

Glenn Peister is very proud of the fact that he has fostered at least 30 employees who later went on to start their own companies. He is also proud of the many long-term relationships with staff, many of whom have contributed 30-years service and more.

As a testament to the shared commitment of employer/employee relations, Glenn speaks fondly of Carlos Paiva. “Upon immigrating to Canada in 1968, Carlos became a highly accomplished superintendent, who remarkably continues at age 76 to provide invaluable service to the company.

As the company continued to grow and prosper, McLean-Peister evolved into a general contracting firm completing countless institutional, commercial and industrial projects. Some of the projects of note include Expo ‘67 in Montreal, the Sudbury Taxation Centre, York University campus, University of Guelph campus, Ottawa Art Gallery, Stratford Education and Recreation Complex, Carling Brewery plant at 401/427, many municipal sports complexes and golf course construction projects including Lionhead, Barrie National Pines and the City of Toronto municipally-owned golf courses. Glenn enjoyed the good relations that he established with many clients and landscape architectural consultants over the years.

Glenn led the company to diversify into large scale sod production and caliper tree farming with farms located in Breslau and Tavistock. These ancillary operations supplied sod and plant material for many of the contracts on which the company was the successful bidder.

Succession is also of paramount importance in the longevity of any firm. The company is now in the capable hands of Glenn’s eldest son, Al Peister and Glenn’s son-in-law Don Stalkie. They have been given the task of continuing Glenn’s legacy of careful planning, astute decision making and good husbandry. The third generation, in the form of Glenn’s grandsons, Brandon Peister and Fraser Stalkie have assumed active management positions within the company. Like Glenn, the MP management team remains focused on the future.

Although Glenn no longer keeps regular office hours at McLean-Peister, when asked if he still contributes, he answers with a smile, “I like to think so!” 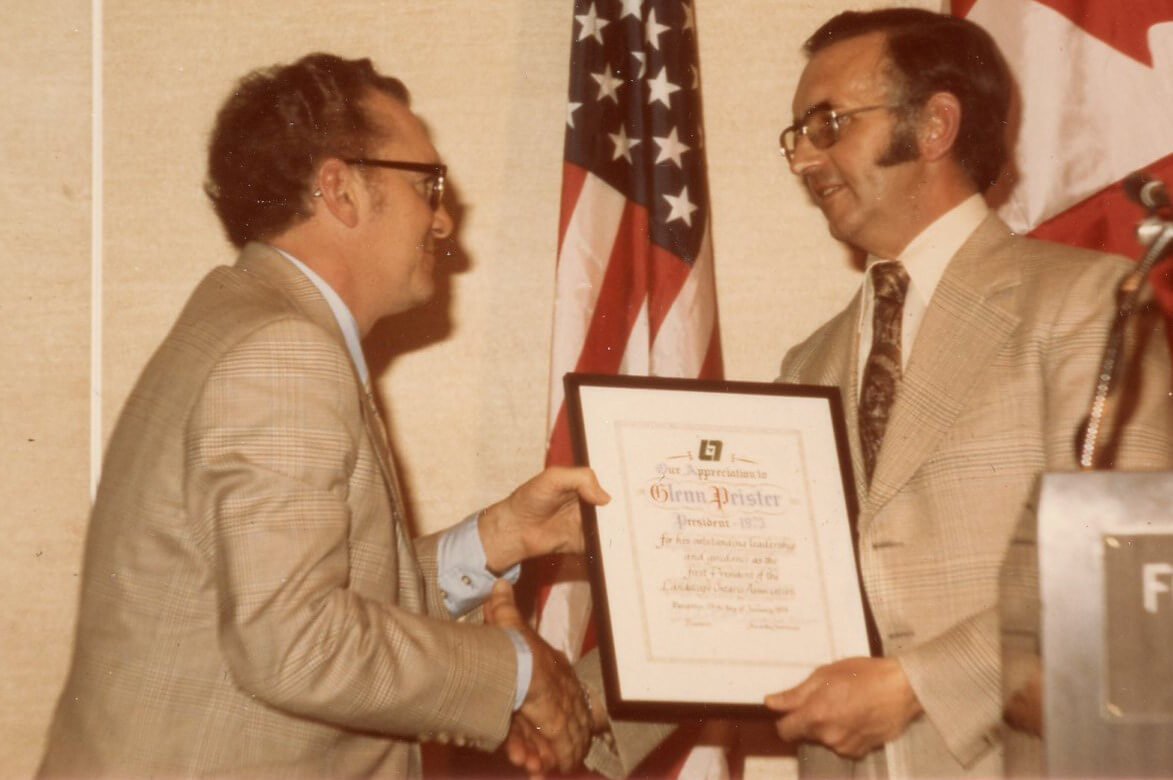 Creating successful companies and associations aren’t the only highlights in Glenn Peister’s life. His list of sports and political achievements is a long one. It’s all part of the many ingredients that make Glenn a very interesting man. His list of championships includes boxing, wrestling, squash and golf on provincial, national and international levels.

A Buffalo, NY newspaper article, dated December 10, 1948, states, “At 136, Sam Licata was pinned with a hammerlock by Glenn Peister of OAC.” The win helped the Ontario OAC team defeat Buffalo at the meet.

Glenn also was a hockey coach, and knows his way around a racquet club. He founded the Kitchener-Waterloo Racquet Club in 1962, and then he went on to win provincial championships.

His golf resume includes some outstanding achievements. He won the low gross award while teamed with his son, Al, during the annual Westmount Golf and Country Club Oktoberfest Pro-Am. Glenn also teamed up with his son Al, his wife Fran, and Canadian Golf Hall of Fame member and LPGA professional Dawn Coe-Jones to win the pro-am event during the Canadian Women’s Open Golf Championship at Westmount Golf Club.

Then there is the four-man team championship title at The Royal and Ancient Golf Club of St Andrews, which is the oldest and most prestigious golf club in the world. All four team members scored in the 70s.

Oh ya, and Glenn has potted five holes-in-one during his career.

Throughout his life, Glenn has been willing to contribute his time to important causes.

He served as chair of the Waterloo Township School Board and as Trustee on the Kitchener School Board, both of which have since been amalgamated into the Waterloo Regional School Board. Apart from civic duty, Glenn was focused on getting the best education for his own children and those of the many families in his community. 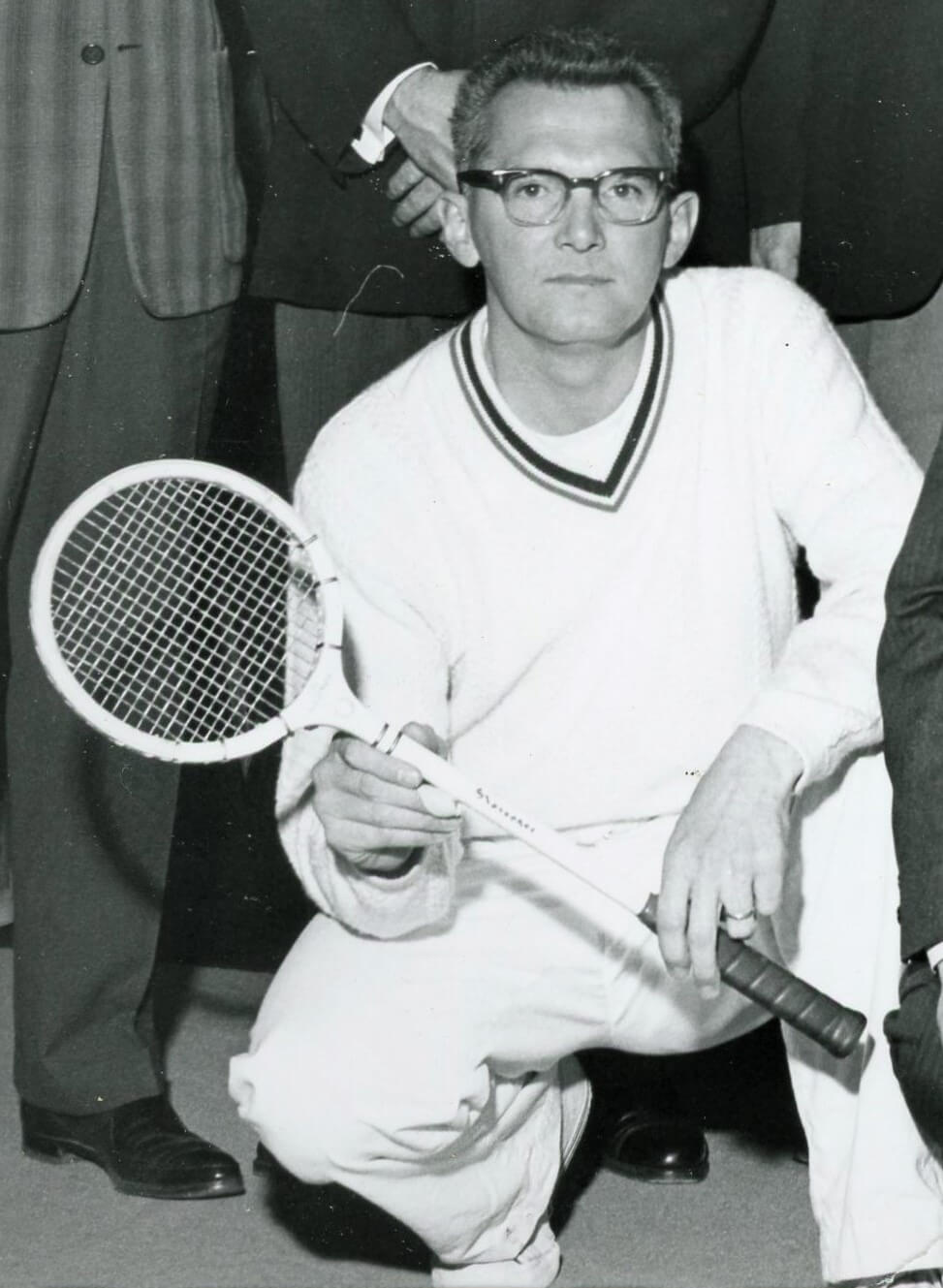 Glenn won a couple of provincial championships in racquetball. 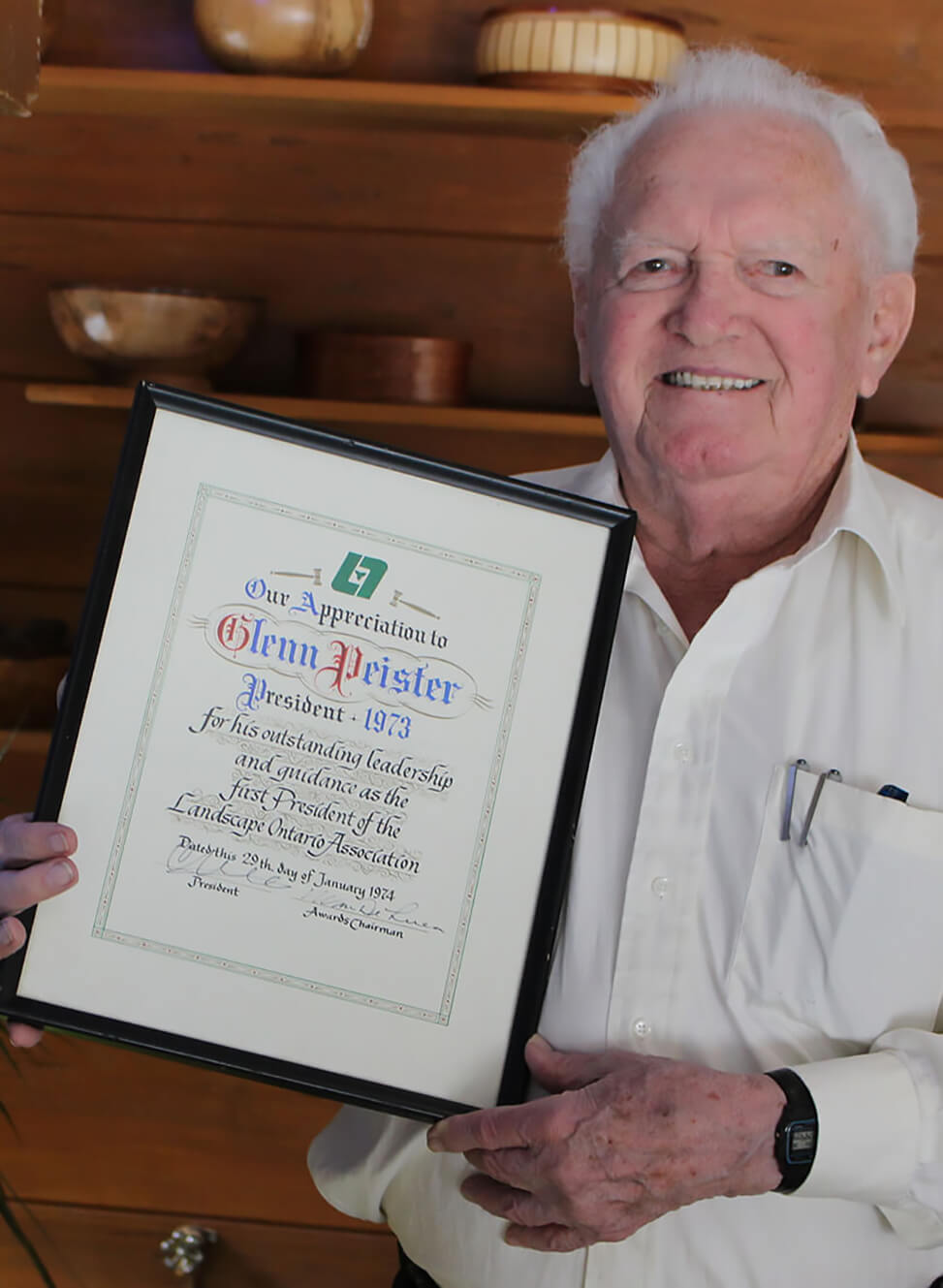 Glenn Peister holds the certificate of appreciation for his leadership as president.

Glenn continues to have a strong interest in horticulture. He has a prodigious knowledge of the scientific names of many plant species. When speaking about his alma mater, Glenn recounts his good fortune. “It was a great time of my life. It holds many fond memories. I had two great professors in Leslie Hancock and John Weall. We travelled, and met so many great people. We began teaching industry people how to estimate jobs.”

Glenn credits Lesley Hancock of Woodland Nurseries with stimulating his passion, curiosity and learning in the field of horticulture and landscape design. “Leslie stimulated me to see what was next. I consider him the father of horticulture in Ontario,” says Glenn. “I learned so much from him.”

Glen says Leslie Hancock started a guild in 1952. “It then became the OCLA, and from there LO.”

Lesley Hancock, founder of Woodland Nurseries with his wife Dorothy, was also an internationally noted horticulturist, plant breeder, soldier and politician. Today Hancock Woodlands is a historic property of the nursery originally owned by Leslie and Dorothy Hancock. It is a ten-acre oasis of natural and built heritage in the city of Mississauga.

Glenn Peister continues to keep a busy schedule. He still resides in the home he built in 1956 with Fran, his wife of 66 years. One of his current projects was the design and construction of a ten-foot-long, 400-gallon saltwater aquarium. He and Fran enjoy the ever-changing seascape of live coral and specimen tropical fish.

The industry is fortunate to have had Glenn Peister lead the charge to evolve his industry into a profitable, healthy and vibrant status it has reached today.

Members of the first Landscape Ontario Board of Directors