To obtain great canopy structure, Gilman says to prune away all competing co-dominant branches while trees are juvenile. Making these corrections early will make the most positive change without negatively impacting the tree’s ability to photosynthesize. As the tree becomes of caliper size, Gilman emphasizes the importance of maintaining the canopy structure by, “taking away all that is not the leader.” Another goal is to keep every lateral branch diameter less than half of the trunk diameter. Nursery growers and arborists can achieve this by making reduction cuts on laterals to slow growth. This is a common arboricultural practice in the landscape.

In the juvenile whip phase, leaving small laterals all along the lower stem is very important. You’ll commonly see whips growing in this manner in Ontario nurseries. These lower lateral branches are a huge source of carbohydrates and, because of their proximity to the root system, they actually contribute more significantly to root growth than the larger upper branches.

Quite often when we buy in whips, we receive small trees with naked trunks below the head and we know this is not a best management practice. Gilman encourages growers all across North America to grow whips with lower laterals intact since he has seen time and time again that trees grown in this manner will grow bigger and faster. Some growers in Florida will actually leave a bare stem of about eight inches just below where the canopy head should begin. This simplifies the task of removing those small laterals, leaving no room for error by workers. Some growers will begin to remove lower laterals a few at a time, while others will remove them all at once. 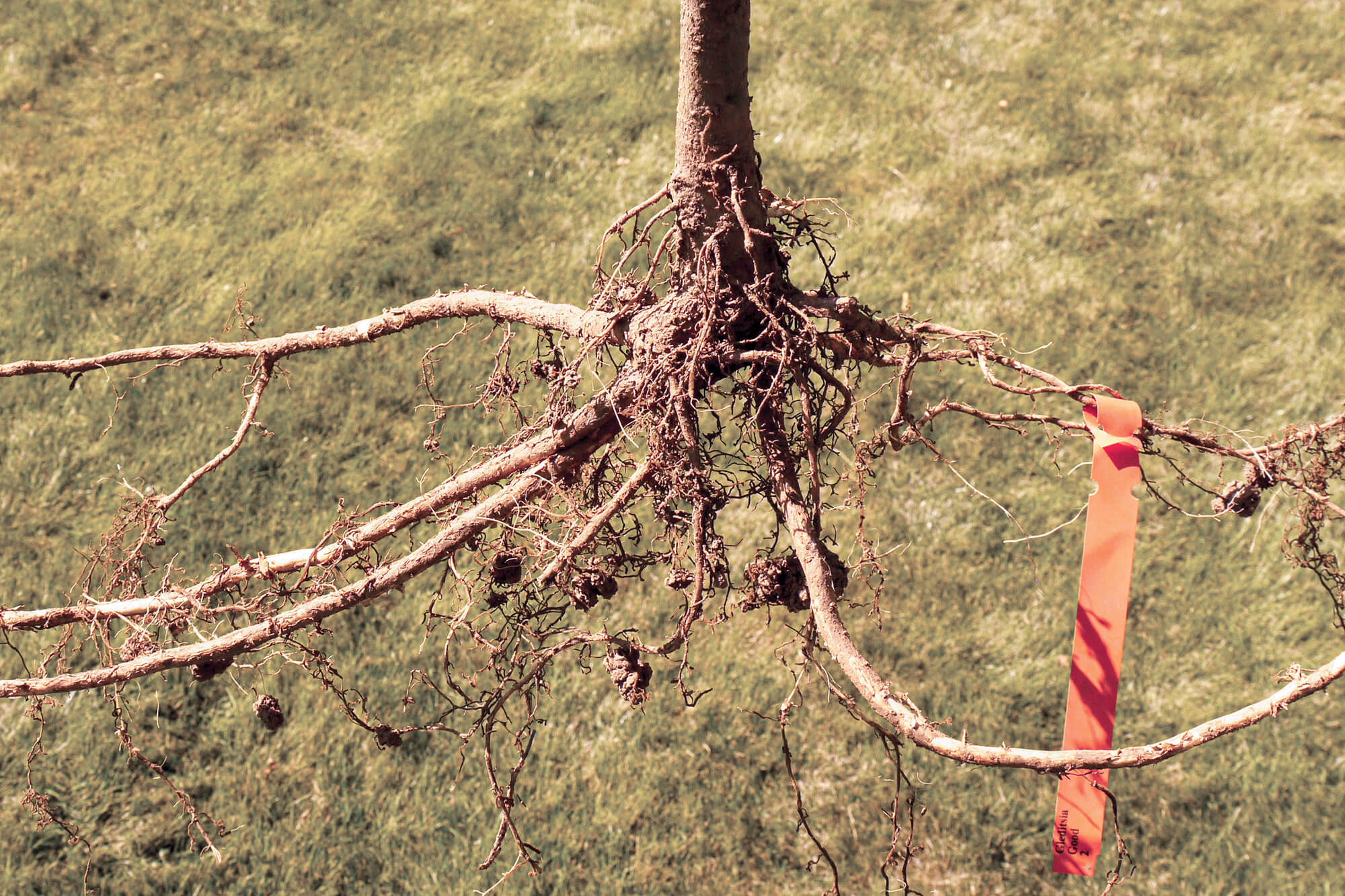 Good roots 2: Nicely horizontal roots close to the surface on this tree liner will result in quick establishment and excellent stability. Dr. Gilman spent quite a lot of time discussing root morphology and production practices that can reduce the incidence of circling roots in container production. In a large established tree that grows from seed in field soil, we will see most of the big roots emerging perpendicular to the trunk and extending horizontally beyond the canopy drip line. This is because the seedling’s tap root will grow down in the first year, and once it hits something it doesn’t like (e.g. clay layer), the tap root signals for lateral root production. New lateral roots will grow out from upper region of the taproot perpendicular to the trunk, and these laterals are important for anchoring the tree against wind by sending down sinkers as the tree develops.

Unfortunately in container production (and sometimes in seedling beds on light, fluffy soils), we sometimes see very few large lateral roots at the top of the root system. Instead of hitting undesirable conditions and growing horizontally, many of those large lateral roots are growing effortlessly, right down to the lower part of the pot (descending roots). This is because the tap root is growing in such a luxurious environment, it never hits a layer of media that it doesn’t like. If not checked, it will continue to grow around and around inside the pot, usually at the bottom. The problem is, once these container-grown root systems are planted in the soil, they produce an adventitious root system (very stressful on tree’s resources and can increase transplant shock) or even worse, those low laterals will start growing back up into the top layer of the soil (ascending root defects). Low-growing laterals do not contribute much to anchor the tree, and ascending roots can grow up and against the main trunk, causing bark inclusions that lead to vascular restrictions in the trunk and in those roots (girdling roots). 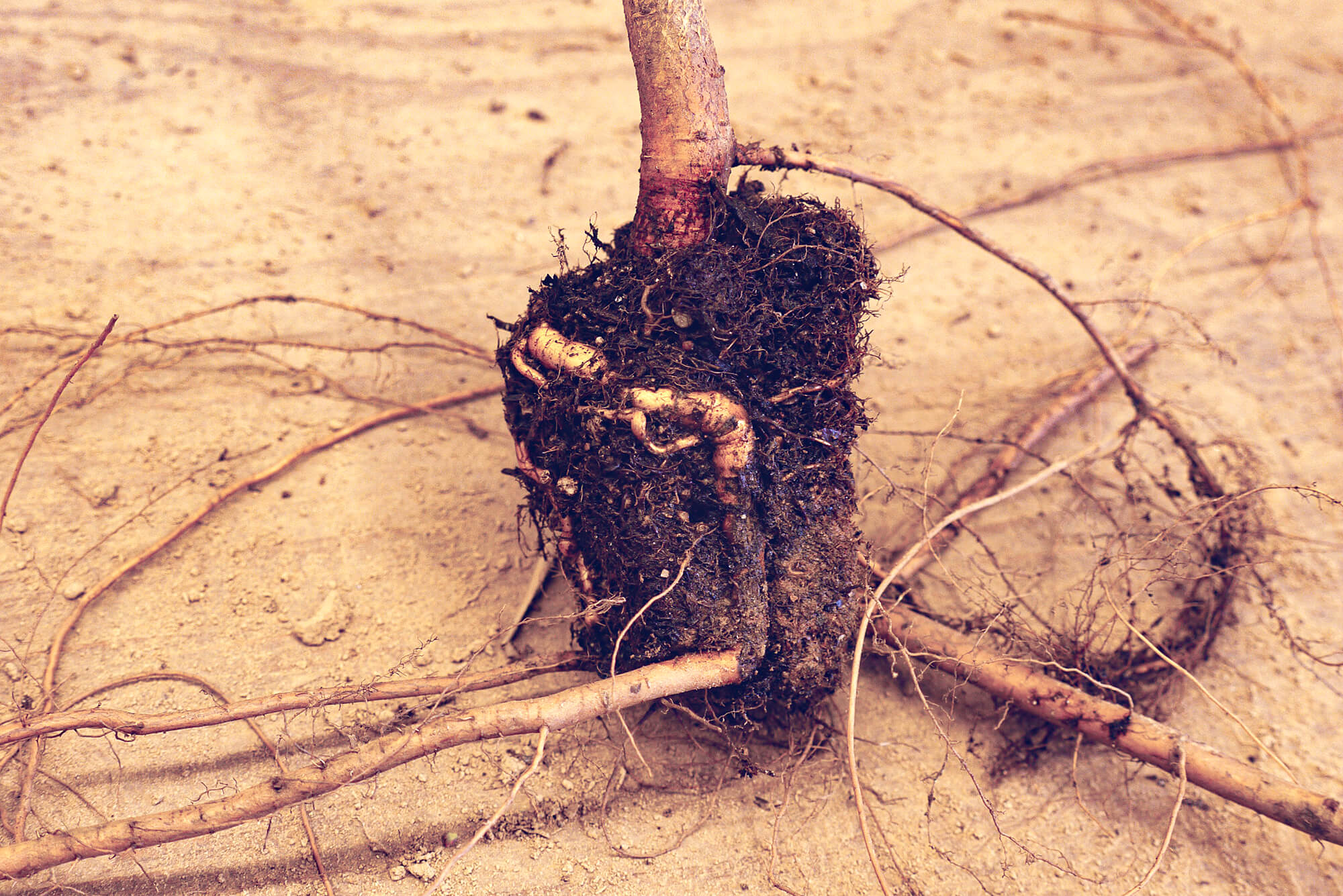 Bad roots 1: Deep containers with no air pruning at the side result in downward roots with most laterals too far below the surface. Many growers are utilizing various techniques to produce trees with horizontal roots at the surface. Jiffy pots, Elle pots and other propagation media systems are commonly used to help produce root systems that are more common in nature. They do this by providing a layer of air surrounding the plug media, instead of a smooth-walled plastic container. The media is held together by porous paper, by an open mesh or something similar so air can circulate around the media (‘air’ pot type system). When the primary root grows out into the air, it doesn’t like it and it sends a signal to produce laterals near the top of the root system. Once these laterals form and thicken, the plug is then transplanted into the next system. More and more, we are seeing container media systems that utilize air pruning in the stages beyond propagation, and that is key to producing a tree with a proper root structure.

What is interesting to note is that manually pruning root tips at the juvenile plant phase will not elicit the same response. Instead of signalling for upper laterals to form, multiple roots will be generated at the cut tip, which will lead to more descending roots. This causes a ‘root shank’ to form in the lower root region and that later, the tree will look like it was grown too deep. When these trees are transplanted into field soil, they try desperately to produce horizontal laterals. The energy expenditure will cost the tree a lot in transplant shock. In Gilman’s experience, some of the very deep containers used for plug production may also encourage descending roots, leading to an undesirable root system.

Gilman has followed the development of several hundred, or perhaps thousands of landscape trees in the United States that started either as a smooth-walled pot grown, an ‘air’ pot grown juvenile plant, or a traditional field-grown tree. As you can imagine, the root morphology of these trees can vary considerably, as we previously explained. Gilman and his research team then exposed these trees to 70 m.p.h. winds with a large wind machine.  Gilman’s team found that the trees grown in a system that allowed them to form proper horizontal roots were much more stable in the high wind experiment. Container-grown trees with some of the previously mentioned root defects did not stand up. It should be noted that transplanting a tree into a planting hole consisting of a heavy clay soil will also impede the growth of lateral, horizontal roots and even the well-structured root system can turn into a root-circling and root-girdling nightmare in planting sites of clay soil. 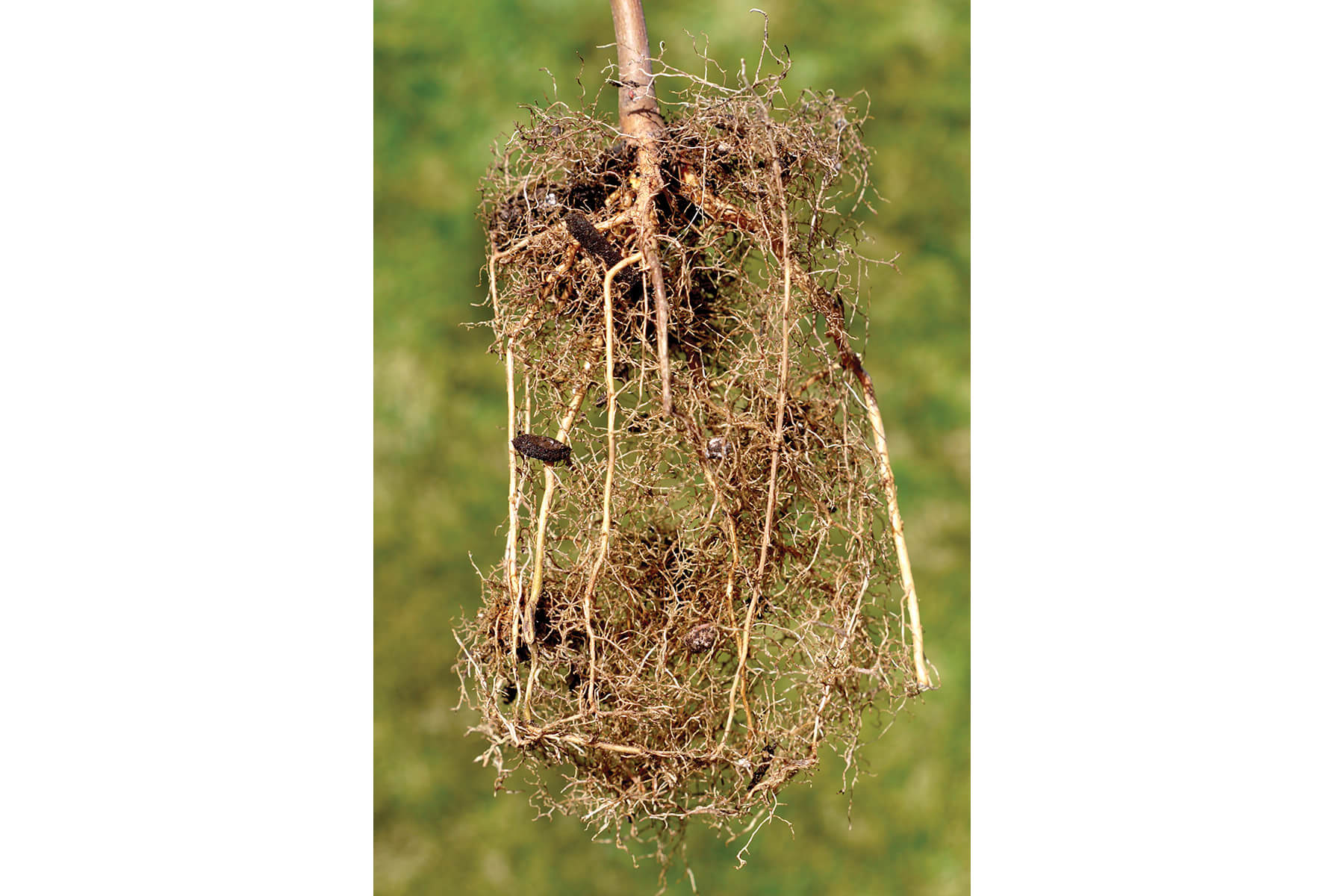 Bad roots 2: One year after field planting this seedling grew well. However, the imprint from the propagation container will eventually result in tree failure. So what can we do? If a container grown tree has a pot ‘imprint’ that is visible in the root system, can we correct this? Dr. Gilman has also been experimenting with root ball shaving and scissor-type pruners to remove long, circling roots and studying the performance of these trees. Some experiments involved more careful root pruning, just before the point where it makes a turn. Root shaved plants (1 – 3 gallons) can be salvaged, and research shows that you can get nice horizontal root system radiating out from the trunk that anchors the tree in the landscape. However, it takes extra labour and someone who knows what they are doing.

Growers buying plugs and liners from other producers may find some of these root defects already exist, and are not being corrected during growing on. Indeed, Dr. Gilman’s work has stimulated southern nursery growers to take a look at the root systems they are buying in, and now demand higher standards for juvenile trees. In Florida, tree liners are all grown in the state and many growers have formed an alliance to ensure trees are grown without root defects. Gilman says it took the Florida nursery industry about 15 years to adapt and change their practices.