Attendees took advantage of the opportunity to see what’s new on the market through face-to-face networking.

Share
Tweet
Mail
The 15th edition of Garden and Floral Expo experienced two days of positive reaction from both attendees and exhibitors.

Along with the traditional plants and decor, this year’s Expo featured some well-known alumni of the CFL, Michael ‘Pinball’ Clemons and Matt Dunigan. It all added to the positive atmosphere at this year’s event.

Show manager Heather MacRae, Director of Events and Trade Shows for Landscape Ontario, said that most people she spoke with had positive comments about the show. “We had some great feedback on Design Day and about the overall feel of the show.”

Chair of the Expo show committee, Michael Van Dongen, said, “A wonderful show once again! Our 15th year was amazing. I find with all our schedules these days, it’s still really nice to commit the time to slow down and talk with fellow industry people. It’s always a pleasure seeing what’s new and sharing stories of the year.”

Attendance at the 2014 show, held Oct. 22 and 23, reflected last year’s numbers. One prospective exhibitor scouting the show, who asked to remain nameless, said that what he really liked about Expo was that there were so many nursery company decision makers present in the booths. “That fact makes it very worthwhile for buyers to attend this show,” he said.

MacRae said many first-time exhibitors say they will be back next year. “That’s a good sign,” said MacRae. See page 7 a letter from Heather MacRae on the re-invention of Expo. 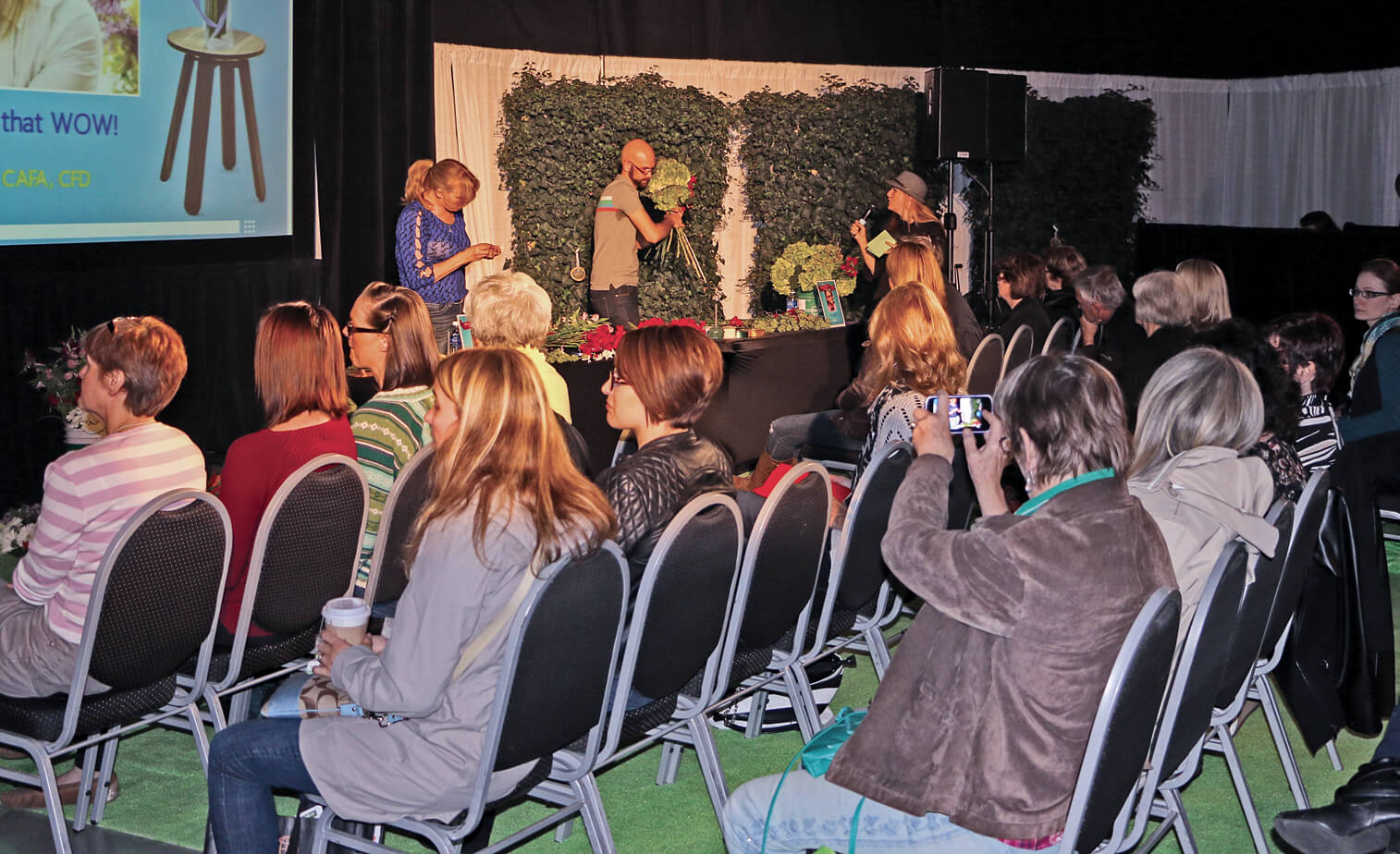 The floral design competition, moderated by Jennifer Harvey, was a lively, well-attended event. The opening day of Expo was Design Day. It featured respected industry speakers, Jennifer Harvey, an international designer, Marc Prudhomme and Yves Renaud, both of Planterra, as well as Karl Stensson of Sheridan Nurseries.

Harvey gave a presentation, Winter Florals That Wow, and hosted a design contest featuring a competition with five talented designers. The Planterra speakers highlighted the latest in the commercial Christmas decor business. At the Welcoming Reception, Stensson introduced speakers talking about the Top Ten Tips.

Thursday was Down to Business Day. Kate Seaver, well-known for TV and magazine appearances, began the day’s presentations with a talk on managing seasonal staff. She was followed by former Loblaw vice president Peter Cantley, whose topic was on driving seasonal sales.

The final presentation of the day was by Laurie Scullin, of The New Product Group, and Frank Zaunscherb, of ZRB and Glacier Digital. Their talk centred on branding a business. 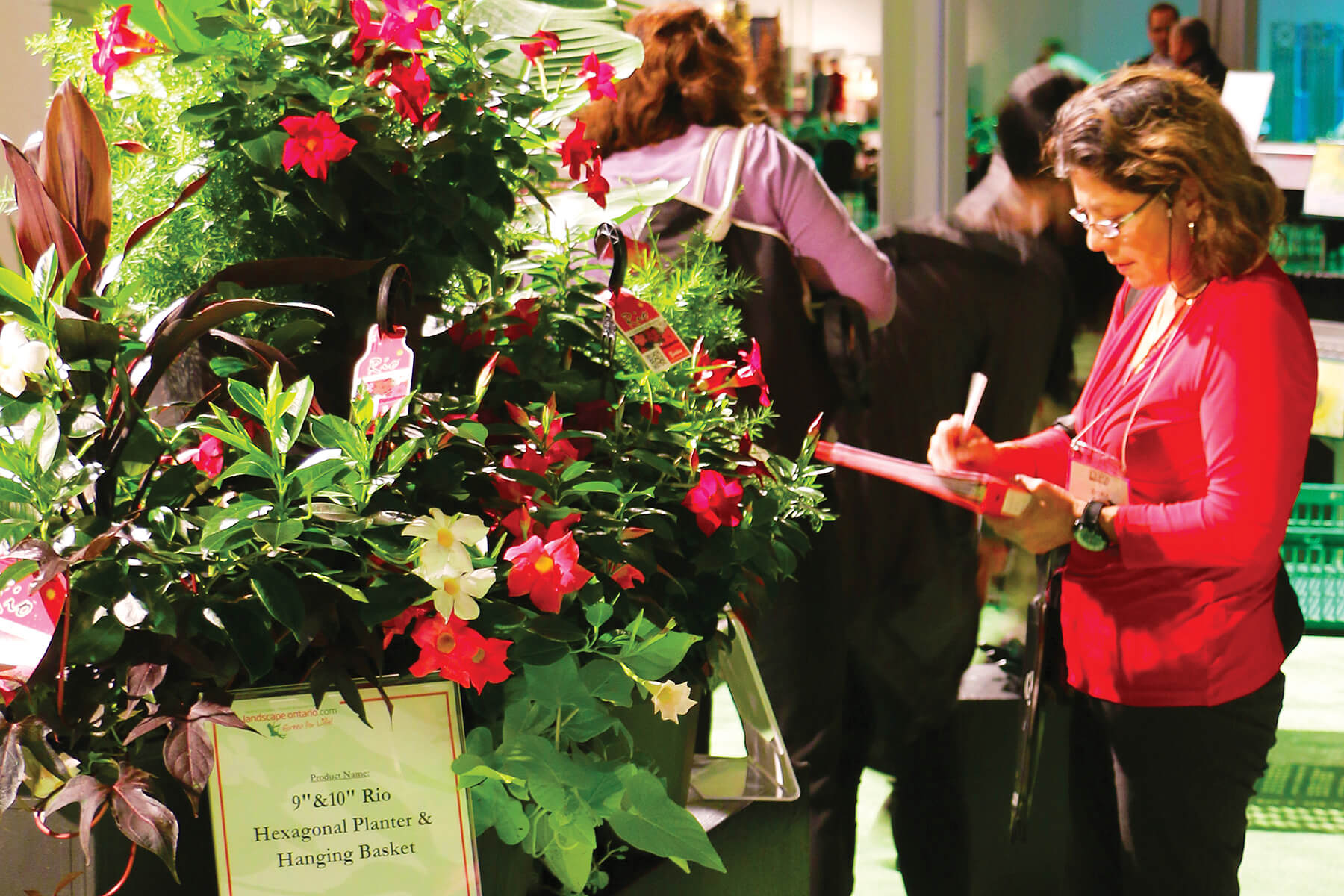 The New Products Showcase drew a great deal of attention at this year’s Expo.

This year’s New Product Showcase featured the latest retail products that will hit store floors in 2015. Products ranged from plants to equipment to specialty items.

One item that attracted a great deal of attention was the Never Alone rose, which is the new symbol of a national charity committed to improving the lives of people affected by cancer.

LO member J.C. Bakker and Sons, of St. Catharines, brought in CFL alumni Matt Dunigan and Michael ‘Pinball’ Clemons to promote the rose and foundation. Both athletes attracted a great deal of attention to the Bakker booth and the Never Alone campaign.

Clemons will be the featured speaker at the 50th IPM Conference on Jan. 5 at Congress 2015. 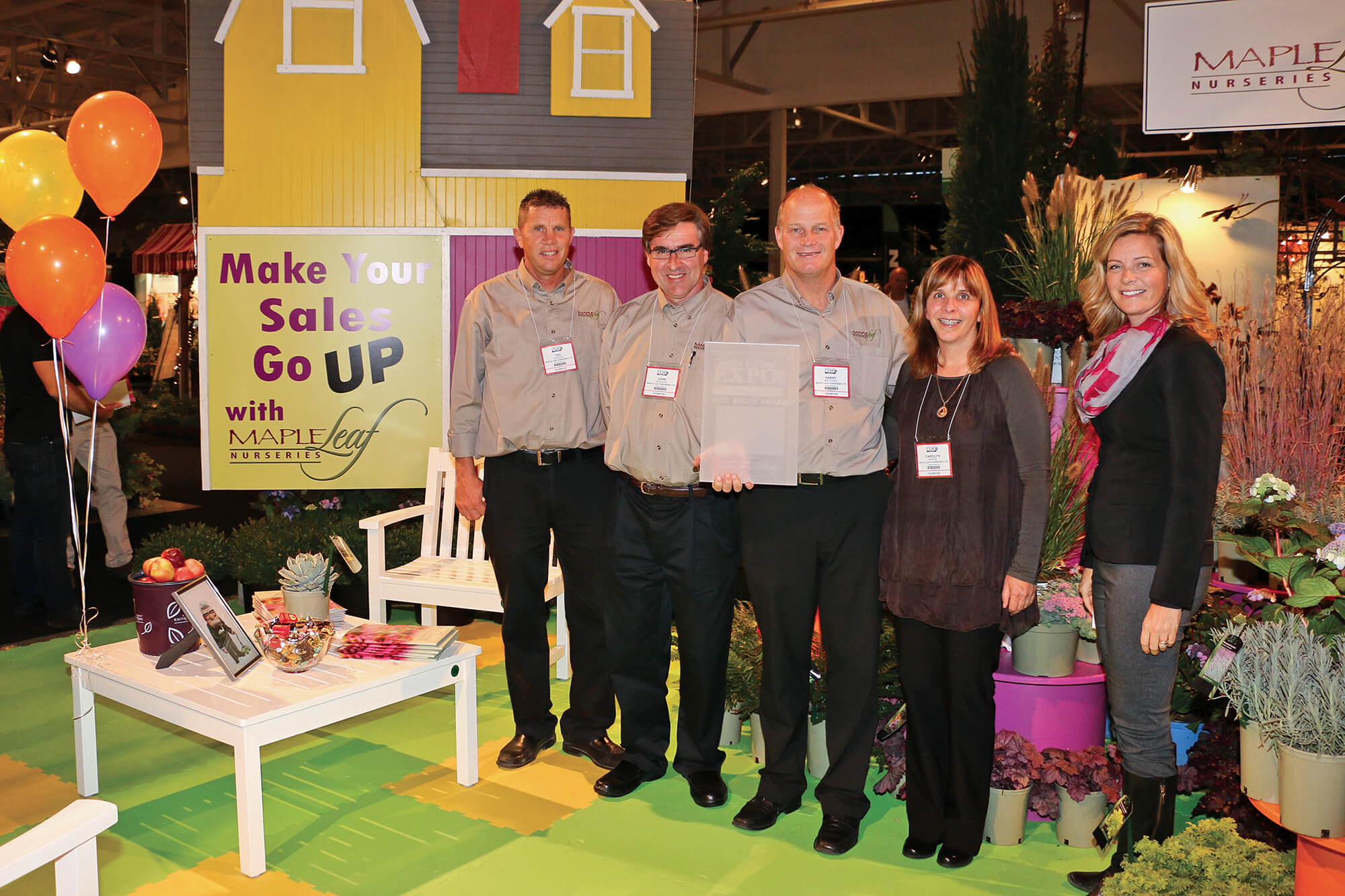 The best booth winner of Expo 2014 featured a familiar name. For the fourth consecutive year, Maple Leaf Nurseries of Vineland received the nod for the best booth over 200 sq. ft.

The other winning exhibitor was Mar-Co Clay Stone, of Bright, which won for the best booth under 200 sq. ft.

“There was a definite ‘wow’ factor with some of the booths that are designed for Expo,” said MacRae.

The booths were judged by Terry Childs, president of Nature’s Way Landscaping in Gananoque, and Martha Walsh, manager of the GreenTrade Expo in Ottawa.

“Maple Leaf Nurseries and Mar-Co Clay Stone put together booths that encouraged a vital connection between the exhibitor and the patron,” said Childs.

The next big event for Landscape Ontario is Congress, from Jan. 6 to 8, at the Toronto Congress Centre. For more information on this event, go to locongress.com.