Enriching the lay of the land

Much like a father figure paves the way for his child’s life by imparting the valuable skills and knowledge needed to be successful and happy in life, you could say that Charlie Wilson’s father, Bruce, also helped forge a career path for his son.


Learning the ropes and taking the helm

Charlie had always been involved in landscaping in one way or another, thanks to his dad’s business, Bruce Wilson Landscaping, but he officially became involved in “a meaningful way” in the mid-1980s. A formal education was the logical extension for Charlie to pursue a career in something he’d always enjoyed. “There was a lot to manage as we had a large lawn maintenance and snowplow business at that time. Charlie worked alongside his father for many years. “My dad was very proud,” he says of taking on the business. After graduating from Humber College’s Landscape Technician program in 1989, Charlie transitioned into the landscape construction division of the company. Sadly, Bruce passed away in 2011, after his battle with cancer.

In addition to attending Humber, Charlie is also a certified arborist. He was encouraged by a friend to write the International Society of Arboriculture (ISA) exam and decided to go for it. “Writing and passing the exam was a validation of the landscape program at Humber College and specifically the high degree of education we received from Ian Bruce who taught the arboriculture course,” he says.

Does this arborist have a favourite plant, shrub or go-to piece of greenery? Charlie says his favourite tree is a gingko. “It’s virtually maintenance free!” he notes.

Bruce Wilson Landscaping was originally built on snow removal services but the transition to operating as a diversified general landscape contractor to serve municipalities and development communities exclusively was a natural progression. Charlie oversees his company’s work on the municipal parks, streetscapes, storm ponds, new corporate headquarters, and new industrial/commercial buildings. He knows it wouldn’t have gone so smoothly without his talented team and he acknowledges they are his best asset. 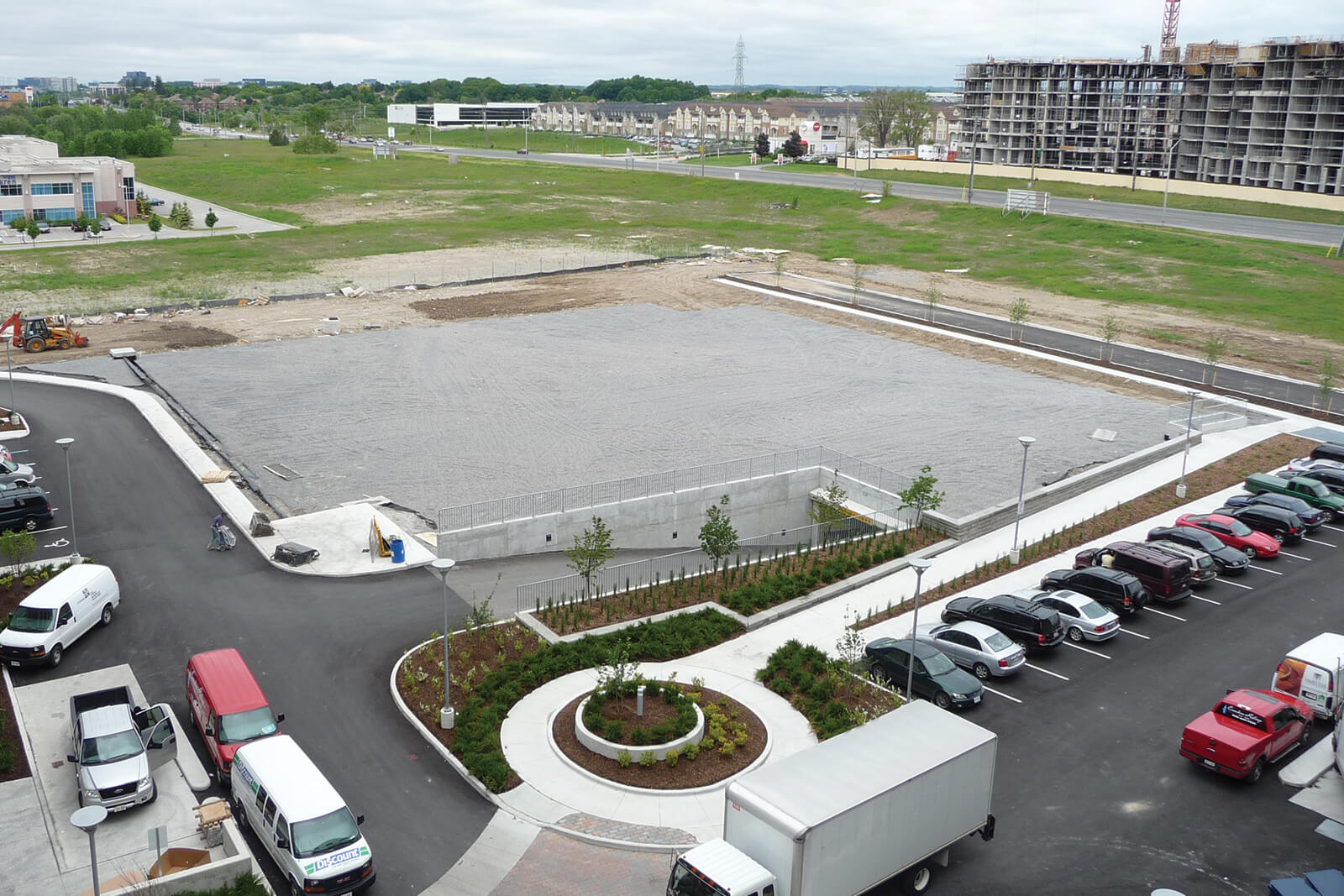 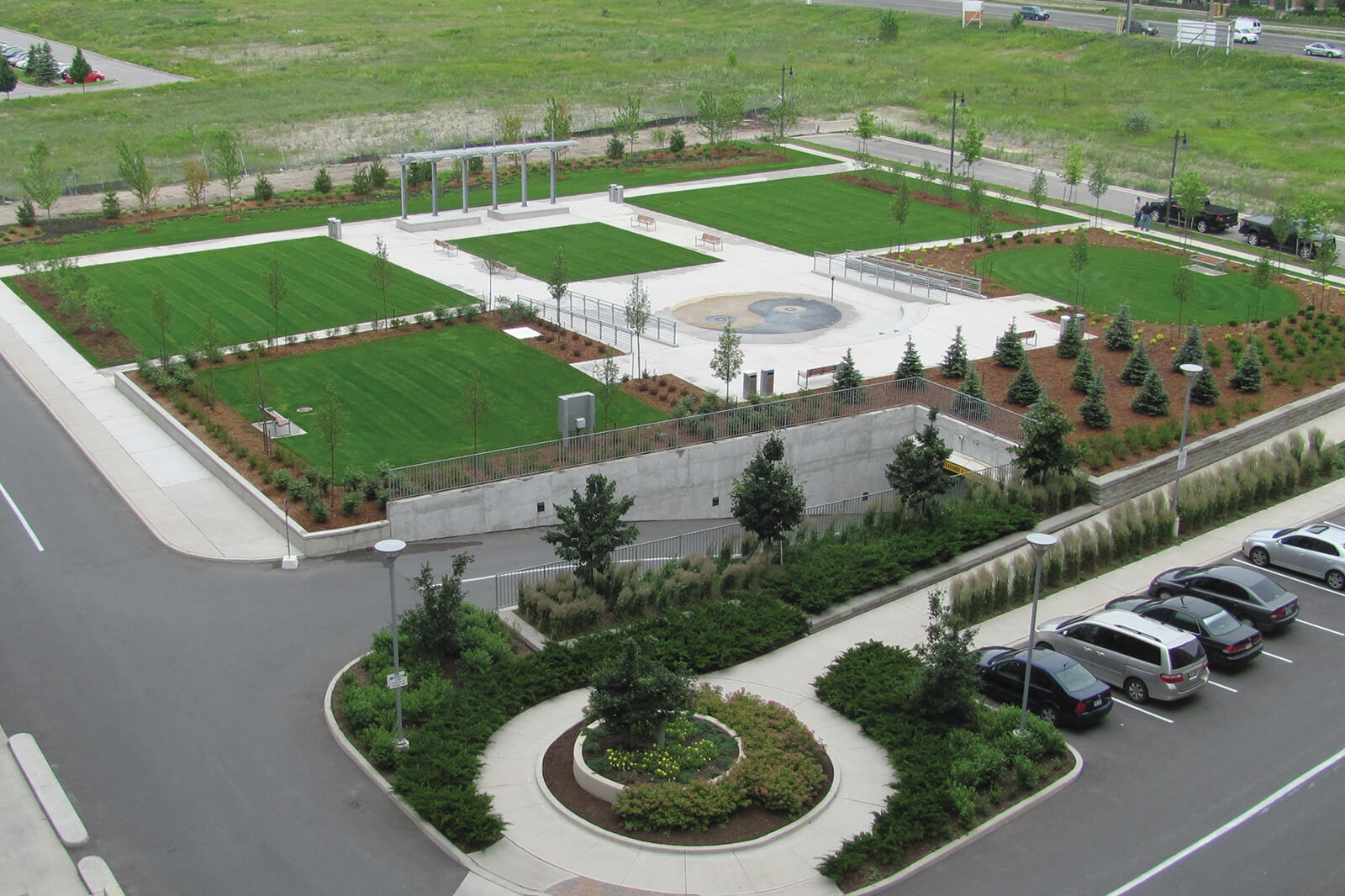 Before and after images of this award-winning project that featured a waterplay park on the roof of a parking garage.

Greening up the neighbourhood

For the last number of years his business has focused on commercial and industrial projects exclusively, which involve a lot of site plan work — everything from trees and subdivision installation, to park construction, storm ponds and valley landscaping. Public green space that everyone can enjoy is vital to that feeling of comfort and gives residents a sense of pride in the community in which they live. In 2016, Bruce Wilson Landscaping received the Caterpillar Award of Excellence in Commercial Landscape Construction/Installation at the CNLA National Awards of Landscape Excellence for their work on Frank Stronach Park in Newmarket, Ont. “Getting the recognition from our industry was quite nice,” he says.

Charlie says he maintains a stable of year-round workers, but wintertime could be his favourite time of year since he likes to jet off to his favourite destination: Florida. “I go there about five to six times a year,” he says. When he’s not jet-setting to warmer climates, home is where he spends much of his time. And of course, his property is well landscaped.

Volunteering is also important to Charlie and he has dedicated his time for the last five years to fundraising for the local food bank in King Township. “It’s is a fairly affluent area and I was surprised there was a need for a food bank,” he explains and was astonished to learn that there were more than 200 people using the service each month — 60 per cent of whom were seniors and children. “It is important to give back to our community.”

Charlie is looking forward to a busy year ahead and he’s recently taken a seat on Landscape Ontario’s Building Committee. The LO building is under a major renovation and retrofit. “It’s been exciting,” says Charlie, who was encouraged to participate by way of request from LO Executive Director,Tony DiGiovanni, who also happened to be one of Charlie’s instructors at Humber.