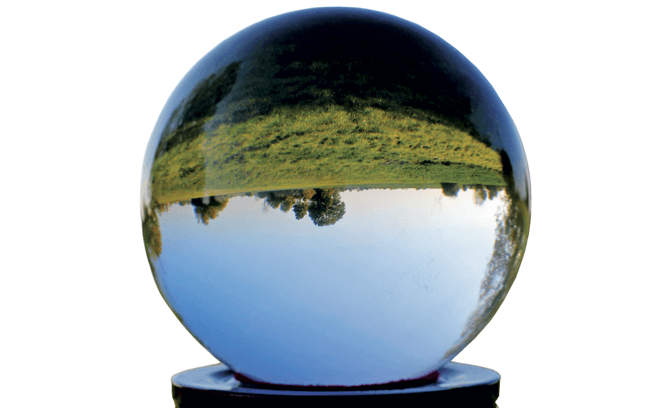 Can we see the future?

If I was incredibly talented at predicting the future, I would not be writing this column. No, I would be at the horse races, picking the winner of every race, or perhaps living in Las Vegas. If I could predict the future, I would own the stock market. I would know when not to crack a one-liner with my wife in the room. I would never be in trouble again. She never fails to remind me, “You’re not that funny,” which always makes me laugh for some odd reason.

This conversation comes as a result of others I had with two people from our trade, Keith Carpenter from Van Noort’s and Michel Touchette from Jeffries Nurseries. Both conversations discussed the shrinking number of independent garden centres. As owners retire, there is no second generation to take over operations, nor are there waiting buyers. Many operators who wish to retire sell their land and buildings for another purpose.

Even in Regina, I have seen several independent operators go out of business. Some, because they were poor managers, and others, because they were getting older and wanted to wrap up their working careers. They sold their lands and auctioned what they could. What was left was often bull dozed to make way for housing or commercial developments.

I am not a negative person, either by choice or by personality. I have always been a glass-half-full type of fellow. While I record and report the diminishing numbers, and I do so with great sadness. I also see a recovery in the future.

At this juncture, I am going to jump ship from garden centres to restaurants. There was a time when independent, family-run restaurants dominated the Canadian landscape. There were very few chains. Large dining rooms and coffee shops were limited, for the most part, to major hotels in bigger cities.

Every small town had one or two family-owned cafés that served the surrounding district. Today, as I travel the back roads of my own province, I am astounded by the lack of these cafés, often replaced by the Subway chain.

The demise of independent cafés was so apparent 30 years ago, that a fellow who owned several bars and restaurants gave an interview to the local newspaper. He said: “How do you make a million dollars in the restaurant business? Start with two million.” He was a member of ‘the glass-is-half-empty’ club and I did not appreicate his negativity. I wanted to write to him, but I didn’t, “Just give up then. Tell everyone not to bother to keep going.” He was a terrible ambassador for his trade.

Something has been changing the last 20 years, and changing for the better. In spite of competition from large chain restaurants that populate every Canadian city, independent cafés have been emerging. Each month, there is an article about a new place serving a different menu. Most are chef-owned. Chefs, who want to make their mark on eating out and not spend a career flipping burgers or at Red Lobster. Chefs who have dreams and work hard to make them come true. So far, so good. I keep getting emails from friends asking if I have tried this place or that. My friends often rave over how good a dish was at a café or bistro. They write, “I have never liked cauliflower before I ate at their place.” An interesting review. Also interesting to note is that these new and emerging eateries charge a good dollar. They have little desire to give their labour away.

In Regina, we have many Indian restaurants serving buffets, offering a bit of butter chicken, saffron rice and naan bread. After a while, they blend together. One new operator did not wish to compete for the buffet crowd. Instead, he offered plate service, each dish freshly prepared, and he chose to use high-end ingredients. Let’s face it, when you are running a buffet, quantity is often ahead of quality.

The new fellow started out as a hole-in-the-wall, calling his place The Caraway Grill. He was off the beaten path. I heard the continuum of compliments and had to try it for myself. ‘First-rate and filled with flavour’ was my review. Others had to give it a go and now, he has built an addition on the back of his place, doubling its size. A success story in the midst of competition. Many of his regulars would best be described as zealots or apostles; he succeeded as lower-priced competitors struggled.

Is there a point? Yes, and it is quite simple: There is hope for our industry. There are lessons to be learned from these up-and-coming chef-owners. They have succeeded by offering unique dishes, something different than the same old, same old. They offered wines and beers no one else was serving. Let Arby’s sell their version of a roast beef sandwich. Let Swiss Chalet flog their quarter chicken dinner special. Let Earl’s, Original Joe’s, The Chophouse and all of the others do what it is they do. They will always have a certain clientele — and let them. Just as we have Costco, Superstore, Home Depot, Rona and Lowes. Just because they sell product does not mean they are satisfying every customer’s wants, needs and desires.

While the box stores and chains race to the bottom, with lower pricing emphasized far ahead of quality, we need not participate. Henry Ford used to offer his cars in any colour you wanted, provided you wanted black. Ford had to change and adapt, because they could not maintain market share with an outdated business model. And that has too often been the story of the green trades. Not all, but some, have refused to update and there have been consequences. Not everyone wants a black car.

When I started out in this trade of ours in 1977, there were growers who offered plants by the dozen, in maché trays, growing in a mud-like substance. When wet, those trays were extremely heavy. Carrying two was a struggle, especially for older people, and not everyone wanted 12 cucumber plants. One ‘old school’ grower had a chalk board at the front of his greenhouse indicating prices. Nowhere else in his quite large greenhouse were prices. If you wanted to know how much a basket was, you had to take it up to the cashier and ask. His sales dropped 70 per cent over a 20-year period. The last time I visited his greenhouse, all he had for customers were two elderly ladies who were propping each other up. A model that once had worked had run its course.

There were growers and retailers in the ‘70s and ‘80s who refused to sell perennials. Most would not build displays. Some had no carry-out or delivery service. All are now gone — in spite of mumbling, “But that is how we have always done it.” I can’t make this stuff up.

On the CBC National News the other night, there was a report about online merchants moving into brick-and-mortar stores. I know there are people who order as much as they can online; one of our sons is so inclined. At Christmas, a gift from him arrives from Amazon. But just as there will always be a certain percentage of dedicated online shoppers, there will always be a number of people who want to see, touch or smell a product before buying. That is our market.

In the future, those who will be doing well are those who are offering something different. Products that are either exclusive to their operation or are difficult to find. Those places that offer an excellent choice in variety and colour will also benefit. I was in one of the box stores this summer. They displayed a large number of pink impatiens; decent quality at a lower price than the independents. Here was the kicker; all they had for impatiens were the pink ones. If you wanted white, purple, red, lilac, or hot pink, you were out of luck. Again, the Henry Ford scenario applied. Available in any colour as long as you wanted pink.

I predict that as with the cafés and bistros, there will arise a group of small independents, operated by their owners, who have a passion for the business. People who have a strong desire to do things differently and are willing to take a chance on new products and plants. Consumers will describe these places as being ‘special, different, a boutique.’

I also predict that those places, new or old, who continue to emphasize service will have a high success rate in the marketplace. Information will be a strong selling point. There is an entire generation who have now grown up never having learned how to plant or to garden. Many in their 20s and 30s have never mowed a lawn, a once mandatory Saturday morning chore for a school boy.

There is no reason for the independent, whether their operation is new or been around for 50 years, to compete with the box stores or to emulate their business model. That is a recipe for disaster. The box stores are very good at what they do. They move a lot of product at a low price with next-to-no service. To follow them down that path is not the road to success.

Dinosaurs used to rule the earth. So did old-school growers, retailers and contractors. The dinosaurs are gone. That should tell us something. Stay on the road to success.