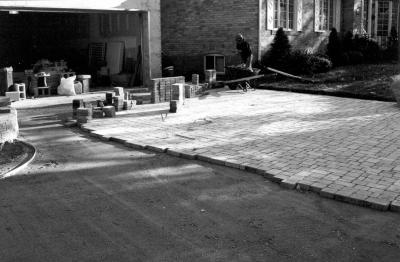 The following case study features a landscape upgrade project completed as part of a total home renovation. Projects of this nature are becoming more common as the baby boom generation purchases and renovates older homes. The landscaping industry is growing at a rate almost double that of other sectors of the economy. It benefits from the strong performance of the economy, low interest rates, consumer confidence and an active market for sales of new and existing homes.

There is a trend towards increased dollar value investment in “upscale” landscaping projects. A growing recognition of the value added to residential properties is expressed through high quality, professional landscaping.

This willingness of homeowners to invest in landscaping is a positive sign for the industry. It’s also interesting to note that Canadians are willing to invest almost twice as much on landscaping as homeowners in the U.S.

The homeowner retained an architect and landscape architect during the winter months who coordinated designs and specifications for upgrades to the suburban property. These two professionals also provided on-site quality control and inspection services to ensure that the work was completed according to the drawings and specifications.

The suburban roadway adjacent to the house was very close to several schools and received a considerable amount of traffic. For safety reasons and convenience, the landscape architect recommended the installation of a driveway that was large enough to incorporate a turn-around space for cars. This extra space also provided parking space for occasional visitors to the owner’s home-based business.

Once the drawings and specifications were complete, the homeowner requested quotes from three experienced landscape contractors. After careful consideration by the design team and homeowner, a proposal prepared by a local ICPI certified contractor detailed the construction sequence and materials. It was accepted with a few minor modifications and work began shortly thereafter.

During the initial stages of the project the contractor staked out and marked the locations of the property lines, the perimeter of the driveway and walkway. He also took time to speak to the neighbors on both sides of the property about the scope of the work.

The contractor began the construction by removing and disposing of the existing asphalt pavement. Workers quickly excavated the soil to a depth of approximately 350 mm in preparation for the delivery of granular base materials and bedding sand.  As per provincial standard, no limestone screenings were used. The base materials were installed in 100 mm lifts and compacted to the specified levels 95 per cent modified proctor density using a large heavy-duty vibratory plate compactor. Special attention was paid to achieving full compaction around the concrete curbs and retaining wall installations where settlement might occur. In several areas where the compaction equipment could not be used because of space limitations, workers used hand tampers to compact the soil and base.

On the following day, the ICP units were delivered to the site. The bundles were placed in locations efficient for the placement of paving units over the screeded bedding sand surface. Working quickly over a three-day period, the installation crew, using paver carts to move units around the site, installed the interlocking concrete pavements and manufactured edge restraints in accordance with the plans and specifications. On this site, the pavers were installed to a finished elevation approximately 7 mm above the top of the installed edge restraints.

Curbstones were installed along the perimeter property lines and where the driveway abutted with the neighbour’s gardens and lawn. The contractor was also careful to slope the driveway away from the house towards the street. The slope required to allow rapid drainage was about a 20 mm fall every 1 m, or about a two per cent slope.

Pavers gaining acceptance
The project involved the installation of tumbled paving units in a neutral colour that coordinated nicely with the colour of the house. Tumbled pavers, judging from comments made by many paver manufacturers, are gaining an increased share of the market. Pavers are placed in a large cylindrical tube about 2 m in diameter. The tumbling machinery can be adjusted to customize the appearance of the pavers.

In other words, the manufacturer can change the extent of the rough hewn surface of the pavers by altering the speed at which the drum rotates, the moisture content in the paving units, and the number of paving units in the tumbler during the tumbling process. The designer and the homeowner built mock-ups of several different colours and textures at the site before making their final selection.

Homeowner extremely pleased with results
The homeowners reported that they were extremely happy with the finished renovation and landscaping. “The design of the driveway and walkway has given us a lot of versatility and space where we really needed it. The contractor did an excellent job of explaining the entire process to us. They were experienced professionals and did a top-notch job in completing the work and cleaning up the site.”

About the author:
Brian Burton is a Certified Instructor for the ICPI Certification Program and is a member of the Standing Committee for Technical Evaluations for the Canadian Construction Materials Commission. For further information on the Interlocking Concrete Pavement Institute or list of ICPI members call the ICPI at 1-202-712- 9036, or write the ICPI at
P.O. Box 23053, 55 Ontario St., Milton, ON L9T 2M0.
The e-mail address is ICPI@bostromdc.com.
The web site is www.icpi.org