Maintaining commercial properties in winter has become an incredibly challenging exercise in recent years. While the main concern of contractors is clearing parking lots and walkways of snow and ice to ensure the safety of patrons, they are also working to ensure, to the extent possible, that their treatment of the site reduces their exposure to slip and fall claims. Insurance premiums have skyrocketed over the past few years, and there are many stories of a single claim increasing premiums enough to put a small company out of business.

Available training, such as that offered through the Smart About Salt Council, teaches contractors about best practices, including how much salt should be applied and in which conditions. However, it can be hard to put this knowledge into practice when you’re faced with real world conditions and pressure from property owners and the public.

Given these concerns, contractors have good reason to be hesitant about making changes to their practices. To explore these issues, the Lake Simcoe Region Conservation Authority (the “Conservation Authority”) conducted a study at a large (14.2 hectare) commercial site to see if the best practices taught in training courses can be effective for both maintaining safety and limiting the amount of salt that’s applied. Two different contractors have been responsible for winter maintenance over the course of the study; the first was there from the start of the study in fall 2014 to spring 2018, and the second has been there since fall 2018. Both contractors focused on maintaining site safety while using different management practices, with the second contractor (2018 to present) utilizing recommended best practices and reducing salt use.

It’s also important to note that neither contractor has had a slip and fall claim or complaint against them throughout the course of the study. The following sections will show that the use of best practices can provide numerous benefits to contractors, not the least of which is maintaining site safety. The failure to implement these practices, however, can potentially result in additional hazards, such as blowing snow, the freezing of melt water in drive areas, loose salt piles which can reduce traction, and reduced visibility; these can all increase a contractor’s exposure to liability.

Of course, there are also environmental costs associated with using more salt to treat a site: high levels of chloride from winter salt have impacts on water resources and aquatic life. Careful thought about how to properly treat a site and close monitoring of on-site weather conditions can help contractors enhance the effectiveness of their practices and reduce or eliminate these issues. 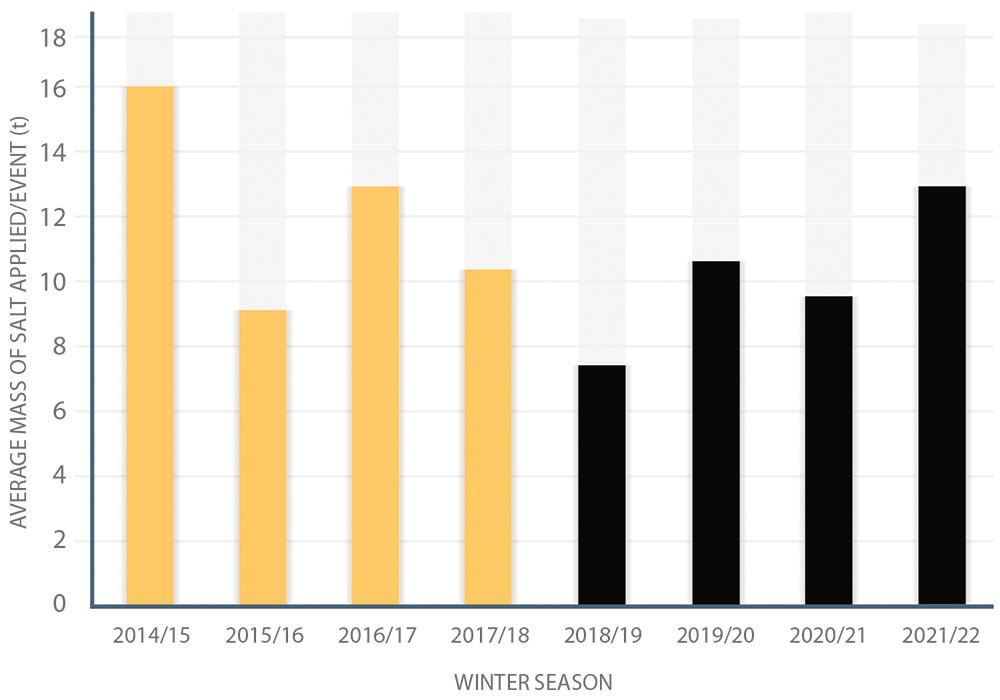 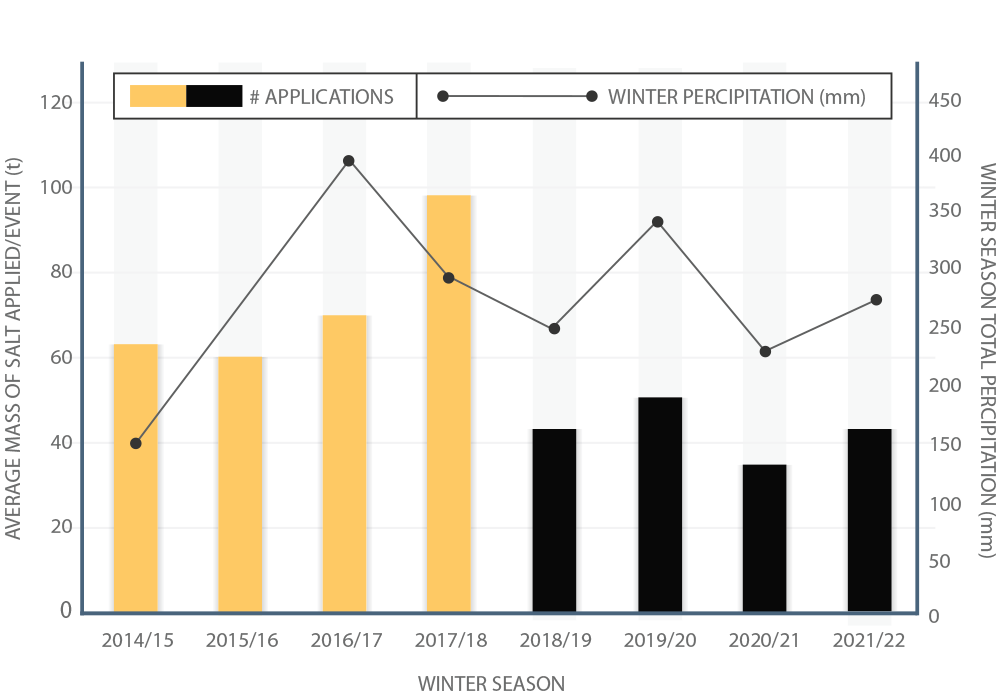 Figure 2: Number of applications undertaken during each winter season (2014-2018 Contractor = yellow, 2018-2022 Contractor = black). Total winter precipitation for each season, from November 15 to April 15 (mm) is shown on the secondary axis.

Salt use on the study site


As noted above, the two contractors took different approaches to maintaining the site. These differences bear out in the data collected by the Conservation Authority over the years of the study. Figure 1 displays the average amount of salt applied in each event over each season (these numbers were calculated by the Conservation Authority through water quality measurements taken at the site’s single drainage outlet), with the first contractor shown in yellow, and the second shown in black. The first contractor applied an average of 12 tonnes (t) per event across all seasons, with an application rate of 81 g/m2, while the second applied an average of 10 t per event at a slightly lower rate of 70 g/m2. The first contractor noted that they used the same application rate regardless of the site conditions and expected weather, while the second tailored their application rates to the actual conditions of the site. This included noting the expected duration of the event and the forecasted amount and type of precipitation, which enabled them to apply less salt in most circumstances.

The most notable difference in how the two contractors treated the site can be seen in the number of events they responded to in each season (Figure 2). The first contractor responded to more events in every season than the second contractor. The first contractor had an average of 68 event responses each season, while the second had significantly fewer, with an average of 42. As shown in Figure 2, seasonal precipitation was not notably lower for the period that the second contractor was managing the site and does not appear to be the reason they were able to respond to fewer events. They were able to undertake fewer applications at a time when municipalities in the area were increasing the number of applications each season. They attribute being able to respond to fewer events to keeping a close eye on the weather and conditions on the ground at the site, as widely available weather forecasts may not be accurate at a smaller scale.


There were some extenuating factors that affected the amount of salt applied and number of applications; the first, and most obvious of these is the weather. For example, 2015/2016 was a mild winter with fewer precipitation events and less precipitation overall. Because of this, the first contractor had slightly fewer applications, and it appears that the drivers elected to apply less salt given the conditions didn’t warrant heavy applications. The other major factor was the salt shortage of the 2017/2018 season. This was a North America-wide shortage that affected road authorities and contractors alike. Due to the shortage, the first contractor couldn’t purchase as much salt as they normally would for the season, forcing them to reduce their application rates, and eventually switch to the use of sand near the end of the season. These factors reduced the amount of salt used by the first contractor. If it weren’t for the mild winter and the salt shortage, the difference between the two contractors would likely have been even more pronounced than what was observed.


This case study highlights the effectiveness of best practices and training programs in ensuring site safety and reducing the amount of salt applied on the site to achieve safe conditions. The potential benefits to the property owner and contractors who follow best practices include cost savings and records demonstrating that reasonable steps were taken to protect patrons from winter hazards. While there were no slip and fall claims for either contractor for the duration of the study, the second contractor was able to manage the parking lot using approximately 45 per cent of the salt used by the first contractor. The difference between the two is due mainly to fewer applications, as well as lower application rates.

There can be considerable financial benefits for contractors who change their practices and apply less salt. In addition to fuel savings from sending plows and salters out less often, less wear and tear on vehicles, and less employee time spent treating the site, further benefits can be seen through cost savings on materials. Table 1 shows that, given the average number of applications and volume applied, the result is an annual savings in materials costs of over $37,000.

As noted by the second contractor, training, an understanding of how to properly use salt in different conditions, and the implementation of best practices is vital when working to improve your methods. This highlights the importance of training for contractors and their staff. Understanding how the materials and the best practices work will help contractors ensure they are applying the right material, in the right amount, at the right time. Training courses are available for contractors in Ontario (such as Smart About Salt), and certification can also be obtained through these programs.

Another important factor in ensuring salt is only applied when necessary is a thorough understanding of the current and forecasted weather conditions, as well as the on-site conditions. This can be achieved in part through subscriptions to detailed weather forecasts. The second contractor noted that they have a staff person check the site on days with weather or expected weather to determine the conditions and what actions may need to be taken; this person also decides whether further treatment is required after the initial treatment. While this may not be practical for all contractors, it is helpful in reducing person-hours and material costs incurred through treating a site unnecessarily. On-site camera technology has evolved to a point that it can be used to perform the same function. In addition, technologies such as pavement temperature and friction sensors mounted to plows, and automated salt delivery systems that control application rates by vehicle ground speed are also important tools that can ensure the right amount of material is being applied when it’s needed.


This study highlights the importance of training, understanding the site conditions, and monitoring the local weather conditions. Implementing these practices results in savings in materials costs, including salt and fuel, as well as human resource and equipment costs. It can also help to prevent the contamination of our water resources. These benefits can be realized with relatively little effort on the part of the contractor, and without sacrificing the safety of parking lot users or increasing exposure to liability. For all these reasons, training and the use of best practices should be encouraged among all snow and ice management contractors.

This case study has received funding and support from the Ontario Ministry of Environment, Conservation and Parks. Such support does not indicate endorsement by the Government of Ontario of the contents of this article.