Editor’s note: The U.K.- based Royal Horticultural Society’s Chelsea Flower Show is renowned as the world’s top horticultural event. At Chelsea 2017, a gold medal was awarded to a garden inspired by the crystal water of Canada’s boreal forest. Its designer, landscape architect Charlotte Harris, tells the garden’s story.

This garden was simply the most perfect opportunity to celebrate the rugged and inspiring landscapes of Canada — and in particular, the iconic Canadian boreal, home to Earth’s largest source of unfrozen freshwater, as well as being the biggest intact forest and freshwater biome on our planet. The garden was sponsored by Royal Bank of Canada, marking the 10th anniversary of its BlueWater Project, and also the 150th anniversary of the Confederation of Canada. RBC’s BlueWater Project highlights the preciousness of freshwater resources; all RBC-sponsored Chelsea gardens, including two by my design partner Hugo Bugg, reflect this commitment.

Of course, it’s just impossible to bring the scale and grandeur of this spectacular wilderness into a show garden measuring a few hundred square meters, so instead it was my aim to create a garden inspired by that place, rather than in any way attempting to replicate it.

I started working on the design in June 2016, and was appointed as part of a competitive shortlist by the Royal Bank of Canada a month later. They were an incredibly supportive sponsor who took a chance on an unknown designer, based on my passion to explore the idea I had. 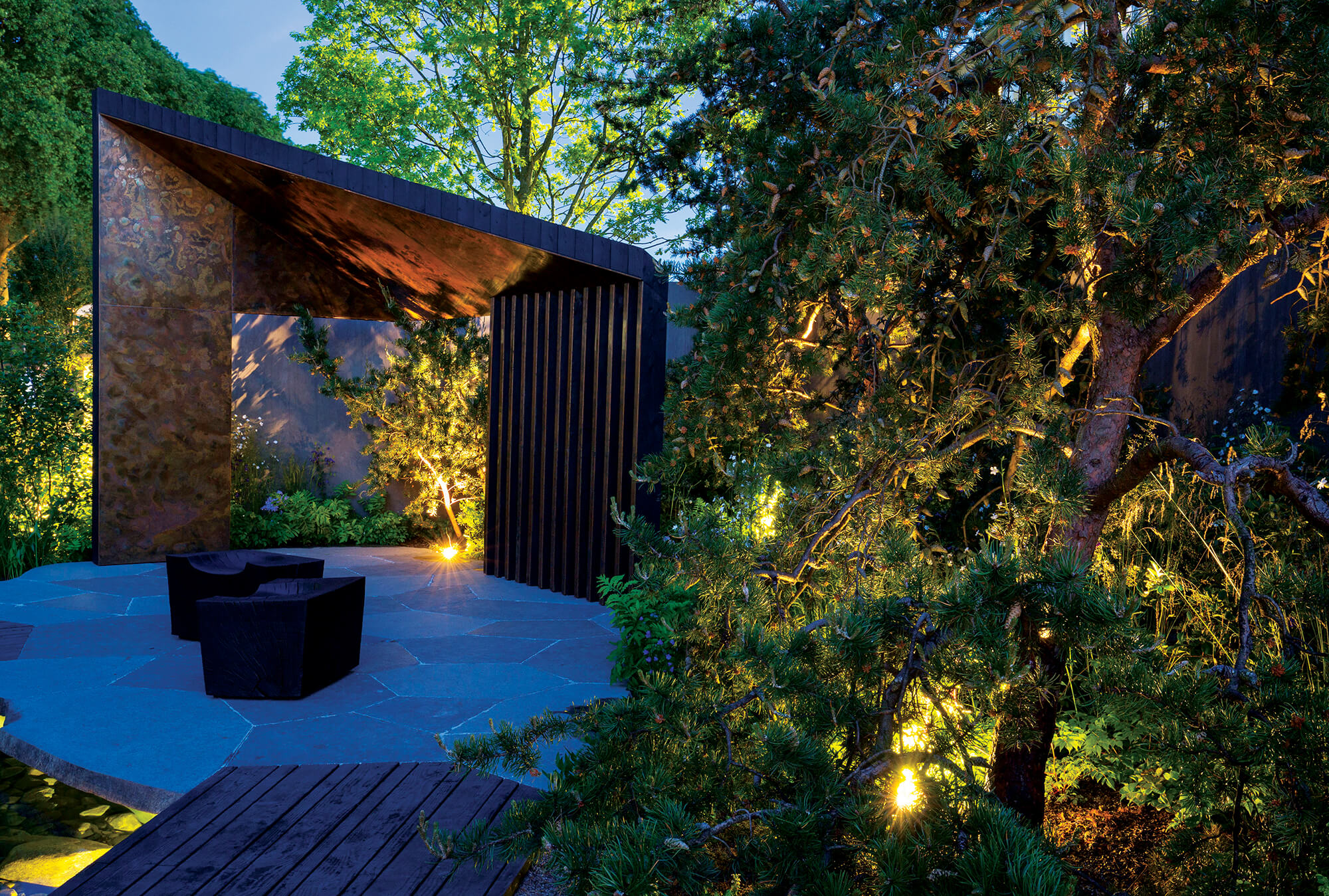 I always knew I wanted the garden to be inspired by the boreal forests and had a strong idea of how it might look. I spent the summer exploring and testing design routes and researching the plants you might find in this area, but it wasn’t until I travelled to northern Ontario in September 2016, and explored the boreal by float plane, on foot and by canoe, that the detail design and plant list really started to take shape. There are no roads or means of transport around that great unspoilt wilderness, other than taking to the water — an experience that will live long in my memory. The unending landscape of deep blues and greens is vast and magnificent, and the flora and fauna was simply breathtaking. As a person from a small island, the scale of the landscape and its endless reaches was mind-blowing, especially when seen from the bird’s eye view of a float plane. I was incredibly fortunate that Thunder Bay Tourism, and two wonderful outfitters, Wilderness North and Voyageur Wilderness Program, felt inspired by the potential of the Chelsea garden and made it possible to journey into the far reaches of the boreal.

It was the gang at Wilderness North that introduced me to an Ojibwe guide, Evelyn Mesengeeshik, who grew up in the area. I had the huge privilege of exploring this remote part of northern Ontario with her, and learning about traditional uses of native plants for food, medicine, ceremony and building materials. The garden included plants Evelyn showed me, although some were pretty hard to track down! But with the help of a brilliant nursery here in the U.K., we managed to include familiar native species such as Ledum groenlandicum (Labrador tea) Anaphalis margaritacea (pearly everlasting), Vaccinium myrtillus (bilberry) and Myrica gale (sweet gale). Of course, we couldn’t find everything in the U.K. or Europe, so about 30 per cent of the planting was substituted with very similar U.K. or European natives. Most admired in the garden, however, were three grand, 40-year-old jack pines (Pinus banksiana). I fell in love with their gnarled and characterful nature when I was up in Ontario. And I wasn’t the only one! One of the most experienced contractors at Chelsea told me that in twenty years of building show gardens, they were the most handsome trees he’s seen. It was the first time jack pines have been used at Chelsea, and they were as much of a hit with the public, too. They overhung the pool of water, which had a naturalistic feel and was pristinely crystal clear.

Around the garden were scattered beautiful, muscular, tactile, granite boulders, in their natural forms — I wanted to evoke my own time of clambering over the Canadian Shield. The terrace used the same granite boulders, but again in a Chelsea first, we sliced up the 11-tonne boulders to form a stylized paved terrace, with the design based on the abstracted cellular structure of the Canadian maple leaf. Upon this sat the garden’s pavilion, made of charred larch (another tree species native to the boreal zone) and copper. Copper was used to represent the mineral-rich geology of the habitat. The pavilion’s 13 louvres represented the 10 provinces and three territories of Canada. It felt very important that all the hard materials had a story that linked back to the vernacular of the boreal. 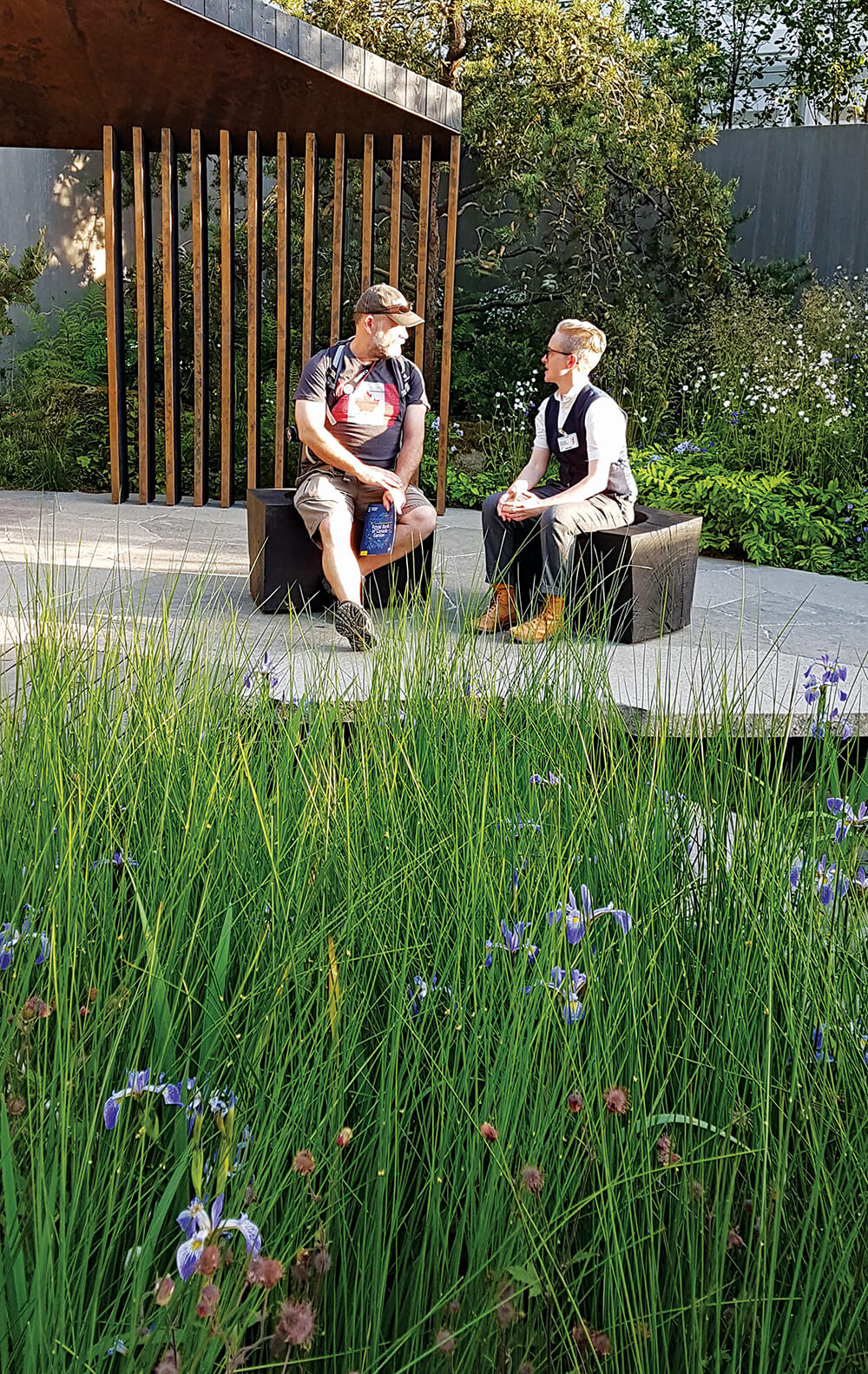 Ontario landscape architect Paul Brydges (left) chats with Charlotte Harris.
When the garden finally came to be judged by the RHS, it was a pretty nerve-wracking moment for every one of us! There’s a huge and incredible team that work on any Chelsea garden: landscape contractors, nursery people, planting teams, water specialists, lighting, and more — and every single one worked their socks off to make the garden come to life. It was a huge testament to their commitment and hard work that the garden got a gold medal. For me, as a first-time designer to Chelsea, it was an enormous honour and also a very moving moment. It was my mother that fired my passion for gardens, and while she is no longer with us, her birthday fell just a couple of days before the medals were announced. It felt like a wonderful tribute to her, albeit bittersweet for her not to be there.

Chelsea and the Royal Bank of Canada Garden has undoubtedly been the high point of my professional career so far. It dominated my life for all of 2017 in a way I have never experienced — tremendous highs and lows, full of trepidation and anxiety about having a garden at the greatest horticultural show on earth. But the opportunity to explore the beauty of the Canadian boreal wilderness and then take its flavour to Chelsea for my first show garden, was a huge privilege and one I will never forget. The icing on the cake, of course, was the gold medal.

The garden has since found a permanent home at a large and very beautiful wetland reserve in Lancashire, Wildfowl and Wetland Trust, at Martin Mere, in the “Forest Wetlands of the World” education section. Obviously I am absolutely delighted, as it means it is a truly sustainable garden with a learning legacy.