Urban Meadows offers a unique service in the landscape industry. His agricultural background allowed B.J. Jordan to provide farm services, which includes everything from haying to manure handling.

Share
Tweet
Mail
Anyone who has farmed knows that the difference between success and failure is a matter of timing.

It must have been a lesson learned by William ‘B.J.’ Jordan, proprietor of Urban Meadows in Ayr, while growing up on his family’s farm. At the age of 12, he traded a welder for a commercial-type lawn mower, which he then used to begin his lawn cutting business.

“It snowballed from there,” says Jordan. Even while attending college and studying to become a diesel mechanic, Jordan still kept his grass cutting business going, now named B.J.’s Lawn Service. His motto was, “You grow it...I’ll mow it.”

After college, he began to work in the trade for which he had received his formal training. “After ups and downs working for someone else, I decided to jump in full-time to operate B.J.’s Lawn Service.” The following year, 2007, he added snow removal operations. It was also when he met his fiancé, Nichole Ashton.

They now work full-time to grow Urban Meadows. The first year the pair had 30 properties, and then landed their first big client, Maple Leaf Foods.

At this point, Jordan’s sense of timing again came into play, when he learned about the Smart About Salt program. “When I began to understand what the program was all about, I realized I was seeing the future when it came to how salt would be used on our roads,” says Jordan. “I became pro-active, copying the program’s log-in and report printing formula.”

This was in 2007, just before Landscape Ontario joined with the Regional Municipality of Waterloo to administer the Smart About Salt program. “I was aware of Landscape Ontario, but always thought we were too small a company to join the association,” says Jordan.

After realizing his company was eligible, Urban Meadows joined LO in May of 2012. “Becoming a member of Landscape Ontario was one of the best moves we made as a company,” says Jordan.

He and Ashton did more than just become members. In a short time, B.J. Jordan was named chair of the snow and ice sector group. It’s a group that has some major projects on the go and its membership is made-up of some long-time and influential members. 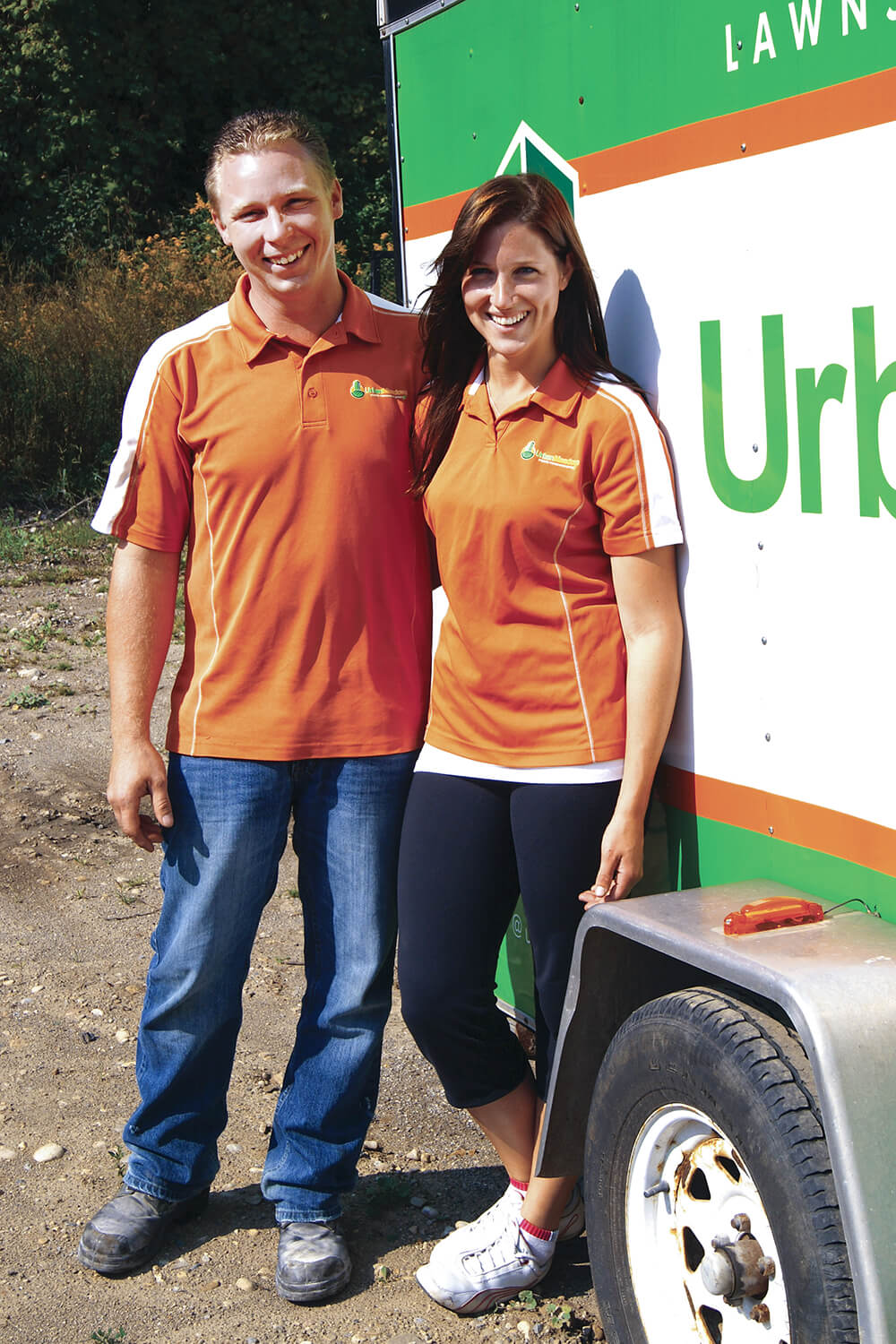 B.J. Jordan and his fiancée Nichole Ashton are new members to Landscape Ontario, but already they are heavily involved in association work. “At the meeting, members of the group said they needed a new chairperson, and they wanted someone under 50. I guess I fit the mold,” he says with a grin. Jordan is 29 years of age.

It isn’t the first time he has stepped into a position of leadership. He has served as chair of his community’s events group and ran for election in the previous municipal race. Although he didn’t win, Jordan says he learned a lot from it, and plans to try again. “Maybe for mayor next time,” he says.

He reflects on being part of the snow and ice sector group as another opportunity to learn. I have learned a lot from the people who sit on the committee,” says Jordan. “They are so willing to share information.”

This winter he will take part for the second year in the University of Waterloo study on salt use on urban parking lots. The research is supported by the LO Snow and Ice Sector Group.

“We hope to reduce not only the salt usage by our company, but the industry’s usage as a whole,” says Jordan. Each Urban Meadows salter is equipped with a system to monitor salt applications. The company uses a GPS system to track weather and vehicles. The system allows Ashton and Jordan to maintain strong records in an industry plagued by slip and fall lawsuits. The couple feels that maintaining strong and accurate records will defend against liability claims.

Urban Meadows provides traditional ground maintenance, landscape management, and snow and ice control. It also offers a unique service to area farmers. Jordan’s background helped to offer farm services by Urban Meadows, as many know him from that part of his life. “My employees love the opportunity to get out in the fields over the summer. They really enjoy the change.”

Urban Meadows advertises, “Don’t worry if your machine goes down, someone is sick or if the weather just won’t co-operate with your harvest. Let us help you out!”

This is the first year the company has offered the farm services. “It’s not a huge part of the business, but I expect it will grow over the coming years,” says Jordan.

Using his mechanic training and experience, Jordan provides customized fabrications and machinery repair. “It pretty much varies on what comes into the shop,” says Jordan.

Urban Meadows has five full-time employees and part-timers as needed. “We started to hand-pick clients last year, getting rid of those that were costing money. It’s been amazing how much our expenses have decreased since we did that.”

While both Nichole Ashton and William Jordan work hard to grow Urban Meadows, they are awaiting for the right time to set a date for their wedding. After all, timing is so important.
Share
Tweet
Mail