The annual trial gardens open house drew both industry and consumers to view what will be on the shelves next year.

Trial gardens show off best of the new plants

Share
Tweet
Mail
Thousands of people driving the 401 west, near Milton, have seen from afar the beauty of the trial gardens on the grounds of Landscape Ontario. For two days in August, both members of the horticultural industry and the public had a chance to see those gardens up close.

Displaying the newest in plant material, the Aug. 20 open house welcomed approximately 80 members of the horticultural industry who took advantage of the opportunity to view the gardens containing some of the latest plants. A co-operative effort among LO, the University of Guelph and the Ontario Parks Association, the open house on Friday saw visitors at the LO home office in Milton, while the afternoon featured the gardens at the University of Guelph.

The following day, members of the public were invited to tour the LO gardens. The event was also part of the Milton Community in Bloom Garden Tour. Over 130 people came out to see the trial gardens on Saturday.

Following opening remarks by LO’s executive director Tony DiGiovanni and trial garden manager Rodger Tschanz of the University of Guelph, attendees were treated to thought-provoking talks from Keith Osborne of Gro-Bark and Jack Legg from Agri-Food Laboratories on the subjects of soil amendments and soil nutrition.

Tours of the trial gardens followed the speaker program. The LO gardens are split into a number of areas. Calibrachoas, Rieger begonias, New Guinea impatiens, lobelia and coleus were planted adjacent to the LO building. New hostas and other shade-loving perennials and annuals were planted in the boulevard garden at the entrance of the association’s home office property.

The main trial site, in the big garden between the LO building and the 401, contains examples of perennials planted in 2008, 2009 and 2010, as well as annuals that should be on the shelves of garden centres next year. An area in this garden also has some unusual vegetables. 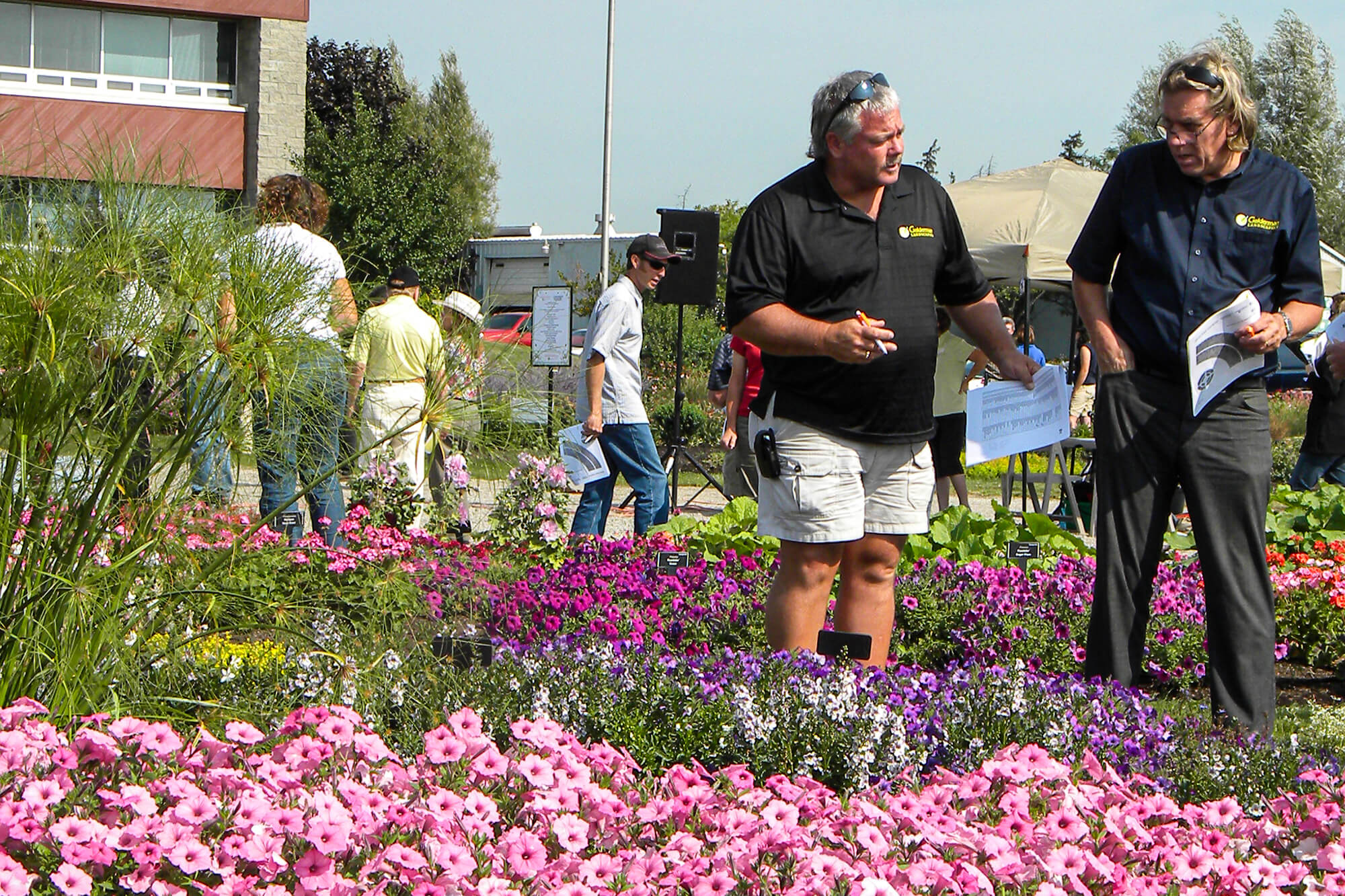 The trial sparks trade and public interest at the open house events. One of the plants that continues to attract attention in the perennial beds, is Rudbeckia maxima — a six-foot tall rudbeckia. In another section of the main trial beds is a large area planted with bedding plants from the Vineland pack trial. These plants were grown and evaluated as greenhouse bedding plants at the Vineland Research and Innovation Centre. Once the greenhouse evaluation was finished, they were planted in the garden and containers at Milton, Guelph and Vineland. A selection of these same plants can also be found on display in a trial area at the Royal Botanical Gardens.

Proven Winners and Goldsmith Seeds both had display beds at this year’s LO trial. The PW bed highlighted the company’s old standbys, alongside new introductions such as Mercardonia Gold Dust. In contrast, the Goldsmith bed was planted with only nine cultivars, showing their effectiveness in mass planting.

Vegetables for small urban gardens was the theme once again of the trial’s vegetable area. Red Velvet okra showed its potential as both an ornamental and food source. The winter squash, Marina di Chioggia, although not a compact-growing plant, produced mounds of bloom and some very unique looking knobby fruits.

Visitors on both days had the opportunity to vote for their favourite plant. On Friday, the top choice among professionals was the Raspberry Blast petunia. It received seven votes, with the next closest, Sunrise Rose lantana, receiving five votes. The public didn’t agree, voting for Angelonia Angelmist Purple Stripe as the top plant, while Cleome Sparkler was a close second and the unusual coloured Petunia Pretty Much Picasso and Rudbeckia maxima tied for third.

Special appreciation goes to Keith Osborne of Gro-Bark for his support of this year’s trial garden. He also secured sponsorships for the industry event, gave a talk on soil nutrition and manned the information booth at the public open house.