The LO trial garden program has always been in a constant state of evolution. Over the years, trials of annual flowers have expanded to include perennials and most recently hardy roses.

Visitors to LO this fall will notice that the rose area has undergone a massive renovation.  All the roses planted in 2012 have been removed in preparation for planting a new rose selection in 2016. The planting of newly released rose cultivars will be organized in a way to make identification easier for both visitors and researchers.

The trial garden planning committee is currently investigating the possibility of adding a shrub trial to the trial gardens. If there is a particular plant species or genus of shrub you would like to see trialed, please contact me with your ideas.

As I write this article about the past trial season, we are already making plans for 2016. I would like to formally welcome David Turnbull to the trial garden team. Along with his duties with Canada Blooms and outdoor property management at the Landscape Ontario Milton home office, David will assist with the maintenance of the LO trial grounds. He inherited this position from Robert Ellidge who will now have more time to focus his energies on his many other responsibilities at LO. I would like to take this opportunity to thank Robert for all of his support of the LO trial site since its inception in 2007.

Most of the annuals and perennials in the Landscape Ontario trial have also been planted at the University of Guelph’s trial garden at the Guelph Turfgrass Institute (containers and ground beds), at the Vineland Research and Innovation  Centre (containers) and at the Royal Botanical Gardens (RBG ground beds in Hendrie Park).

The winners and favourites in from the 2015 trial season that will be described in the following section have all appeared at the LO trial site, but descriptions will include performance ratings at all relevant trial sites. 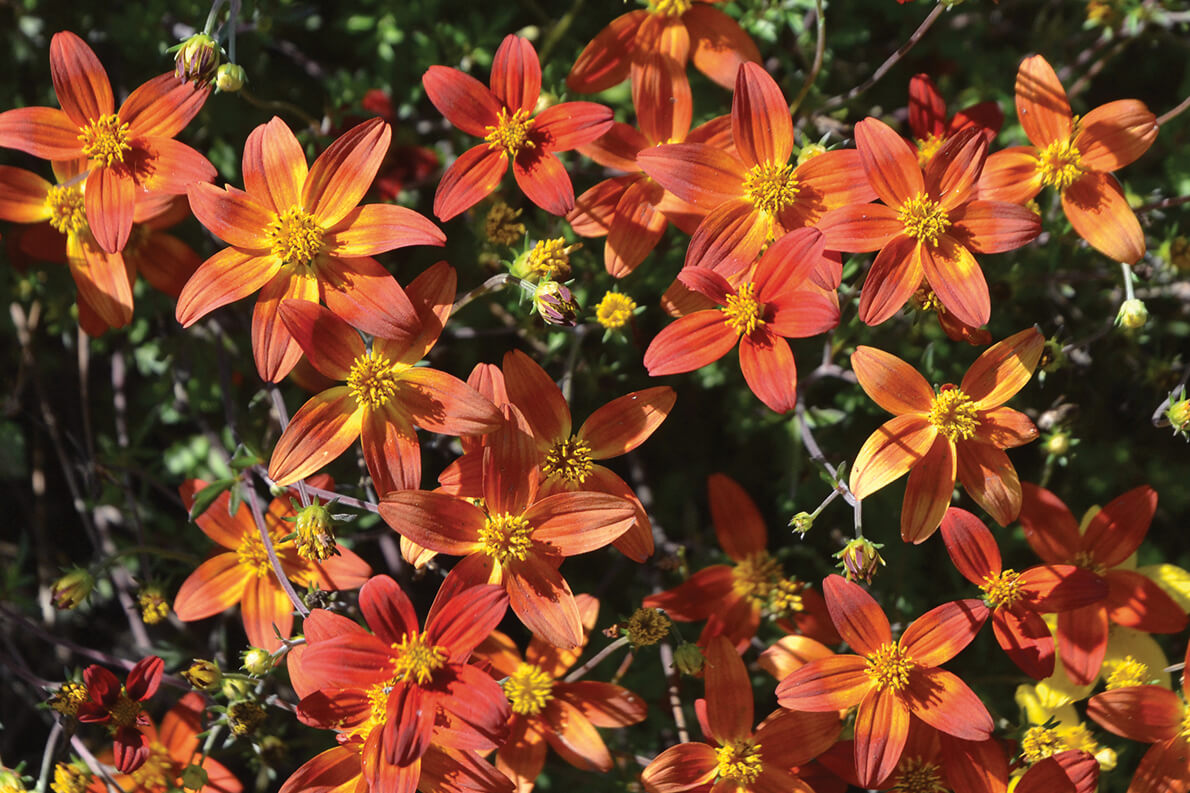 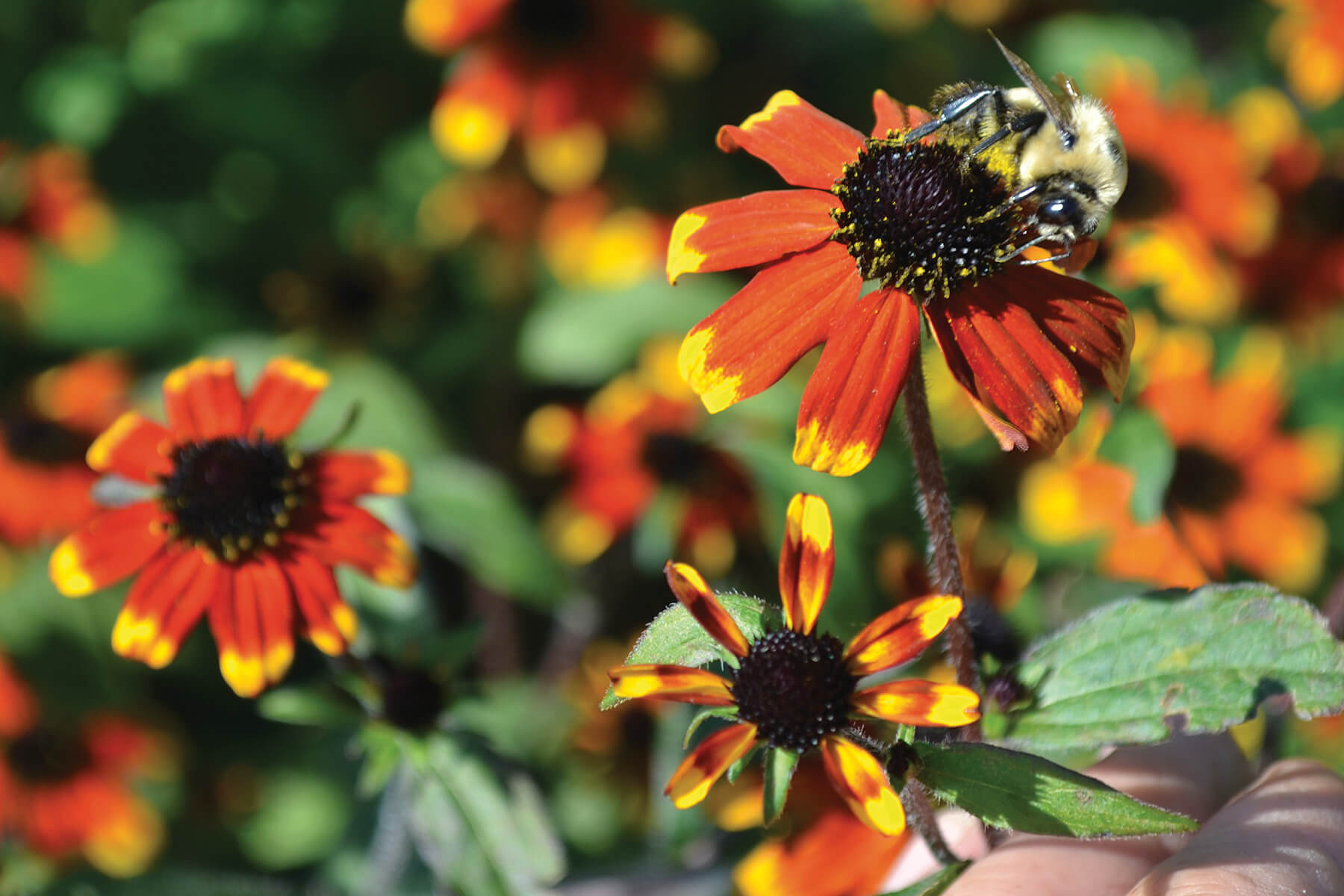 The Garvinea Sweet series of gerbera has now appeared in the trial program at all of the University of Guelph trial sites for two years. This series has specifically been selected by Florist Holland for its outdoor performance qualities.

Our trial experience supports the company’s claims of excellent outdoor bloom production and disease tolerance. This gerbera will give long season bloom in both flowerbeds and containers, as long as the plant is not allowed to sit in waterlogged soil conditions.

The Garvinea Sweet plants at LO Milton suffered because of waterlogged conditions, but performed without fail in containers in Guelph and Vineland and in the well-drained ground beds in Guelph and at the RBG.

This gerbera can be described as having medium size flower heads on 30-45 cm long stems. An added benefit of this gerbera selection is its ability to handle mild frosts, making it tolerant of early planting in the spring and season extending in the fall. In recognition of its excellent garden qualities, the Garvinea Sweet series has been named the 2016 Canada Blooms plant of the year.

Picking the best from the selection of 69 petunias in the 2015 trial is at first glance a difficult chore. However, after a long growing season with varying temperatures, rainfall, disease pressure and early frost, the differences become much more pronounced. The tried and true and vigorous Supertunia Vista Bubblegum continues to perform well from late spring to early fall. With a similar growth habit to Vista Bubblegum, the newly released, 2015 AAS winner, Tidal Wave Red Velour petunia provides dark red flower option, good disease tolerance and a long bloom period.

The tall upright annual Verbena bonariensis is most commonly propagated from seed and is used in plantings such as artificial meadows or where its airy form and lavender-coloured flowers are desired. Meteor Shower is a shorter, vegetatively propagated selection of Verbena bonariensis, making it container friendly and providing a more dense arrangement of flowers. This selection performed well in all trial sites and was a favourite of visitors to the trials. In the Milton trial, a seed-propagated selection Verbena bonariensis (Buenos Aires) was at least 30 cm taller than Meteor Shower, which had an average height of 60 cm.

There were five different cultivars of celosia in the main trial this year.  Of the five, Intenz Lipstick proved a favourite of visitors to the garden.  Dark, bronze-red foliage with brilliant floral plumes made it an eye catcher. Another favourite was the celosia Dragon’s Breath. It was slow to bloom at all trial sites in Ontario, but its red foliage made it attractive. The inflorescence started to form in August on large plants that had been growing vegetatively for most of the season. The result was a large, showy plant covered in bloom in the late summer. The colour and form make this celosia well suited for fall decorating schemes. Dark Purple and Classic are the two other colours currently available in the Intenz celosia series.

Flowers that seem to unfailingly attract hummingbirds are also always attractive to the public. This is the case for the Salvia Black and Bloom, a new tall upright growing blue flowered salvia that has dark, blackish stems and calyx. Hummingbirds were regularly observed visiting this flower at the three trial sites. Black and Bloom has larger flowers and darker stems than the previously released Black and Blue cultivar. 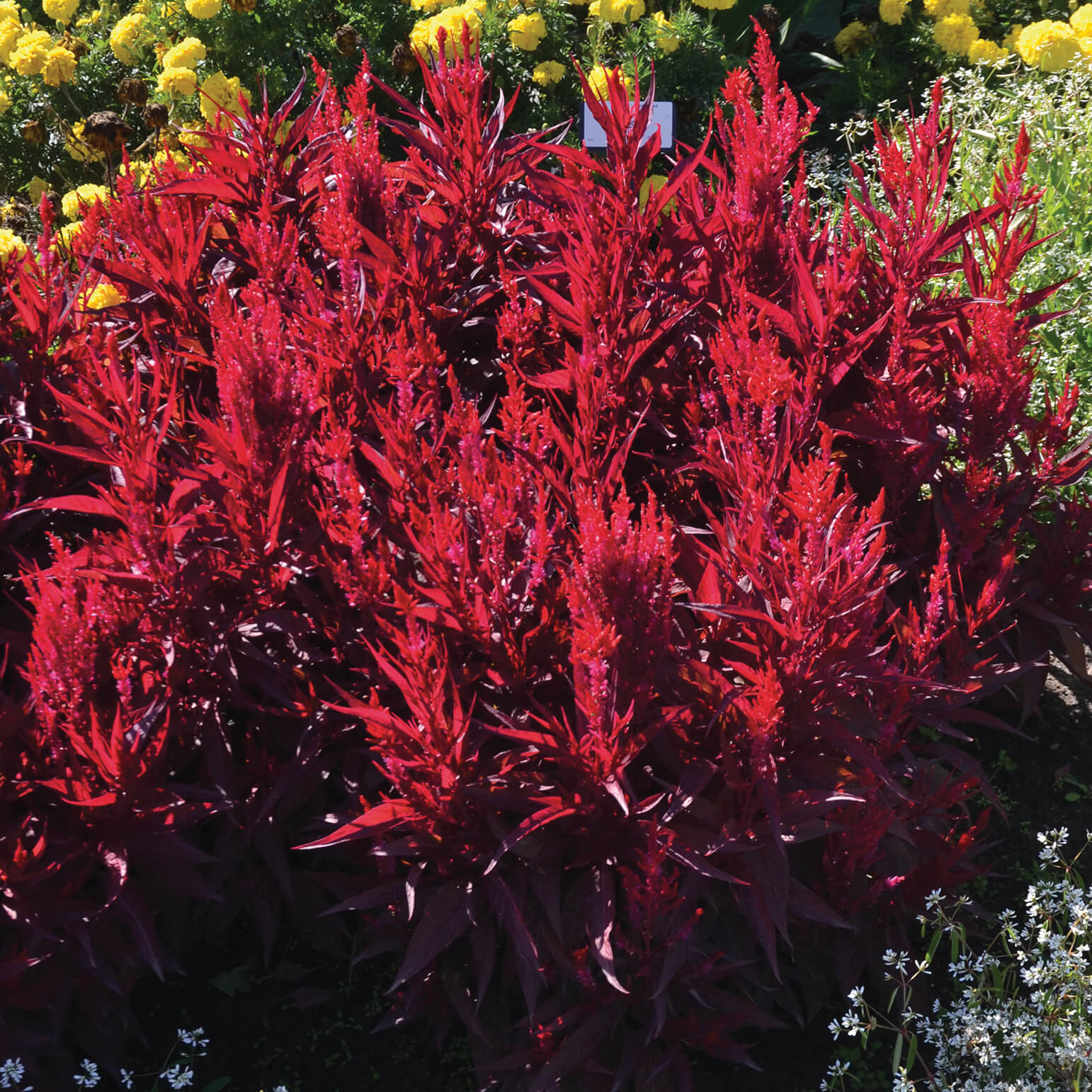 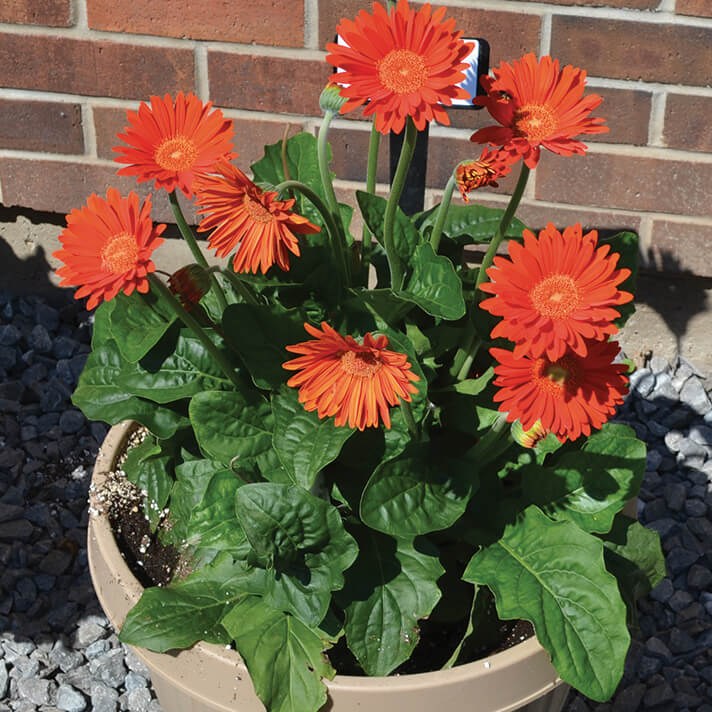 Gerbera Garvina Sweets
We are used to seeing different cultivars of Bidens Campfire Fireburst (tickseed) in the marketplace with varying degrees of compactness or flower size, but all have yellow flowers. This year, for the first time, an orange flower form was entered in the trials. Campfire is the cultivar name and it was compared against the yellow flower form Namid Early Yellow.  Both grew to heights of 40 cm in the garden and spread to one metre width by the end of the growing season; each had a maximum flower diameter of four cm. Campfire bloomed well all season and had no noticeable disease issues at any of the trial sites.

The Summer Romance Double Pink mandevilla has a vigorous vining growth habit and a very attractive, light pink, double bloom. This plant does best under full sun conditions and with climbing supports.

The Summer Romance series may also be found marketed as the Calypso series.

Solanum melongena is commonly called eggplant; the eggplant cultivar we trialed was the 2014 AAS vegetable winner Patio Baby. It has a compact growth habit, produces palm-sized fruit and has a very attractive growth habit and colouration. This is another plant for both garden beds and containers and can fulfill the dual role of ornamental and food crop plant.

We also had the Cucumis bush-type cucumber Pick a Bushel in the trials this past year. Although not very ornamental, this small plant produced large quantities of tasty, short cucumbers without needing much garden space. This AAS vegetable winner is suitable for container growing as well.

Last year we had the Begonia bolivinesis Santa Cruz (fiery orange colour) in the trial and this year it was San Francisco (salmon coloured) has been released as another option for the gardener.  San Francisco has excellent performance in both ground beds and containers and is tolerant of both sun and shade.

A new colour of SunPatiens was released with variegated foliage, orange blooms and the vigorous growth associated with this series. SunPatiens Spreading Tropical Orange is one of the favourites from the open houses this past summer. 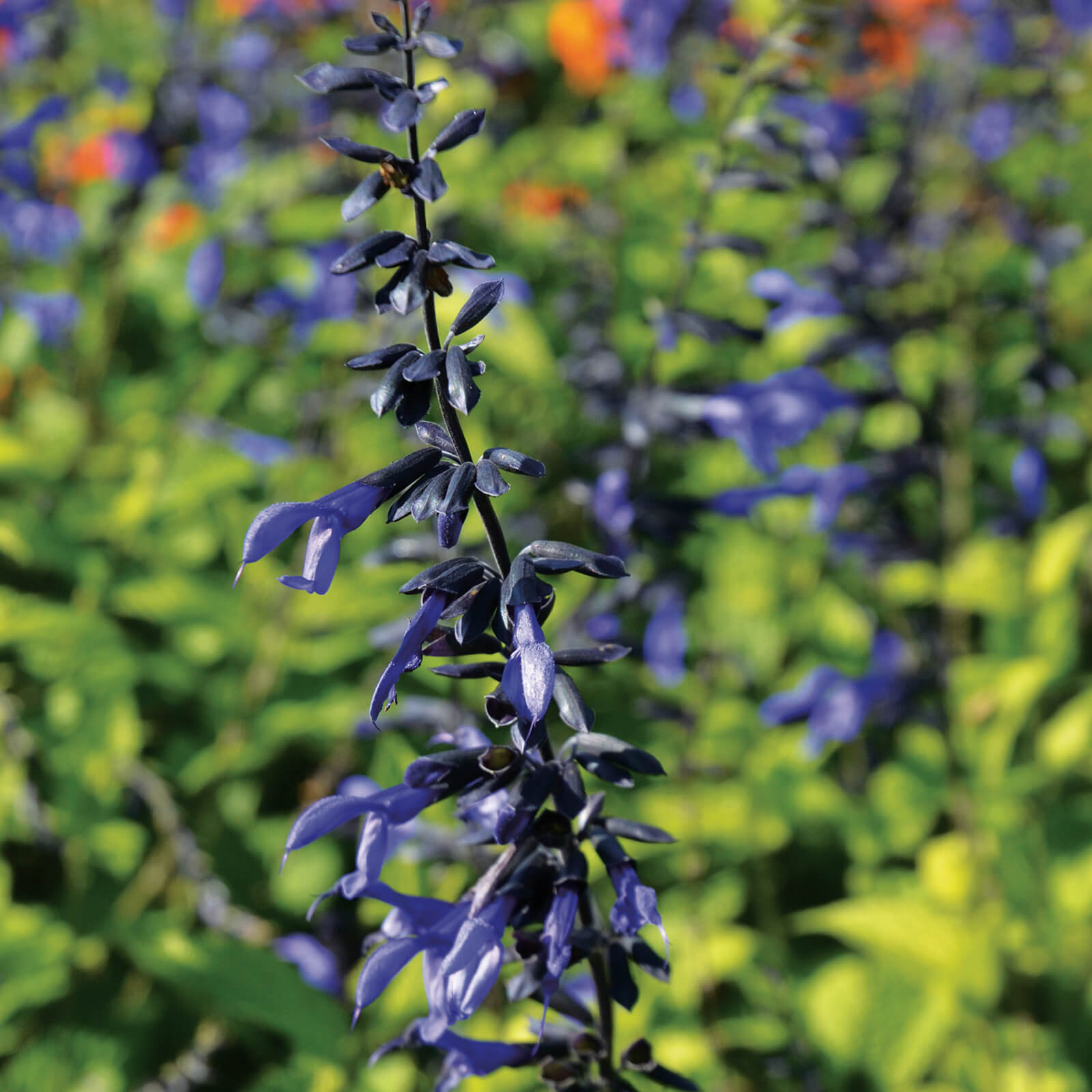 Prairie Glow is a selection of Rudbeckia triloba that was planted in the trials in 2014 and only started to bloom during the 2015 growing season. The wait was worth it. The late season bloom is characterized by scores of small dark brown-eyed daisy flowers with yellow tipped burnt orange ray florets. This plant provided a burst of colour in the garden when other perennials such as Echinacea and Rudbeckia Goldsturm were finishing.

The following companies helped to make the Trial Gardens a success in 2015: