When Bob Osborne started a cabinetmaking business in Markhamville, N.B., in 1970, he had no idea his future would include Corn Hill Nursery. Neither did his dad, the late Robert Osborne, who purchased the acreage as a retirement farm in 1974. But somewhere along the line Bob Osborne developed a passion for apple trees (some might call it an obsession), and once he discovered grafting, – “magic” is what Osborne calls it – his life took a hairpin turn.

Corn Hill Nursery was born in 1980 on a corner of his dad’s land. Osborne gave up the cabinetmaking business and moved his family to the farm. At first it was just him and his passion. He learned everything he could from books, government departments, other growers, and by trial and error.

Corn Hill specializes in disease-resistant apples and historical varieties that are often hard to find. Osborne started by searching for a hardy rootstock that would feel at home in the Atlantic climate. He chose Russian seedlings including ‘Beautiful Arcade’ and ‘Antonovka.’ Then he went on to study varieties he could graft to the rootstock that would do well in the region’s short seasons and cold winters. As a result, Osborne has a private orchard of more than 100 apple varieties, but chooses only 30 to 40 of the best species to sell to his customers.

Distractions turn into collections
Osborne admits he bores easily, and soon his attention and passion included roses. But Bob being Bob, he couldn’t just import them to sell; he had to study and learn how to propagate his roses on their own rootstock, something very few nurseries did. During the early 1980s, Osborne began by collecting hardy rose varieties and testing them to obtain the best results. He published his findings in various publications and then went on to write his first book, Roses for Canadian Gardens, published by Key Porter Books in 1991. “Writing the book helped give us credibility,” says Osborne.

Today Corn Hill Nursery is known for its hardy roses, as well as those difficult-to-find. Corn Hill roses will survive temperatures of -30°C or colder. Although this limits the number of varieties the nursery carries, there are still dozens to choose from: “a vast array of colours, textures, forms and fruits,” according to its website.

The next plant to appeal to Osborne’s passion was grapes. He knew that people were trying to grow traditional Ontario varieties without much success, so he researched hardier varieties that were less well known and planted his own vineyard. He found several that will survive temperatures of -35°C or lower, with little or no winter injury, and ripen within the region’s short growing season. This year, the nursery lists 16 varieties in its catalogue.

Stick-to-it attitude results in success
But there were setbacks too. “I’m stubborn,” says Osborne. “Otherwise, I probably wouldn’t still be in business.” When a fire destroyed the old dairy barn in 1984, where the nursery had been located, he moved the business to the other side of the road and built a new structure with the help of friends and neighbours. “About a hundred people came out and we did the barn raising in one day.” When his first crop of rooted cuttings dried up and died, Osborne studied irrigation and installed it throughout the nursery.  “We’ve lasted longer than any other grower of perennials in the Maritimes,” says Osborne.

Today Corn Hill Nursery grows and stocks hundreds of varieties of trees, shrubs, small fruits, vines and perennials, 98 per cent of which are propagated on-site and hardy for the Atlantic region.  It grows the largest selection of plants in the Maritimes. Yet Corn Hill Nursery is as far from being a big store as you can get.

First of all, it is literally in the middle of nowhere (apologies to the inhabitants of Corn Hill).  You need a map to find it and there is no drive-by traffic. Walk-in traffic is unheard of. When “location, location, location” are the first three rules of commerce, how does Corn Hill survive?

Best advertising is a happy customer
“Word of mouth,” says Osborne. “We don’t do a great deal of advertising; we do have the website and the mail order catalogue.”  But, he says, it is customers bringing their friends, spreading the word about the nursery’s knowledgeable staff, and the service and quality of product that makes them well-known.

The Corn Hill Nursery website, www.cornhillnursery.com, is full of gardening information and eye candy. You can see each rose, apple, daylily or grape, plus learn how to grow it successfully. It is updated at least weekly, showing what is blooming and fruiting. Not only that, there is a phone number where real people will talk to you and help solve your gardening problems. You can also find them on Facebook under “Corn Hill Nursery Cedar Cafe.”

Sixty per cent of the nursery’s business is wholesale, although the style of that has changed over the years. In the beginning customers were small, independent retailers and Osborne would jump in his truck and drive around the Maritime provinces selling his trees and plants. Then when the big box stores arrived, Osborne sold to them, until the profit margin eventually became “infinitesimal,” he says. Now he supplies landscape contractors and runs his own operation. Corn Hill’s, small, award-winning landscaping business has done public, commercial, and private work throughout southern New Brunswick. 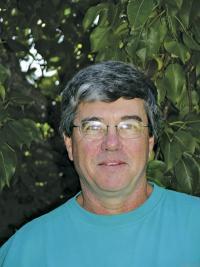 Bob Osborne
Cafe creates destination store
The retail end of the business took a jump when it opened Cedar Cafe in 2000. Osborne had noted that European nurseries existed independently by being an attraction, a destination in themselves. So Osborne designed the two-storey, barn-styled cafe. The first floor houses the open kitchen, bar, and luncheon area. Upstairs, through the waterfall of ferns, rhododendrons, and orchids is another eating area, including a vine-laden balcony and display of tools used by farming families in the early 1900s. The menu offers a variety of delicious homemade appetizers, soups, salads, yogurt, hot and cold sandwiches, vegetarian choices and fresh desserts, plus a complete beer and wine list.

“It’s the comfort factor,” says Osborne. “People stop for a coffee, take a look at the catalogue, stroll around the gardens, stay for lunch, then choose their purchases.”  The cafe space also provides the opportunity for celebrations and weddings, surrounded by the beauty of the gardens.

Regular events drawn big crowds
Events are another lure for Corn Hill Nursery. Seminars are offered twice a month from April to September, covering topics such as grafting and pruning, building with stone, and care for roses. Monthly themes bring thousands of visitors to the nursery. June features Rose Weeks where Osborne picks a sample of every rose in bloom each day and displays them on the stone table under the pergola. Daylilies take centre stage in July, and in August more than two dozen craftspeople – makers of jewellery, pottery, and woodworking – set up in the garden. September brings Grapefest, with workshops on grape growing, wine and cider making, horse-drawn wagon rides, and more.

Bob Osborne is Corn Hill Nursery. His goal was to create a nursery within a garden. “I wanted it to be so you couldn’t see where the planting stops and the sale begins,” he says, “and there is very little signage.”

And so it is. When you arrive it seems there is a very little retail space, but plenty of flowers and trees and beauty. Inside the cafe and outside in the seating areas are flower arrangements made from whatever is blooming that the day. Osborne gets up at 6 a.m. and works on the arrangements until 9 a.m. when the nursery opens. “I tell people I’ve worked for 30 years so I could be a flower arranger,” he says with a smile. “I want to bring people joy through plants. I want them to experience a way to relax.”  Using this as his measure, Bob Osborne’s Corn Hill Nursery is truly a success story. Carol Matthews is a Nova Scotia-based travel and garden writer.<
Share
Tweet
Mail