Adult leafhopper on Caragana: note the large head and how the body narrows at the hind quarters.

Potato leafhopper is a significant pest

The year 2009 was unprecedented for injury from potato leafhopper in Ontario nursery crops. It seemed like the stars were in perfect alignment when the first group of adult potato leafhoppers migrated in from the south: leaf emergence was late and prolonged with the cool, wet spring weather. As a result, leafhopper populations took off and several woody ornamental crops sustained moderate to high levels of feeding injury. There are other species of leafhoppers that feed on nursery crops, but potato leafhopper seems to be one of the most common. The following article is aimed at helping you monitor and diagnose leafhopper injury and improve the success rate of your management program. I acknowledge my summer student, Matt Barnett, for doing much of the literature review for this article.

An adult potato leafhopper (Empoasca fabae) is a small, lime-green insect that is only three to four mm in length. They are wedge-shaped, broadest at the head and tapering back to the tips of their wings. Adults are characteristically marked by six white dots located directly behind their heads (visible under magnification with a hand lens). Adult potato leafhoppers are highly mobile when disturbed, often jumping or flying to and from new plants or moving along leaves in a very distinct, rapid sideways running movement. Adults can spring away so quickly, it almost looks like they are being flicked off of the plant.

The nymphs of the potato leafhopper are similar in appearance to the adults, except smaller, pale green in colour and wingless. Though unable to fly, the nymphs still demonstrate the characteristic sideways running movement when disturbed. The nymphs undergo five instars (growth phases) over a period of two to three weeks during development, before maturing into winged adults. Tiny, white skins cast from the nymphs are often found clinging to lower leaf surfaces.

Just like other sucking insect pests, potato leafhoppers prefer to feed on soft, newly-emerging leaves but they will also feed on older leaves. Leafhoppers are commonly found feeding from the leaf undersides. Plant injury symptoms caused by potato leafhopper may take several days to become evident after feeding has occurred. As the potato leafhopper probes and feeds on host tissues with its stylet (feeding tube), it disrupts and lacerates host cells under the epidermis.

In addition, the potato leafhopper secretes a toxin as it feeds. The toxin and the debris disrupt the tissues and clog the vascular system of the leaf. Not surprisingly, early injury is often characterised by leaf wilt and an off-colour appearance that leads to stunting, leaf curling and chlorosis (yellowing) near the margin of the leaf. Marginal chlorosis becomes marginal necrosis (tissue death) and this type of injury is known as hopper burn. 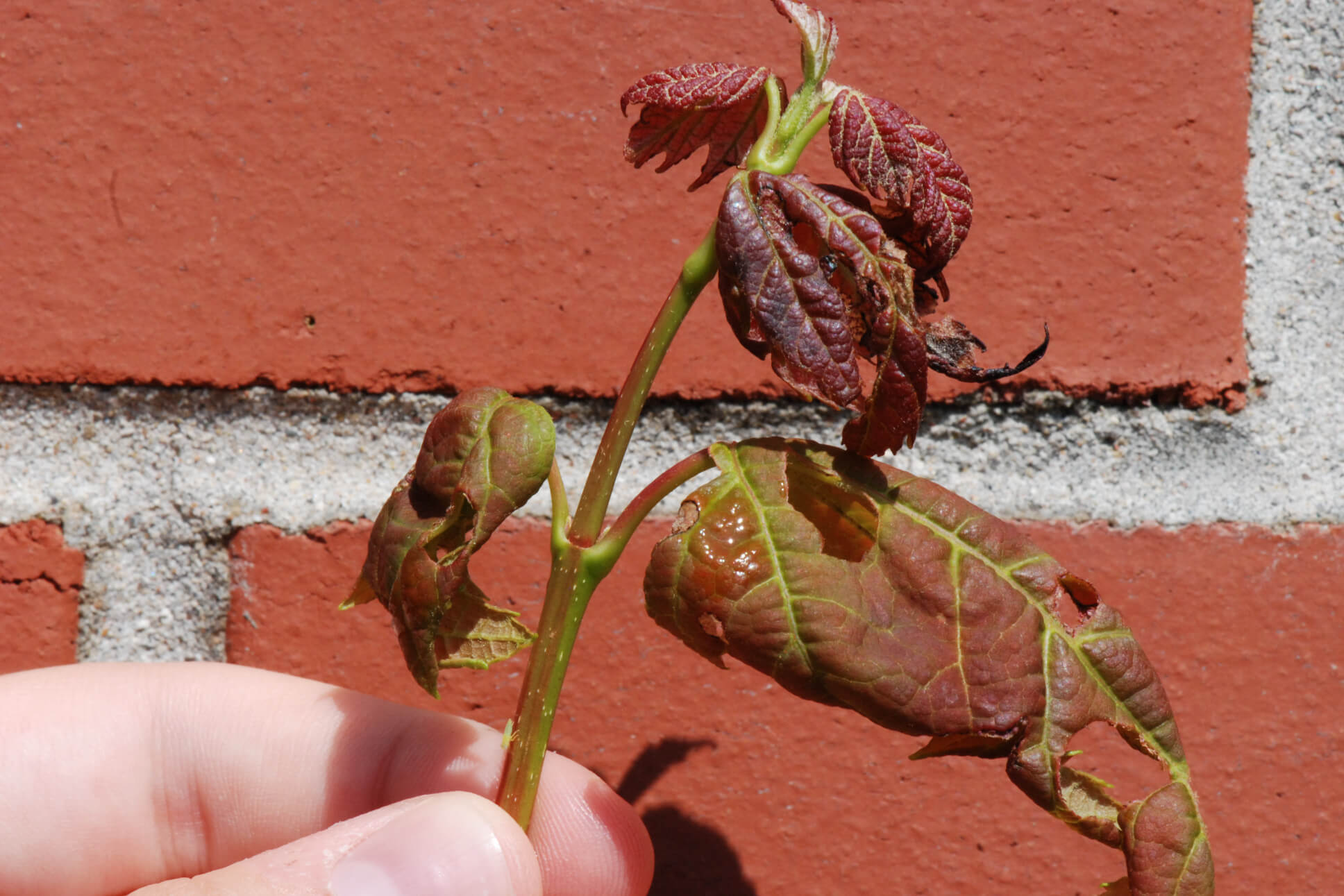 Early potato leafhopper injury is characterized by leaf wilt and an off-colour (see lower leaves) that leads to stunting, leaf curling and chlorosis (yellowing) near the leaf margin (Acer).

At first glance, hopper burn looks like a phytotoxic response to a chemical application or extreme hot/dry weather and it is often misdiagnosed as such. If you are not out monitoring on a regular basis, you may not see leafhopper injury until weeks after it has occurred. By that time, the leafhoppers may have dispersed to other actively growing crops. It’s easy to see how feeding injury from potato leafhopper is often mistaken for something else or becomes an unsolved mystery.

Hopper burn and leaf wilt are more common on younger, newly-emerged leaves of woody plants that are colonized by potato leafhoppers. When older, fully-formed leaves are fed upon, symptoms appear as tiny, chlorotic dots on the upper surface of leaves. This injury is often described as bronzing or flecking and is noticeable by early mid-summer.

Several studies have shown that potato leaf hopper feeding on Norway and sugar maple causes severe stunting (reduced leaf area and very short internodes on the twig) and the loss of apical dominance on the shoot (Carlson, 1980 and Morette, 1959).  Without the strong influence of that apical bud, several of the lateral buds will break, causing an abundance of shoots to form at the tips of branches. As we know, this leads to poor growth habit and form and must be corrected inside the nursery by pruning and training. This can significantly increase to the cost of production for susceptible nursery crops and put growers at an unfair advantage.

The vascular damage caused by potato leafhopper may decrease the overwintering survival of the affected shoots. Dead tips in spring mean the loss of apical dominance and again, may lead to an increased number of lateral shoots at branch tips and the need for some additional corrective pruning. There is also some evidence that high rates of nitrogen fertilization may increase nymph survival rates and subsequent egg-laying on nursery crops (Bentz and Townsend, 2001, Roltsch and Gage, 1990).

Although the host list for potato leafhopper is quite extensive, Caragana arborescens (pea shrub), Acer platanoides (Norway maple, especially the red-leaved cultivars) and Acer saccharum (sugar maple) seem to be the most common host crops that sustain injury in the nursery. These are the crops that should be monitored first, for early signs of adult potato leafhopper arrival in spring. Potato leafhopper can also be found on several other woody trees and shrubs such as Betula (birch), Ulmus (elm) and Malus (apple).

Susceptibility of a given tree species or cultivar is, at least partially, related to the time of leaf emergence. Several researchers found that those tree species or cultivars that initiate shoot growth the latest in the spring sustained the most injury (Townsend, 1989; Bentz and Townsend, 1997; Townsend and Douglas, 1998). This makes sense, since these trees would be the ones with the newest, softest most desirable foliage about the time potato leafhoppers migrate to the Great Lakes region. Take a look around your nursery; are the cultivars with the most leafhopper injury those that leaf-out the latest?

Effective scouting and management practices are required to help minimize potential damage of susceptible crops. Monitor for arrival of adult potato leafhoppers starting in mid- to late May. Yellow sticky cards can be placed out in the most susceptible crops (e.g. Caragana) and can be monitored one or two times per week, along with regular examination of leaves and crop rows for flying adults. In Canada, Tristar 70 WSP (acetamiprid, Group 4 Insecticide), Sevin (carbaryl, Group 1A Insecticide) and Imidan 50 WP (phosmet, Group 1B) are registered for leafhopper management in outdoor ornamental nursery crops. Applications of insecticides will help protect susceptible crops if they are made to coincide with the arrival of potato leafhoppers, before feeding injury is evident. Once leaves harden off and leafhopper populations disperse, crop protection is not as important.
There are some efficacy studies being conducted in the U.S. with various root zone application methods of imidacloprid, the active ingredient in Intercept, Admire and Merit (Oliver et al., 2009). Unfortunately, the soil drench rates that were used in these studies to give effective protection against leafhopper injury are above the maximum rates of active ingredient per hectare allowed on the product label. The researchers are also trying slow release formulations of imidacloprid, such as tablets (known as CoreTect in the U.S.). Oliver et al. agree that more research is required to quantify the relationship between expressed leafhopper damage and economic consequences for tree producers.

An exotic fungal pathogen, Zoophthora radicans, affectionately known to some as “potato leafhopper disease” has been found to occur naturally in the U.S. The fungal disease is most common during cooler, wet weather and usually occurs in late July and August. For woody nursery crops, that’s too late, as potato leafhopper damage was done in June. For annual crops, leafhopper disease in summer is a welcome sight. There is some limited research with microbial pathogens for leafhopper management with the hopes of making a commercially available crop protection product.  Jennifer Llewellyn may be reached at 519-824-4120, ext. 52671, or by email jennifer.llewellyn@ontario.ca. Her Nursery-Landscape Report can be found at  http://apps.omafra.gov.on.ca/scripts/english/crops/agriphone/index.asp.