The bolder the risk, the bigger the gain. From armour stone to timber frames, from tiny houses to vast estates, each landscape project brings a fresh set of challenges and rewards.

For the 2022 Design/Build Issue, Landscape Trades asked four landscape professionals from across Canada to describe their most ambitious projects. We wanted to learn about the barriers they broke through and what they learned along the way.

From St. Johns to Vancouver, Ottawa and Kingston, here’s what they had to say. 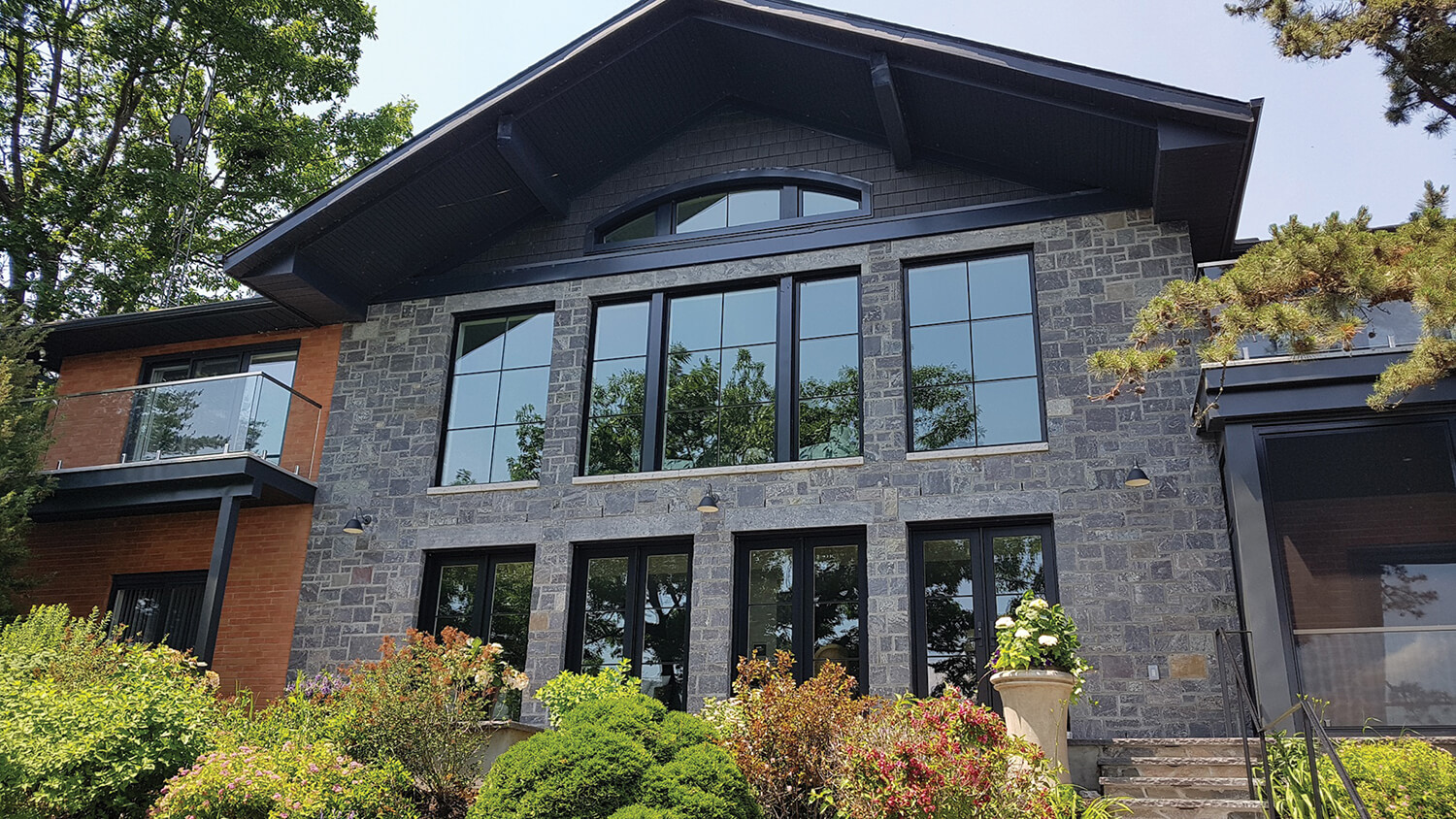 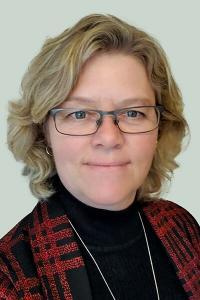 Derue described ‘Westwinds,’ a waterfront property in Mallorytown, Ont. as one of the most ambitious projects she has completed to date. The property sits on a hillside beside the St. Lawrence River in the 1000 Islands Region. Hired to lead both the home renovations and the landscaping, the sheer volume of design choices and problems to solve made it a monumental task. The project was anything but straightforward—a challenge Derue said she was thrilled to take on.

The most technically difficult piece was finding room for their new septic system. The size/shape/elevation of the property, the close proximity to the river and the filter bed size left very little room for everything and it had to go in their front yard. Set back constraints for the tanks from the house and lot lines also made placement for the new driveway very challenging. Together with the septic installer we created a proposal and then brought in a structural engineer to re-enforce the design with a tiered L-shaped concrete wall on the north hillside so we could essentially create a new usable space to hold the septic bed.

Was there any point where you thought this wasn’t going to happen?

I always thought we would get to an end point, but the winding path getting there had a heightened sense of urgency to get all the details ‘right.’ I never assume I can solve all the problems and seek out others in their field of expertise to assist when making important decisions.

The septic was a surprise!! It began to fail after the house renovations had started and so the landscape plan for the front yard had to radically change. The bonus from the large footing wall excavation at this site was that it provided enough large granite boulders to construct a natural stone retaining wall to hide the new septic tanks and edge of the concrete septic wall at the driveway entrance.

I learned that we never really know what we are capable of until we try. My ‘try’ now is a whole lot more capable and nuanced than what it was 20 years ago, but previous to this project I might have held back and done less. My takeaway is that if we never put ourselves out there, we never know what new and exciting things we have to offer. 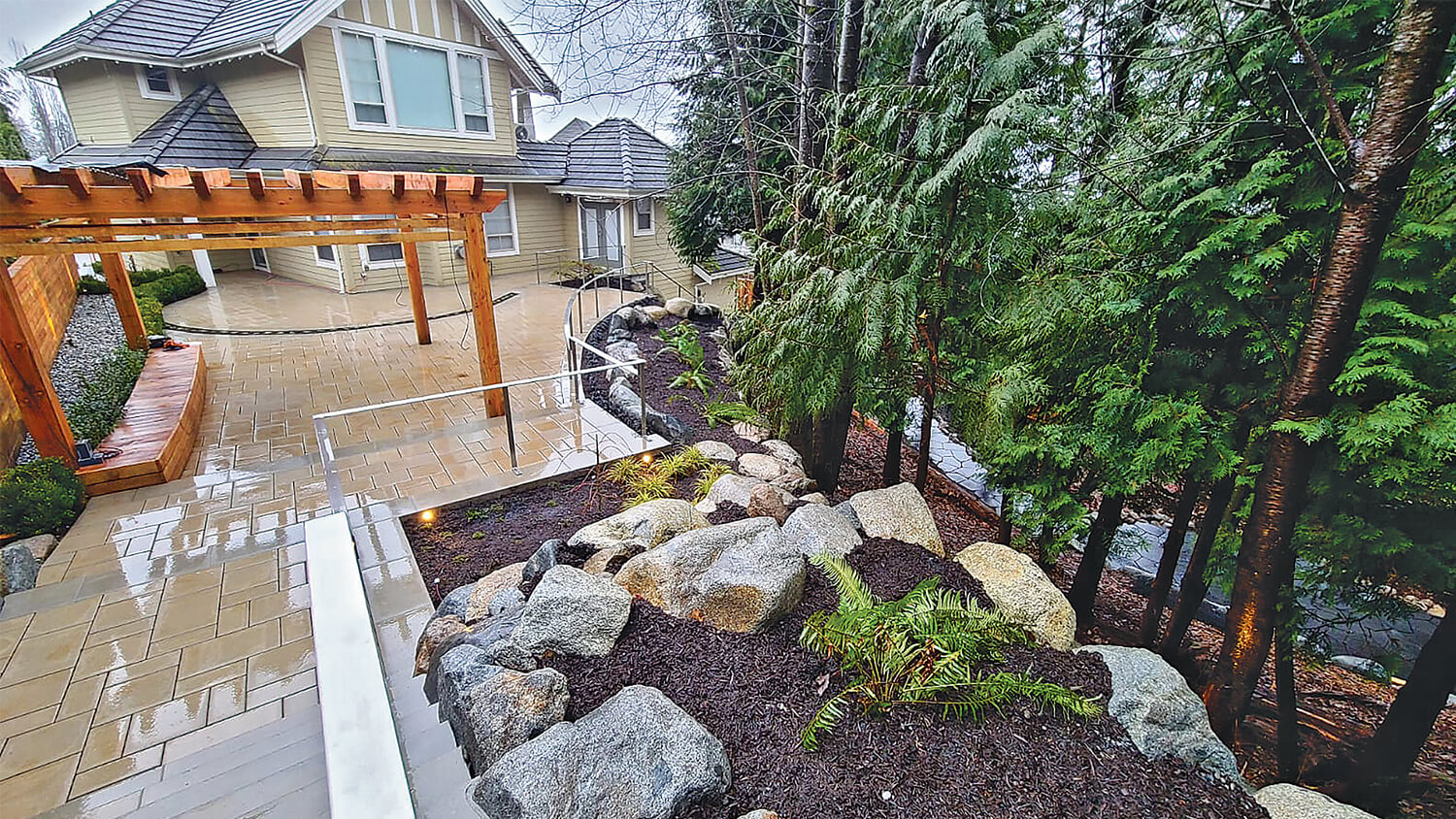 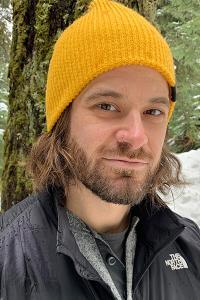 Calumma Creative Landscapes was hired to create a spectacular build with extreme attention to detail. One of the highlights are its multiple staircases that required precise cutting to accommodate large boulders that sit flush along the sides. There is also a custom curved stainless steel railing, with fasteners hidden under the pavers to give the impression its coming up through the stone.

Fall in the Lower Mainland of B.C. is VERY rainy. On this project we had 31 rain days, and we had three weeks of abnormal snow coverage which prevented us from working. There wasn’t much we could do to resolve the weather, although some days we worked under a tarp.

Was there a point where you didn’t think it would come together?

Due to the large scope of work and the large wish list, the project came in over double what the client wanted to spend. I didn’t think they would proceed because of this, and went back and forth with them on the pricing, taking out items, proposing new ideas, etc. However, they ended up going ahead with everything, and adding even more to the scope of work while we were on site building (such as a beautiful flagstone patio inside the ravine).

I try to solve all the problems on a job before stepping foot on site. I was, however, surprised by the fact that they almost tripled their budget for the build. That doesn’t usually happen!

If you want to build high-end projects, price them out that way. You can always scale back. Show your clients what it takes to build something that will be mind blowing, and show them those costs. If they want it, they can have it. But if they want to scale back, you can show them the things they will need to remove in order to bring the budget down. This particular client saw our vision, and understood what was involved to make it look a certain way. And no matter where you look on this property, it is clear that it was built with love and passion for creation. 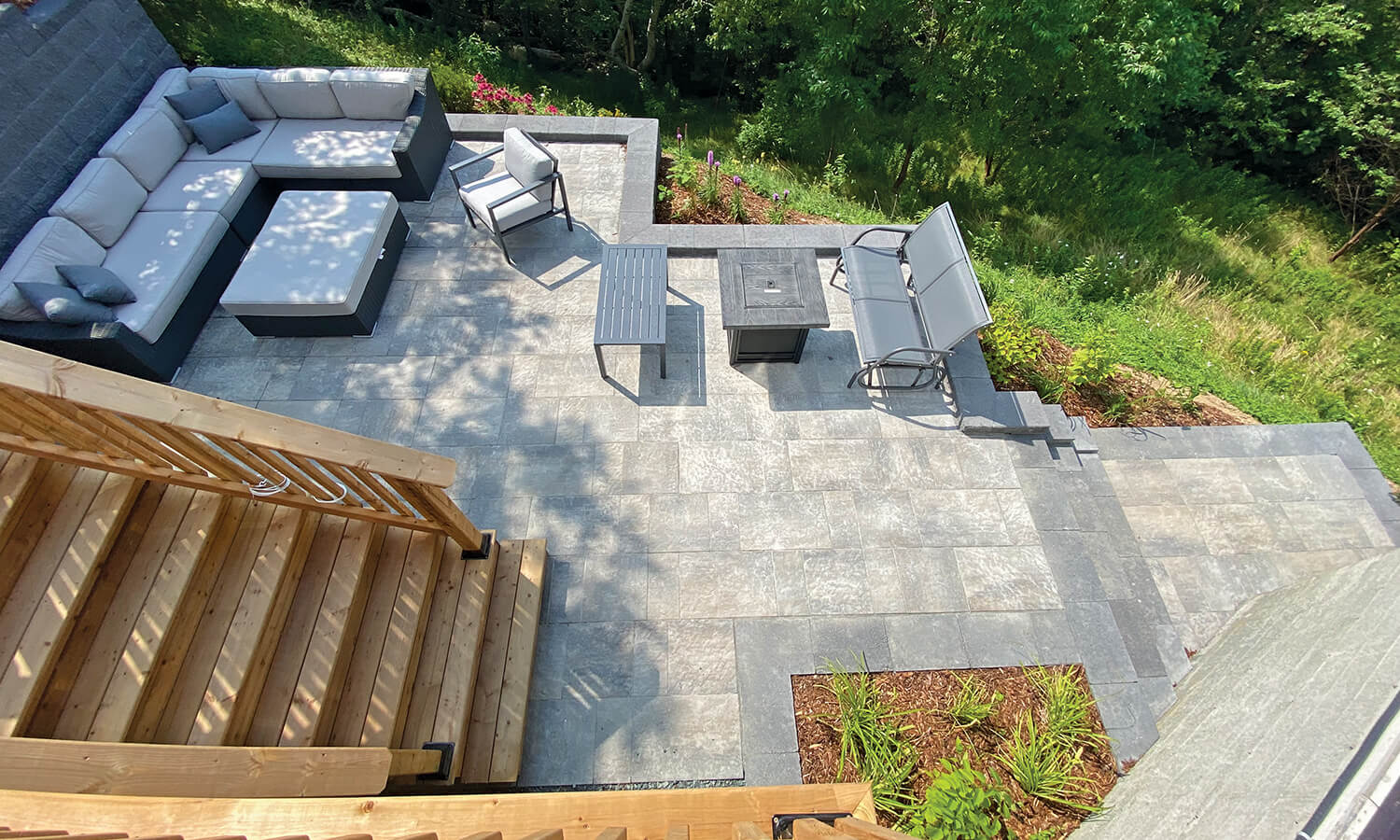 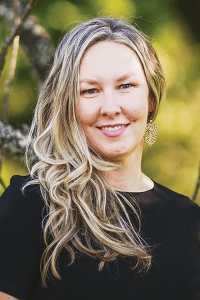 AIRO Landscapes is used to designing around the rugged terrain of Newfoundland, but working on the Farm Road Project presented extra challenges. The existing site had a very small footprint and a steep grade. The property’s backyard was on a hill that had a drop of about 75 feet to the tree line from top to bottom. It was a feat of engineering to build an to build a patio large enough for entertaining, without distubing the natural without disturbing the natural environment or endangering the crew.

The most difficult part of the project was the topography. We had to manipulate the land to work with the grades while staying true to the design intent. The area in front of the lower door only had an area of eight feet before there was a drop of 50 ft. We had to connect the lower and upper areas and create a comfortable seating area on the lower level, about a 15 foot difference.

We worked with the grades and raised and lowered transition/walking areas and seating areas. To create a larger level seating area to the side we then installed a large retaining wall with timber steps to the upper area built in. When digging into the seating area bank we uncovered an old concrete septic system. This caused us to stop work. The tank had to be pumped out, filled and compacted in. We removed the concrete overflow portion of the system to have enough room to install the geogrid to maintain the structural integrity of the wall.

Was there any point where you worried you might not pull through?

At the beginning of the construction project, we were concerned about site constraints. Our team lead joked that this project was impossible, and that we should leave. With a limited area to work with, a steep hill, and an overhang roof that was low, we had to ensure that we had a large enough area to create that much needed outdoor lounge area. We spent a lot of time in site planning mode analyzing grades before much of the work started. Using our site transit level, we made many marks on the walls working with the grades. When we began excavation, we also had to create a small road to get equipment down to the lower area safely to build the project. We also would often stop and go back to the drawing board to analyze the grades to optimize the area we had to work with, tweaking the design as we went.

We anticipated that this project was going to be a challenge. This was a design-build project and it evolved constantly between drawings and construction. As the designers we were always onsite guiding the construction team. We also made sure to choose the right construction materials to ensure this project would have structural integrity.

Key takeaway is to not let a challenging site stop you from taking on a project! This project was very rewarding to see completed and is now a very special space for our clients to enjoy. 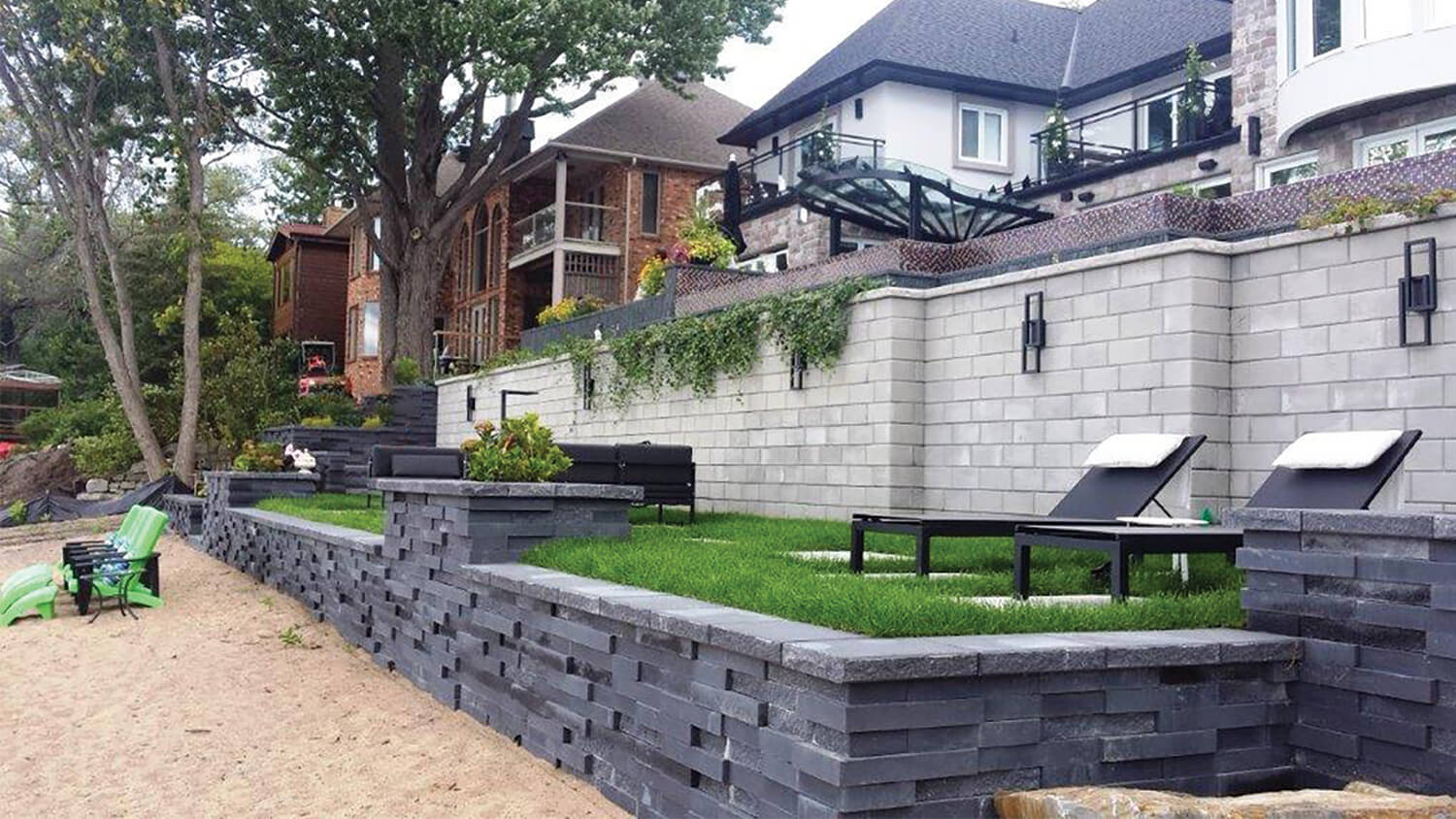 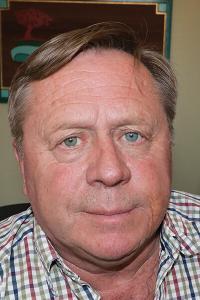 Ian Stewart recalls a project that was a race against Mother Nature. The Yards Unlimited crew was forced to start work on a waterfront property sooner than expected after it was badly damaged by a rising Ottawa River. The existing dry stack retaining wall had been destroyed and a second record-breaking flood was imminent. The crew had to remove all the old stone, shore up the pool by pouring a deeper concrete foundation under the existing pool walls and then install new retaining walls constructed on concrete foundations well below the sand beach level — all while watching water levels rise and waves crash against the shore.

The most difficult part was shoring up the existing pool foundation. We had to work on it in sections so the pool would not fall down. This was all being done while Ottawa was experiencing more flooding.

Was there a point where you thought you wouldn’t pull through?

Yes, many times we thought we were beaten as the water kept rising and it became very dangerous to work on the site. We actually had to delay work for safety reasons. Fortunately, the pool did not move and we were able to continue work after the flood waters started to lower.

This was a total surprise as the Ottawa River exceeded the 100-year flood levels so quickly. Many parts of the city and surrounding areas were under water.

Get help from engineers and always overbuild when around water.