You would have to have been living under a cabbage leaf to not know that the summer of 2012 was warmer and drier than normal. It all started with a record heat wave in mid-March and the record-breaking barely stopped all summer.

There were some of the surprises over the summer. It was quite remarkable to me how well a lot of the turf came back after four to six weeks without substantial precipitation. I was a bit of a doomsayer. Observing the turf and the lack of rainfall week after week after week, I was pretty convinced that we would lose substantial amounts of turf cover as a result of little rain. What we did observe was: Let’s examine each of these observations. Light textured soils (you can include sloping areas where water tends to runoff and not percolate) did not survive the dry conditions that well. In those areas, on first observation, it looked like the turf was coming back. When looking closer at what comprised the green plants in the fields, it was mainly weeds. With Fiesta being the only tool in the toolbox at the moment to control broadleaf weeds, the weed encroachment is a difficult situation.

Again, the surprise this summer was which insect did the most damage. You would think in a summer like this one, the hairy chinch bug would be the culprit. In my travels, the insect that I observed causing the most damage was the bluegrass billbug (Figures 1 and 2). You can tell the difference between damage from these two insects by doing the ‘tug test.’ If the turf pulls out easily when tugged and there is sawdust-like frass (excrement) in the thatch, this is most likely the damage caused by the bluegrass billbug. If the damaged turf does not pull out easily, the damage is most likely to have been caused by hairy chinch bug.

I am not sure if it was just the selected sites that I visited this summer, but the majority of the insect damage in the summer seemed to be a result of billbug damage. This situation parallels that on the golf course where the bulk of the insect damage on golf greens was from the weevil relative of the bluegrass billbug that favours close-cut annual bluegrass (annual bluegrass weevil). 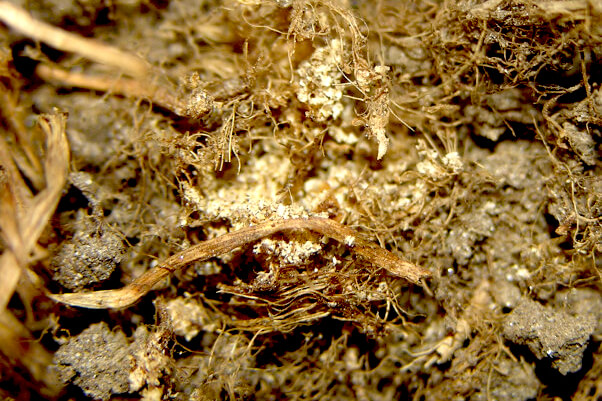 Sawdust-like frass in thatch where bluegrass billbugs have been feeding. Mid-summer predictions said there might not be sufficient soil moisture for grub eggs to hatch. Interestingly enough, I think this was true in some areas and not true in others. It really depended on when and how much rain fell in your area in July and early August. In the Guelph area, I have not seen a lot of grub damage. I travelled to the London area in late September to find certain areas that have extensive grub damage. I would say that it was just the tip of the iceberg with more damage showing up daily.

The local area we selected to conduct a European chafer grub trial did get enough moisture to result in a decent grub population, and we are grateful for that.

On the subject of grubs, there seems to have been a bit of malaise regarding grub treatments. Talking to suppliers of nematodes, it seems that sales of nematodes are down, which probably indicates that sales of nematode applications to homeowners from lawn care companies must also be down. Perhaps the dry conditions in late July and late August made people skeptical about the probable success rate of nematodes.

All that being said, it was an excellent summer to conduct research on the effects of irrigated vs. non-irrigated turf. We were also thankful to find good sites for European chafer grub control research.

It was also the summer of the initiation of my turf blog that replaced the Turf Management Updates. If you did not have the time to sign-up for my blog over the summer, now is still a good time to do that. The blog ONturf can be found at www.onturf.wordpress.com. If you go to the right-hand column and scroll down to the email subscription, type in your email address and then hit the follow button. You will get an email when something new is posted. I also tweet my blogs. You can follow me on twitter at Pamela Charbonneau@ONturf.
Share
Tweet
Mail