About a year ago Garnet McLaughlin and his wife Alexia, co-founders of outdoor recreation company Cobequid Consulting, based in Economy, N.S., received a video from a family in New Brunswick. McLaughlin said, “The mother is like, ‘I can’t thank you enough, it’s amazing what happened’,” as he recalled her emotional message. The woman was referring to one of Cobequid’s installations, a cedar bird’s nest swing that can seat up to five children. One of her children was autistic, non-verbal and had always shunned all contact with his siblings. The mother told the McLaughlins, “He’s 12 years old, they have no relationship and we’ve tried everything. But we went to that park, he climbed in that swing and his brothers and sisters sat with him and I can’t tell you what that meant. And they’re there every day now, and it’s the whole aroma of the cedar, the wood surface, and the swing ... I can’t thank you enough.” 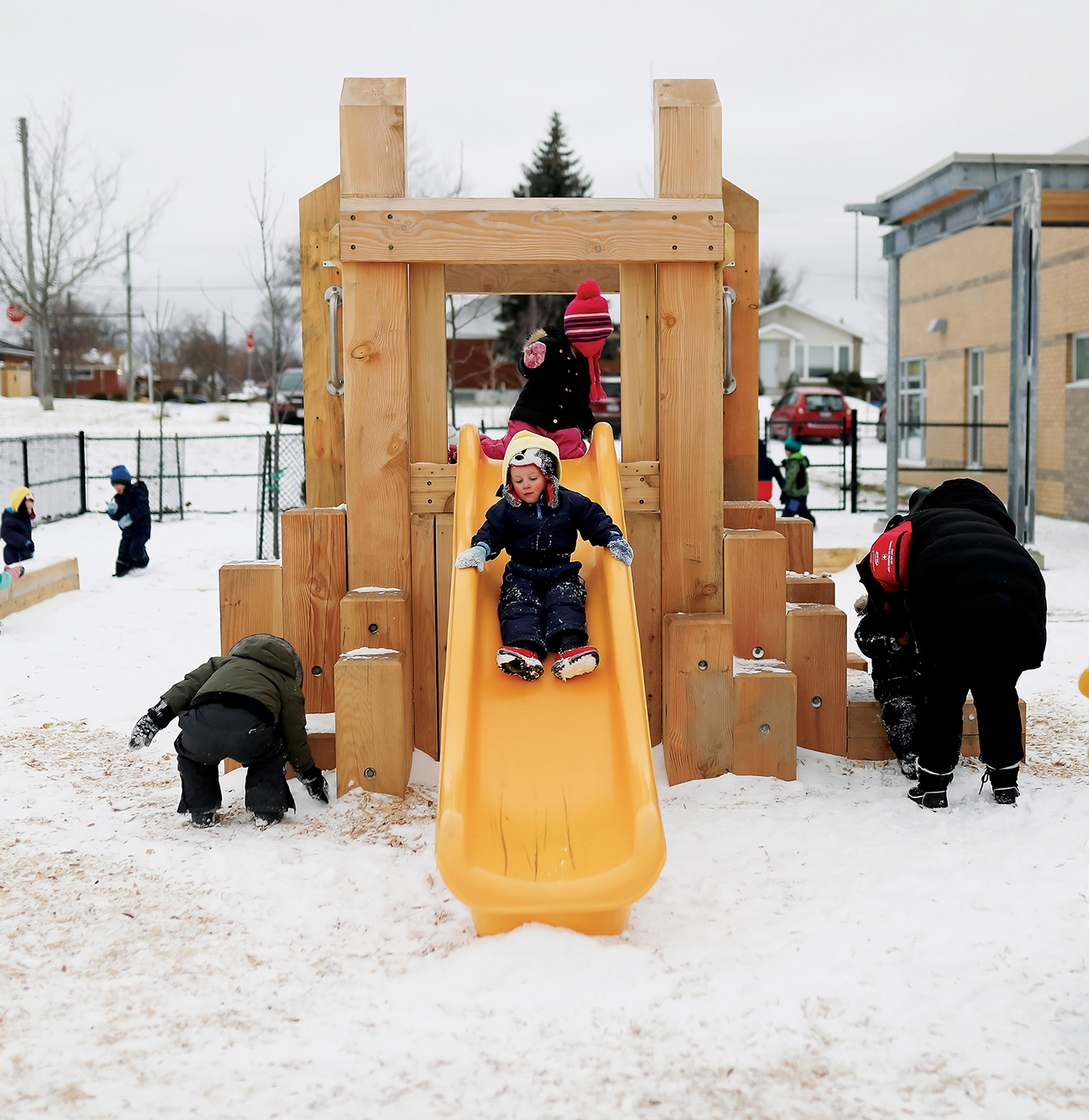 Natural playgrounds give kids a chance to use their strength, muscles and five senses. Photo: Pam West Photography 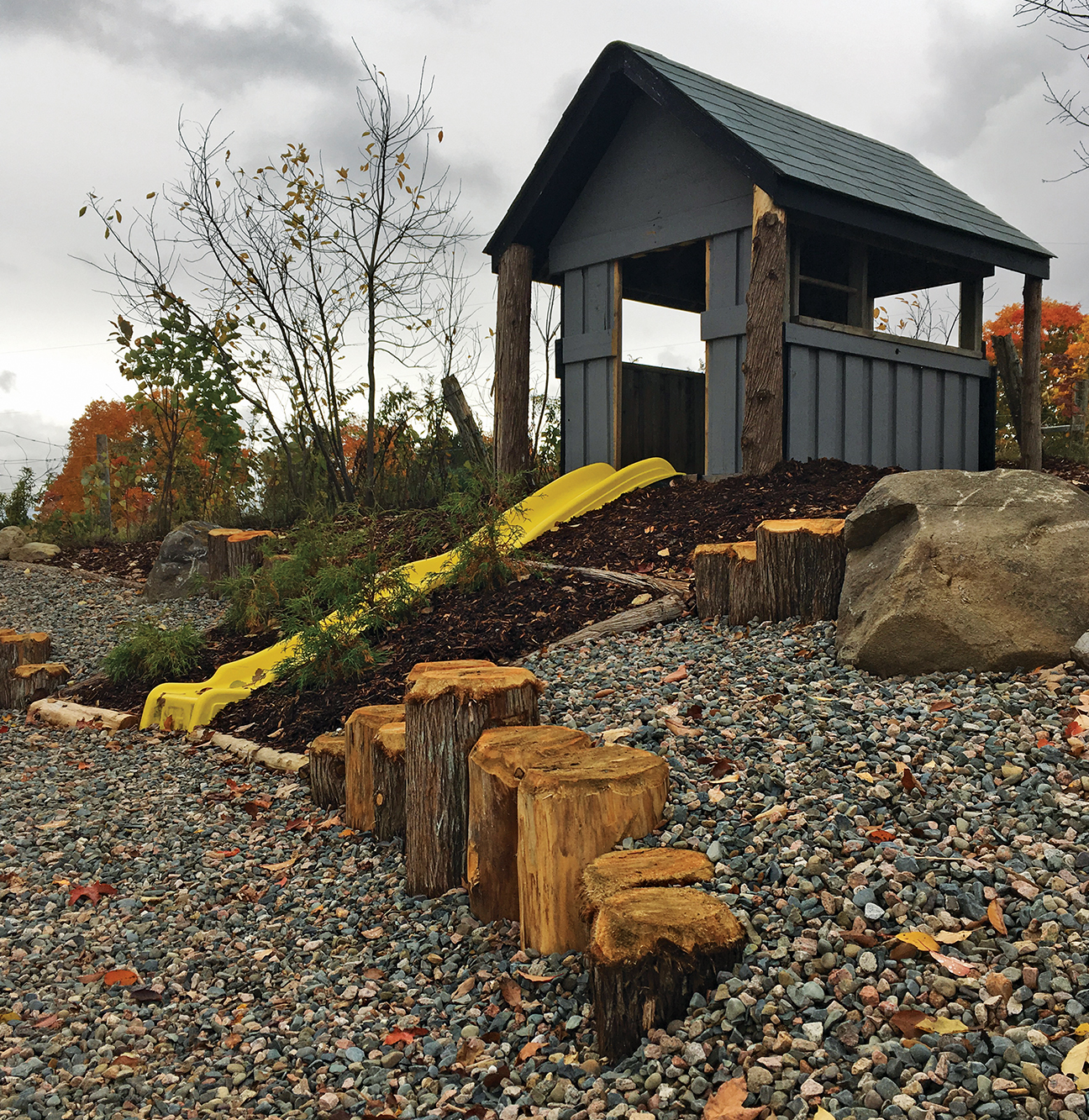 “You can’t get that with a play structure that’s been assembled out of plastic and steel,” agrees Dave Milburn, founder of Focal Point Landscape Design. His Fredericton, N.B.-based landscaping company ventured into the natural playground space only recently, but has already struck a chord. “The proof always comes a couple of days after we finish, with the emails and the calls saying we can’t get the kids inside; they show us videos of what the kids try to do,” says Milburn. For Milburn and his wife, who helps run their family business, the spark for their new venture was right at home: a daughter who just turned one. As part of their landscaping business, Milburn had worked with schools and was shocked to see the change in how kids play now. “We waited many, many years to have our daughter, adopted from Nunavut,” says Milburn. “We had spent so many years knowing what we wanted for our daughter, and that is to be exposed to nature. That’s the way we grew up and that’s the way we want our lives, and all of a sudden there was a place to put it in our business which was really, really neat.” Focal Point’s natural playground venture is still in an “early stage,” according to Milburn, having completed a couple of very basic projects and working on two more. One involved sawing an existing playhouse in half, moving one part to the top of a natural hill, from where kids could use a slide to exit.

While definitions vary, a natural play space is loosely understood to be one that uses natural materials and often incorporates natural topographical features like slopes, streams, stumps and logs. The idea is to correct what is widely recognized as this generation’s nature deficit disorder. As more communities discover the benefits of providing natural playgrounds for children, or at least incorporating natural elements into conventional play spaces, new business opportunities are opening up, often filled by companies that already have expertise in landscape design and build.

Natural playgrounds are suited for all weather types, built with natural materials.
Earthscape, based in Elmira, Ont., started as a typical landscape design and build firm 15 years ago. Now, having grown to a company with about 80 employees, it deploys over 50 of them in its playground business. Laura Hilliard, the company’s spokesperson, says, “All the things we build have very detailed engineering that goes into the design and construction. They are all built with natural materials and they are often in a setting that is designed to be more natural looking.” She has a shorter, kid-friendlier term for their award-winning structures: “epic.” In fact, Earthscape, which gets three-quarters of its business from the United States, is among only a handful of companies worldwide working at this scale in the natural play spaces sector. Their projects have ranged in size from just 60 square meters to over 4,000. Another leading Canadian company in this field is Bienenstock Natural Playgrounds, founded by Adam Bienenstock, widely regarded as a pioneer in the industry.

Changing behaviours
The demand is coming from various quarters, including residential customers, municipalities and early childhood learning centres and daycares. A big push for the idea has come from child development experts. Milburn, who counts Bienenstock as a mentor, points to research in his pitch. “Not every kid wants to run and jump and hang, some may just want somewhere to sit quietly, maybe read or play a game together like role playing. So we look at how to create somewhere for fine motor skills, somewhere for auditory skills, social skills like imagination or problem solving, and try to engage all five senses as much as possible.” He believes natural playgrounds can be helpful in treating behavioural issues. “Sometimes kids have not been exposed to something they can use their senses on, use their muscles, their grip strength — so all of a sudden what was kind of pent up behavioural issues in the classroom can change when exposed to a different natural environment,” Milburn says.

Ironically, the playgrounds also aim to change behaviour of parents. As Hilliard explains, “Parenting has become more hands-on, you hear about helicopter parenting where parents want to bubble-wrap children. But there’s been a counter recognition to that, which says children actually are more likely to injure themselves or not develop fully physically when they don’t have opportunities to play and take risks. So, building play structures and outdoor spaces that are really, really safe, where playground safety becomes the driving concern — when you do that, it actually becomes a negative experience for children.” 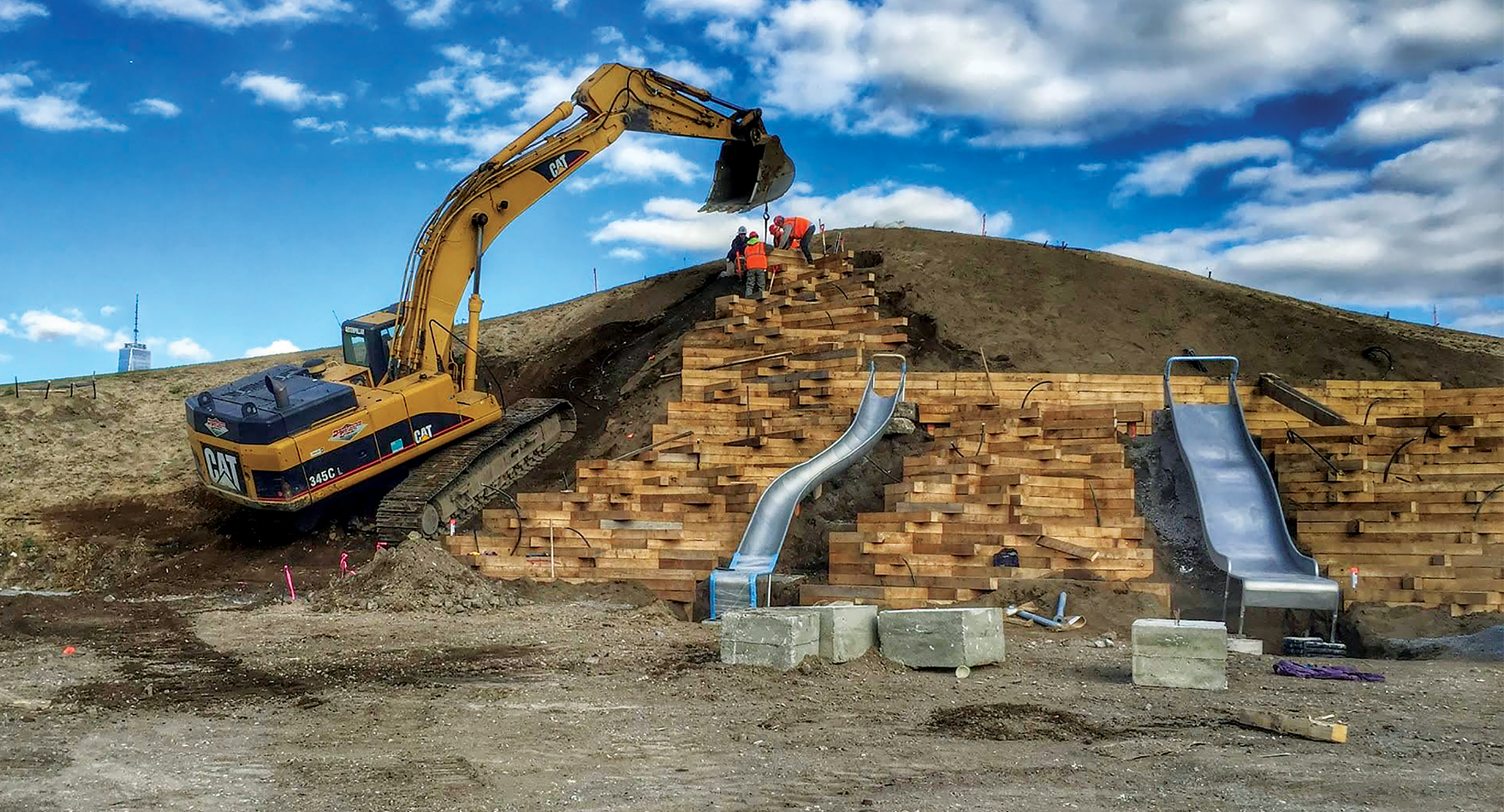 Natural playgrounds can be an impressive undertaking and contractors must adhere to federal and local regulations. Photo: Bedford Carp
That doesn’t mean natural playgrounds are a free-for-all field where anything goes. Companies adhere to federal and local regulations that may differ in different regions. “In Canada, the Day Care Act has regulations about childcare spaces, school boards have their own rules. There are a lot of limitations that you have to creatively work within to design really interesting play spaces,” said Hilliard. There are also the Canadian Standards Association (CSA) guidelines for children’s play spaces and equipment. Cobequid’s McLaughlin says, “If you’re a playground installation company, you would or should have your own licensed inspectors on staff. A lot of municipalities have their own inspections as well, so two inspections are done.” Accessibility is important, too. Cobequid has a staffer who is clinically blind, to advise on issues like colour perception and surface transitions. Adds McLaughlin, “Every site we do now has stainless slides because of kids with cochlear implants, and the static risk from plastic.”

Understanding the value in costs
As fast as this business is growing, if it’s not growing even faster, one reason, according to McLaughlin, is community buy-in — especially regarding costs. For instance, Earthscape’s projects can range from $100,000 to over a million dollars. As Milburn explains, “People have to buy in to the value of development and the cognitive change and benefits for the kids this presents, in order to understand the costs.” Steel and plastic have long been mass-manufactured and cost effective. “But we’re looking at components that are hand manufactured, hand carved at times, from naturally occurring materials like wood and stone that takes a) craftsmanship, and b) the installation knowhow so it’s not going to decompose or rot,” says Milburn. “But the beauty of most of this is that it doesn’t get hot, so there’s a big change in the sensory engagement.”

As the world tries to move away from plastic, the demand for this field can only grow, especially with a helping hand from the world of social media. McLaughlin says he hasn’t “spent a dime,” but gets enquiries for fabricated products from around the world, just by being found online. Cobequid is usually booked a year in advance, with plans including branching out beyond the Maritimes. Hilliard says Earthscape works on anywhere between 50 and 100 projects every year. Milburn aims to grow enough to have a team dedicated to natural playgrounds. Companies in this field are also looking to hire workers ranging from welders and carpenters to CAD users. Looking even further ahead, Milburn quotes Bienenstock to say natural playgrounds can be an investment towards tackling a persistent complaint of the landscaping industry — the shortage of skilled labour. Children exposed to nature early, the theory goes, will grow into adults interested in landscaping — as employees, employers and clients. Child’s play, it seems, is not quite child’s play.

Benefits of natural playgrounds
Several studies have noted that exposure to nature and natural play spaces is highly beneficial during children’s early development years, providing better outcomes than conventional playgrounds constructed of plastic and steel. Some of the benefits include: Indira Kannan is a Toronto-based freelance writer.