New hope for the chestnut

The American chestnut, Castanea dentata, once comprised 25 per cent of southern Ontario’s forests, and was considered by many as the most important forest tree. But numbers plummeted in the 1940s. So great was the demise, most Canadians have never tasted a true American chestnut from Canada; we are roasting larger imported or hybrid chestnuts. Like the apple tree, the chestnut has been developed, bred and adapted by hobbyists, professional growers and connoisseurs of healthy food. Today, many forms are widely available for landscape and forestry uses — and like the apple, there are concerns still to be overcome.

The history of the chestnut in Canada is greatly romanticised, and this is both a help and hindrance to the reintroduction of native chestnuts. Since the loss of this magnificent canopy tree, a few photographs of significant chestnuts have circulated. But the truth is, like beech and elm, most chestnut trees never reached the size of these monsters. The current record for an American chestnut is from Belgium at 36.9 m high.

“The story of the chestnut tree is a sad one,” said Ernie Grimo of Grimo Nut Nursery in Niagara-on-the-Lake, Ont. “With the right work, it can be recovered. Customers love chestnuts but we can’t provide enough. Unless the stature is back, they won’t over-top every other tree and they won’t survive in a forest setting.”

Dennis Fulbright, a retired U.S. chestnut researcher and current chestnut consultant who does mechanical chestnut harvesting, said, “Bringing back the chestnut is ecologically significant, not just as a commercial venture. Without change, the ecology will be lost.”


Threat from the East

In 1876, and again in 1882, Japanese chestnut (Castanea crenata) seedlings were imported to the eastern U.S. for commercial growing of a larger chestnut on a shorter tree, incidentally carrying what was called Asian bark fungus. We now know the disease as Cryphonectria parasitica, or chestnut blight. The Asian trees were resistant to the condition and it was not thought to be a problem. In 1904, in the New York Bronx Zoo, the American chestnut was found to be in decline. Between three and four billion chestnut trees were destroyed, and by 2007, the American chestnut in Canada was listed as endangered.

We now know chestnut blight kills saplings in one year and mature trees in a couple of years. From the root of a mature diseased chestnut, shoots spring up that will grow to about 9 m and 100- to 150 cm in diameter, or less than half the tree’s healthy potential. On sunny sites, these may reach flowering size, but it is rare for any to seed.

Another problem, once the disease was identified, was people in general gave up on the tree, and healthy and diseased trees alike were cut for their valuable wood. We now know some of these trees were likely tolerant to the condition, but their genetics are forever lost.

Pioneers and First Nations loved the sweet nuts and they carried the seeds across the continent. Some chestnut trees have done well outside its natural range, especially those planted in the American southwest, where wet winters and dry summers discourage the blight. Healthy specimens are known to be on the Dalhousie property in Nova Scotia, in Sault Ste. Marie, northern Ontario and Revelstoke, B.C., east of Vancouver.

Search for a solution

The Canadian Chestnut Council implemented a project searching for these often-solitary trees. A 2017 University of Guelph study suggested there could be many more chestnut trees growing in Ontario than previously thought, possibly as many as 2,000. Ontario seems to have greater survival rates than other parts of the chestnut’s natural range.

Once found, “mates” are being planted in the vicinity of the solitary chestnuts, to encourage cross-pollination, as the chestnut self-pollinates only about one per cent of the time. The chestnut mates are not just any chestnut. These are trees being propagated using a new technique developed by Dragan Galic at the Simcoe Research Station in Ontario. They start as a true American chestnut seedling that is grafted with mature stock. The resulting grafted seedlings are outplanted, with hope and expectation they will produce catkins in five to six years, and burrs a few years later. The grafted stock is the result of crossing the hardiest and most tolerant Ontario chestnuts under study. If the graft fails, the root stock is still expected to grow to a true Ontario chestnut tree, although it will take longer to produce pollen and it is unlikely to live to maturity at 250 years.

Chestnuts are described as “tricky” to pollinate. If the tip of the burr is damaged, there will be no pollination. Pollen must land on the tip.

The Simcoe Research Station had 5,000 seedlings for outplanting in 2018, with a waiting list for more. Researchers are currently in the third cross of tolerant or less susceptible Ontario chestnut with tolerant Ontario chestnut. They also have crosses with Chinese, European and Japanese chestnuts, back-crossed to 93.75 per cent native genes, while maintaining a level of tolerance to the blight. After inoculation, as expected, most of the F2 crosses died. 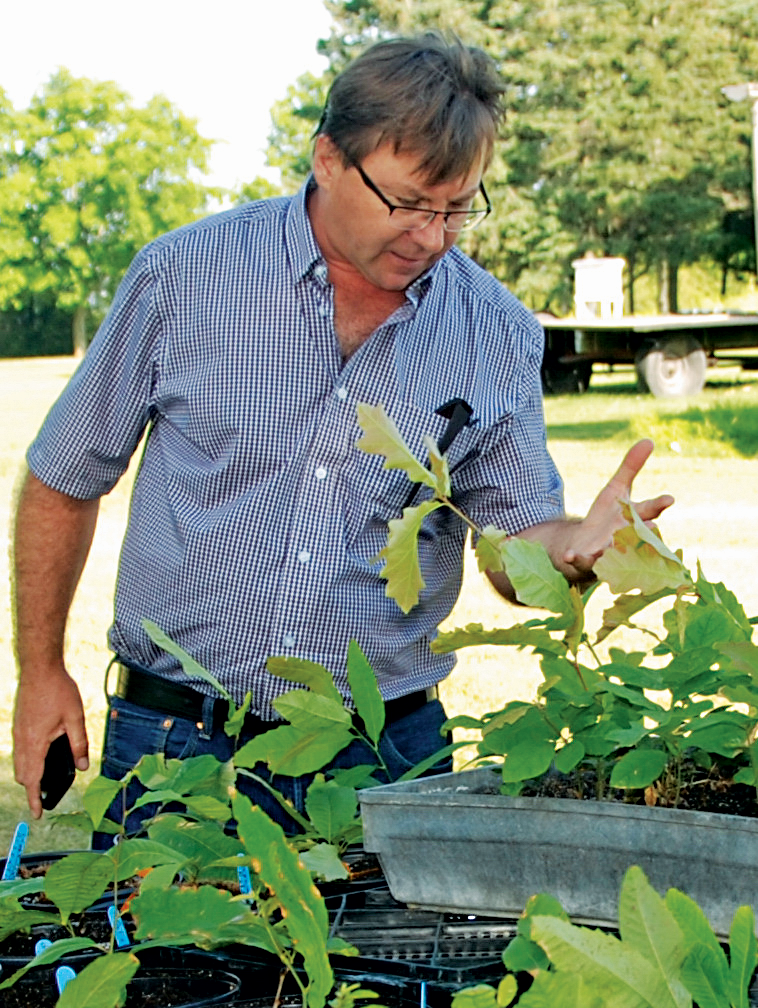 Chestnut researcher, Dragan Galic has developed a technique for grafting seedlings with mature stock to support early production of pollen.


Chestnuts are described as “tricky” to pollinate. If the tip of the burr is damaged, there will be no pollination. Pollen must land on the tip.

The Simcoe Research Station had 5,000 seedlings for outplanting in 2018, with a waiting list for more. Researchers are currently in the third cross of tolerant or less susceptible Ontario chestnut with tolerant Ontario chestnut. They also have crosses with Chinese, European and Japanese chestnuts, back-crossed to 93.75 per cent native genes, while maintaining a level of tolerance to the blight. After inoculation, as expected, most of the F2 crosses died.

“We have 26 different genotypes,” said Galic. “We have seen signs of healing.” [After the trees were inoculated with two strains of the blight.] “There is less disease in mixed stands with oak, beech and maple present. I am going to talk with a mycorrhizal specialist to determine if there is an association.”

Even as hope was shifting to expectation that these trees could be more than tender, short-lived, specimen trees and return to agriculture and forestry, the Oriental gall wasp crossed the border. As a new invasive species, there is nothing currently registered for it, but this is expected to change. The gall wasp, Dryocosmus kuriphilus Yasumatsu, arrived in the U.S. in 1974 and in Niagara-on-the-Lake, Ont., in 2012.

Chestnuts being planted for commercial harvest in Michigan are often a Japanese/European grafted cross. These trees, using clonal propagation methods and grafting, resist both the blight and the gall wasp. They are producing 10- to 30,000 lbs. of the larger nuts per orchard. “It’s about better cultivars for commercial harvest,” said Dennis Fulbright. “In Ohio, the presence of the gall wasp waxes and wanes. It never kills the trees, but it does reduce the flowering and consequently the harvest. Here in Michigan, we are planting more like California with specialized cultivars. We are marketing chestnuts in a big way. In orchards, people can afford to pay for treatments.”

Another promising area of research is hypovirulence, a virus that attacks the blight. In Europe, the virus spreads naturally, resulting in natural regeneration; there are now extensive stands of the European chestnut. The trees show cankers from the root up the stem, but they continue to survive, and in some cases, thrive. This virus can be inoculated into the trees.

In North America, although hypovirulence has been discovered, it has not spread naturally. A unique hypovirulent isolate found in Ontario is now under study. Some of the chestnuts in Simcoe had chestnut blight cankers, but their growth rate continued high and the cankers showed a level of healing. Not resistant, but they are native chestnuts, and chestnuts with a high percentage of native genes that showed lower susceptibility to the condition. In Michigan, hybrid crosses often do better than native trees with the inoculation.

According to Dennis Fulbight, “These trees are being planted in Michigan as mast species for wildlife. After three or four cut-overs, these trees become dominant. Foresters manage forests. When planting from seed you get a mix of tall, short, wide, lots of diversity. If you are planting for dominance you may choose a cultivar that is tall.”

“We are crossing for winter hardiness,” said Galic. “Resistance is first but chestnuts can be used again in agriculture, forestry and more. We need different characteristics. Ontario Provincial Parks will take only pure native chestnuts to break the isolates. Research takes a long time. Funding usually only lasts one or two, maybe three years. What can you do in tree research in one year?”

Galic said, “I love the chestnut. My father loved the chestnut. I will not retire until this is complete.”
Pat Kerr is an Ontario-based freelance writer.