Continue your investment with Landscape Ontario 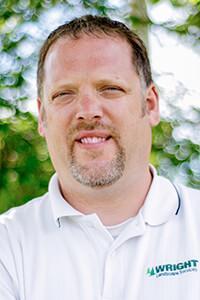 First and foremost, we want to thank you for your continued investment with Landscape Ontario. Without your loyalty and support, we would not be able to continuously provide the Landscape Ontario community with valuable benefits and actively develop our profession. Put simply, you make what we do possible.

This year hasn’t really been like any other, but together we have persevered through some of the most difficult times our profession has ever faced.

We hope you’ve been able to personally benefit from your membership with Landscape Ontario. If not, let us fix that right away! Call our Membership Team at 1-800-265-5656, or email us membership@landscapeontario.com to see how we may better meet your needs.

If, like most of our members, you are satisfied with your membership, consider renewing now. Your early renewal will help us plan for next year’s programming. Make sure to let us know if you have any suggestions. We’d love to hear your feedback!

Hear from members of our community 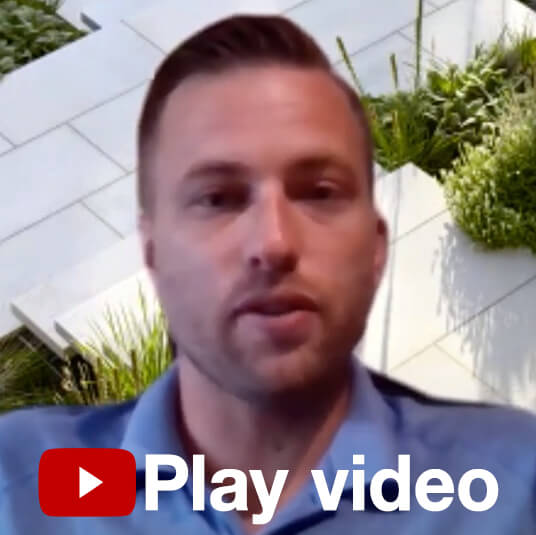 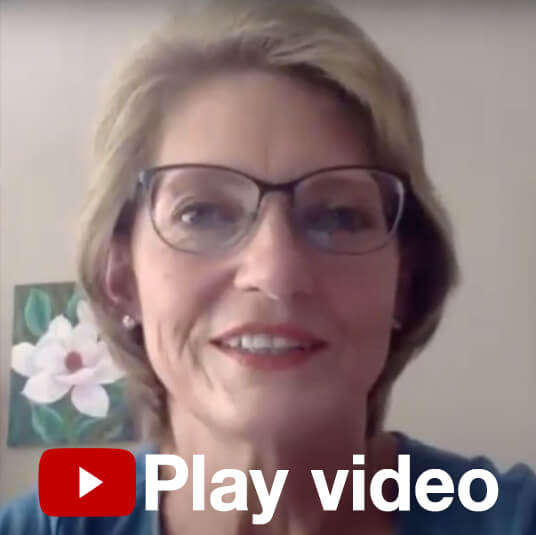 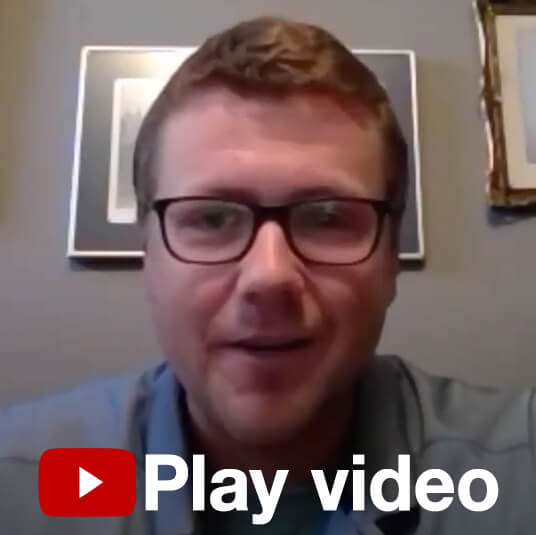 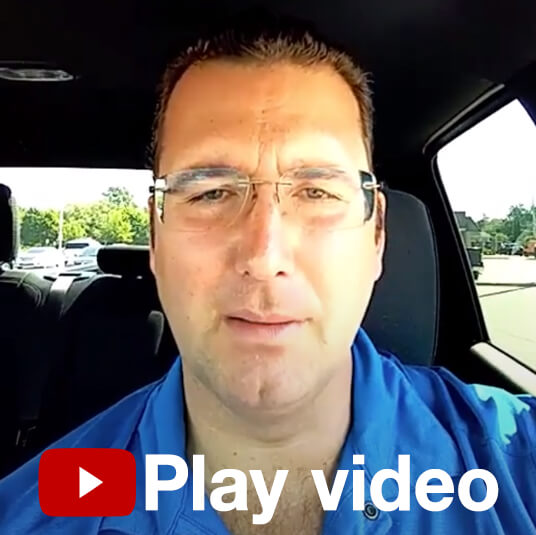 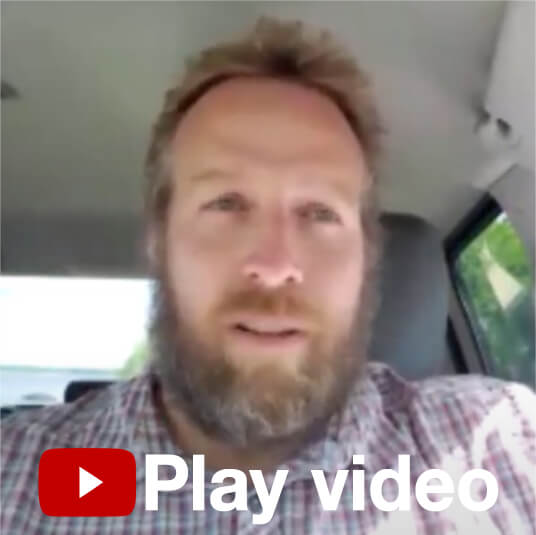 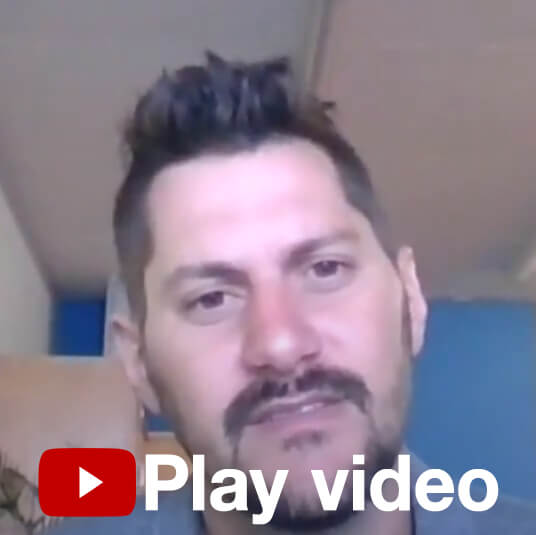 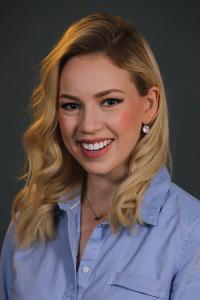 “Landscape Ontario, Meghan Speaking” is something you can hear me say five days a week, with a smile on my face. However, sometimes over the last four months, it became more difficult to keep that smile going. At the height of the pandemic, Landscape Ontario would have upwards of 60-70 calls a day, with members all wanting to know one thing, “Are we allowed to go out and work”? I would finish my day wondering how I was going to put on a brave face and answer this question again tomorrow. It dawned on me that although I was not going to be able to give members the answers they needed, I could do my best to LISTEN. That one word changed my outlook on what my “role” in all of this chaos truly was.

I listened to the anger and frustration, I listened to the tears and I listened to the hopeful attitudes of those ready to get back to work as soon as we saw that green light. I was able to have weekly conversations with members who would just call in to chat and see how we were doing. It was an experience unlike any other, but I truly feel that the hard work and dedication of our members was what got our industry back on its feet. In the face of adversity, we were able to persevere together. So what’s next 2020? Zombie apocalypse...we got this!

As membership renewals approach we hope that you have been able to benefit from being a part of our Landscape Ontario family. Whether you attended one of our seminars where you learned something valuable, saved money for your company through one of our endorsed supplier programs, or networking within our community with others going through the same issues that you might face, Landscape Ontario is here for you!

If you have any questions regarding your membership, any suggestions on how we can make your membership better, or if you would just like to chat, please feel free to give us a call at 1-800-265-5656. Thank you for your continued loyalty and support during these unprecedented times. Together we are one, we are Landscape Ontario! 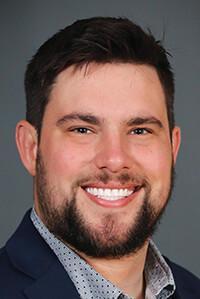 March 17, 2020 began like most workdays do for me. I made coffee for the commute up Highway 6 to Landscape Ontario’s Milton office. On the agenda that day was some editing for Landscape Trades and Landscape Ontario magazines, and prepping the weekly eNews email newsletter that would be sent out the following day.

Then, everything changed. Premier Doug Ford declared a state of emergency, stating there was now “some evidence of community transmission” of COVID-19.

A spring unlike any other was just beginning.

Immediately, Landscape Ontario’s Executive Director Tony DiGiovanni called a meeting with staff to determine next steps. What would the announcement mean for member companies? The landscape and horticulture professions were just ramping up for the spring season. What impact would the pandemic have?

Soon, a task force was created, led by long standing board member Alan White, owner of Turf Systems in Burlington Ont. A diverse group of members representing different sector groups and regions were invited to join the task force.

The task force began meeting each evening to determine how the association could best help members, and to coordinate communications with public health and government officials. The first step was creating a resource hub on Landscape Ontario’s trade website, HortTrades.com. There, task force members and LO staff worked tirelessly to provide the latest information, as well as safety resources and best practices.

In those early days, communication was key. The task force began sending near-daily update emails to LO members. They also launched the association’s first webinars. The “Town Hall” style webinars, which saw task force members answer questions from the audience, saw a tremendous response, with some seeing over 500 attendees join the online events.

Next, the task force shifted its focus to government relations.The timing of the pandemic could not have been worse for many landscape and horticulture businesses. Just as greenhouse producers and garden centre retailers were about to launch into the busiest months of their year, they had to close their doors.

Landscape Ontario, working through a government relations firm, connected with members of the provincial government early and often, making the case for our profession to be among the first industries permitted to get back to work first. The campaign was a massive success. In May (was it may?) Doug Ford specifically mentioned the value of gardening and visiting garden centres.

‘There is nothing better than a beautiful, beautiful garden with flowers, as my mother always told me,” the Premier said.
Soon, the entire industry was permitted to get back to work by following safety guidelines created by Workplace Safety and Prevention Services.

Now, many Landscape Ontario members are telling us they have never been busier. Enthusiasm for gardening, and the value people place on their outdoor spaces, have grown. These are positive developments not just for our industry, but more so for our communities and the environment more generally.

Over the three months since, the task force has held over 50 meetings, 25 webinars and countless posts on the resource hub. I was very proud to have a small role in ensuring members had the information they needed to keep their businesses safe and strong during unprecedented times. I have never felt more proud to be part of the Landscape Ontario community.

Professionals give more reasons to join

Infographic: LO by the numbers 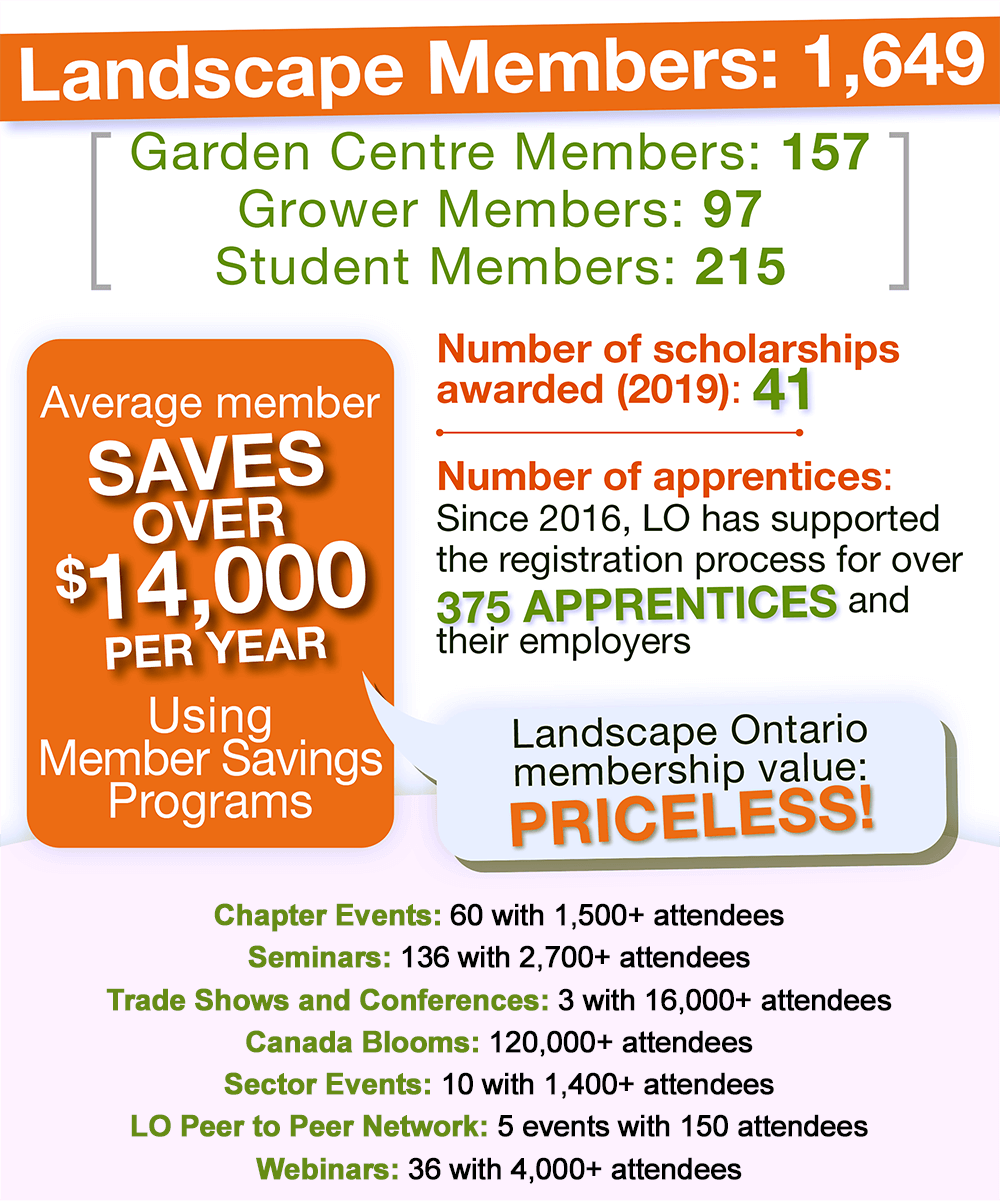 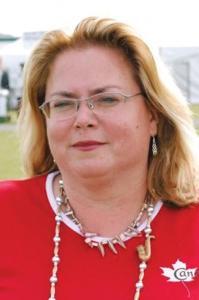 Preparations for the busiest season for the landscape and horticulture professionals typically begins in February and March every year. There are also consumer shows where members take part, engaging with the public and promoting the industry. In Ottawa, Living Landscapes at the Home and Garden Show is a major spring event. The word “typical” was no such thing beginning in March 2020. Words like pandemic, coronavirus, COVID 19, CERB, Emergency Shutdown, and cancelling of all public events quickly became part of everyone’s lexicon.

Home office worked quickly to start up a task force, representing all sectors of membership. Meetings of this group were to support members every way possible: through their connections provincially, federally, and municipally to answer the most important question on the minds of members: When are we going to be able to go back to work? This task force created great resources for members across the Province, as well as nonmembers, who were part of the profession, but not yet part of the membership of Landscape Ontario.

Staff wanted to be able to get the information to members for support. I spoke to Ottawa chapter members, and along with “getting back to work” they wanted to know how this Covid 19 situation was going to affect their business, their staff and families, their clients. Many were afraid they would lose everything.  Eastern Ontario members realized that although they were not yet on the ground, much preparation behind the scene could not happen. As all Landscape Ontario staff were kept aware of what members' supports were being created, this information was sent to members.  In phone calls, I reference the webpage and the webinars available. Many members had taken part in the webinars, gaining valuable information. Several members of the Ottawa Chapter stated to me that the reality of support during this time of crisis was the reason why they will continue to be members of Landscape Ontario.  Members supporting members during this crisis, was something I continually heard through my conversations with members.

The information sent to the government on the importance of the landscape and horticultural industry was not lost on both political representatives and the public alike. Getting back to work was utmost in the minds of all members. Now that work has resumed, with the safety guidelines in place, members that I have spoken with are busier than ever. They have learned to adapt and accept the challenges that this pandemic has created. They have all said the same thing:  there is strength in numbers, and support that went above and beyond what they thought their membership would involve.

Planning and continuing with the “new normal” will include events delivered differently, all the while supporting members, their staff, and families. It was a pleasure to be able to speak with Ottawa chapter members and let them know that there was support for them, through their membership.

And if you still need more reasons... 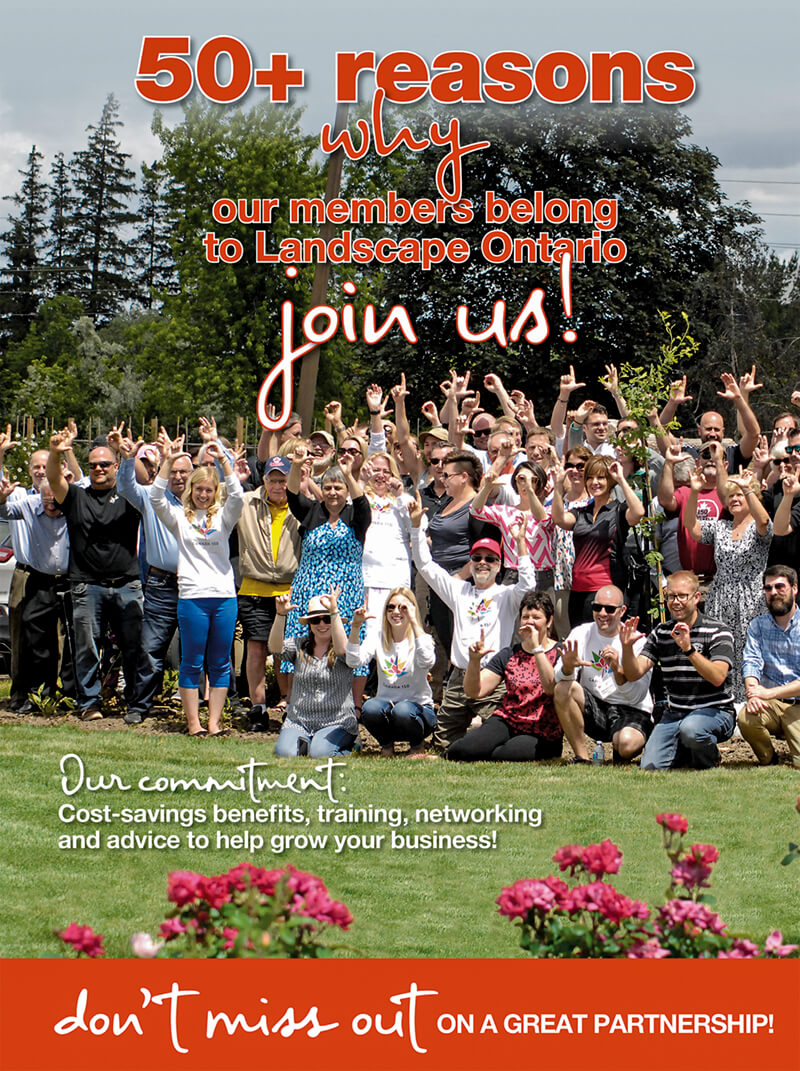 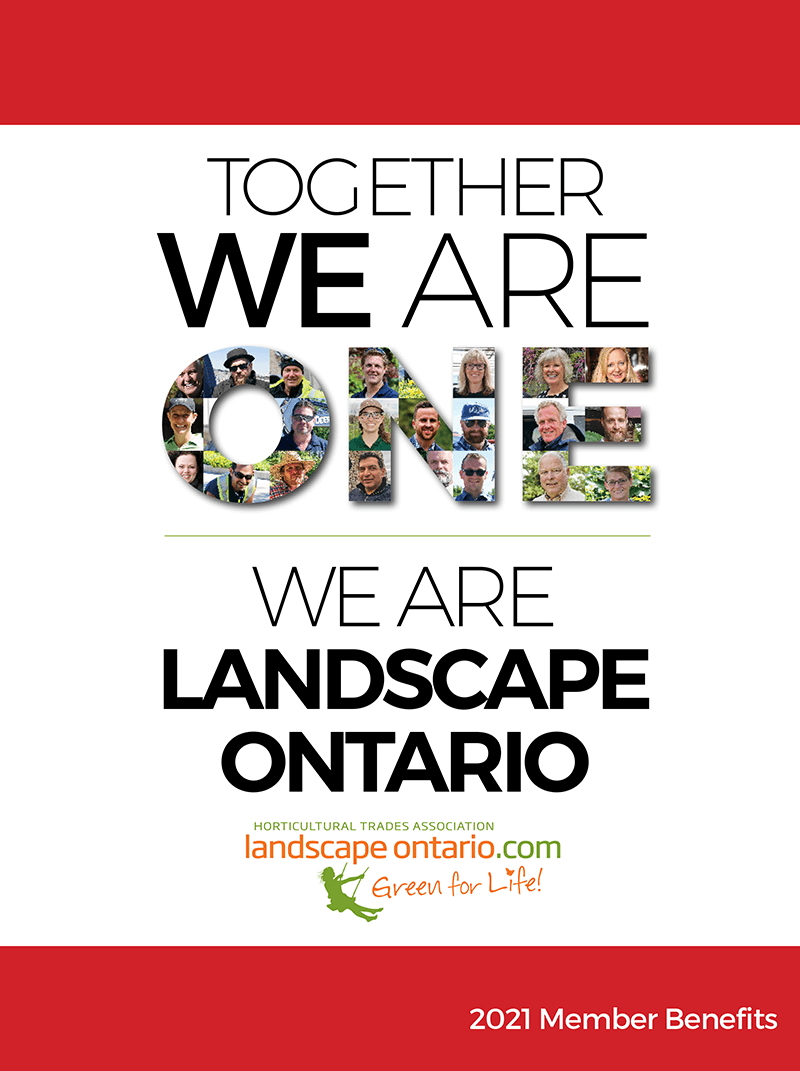 How do I renew my membership?

Once you receive your digital membership invoice please follow the link HortTrades.com/dues to pay your dues online. OR if you would like to “kick it old-school” we would be happy to take your payment over the phone at 1-800-265-5656.


Once I renew my membership what will I receive?

Once you have renewed your membership you will receive a digital membership package which will have your membership certificate for that year, legal advice number and endorsed supplier flyer attached and a yearly holiday card from the LO staff.


Can I pay by e-transfer?

Payment methods include Visa, MasterCard, Amex or cheque. We are no longer accepting goats as payment.

If you need to change any information, contact name, email address, phone number, blood type etc. Please email membership@landscapeontario.com and we will make those changes for you.


What happens if I can’t pay my membership dues on time?

CONE OF SHAME….kidding!! We understand that sometimes things come up that can’t be controlled. So if you are unable to pay by Sept. 1, please don’t stress. Please give your membership team a call at 1-800-265-5656 and we will be happy to figure something out for you.


Let’s say I’m going to renew, how do I take advantage of the member savings programs?

So you want to save some money for your business? *Alexa, Play “If I had a million dollars”* Landscape Ontario membership entitles you to take advantage of programs offering discounts on a wide range of business products and services. Most of these benefits are administered by the Canadian Nursery Landscape Association (CNLA). For a current list of offerings, visit the CNLA website at https://cnla.ca/learn/member-savings.


It looks like the membership categories have changed, where do I fit now?

Flashbacks to the first day of high school “but where will I fit in?” No need to worry, Landscape Ontario is here to help. Tasked by the association’s strategic plan to grow membership to 80% of the landscape and horticultural industry in 25 years, these new categories will make membership more accessible for new businesses looking to gain professional credibility and education. For more information regarding the membership categories and where you fit now please visit https://horttrades.com/landscape-ontario-makes-changes-to-membership-categories