Burmese immigrant, Aye Chan impressed owners at Woodhill Garden Centre so much that in just three years he has been elevated to a lead supervisor role.

Of the Six Thinking Hats model, Tyra Nguyen said she most often wears her Positivity Hat. Indeed, her checkered blue sun hat had a big orange smiley face on it when I met her one summer morning at Toronto’s Humber College. Tyra is one of the students in the Horticulture Technician Pre-Apprenticeship Training Program for Women, organized jointly by Humber College, Landscape Ontario and Skills For Change.

Originally from Vietnam, Nguyen became a Canadian Permanent Resident last November, and is one of the recent immigrants in the program this year. She worked in event management back home, but was unable to find equivalent work here. A friend who worked for the City of Toronto’s parks department alerted her to the pre-apprenticeship program and she snagged a spot just in time. Already, she has big plans. “I think to get experience you have to be ready to go from the bottom. But down the line, I don’t think I would be just doing this. I have the vision to manage a park on my own,” Nguyen said.

Workers like Nguyen would be a godsend for Ontario’s landscaping profession, which, according to industry experts, continues to face a severe, and growing, worker shortage. Michael Pascoe, Program Co-ordinator of the Horticulture Technician course at Fanshawe College in London, Ont., says this is partly driven by demographic changes, misconceptions among young Canadians about the nature of work and skills required, and competition from more lucrative sectors. Richard Zoltek, Program Co-ordinator of the Landscape Technician program at Toronto’s Humber College, agrees: “Parents themselves don’t value landscaping. They think it’s not a real job. I think that’s a direct result of poor guidance counselling. We don’t have enough exposure to promote ourselves to potential students.”

Meanwhile, employers are desperate for talent. At Humber College’s annual job fair this year, 38 employers showed up, each looking to fill two to four positions. As Zoltek points out, there simply aren’t enough students in his program. Pascoe estimates there are at least 1,600 entry level jobs across Ontario that are still unfilled, and says immigrants could help fill the growing gap. “Typically our industry has targeted North American people using the traditional approach,” Pascoe noted. “I think we have to be much broader in selling our profession to new immigrants. Landscape Ontario is doing some work with refugee settlement programs, and nationally they lobby the Canadian government so that our industry is on their radar.” 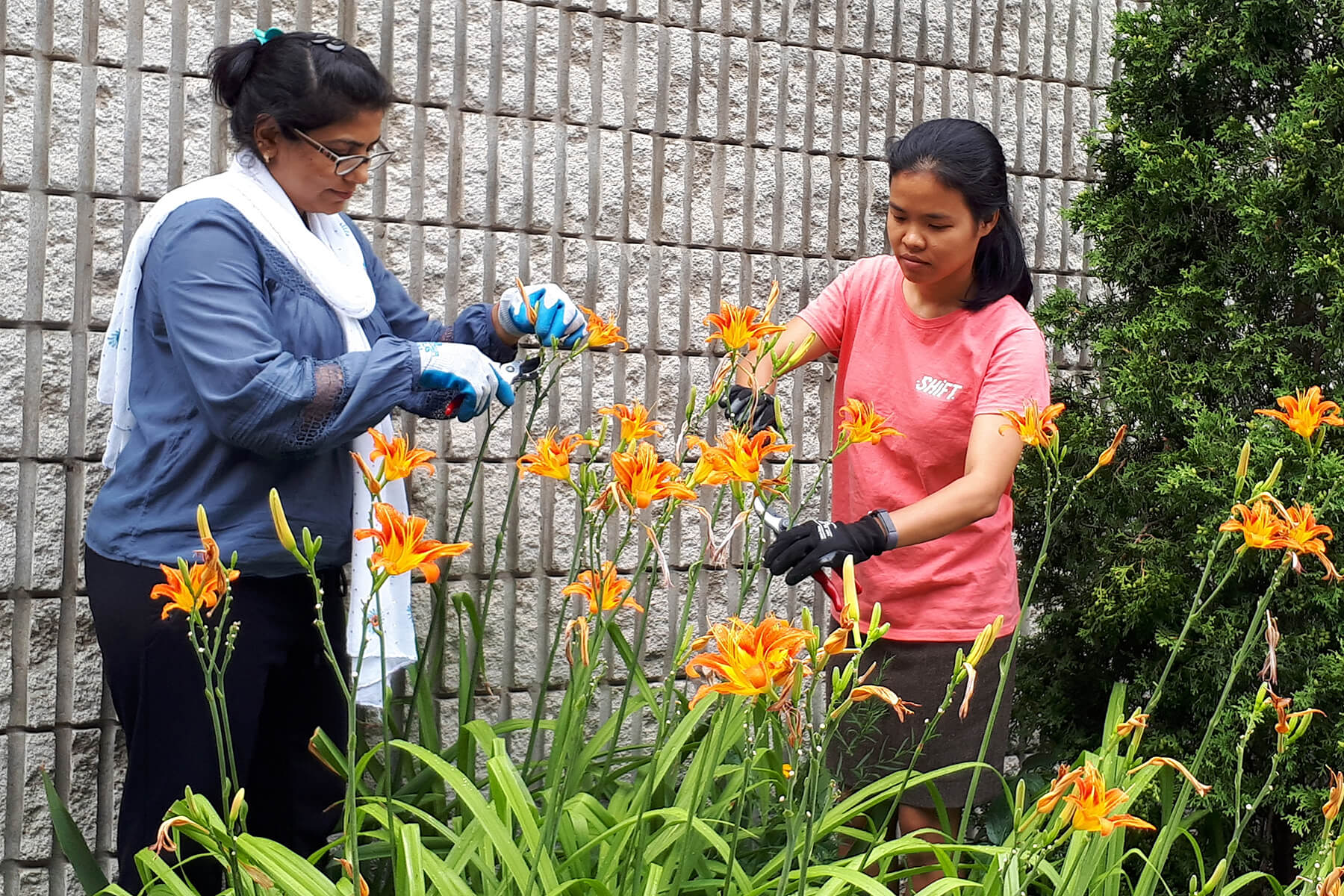 The Horticulture Technician Pre-Apprenticeship Training Program for Women helped both Rabia Ali, who immigrated from Pakistan and Tyra Nguyen, originally from Vietnam. 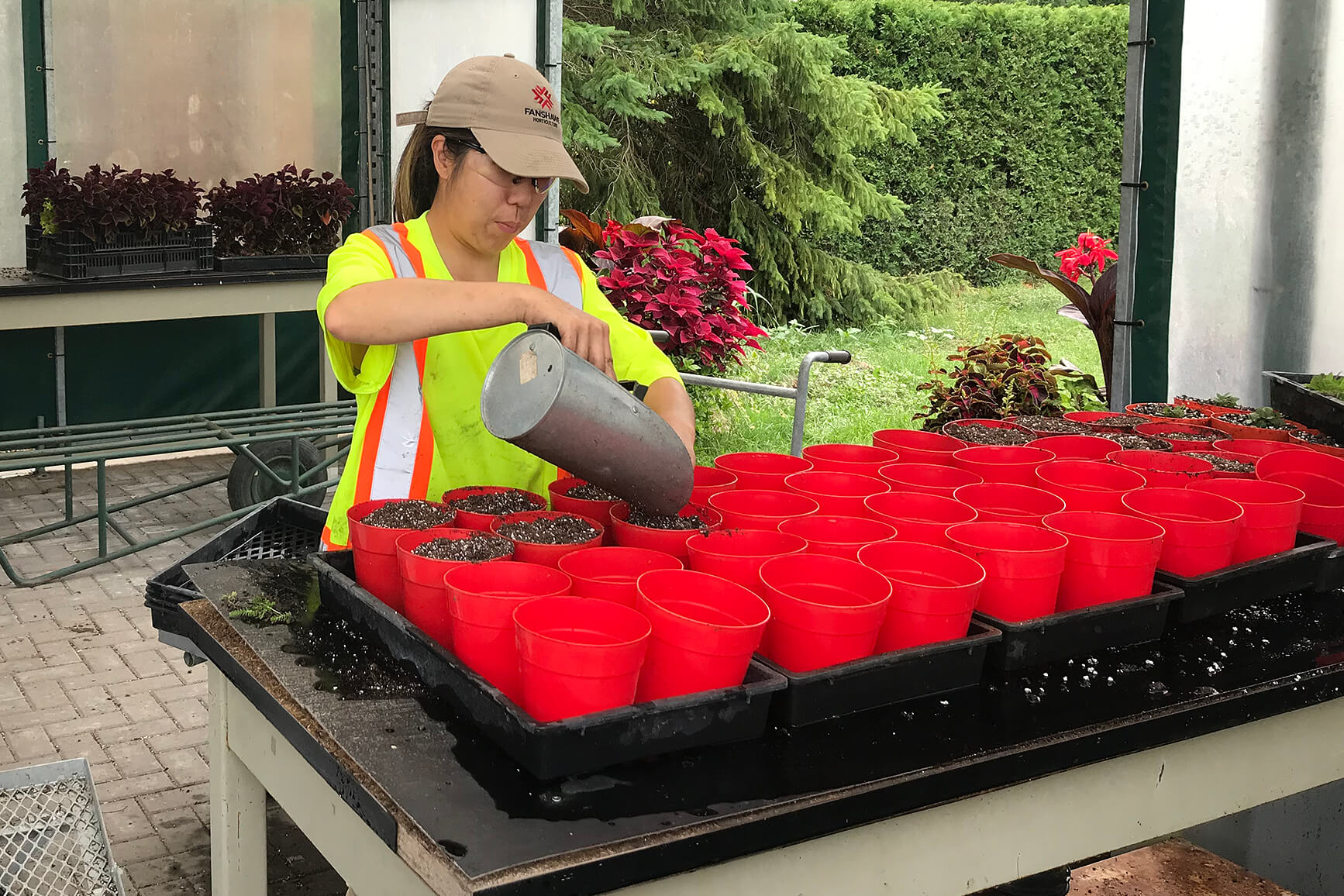 An immigrant from Brazil, Suzy Taeko Mitsuzono is enrolled at Fanshawe College and has a post-graduate degree in genetics.
Employers like Toronto’s Oriole Landscaping and the family-owned Woodhill Garden Centre in Thornhill (where I work part-time) already employ a number of immigrants. At Woodhill, about 80 per cent of the part-time staff are immigrants. Rob Ammaturo, one of Woodhill’s owners explains: “If we’re short-staffed, usually during our peak time in May to July, we just call on one of our repeat staff and say we need one, two or three guys. And they will find them in their community or through friends or relatives. It’s a pretty good system because if we know our employee and trust them, they would try and bring somebody that’s likable and trustable too.”

As with any workforce, employing new Canadians comes with challenges on both sides. Some new immigrants are not fluent in English and the industry often needs more than a mere familiarity with the language. Nguyen conversed with me easily enough in English, but was worried about learning the names of plants that were so different from those in her native country. Rabia Ali, another student in the pre-apprenticeship program, immigrated to Canada from Pakistan last December. She has an master’s degree in horticulture, but is concerned that much of what she learnt back home may be outdated or irrelevant here.

There are also more material concerns. Many immigrants need time to get their driving licence in Canada and this can affect their pay. Julie Poirier, who handles human resources for Oriole, notes, “Having a driving licence gives them the opportunity for longer hours because drivers need to come to the yard first and bring the truck back to the yard at the end of the day.”

Being laid off in the winter is also hard on those looking to establish themselves financially, but some actually find it useful. “Currently I think I want a job that I can work in the summer and in the winter I can take time off, maybe fly back to my country. The money I make will be less, but right now I miss my family more!” says Nguyen.

For those who prefer full-time jobs, many companies now offer year-round employment with tasks like snow removal, or help employees upgrade their skills in the off-season. Jacqueline Silva, an immigrant from Chile, feels it’s important for employees to know they have opportunities for upward mobility. Silva says in her first year at work, she was not even allowed to touch a leaf blower. “In the beginning I noticed that the industry is thinking, ‘Oh they are labour, they have no brain, we can just make them work, work, work and they’re not gonna complain,’” Silva recalls. “But I do have a brain, and I can design and I can decide as well what to do and not to do.” Silva took the issue up with her employer and the response was immediate. She was made a supervisor in her second year, and then a manager. She now works as a manager for a different company, Canadian Landscape Services. 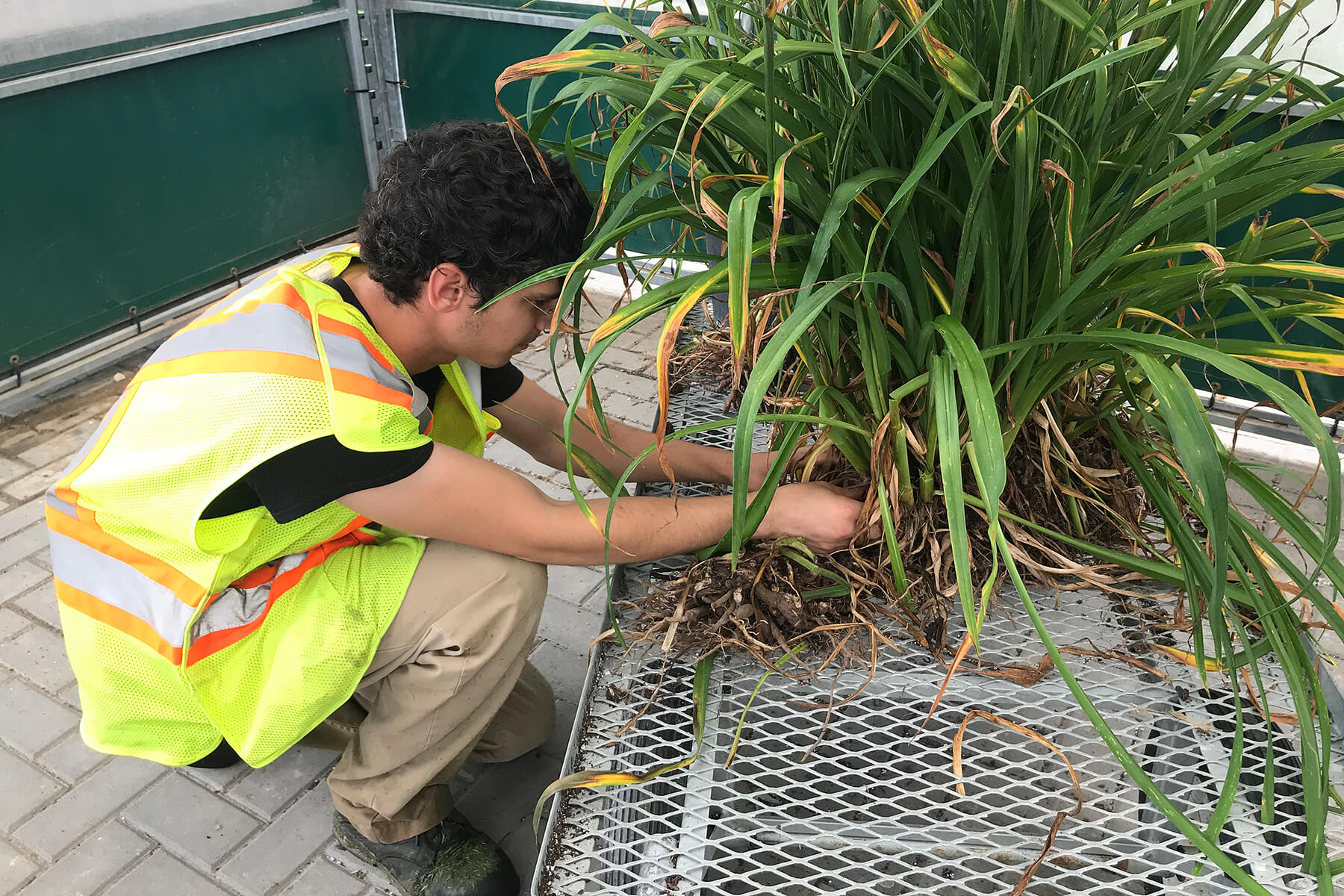 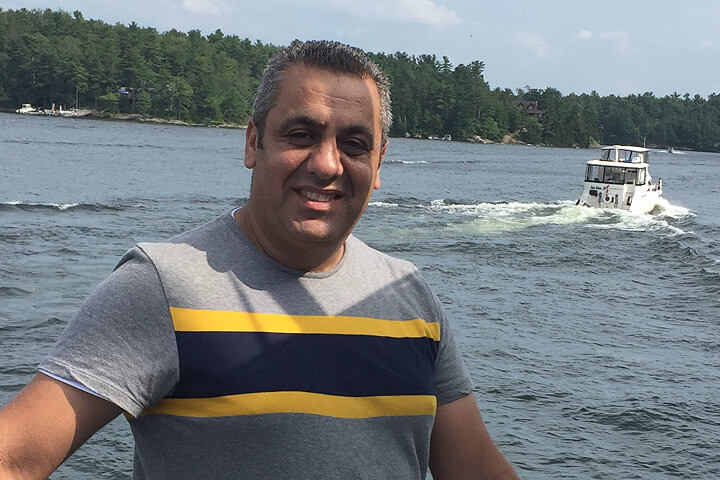 Oriole Landscaping crew leader, Bassem Suleiman came to Canada three years ago as a Syrian refugee.
There are many success stories. At Woodhill, Burmese immigrant Aye Chan was hired just three years ago as an entry-level worker. Ammaturo says Chan soon impressed management with his commitment to work and to learn, and notes he is now a supervisor and the head person in their yard. Syrian refugee Bassem Suleiman, who came to Canada three years ago, is a crew leader at Oriole.

Opportunities to grow go hand-in-hand with pay. “If you expect to have a quality individual, you better be paying,” says Humber’s Zoltek. “This is an industry that I think has shortchanged itself in some regards by not offering their employees better salaries. Maybe it’s not just money. Maybe it’s more of options, more control of certain aspects of the company,” Zoltek adds.

Some employers are on board. Oriole set up a group retirement savings plan for employees this year; it also offers workers overtime pay and help with financial literacy or renting. “And they sometimes aspire for more responsibility which we have given to whoever is capable,” Poirier adds.

Even international students, who form the pipeline of the future workforce, have higher expectations. Omar Abdeen and Suzy Taeko Mitsuzono, from Jordan and Brazil respectively, are enrolled in Fanshawe College’s Horticulture Technician program. Abdeen has a degree in philosophy and has taught English in Uruguay. He is interested in horticultural therapy and says he will look at what the industry can offer. “I travel a lot so I’m still not sure…but if I’m going to stay in Canada, it would have to be with somebody that has a wealth of experience in what I’m looking to specialize in.”

Taeko Mitsuzono has a post-graduate degree in genetics and is interested in working at a nursery or in landscape design. “I don’t like just cutting grass, you know, I want to do something more than that if it’s possible,” she says. “But if not, I cut grass. I just need a job!” she added, with a laugh.

Whether it’s a stronger work ethic or higher education or work experience, new Canadians and potential immigrants have a lot to offer the landscaping profession. It’s up to employers to find ways to optimize these workers’ talents to fill their skills gap and fuel their own growth.
Share
Tweet
Mail