Several years ago, an elderly man was admitted to Homewood Health Centre, a mental health and addiction facility in Guelph, Ont.

Diagnosed with reactive depression following the death of his wife, the former farmer was lonely, had little interest in life and was physically weak from inactivity. With encouragement, however, he attended Homewood’s horticulture program, led by horticultural therapist Mitchell Hewson. Slowly, the man began participating in a range of activities, from plant propagation to vegetable planting. He was soon sharing his experience and skills as a farmer with others.

Eventually, the man left Homewood, but back home he continued gardening. He built raised containers and planters on his balcony to maintain his interest in horticulture. Hewson stayed in touch, and the man told him that gardening gave him another chance to use his skills to care for something and reconnect with life.

“Horticultural therapy helped him rediscover his strengths and abilities, giving him a renewed sense of purpose and hope,” Hewson said.

Hewson has a 50-year career full of stories just like this one. He was likely the first horticultural therapist to practise in Canada, and he leads a popular online horticultural therapy course, so he has witnessed the modality’s evolution up close. Initially, horticultural therapy was mainly used with the elderly and those suffering from mental illness. It still is today, but you can also find people from all walks of life benefitting from horticultural therapy in a wide variety of settings, including health care centres, correctional facilities, farming communities and community gardens.

The Canadian Horticultural Therapy Association distinguishes between two types of plant-based therapy. Horticultural therapy is a goal-oriented and formal practice administered by trained therapists who use plants, horticultural activities and the garden landscape to promote well-being. Therapeutic horticulture, on the other hand, isn’t necessarily goal-oriented, but still uses plants and plant-related activities to promote health and wellness.

Perhaps what ties these different types of therapy together, in all of these different settings, is what Hewson says has made the practice successful: its client-centred approach. In other words, horticultural therapy is often guided and structured by trained professionals, and it encourages people to help themselves.

About 35 km northeast of Sarnia, Ont., on the shores of Lake Huron, sits Kettle and Stony Point First Nation, a community of about 2,000 people. One of the main streets on the reserve is Indian Lane, and if you were to drive down it and take a peek between the health centre, the seniors’ facility and the school, you might spot Ruth Anne Cook among the plants of a bursting community garden.

In 2020, the educator and horticultural therapist was asked to help develop a garden there, and with support from members of the community, she set to work. At first, it was just a three-quarter-acre grassy area, but soon they transformed it into several plots. One area is for white corn, another is for medicinal plants and herbs, and a third has 24 raised boxes filled with vegetables. In the centre of the garden is a six-metre plot resembling a medicine wheel. A wooden arch welcomes visitors, displaying its name: “Well-being Garden.” 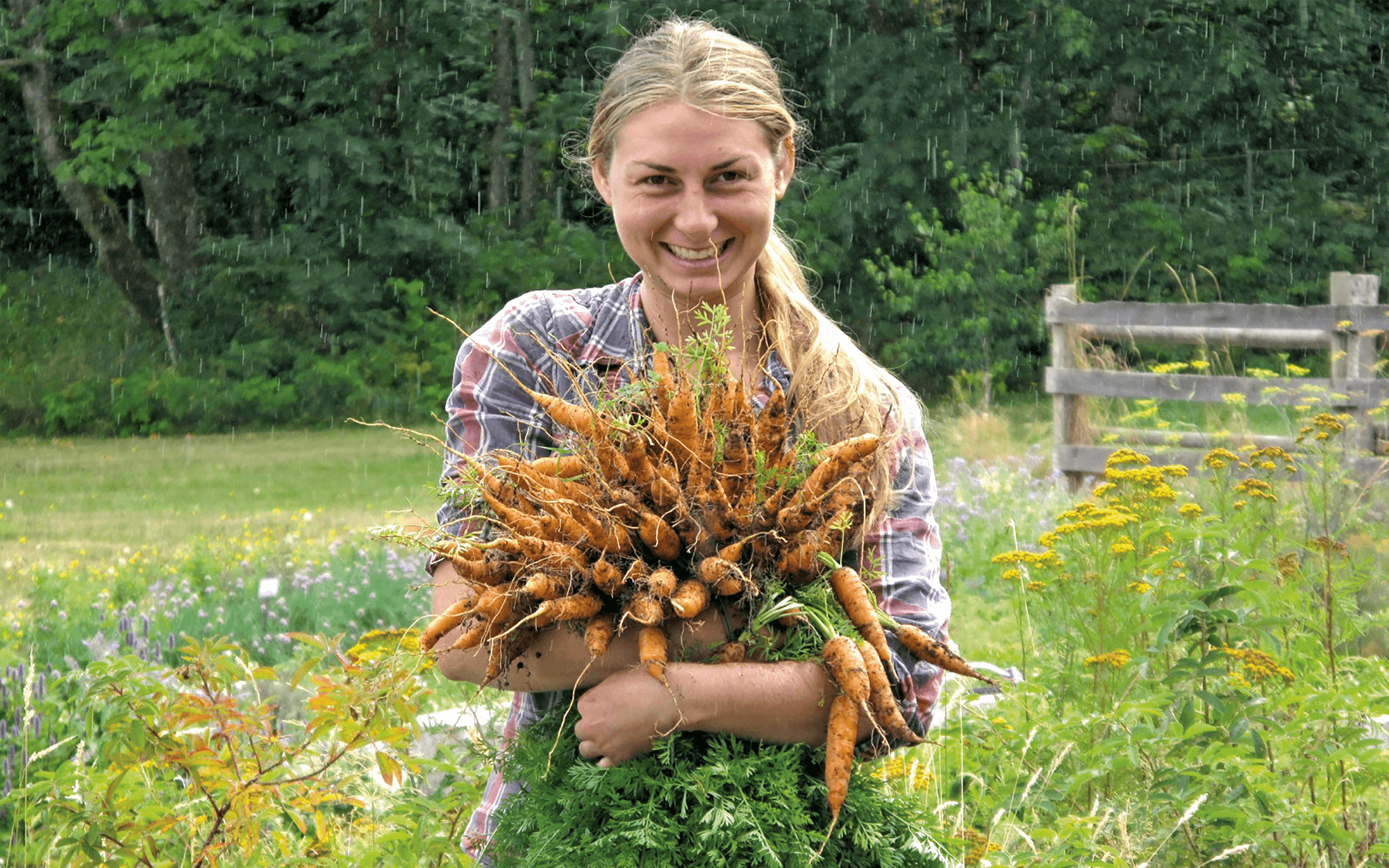 Innisfree Farm in Courtenay, B.C. specializes in medicinal plants and also features a Victory Vegetable Garden. Initially, the Well-being Garden was conceived as a way to help alleviate some of the food insecurity issues in the community, but it soon became more. Elders, for example, would visit to share their history with gardening. Cooking demonstrations were held on Tuesdays. And Cook put her horticultural therapy training to good use — with one man in particular.

This man was homeless, and he began using the garden as a place to sleep. Slowly, Cook got to know him, and found out that he had run away from a residential school as a child and had struggled with mental illness and substance abuse.

“This led to family disconnect; nobody would take him,” Cook said. “He had a whole history of not belonging anywhere.”

For a few weeks, however, he found a place at the Well-being Garden, working there, sharing food and engaging in conversation with Cook. Later, and following Cook’s encouragement, the health centre opened a respite location for people who need a place to live in the community.

“I like to think it was partly through us working with him and having him there that they opened that, but that was one of the good things to come out of this,” Cook said.

Although the pandemic has put a damper on more therapeutic uses of the garden, Cook is hoping to add additional wellness programming for families and others soon. “This all started out as a food security thing, but has developed and morphed into so much more,” Cook said. “It’s been wonderful.”

Like most organizations located in downtown areas, Stella’s Circle doesn’t have much greenspace. The St. John’s, Newfoundland-based non-profit offers housing, training, employment and counselling services to those in need, and as the director of employment services, Rob McLennan explains “our footprint pretty much goes to the sidewalk; not a lot of soil.”

Six years ago, though, about 3,200 square metres of soil was offered to Stella’s Circle by the owner of a downtown condominium. McLennan and others jumped at the opportunity to build a community garden there. Soon, funding was secured and Stella’s Circle had a Green Team of women who had been involved with the criminal justice system developing the land. Today, the plot is filled with fruits and vegetables, annuals and perennials, as well as small greenhouses, trees and other spaces to just enjoy the outdoors.

Stella’s Circle program participant Jeff Dwyer is one of the many people who have benefitted from the garden. “It’s helped me because it’s taught me a lot about staying calm, and not overreacting when things don’t work exactly [right] the first time,” Dwyer told CBC News in 2019 “Instead of just sitting there talking to someone, you actually get to go and do something, and feel better about yourself. You get to express yourself through your gardening.”
McLennan explained there can be social therapeutic benefits as well.

“When people are doing things in their communities, feeling productive, talking to others, they’re building relationships and feeling engaged. And when this is happening outdoors in green spaces, it seems to work all the better,” McLennan said. “So, in the garden, maybe you’re working alongside one of the people who lives in the condominiums and you’re talking about where to best grow tomatoes. Nobody is the expert and the exchange is based on a common purpose and shared experience. The opportunity to be included and to make a contribution that benefits self and others can be huge for people who have experienced all kinds of intersecting oppressions and marginalization.”

Other members of the St. John’s community have used the garden as well, including area schools, the Association for New Canadians and the Assertive Community Treatment Team, which provides community-based treatment to clients with severe and chronic mental illness.

As the garden continues to expand, the hope is that even more community members find it beneficial. “We want it to appeal to everyone,” McLennan said. “You come to the garden and you take from it what you need to. You interact with the garden features as much as you want or as little as you want.”

It was a bold mission, but it made sense for Cabrera, a medical herbalist, and Vrain, a retired soil scientist. And they got to work putting it in motion, eventually planting hundreds of vegetable and medicinal plants; setting up a greenhouse and a nursery; and installing a pond, sculptures and an oyster shell labyrinth. They even have a tea room onsite.

Fifteen years later, Cabrera and Vrain’s mission has taken many forms. While anyone can visit to explore, work on and learn about the property, both formal and informal horticultural therapy happen there too.

Cabrera said informal therapy happens when people visit to just enjoy being outside.

Ruth Anne Cook helped develop a community garden for the Kettle and Stony Point First Nation. “We have a volunteering program, for example, where people come twice a week to work in the gardens for their own pleasure and benefit on a personal level,” Cabrera said. “We have a lot of fun, we serve lunch and do a casual question-and-answer session on one of those days.”

On the more formal side, care attendants visit with individuals from a wide range of health-related organizations to engage in specific activities, such as planting or making art. Cabrera and Vrain may organize some of these activities and even help measure the benefits or progress of these individuals.

About 10 years ago, a non-verbal woman who suffered from  frequent seizures, began visiting regularly. She loved petting the farm’s cats and putting her hands in dirt, Cabrera remembers. “Those activities calmed her down, and she never had a seizure on our property.”

One year, they decided to enter a small planter box that the young woman had grown in a local agricultural fair — and she won. She was thrilled.

“That was incredibly empowering for her,” Cabrera said. “Could I measure that she needed less medication after being here? No. But did she benefit from that experience? Absolutely. In fact, I’m in touch with her mom and she tells me that she still has an interest in the gardens and being outside. So, that was a great success.”

Cabrera and Vrain have more than a decade of stories similar to this one, and the aim is to continue delivering on that mission of connecting people to one source of their well-being.

“It’s not a very hidden secret here,” Cabrera said. “We have a big agenda of getting people back in touch with nature.”