The future of marketing plants on display at Plantarium


The name says it all. Plantarium is all about plants. Now in its 35th year, this European horticultural trade show takes place in Boskoop, longtime hub of Holland’s green industry, at the end of August — just in time to boost fall sales and to kick off a trade show season that encompasses GLEE in the U.K., IPM Essen in Germany and a series of shows in the Czech Republic, Poland, Italy and Russia. In 2017, Plantarium attracted 9,835 garden centre professionals, growers and other trade visitors, primarily from Germany, Belgium and Italy, as well as from more than 40 other countries, including 42 visitors from North America. The public is invited on the last day of the show, increasing the total number of visitors to 15,765.

Many horticultural trade shows exhibit plants, but at Plantarium, plants are more than products. They’re the result of innovative breeding, which is rewarded by an internationally recognized awards program with entries prominently displayed on the show floor. Plants also represent a lifestyle, many of which have been artfully showcased in six Houses of Inspiration, introduced in 2016 and expanded for the 35th anniversary show. And plants have the power to make you think: for 2017, imaginative display gardens were created to get people thinking and talking about the meaning of plants in our society. But in an industry that is continually being challenged, plants need to lead to profits, too. Therefore, since 2015, Plantarium has partnered with Groen-Direkt, a cash and carry (or select and ship) green market that boasts 500 growers, 200 trading companies and 50 suppliers of related goods, all arrayed in a multi-acre greenhouse complex adjacent to the Plantarium building. There’s a lot of commerce happening here.

At Plantarium, the story of plants, from the various perspectives of awards, lifestyle, a thoughtful experience and not least of all, profits, has been respectfully and elegantly told with a consistent look and feel to the overall exhibit space; this high standard lifts the show far above many in North America. Show space presented a unified look using 1,500 wooden pallets cleverly constructed to create structures at the entrance, in hallways, the Novelties showcase area and the Houses of Inspiration. A team of 10 builders, contracted by Plantarium organizers, took two weeks to construct these elements, much of which will be dismantled and re-used at IPM in Essen, Germany. 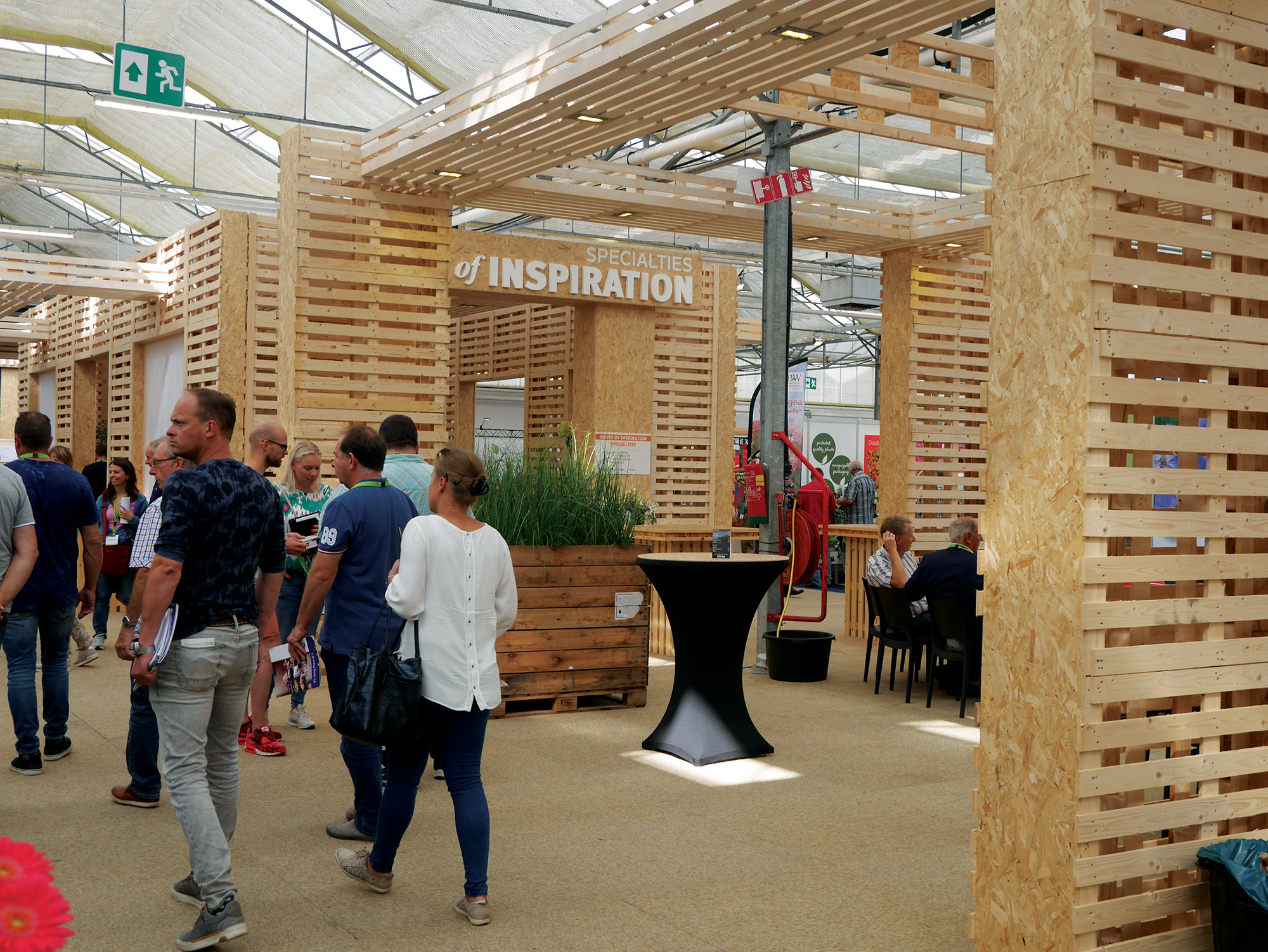 Houses and Gardens of Inspiration carried through the show’s “story” theme.

“What’s new?” is a common question at any trade show, and Plantarium answers it with a program that showcases new plant introductions with an awards program that has recognized some of the best perennials, trees, shrubs and vines of the past decades. Winners include Heuchera ‘Chocolate Ruffles’, Dicentra ‘Burning Hearts’, Chasmanthium latifolium ‘River Mist’, Clematis Princess Kate and this year’s Gold Medal Winner, Hydrangea macrophylla ‘Lady Mata Hari’. A whopping 69 plants were submitted for judging in 2017, and the best of the bunch were prominently and beautifully displayed in the Novelties showcase area. The plants were displayed complete with growing information and the name of the grower/breeder submitting the plant, which must be new to the European market in the last five to six years. Along with the Best Novelty Awards are the Press Awards, which focus on market appeal of plants in two categories: 1. Concepts and 2. Garden, Balcony and Patio Plants. The 27 international journalists who attended the show selected Cercis canadensis ‘Rising Sun’ from Joh Stolwijk & Zn for the top award in Category 2, while FleuraTerrazza climbers, designed for balconies, patios and other small spaces, garnered the Best Concept prize.

Each year, the show establishes a theme. For 2017, the storytelling theme inspired the creation of special displays and gardens while providing enough scope for exhibitors to tell their own stories. Many of the more than 300 exhibitor booths included lifestyle displays that incorporated décor to show how plants can enhance and complement our homes. Other exhibitors created displays of insect hotels, beehives and honeycombs to tell the story of pollinator-friendly plants.

Yet others paid a premium for one of the six Houses of Inspiration, which provided ideas for displaying plants at retail — an important component for the 27 per cent of visitors who attended the show representing the garden centre and retail sector. De Jong Plant BV worked with celebrity stylist Romeo Sommers to create a striking display house featuring the Magical brand of hydrangeas, complemented by products from 19 other green industry exhibitors. In planning the display house, De Jong engaged Sommers to develop and strengthen the brand with a series of hydrangea-themed products that included everything from umbrellas, gloves and trowels to a special tea made from the leaves of Hydrangea serrata. 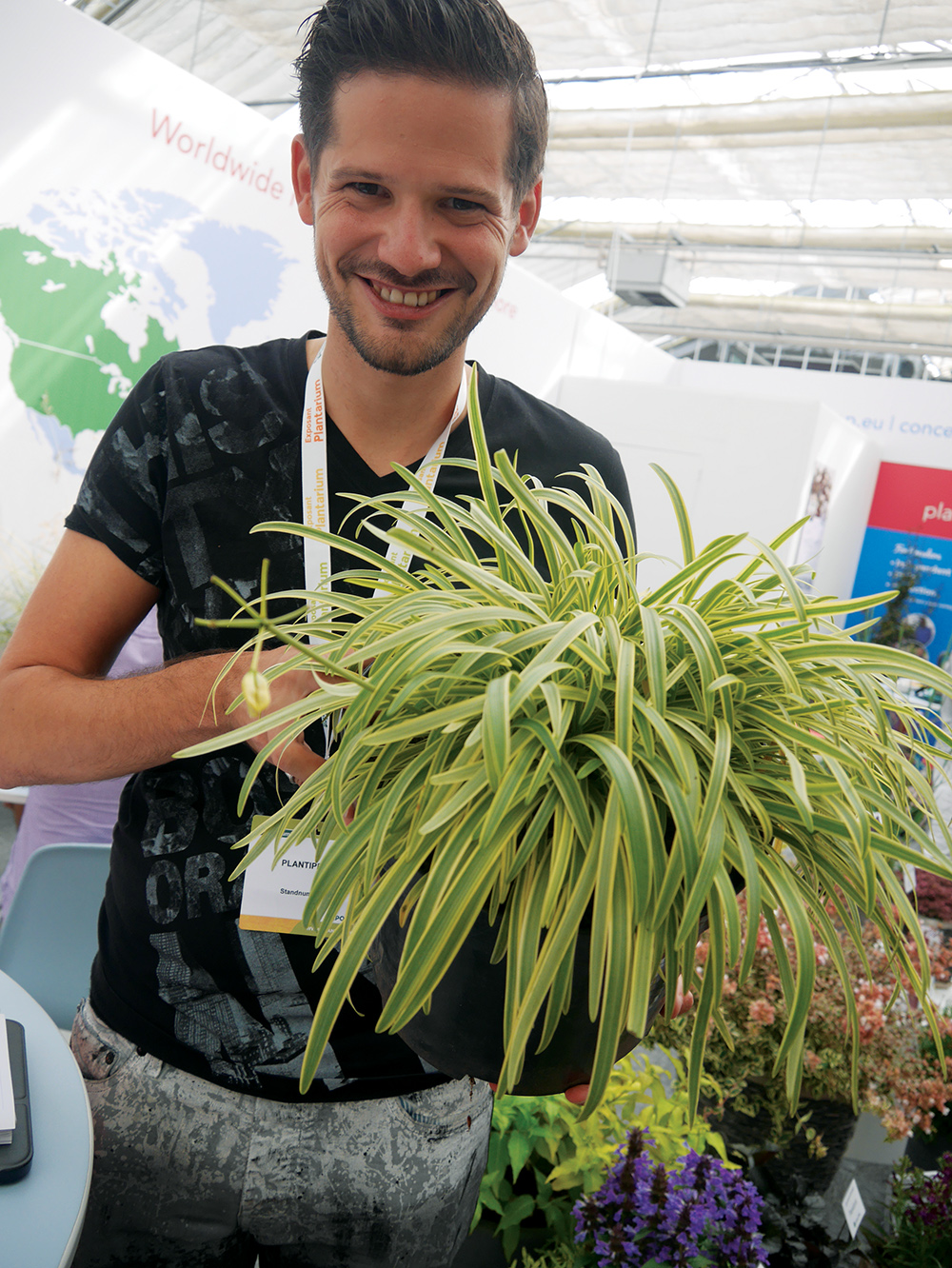 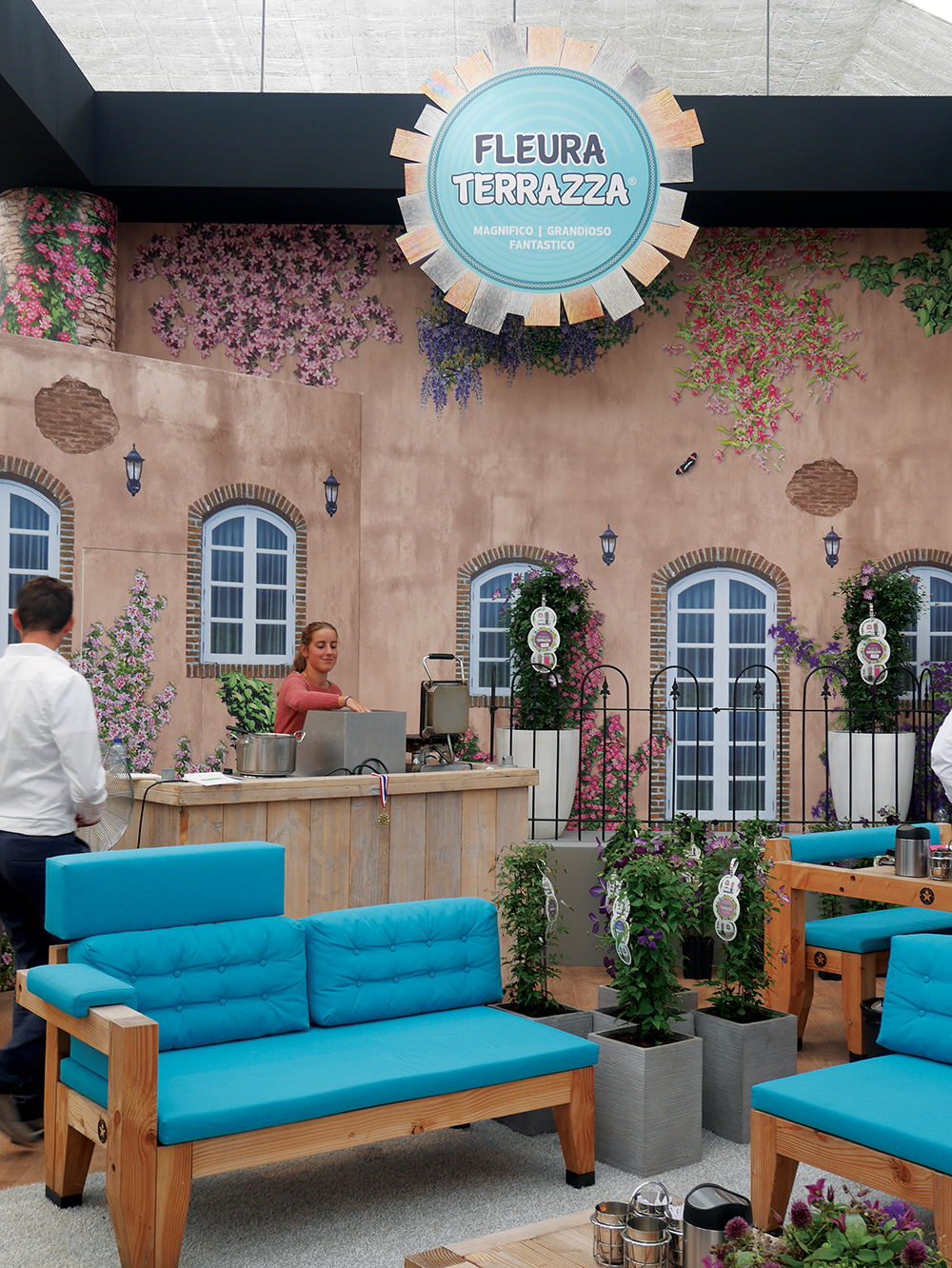 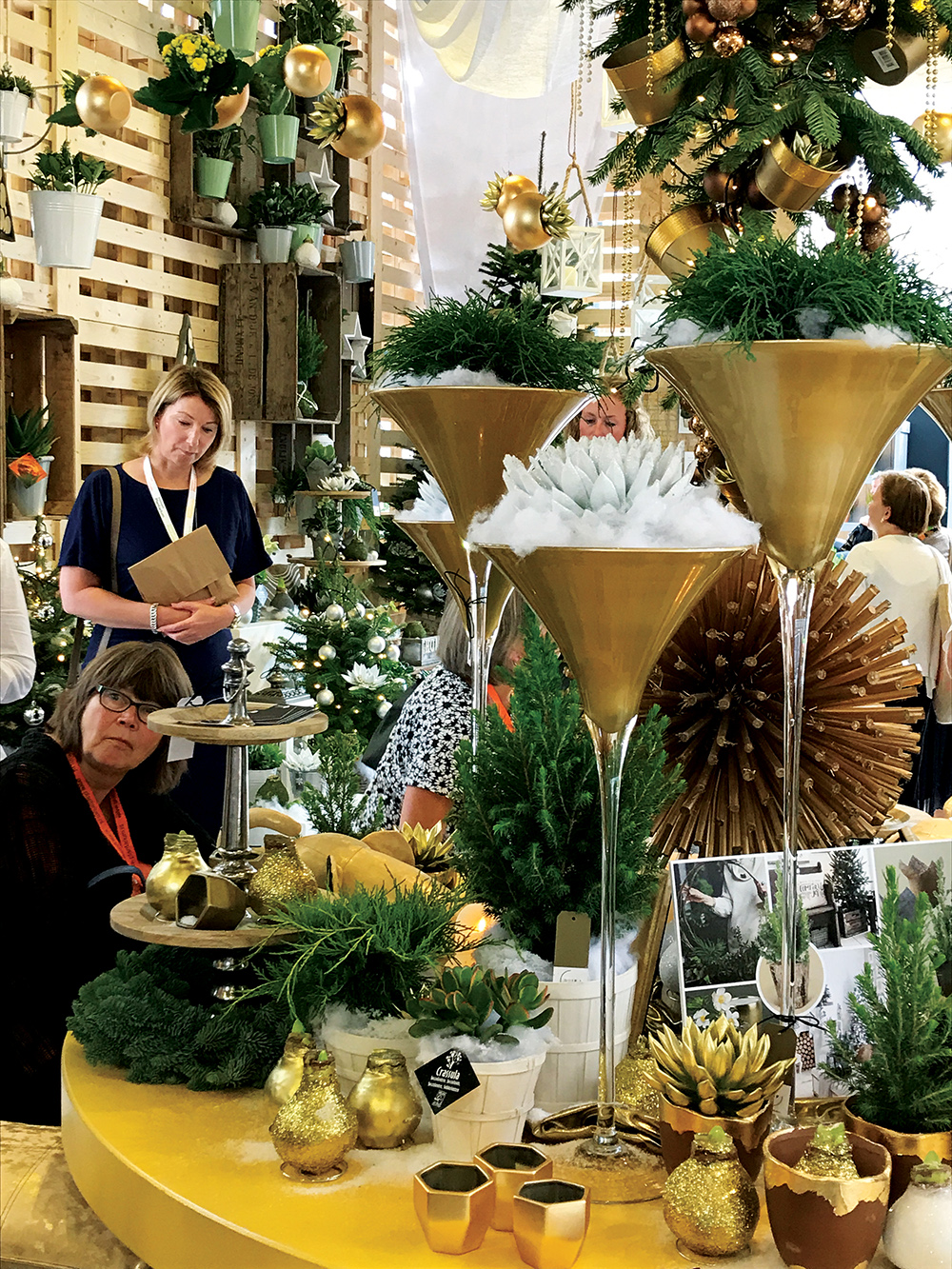 The Houses of Inspiration presented themed display ideas for retailers.
Several other Houses of Inspiration were cooperative efforts, too. Décor supplier Duif International worked with six growers, and floral designer and stylist Judith de Frankrijker, to create the award-winning Theatre of Concepts House of Inspiration. De Frankrijker worked with a team that grew from two on the Friday before the show opened, to eight as Wednesday’s opening approached. Displays were grouped into four themes, and featured Duif’s glassware line combined with everything from orchids and water plants to veggies and snow-sprayed amaryllis.

As novel an idea as the Houses of Inspiration proved to be, the show also featured eight themed gardens based on notable people, from Mozart and Salvador Dali to Anne Frank and Nelson Mandela. Garden designers from the Ontwerpinstitut were challenged by Plantarium organizers to create these thought-provoking gardens.

“Everyone has a story, and that’s what we tried to tell through these gardens,” explained designer Angela Warmerdam. Using plant material donated by growers, the design team started working on-site two weeks before the show opened. Although reaction to the gardens was mixed, Warmerdam said, “People don’t always get it. But once they do, it makes you think.”

Notwithstanding that attendance at Plantarium has been dwindling from a peak of 24,000 visitors in 1992, the takeaways from Plantarium for other trade show organizers, exhibitors, visitors and communicators add up to what show organizer Jos van Lint describes as the goal of Plantarium: “It’s all about inspiration, experience and innovation.”  For an industry that continues to face the challenges of capturing the attention (and buying power) of a youthful consumer; increasingly competitive pricing; succession planning for an aging management team; and myriad other constraints and limitations, Plantarium’s answer is not to lessen its commitment to the industry by downsizing show space and scope. Instead, it constantly finds new ways to build on its ability to inspire industry innovation through such experiences as the Houses and Gardens of Inspiration, by forging partnerships such as Groen-Markt, establishing the highest levels of presentation for show space and exhibitor booths and encouraging plant breeding innovation through a recognized awards program. Visitors to Plantarium can’t help but leave the show energized by new ideas and optimism for the coming season.

Plantarium 2018 takes place August 22 to 25 at the International Trade Centre in Boskoop-Hazerswoude, Netherlands. Be there for the plants, the experience, and for fresh ideas that will help you grow your business.