So much work has been done since the invasive emerald ash borer’s (EAB) 2002 discovery in Ontario. Now we have, “Made in Canada,” the first release of Canadian-reared parasitoids. It’s not a silver bullet, but it is another creative way for ash and EAB to coexist.

“It would be more exciting if they flew up in a cloud around our faces,” said lead researcher Krista Ryall, as she twisted a wire holding a small ash stick around a nail on an infested ash tree, “But it isn’t like that.”

The stick has wasp larvae embedded under the bark, Tetrastichus planipennisi, a tiny, bit of an insect. Under a magnifying glass, the adult T. planipennisi has the standard wasp wing formation, with six yellow legs and big buggy, almost creepy eyes. The bottle I hold up to a light contains the result of thousands and tens of thousands of international research dollars. It’s not magic or a genie, it is hope. The adult’s wings shimmer and shine more than the finest silk as they flit about.

The species T. planipennisi is one of four parasitic wasps discovered by teams of U.S. researchers in China during the last decade. Before their search, even Chinese forest researchers didn’t know the wasp existed, even though they were using North American ash in forestry and knew our ash trees would die when EAB reached outbreak levels. 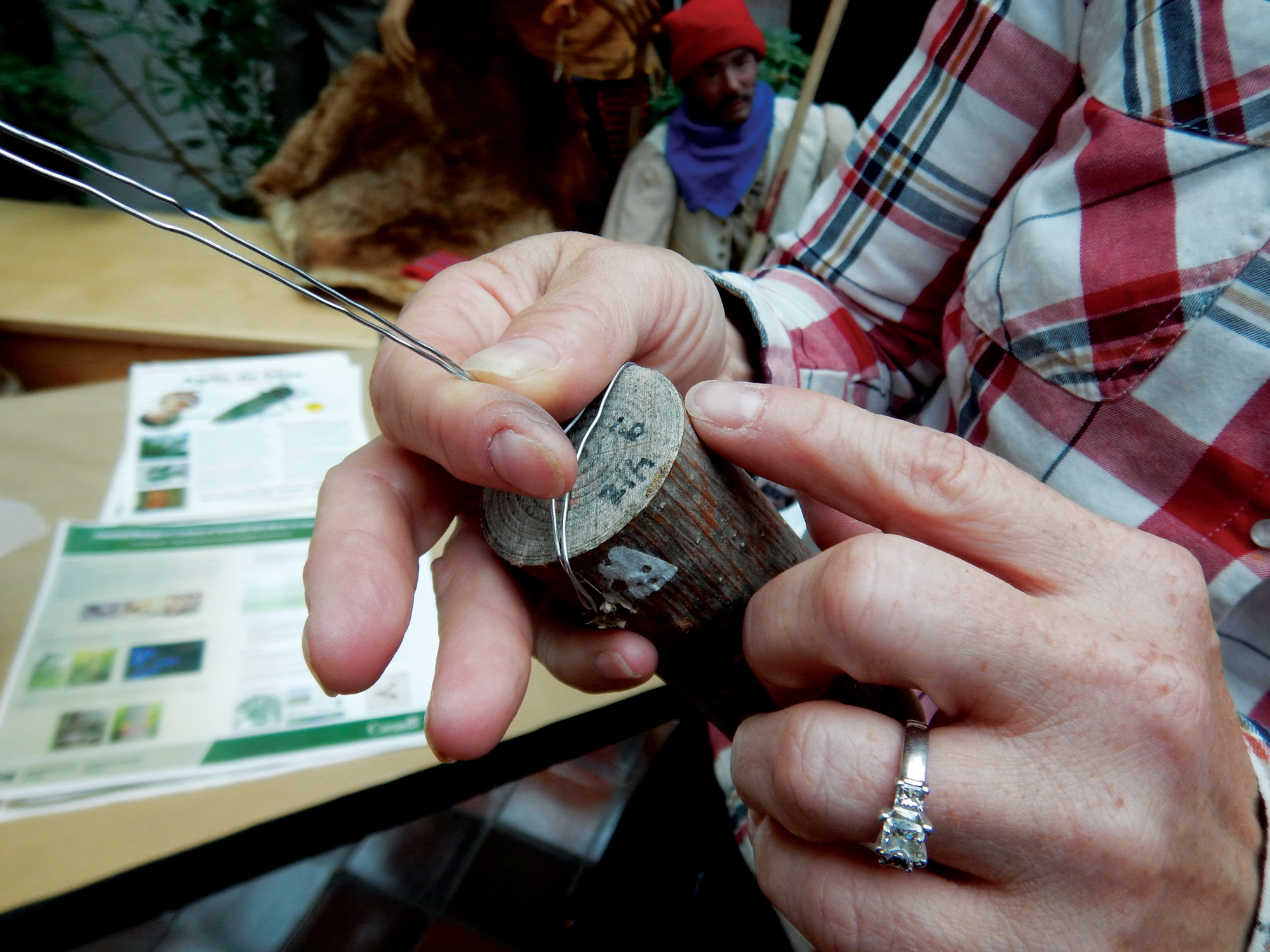 The entrance wounds in the ash stick containing Tetrastichus planipennisi are invisible to the human eye. 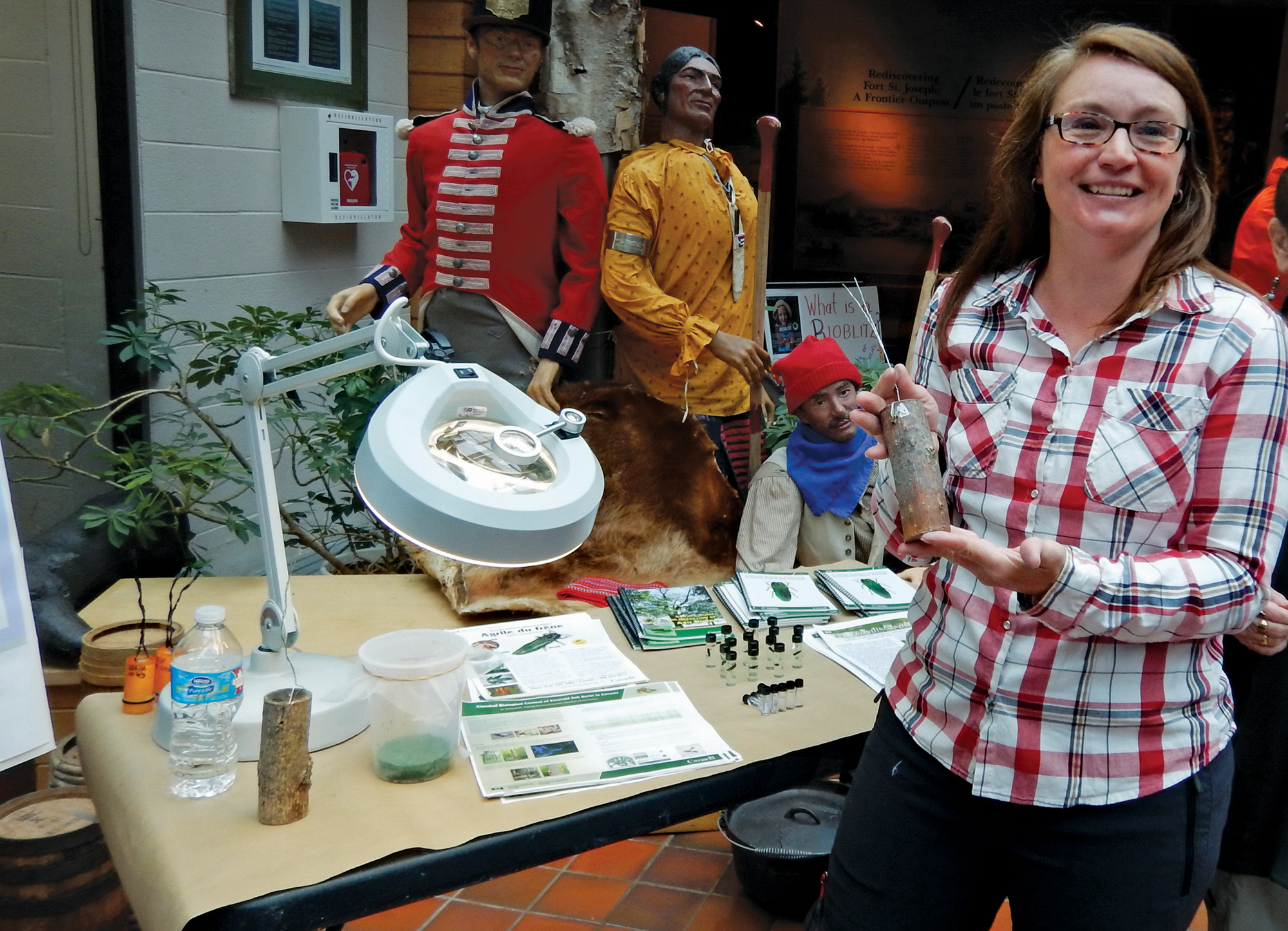 Crystal Ryall holds up an ash stick impregnated with Tetrastichus planipennisi larvae, the first, (and not to be the last) Canadian-reared parasitoid to be released for control of EAB.
Here in North America, extensive testing with long periods of public consultation was done on all four wasps. With high expectations for the successful introduction of these insects, a rearing laboratory was constructed and brought to full production in Michigan. Now a laboratory in Sault Ste. Marie, Ont. is successfully rearing the parasitoids.

Canada has released U.S.-reared T. planipennisi at 12 sites over four years, and O. agrilli, an egg parasitoid, at nine sites over two years. The site on Ste. Joseph Island, Algoma, is the first release for the Canadian-reared parasitoid T. planipennisi. It’s a speck compared to the masses being released over the border.

Ryall said, “This is a pilot project. We don’t know if or how it will work, or what impact the parasitoids will have on EAB populations. The objective is to release wasps to create self-sustaining populations.” It is not possible to produce “enough” wasps to try to “control” EAB in the short term.

Ryall continued, “This is a very complicated biological system; these parasitoids are extremely difficult and time-consuming to rear. Canadian Forest Service (CFS) has dedicated a significant portion of its research budget to this project. There are always competing priorities for funding. To expand, we would require a considerable input of resources (staff, space, equipment).”

There are holes in the parasitoid programs. The four different wasps don’t cover EAB’s climate range, and the ovipositors on the species being released are short. There is concern there will be no bio control protection for mature ash with its thicker bark.

In 2009, U.S. researchers discovered what came to be called “lingering ash.” Of the trees that continued to thrive, researchers now have controlled crosses with Manchurian ash, and lingering ash x lingering ash. Seed was produced; it sprouted and the first early results are in.

USDA has seedlings with more, equivalent and less resistance then the parent trees. The genetic mapping is being done. There is high expectation a North American ash with resistance to EAB will be available to horticulture within the decade, and ash with increased genetic variance for forestry soon after.

Jennifer Koch of the U.S. Department of Agriculture said, “It’s a myth that tree breeding is always long-term. We have learned from both the chestnut and the elm programs.”

A native, soil-borne fungus that can kill EAB was discarded as an EAB control option for now, as a safe method of dissemination has not been discovered. Blue ash seems to be less desired by EAB over other types of ash, but once the others are gone, blue ash is also succumbing to EAB. Used according to manufacturer’s instructions, both Imidacloprid and TreeAzin work to protect high-value trees. Imidacloprid does have pollinator issues and must be used correctly and only when necessary.

Another idea is to wound bait trees, to attract EAB egg laying. Healthy ash around the perimeter of the bait trees are treated with insecticides. The bait trees are cut and chipped in the winter, stopping egg hatching. The program allows land owners to make the transition gradually while maintaining forest integrity.

Many of the researchers working on the EAB situation in the U.S. live in areas that were hard hit initially. The loss of ash is personal to them, and they’ve become highly creative with concepts that aren’t in the literature, as they work toward long-term solutions.

One researcher, watching EAB approach her own street, filled a wagon with diverse saplings and went door to door discussing the issue with her neighbours and distributing the seedlings. While some of the seedlings were never planted, others are now shade trees.

Another researcher decided he couldn’t afford to treat all the ash on his property with insecticides. He treated the best and healthiest according to manufacturer’s directions and they continue to provide shade around his home. The lower-value ash were felled before they became heavily infested, to avoid the challenges of dropping danger trees, and then milled and constructed into a dining room table. His spouse is happy.

Another attempt to protect a researcher’s own community is being done after hours. The researcher enters community property and cuts down small dying ash before the root dies. As the sprouts appear, they are pruned to a central leader. Of course, they are reinfested and must be cut again, but the researcher’s goal of maintaining ash as an ecologically important species is being accomplished.

Another program planted non-susceptible saplings under the canopy of urban street ash. The saplings were able to establish before it was necessary to cut the ash. There were and are challenges with dropping the ash without damaging the saplings.
Living with EAB is a challenge, but creative solutions are being developed.
Pat Kerr is an Ontario-based freelance writer.