A massive stone bridge connects the driveway to the home across the two ponds.

Share
Tweet
Mail
David Kampen has come a long way from his days when he entered the landscape trade at age 13.

If you were among the 600 in attendance on Jan. 8 at this year’s Award of Excellence ceremony during Congress, when his company Edengrove Landscaping of Mississauga was presented the Dunington-Grubb Award, then you saw firsthand just how far Kampen has come on that journey.

The award goes to the most outstanding and highest overall scoring project in the construction categories.

“I didn’t grow up in a family involved in horticulture or landscaping, but I always wanted to work outside,” says Kampen. When he first pursued his quest to work outside, he named his company David’s Student Landscaping. That soon changed, about 23 years ago, when the name of the company became Edengrove Landscapes.

Crews began work on the 25 acre site by excavating two large ponds. Since then, the company has grown to where it presently employs 50 people; 25 of them full-time. With an office in Mississauga, Edengrove has its yard in Burlington. Kampen has been a member of Landscape Ontario since 1991.

Kampen says one of the keys to his company’s success began several years ago when he developed the philosophy of limiting the number of clients he would provide service for at one time. “I believe in developing relationships with a select number of clients each year. We’re not about volume or numbers. We live up to our promises, and always consider the long-term.”

He points out that the project chosen as the winner of this year’s Dunington-Grubb Award is a perfect example of how this philosophy results in success. “The client on this project was fantastic and very involved. We began with an empty 25-acre canvas, with him providing both his passion for the project and some fantastic ideas that we incorporated into the design.” 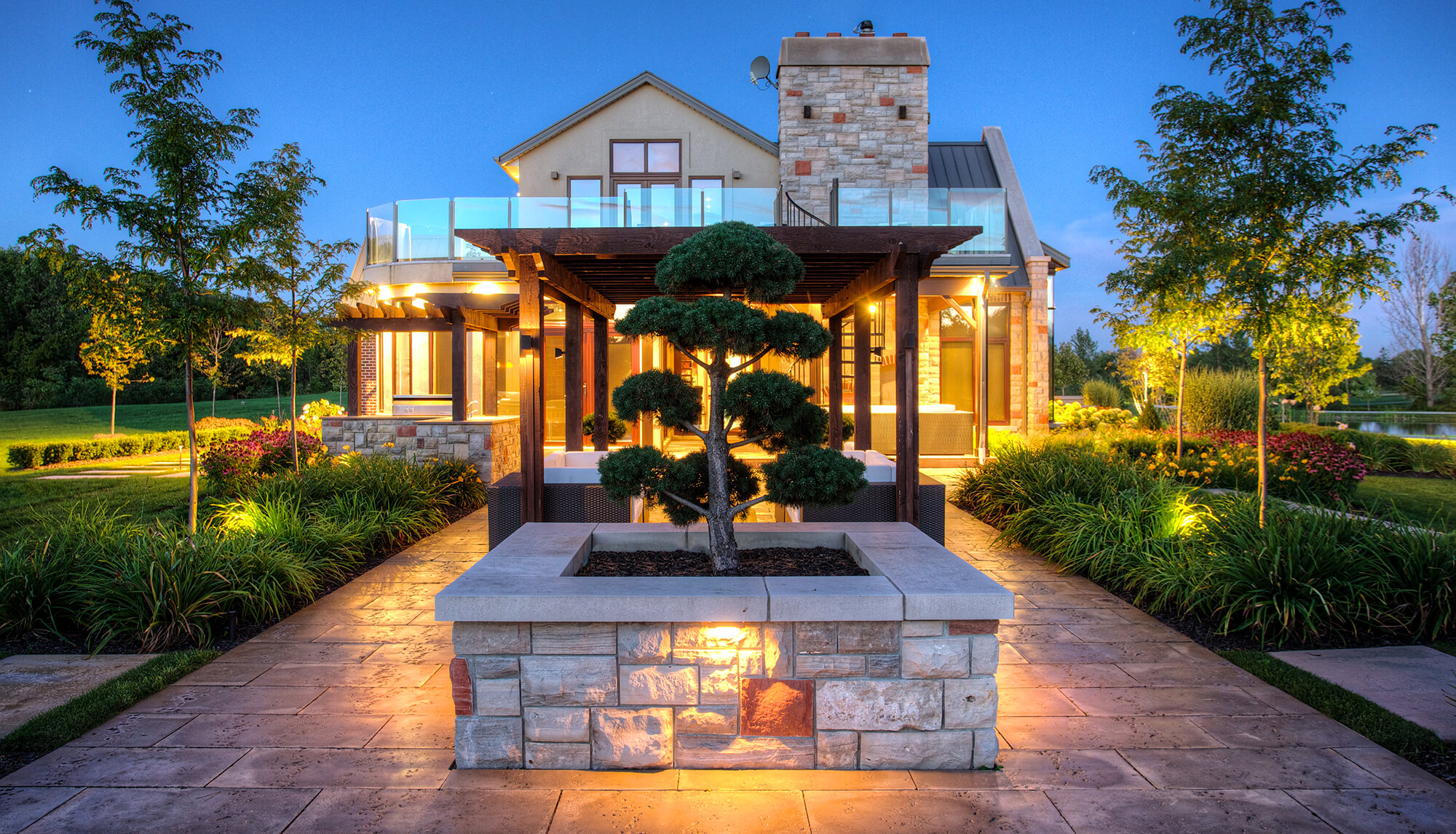 The back of the home is filled with hardscape features and and illumination, which is all softened by massive plantings. Edengrove began excavating the property in December of 2010, dredging and digging the areas for two large ponds. The material that came out of the ponds was used to elevate the driveway and property around it. “We were very fortunate to run into blue clay, which makes a perfect lining and base for ponds and roads,” says Kampen. As well, when the excavation crews reached a depth of 14 feet, they hit natural springs which now assist in providing the ponds with an excellent supply of water right through the driest of conditions.

Both good luck and great design helped in the next phase of the project. A large concrete bridge was required between the the ponds to connect the driveway to the house. To create the bridge, a 16 foot earthen dam was built to hold back the water, with two large pump generators to move the water out of the construction area. “Just after we completed the bridge, a huge spring rainstorm hit that night causing the dam to collapse. It turned out perfect, as the water washed away the dam and the bridge remained completed and in place.”

No luck was needed for the project to win the prestigious Dunington-Grubb Award. One of the judges commented, “Finished landscape integrates beautifully into overall design style and materials with house.” Another stated, “Takes advantage of exceptional views,” and, “Exterior paving design reflected into the outdoors — integrated the interior and exterior living spaces.” 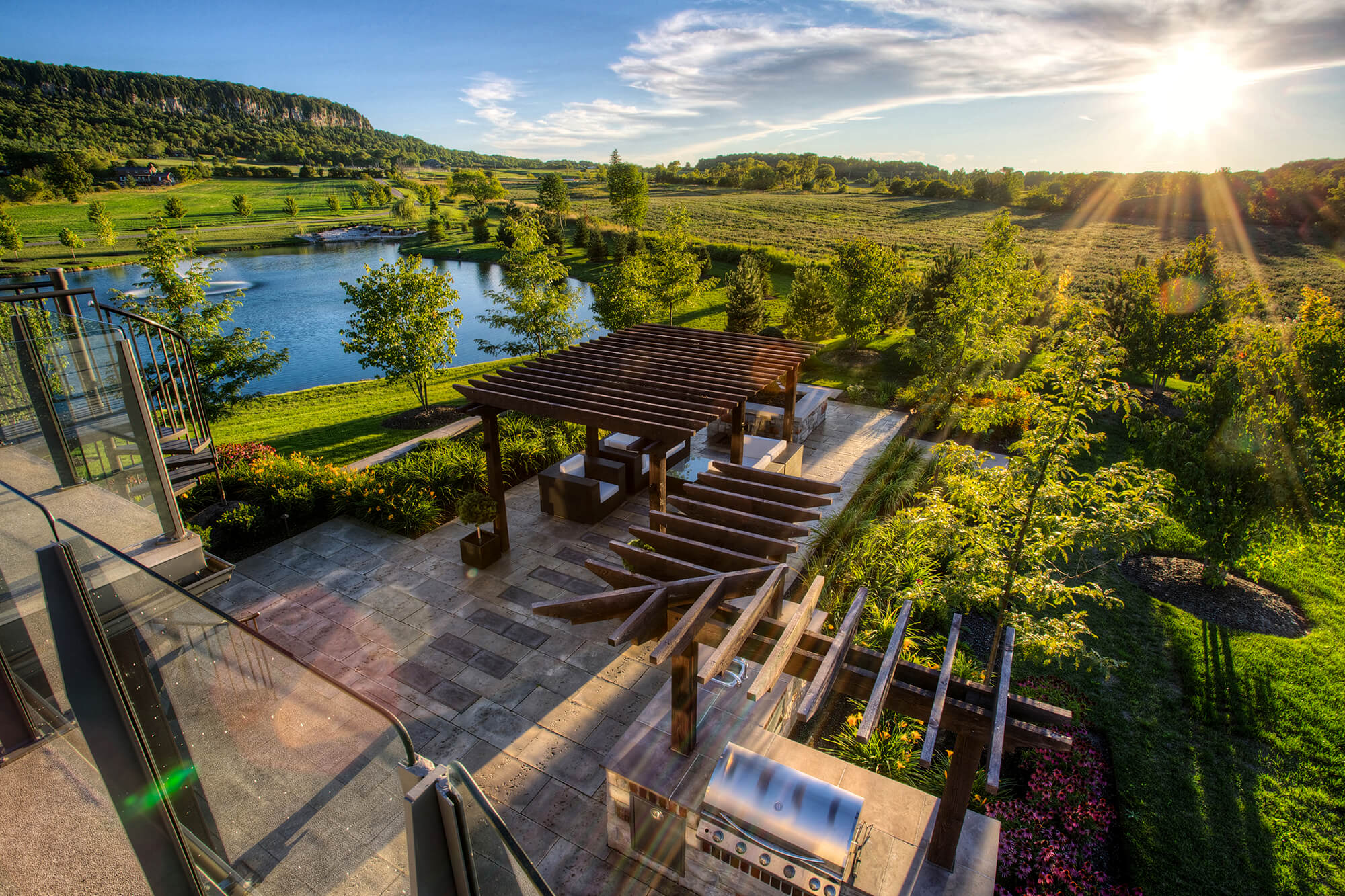 The large deck area continues an interior pattern outside, while presenting a magnificent view of the escarpment. David Kampen credits his team members for the company’s success. “God has blessed Edengrove with hardworking and passionate employees and dedicated supervisors. It’s a big advantage for Edengrove to do everything in-house with no subcontractors.” It’s part of the reason Edengrove is booked right through the 2013 season. Even more remarkable, Kampen doesn’t advertise, with his only marketing through referrals and a website.

These days, David Kampen is mostly kept busy indoors designing projects. He still manages to schedule time on the job outside, where he still loves to see the crews creating and maintaining the outdoor living environments that have been designed on paper. Of course, these days, he has more than a bicycle and wheelbarrow at his disposal.
Share
Tweet
Mail