In the fall of 1999, Christine Moffit was at a crossroads. She was 23, had just been laid off by a landscaping company for the winter, and was ready for a change. “Honestly, I was bored stiff, and knew I had to do something different,” she remembers.

So, she made a list of pros and cons for a few different options, including going back to school, travelling Europe, and starting her own landscaping business in Toronto. The last option got the most pros, and so she went with it, launching Christine’s Touch Gardening in the spring of 2000 with her then-girlfriend Janet Mott.

Janet, who now leads the company’s planting division, agrees. “I had no idea when I was younger that I would be the owner of a gardening company when I grew up. And a lot of times I still joke around and say, ‘I don’t know what I want to be when I grow up.’ But I just keep doing this because I love it.”

Both are quick to point out, however, how extremely grateful they are to be succeeding in a profession that they love, and Christine says that it’s been a pleasure to be part of a shifting culture in landscaping that now expects women to be ready and willing to work and lead across the industry.

And succeed and lead they have. What started as a business out of Christine and Janet’s home, has grown gradually over the years into one that provides garden maintenance and planting installation to high-end residential properties in the Forest Hill, Rosedale, The Beaches, and Lawrence Park areas of Toronto. They now have 15 to 20 employees in the spring and summer, and four year-round.

This isn’t to say it’s been easy getting to this point, though, and both say that finding the right work-life balance has probably been their biggest challenge over the years.

“I think that’s a common story with many people in this type of work,” says Christine. “Any time you’re dealing with a trade where the technician becomes the owner, you get kind of consumed with the work, and during those early years we were working like crazy all the time. We had no life.”

Children changed all of that, however. Though the two ended their personal relationship, they both later had kids.

“That forced us to modify things, because we just couldn’t work all the time anymore,” says Janet. “So part of that was believing in our team members and managers, and not micro-managing but giving them the opportunity to lead and complete work and put some authority in others’ hands.”

Still, it’s been a challenge finding the right people to take those reins, adds Janet. In fact, finding crew leaders and managers has always been one of their biggest weak spots, she says. Patience has been key.

“I think it comes down to us being good leaders ourselves and coaching people,” says Janet. “People take time to develop, and in our experience they learn along the way. There are so many variables with what we do, so finding people that have all of those skills maybe isn’t really realistic right from the beginning.” 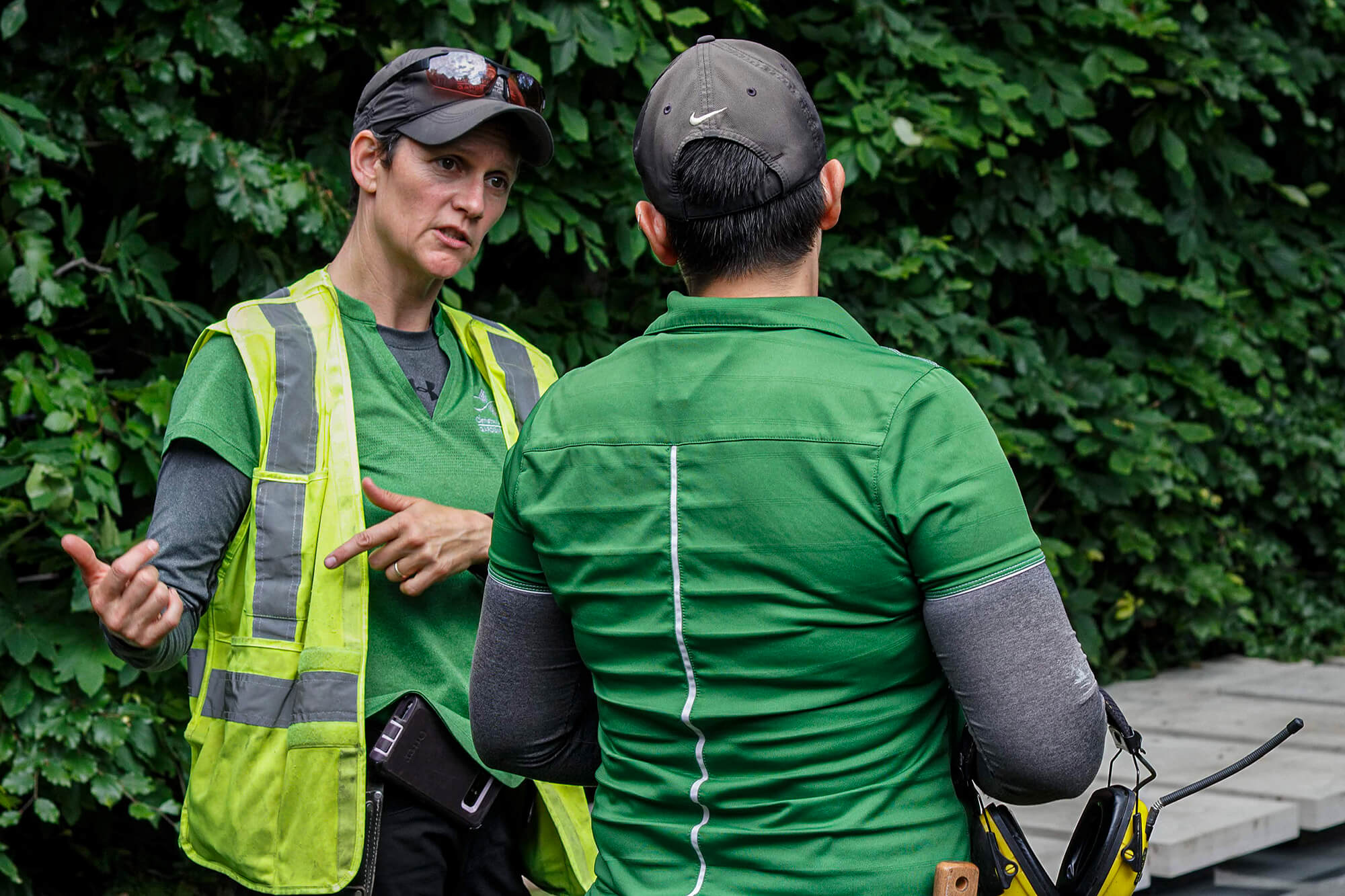 Being a good leader and coach is just one of Christine Moffit’s roles as a business owner. Both agree that their Landscape Ontario involvement has also been huge in working through hurdles like these. Janet has been on the Toronto Chapter board for seven years, and both are part of the association’s Peer to Peer Network, which is a peer mentorship and learning program where owners and upper managers meet in person and digitally to share and learn from each other. They also regularly send employees to the association’s seminars in the winter.

Christine points to the period between 2005 and 2008 when the company’s Landscape Ontario participation was particularly important. “That was really crunch time for us, when we were really realizing that okay, we’re getting big enough and we need to put systems in place, we need to professionalize ourselves, and we don’t know how to do it. And the resources [Landscape Ontario] had were amazing.”

That was also around the time that Christine and Janet broke up, and while in many cases that means the end of the business relationship, that wasn’t the case here.

“That was certainly a challenge,” says Janet, “but we just work really well together as business partners. I’ve been known as a machine and have very high expectations, whereas Christine is a better coach, is maybe more compassionate. But we also have a lot of similarities and a similar vision for the company, so it works. And you can see that in this second decade of working together.”

As for the next decade, Christine says she’s looking forward to building on what they’ve learned over the past 20 years and continuing to let other team members lead.

“Over the past few years, I’ve gotten over a hump where things are kind of running themselves in this — to be cliché — Christine’s touch sort of way. And it feels really good. I feel so fortunate and incredibly grateful to have stumbled into this type of work.”