If you ever fly in or out of British Columbia’s Victoria International Airport, take a look out the terminal’s windows and you might spot a roving team of zig-zagging lawnmowers with one important missing element: people behind them. In 2018, the airport, in partnership with Victoria’s IslandEarth Landscape Services, introduced its first robotic mower, aka Moe, a Husqvarna machine that uses guidewires and a GPS system to define the work area, register completed areas, and adjust its cut pattern. Built-in sensors detect objects in its way, and when it’s time to recharge, Moe heads back to its docking station.

Since then, IslandEarth has added three more Moes to the airport, and will likely add five more this spring. That’s on top of the handful of these Roomba-like machines they already have on commercial and residential properties in the Victoria area. The company’s operations manager, Dean Ross, says the goal is to have about 50 within the next three years. “I think it’s a really good business opportunity, and it’s the way it’s going to be 10 years from now. A couple of years ago, there wasn’t much talk of robotic mowers, and now you see the pendulum swinging.”

The proliferation of robotic mowers really started in Western Europe over a dozen years ago and began creeping into the North American market about five years ago. Globally, the market is expected to hit $2.69 billion by 2024, growing at a compound annual growth rate of almost 14.69 per cent between now and 2024, according to market research firm Arizton. In Canada, the market is still in its infancy, but there are an increasing number of homeowners and landscape companies using these man-free machines from Victoria to St. John’s. Weed Man has even started its own robotic lawnmower division, called TurfBot, with two locations in the U.S. and one in Toronto. 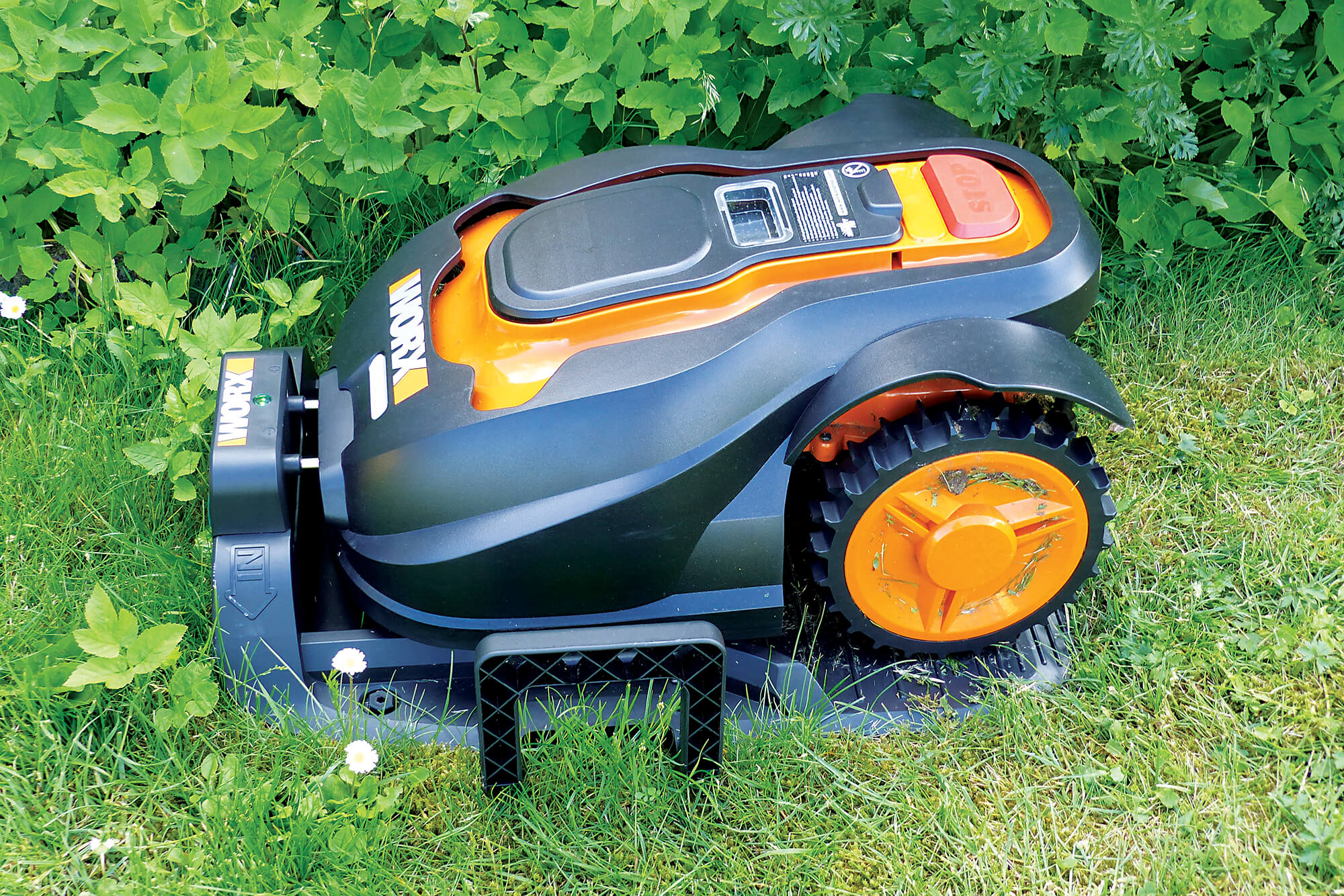 Robotic mowers dock themselves when recharging is required. The pros
Martin Stokowski is operations manager of the Toronto TurfBot location, and says the biggest upside of the 50-plus mowers they’ve put on residential lawns is how they mow. “They’re fully adjustable in terms of what length you want, so you can make sure you’re not stressing out the lawn by letting it grow out and then cutting it down. It mows anywhere from two to four times a week, so you can come home every night and your lawn is the same length.”

Plus, according to everyone we talked to for this story, those lawns tend to be a lot denser and lusher, almost like golf greens, because the frequent mowing means clippings are constantly fertilizing the grass.

Robotic lawnmowers are also more environmentally friendly than their gas-guzzling counterparts, which is one reason why Orangeville, Ont.’s Whispering Pines Landscaping installed about 10 on clients’ properties last summer. “You’re also saving money by not burning those fossil fuels, because they’re battery-operated,” says the company’s marketing director, Leah Brakke. “You’re putting out the money for the one-time purchase, but your input costs are definitely less. The batteries last a really long time, too. A family member had one in Holland for 15 years and only replaced the battery once.”

Lawns mowed by robotic mowers tend to be a lot denser and lusher, almost like golf greens, because the frequent mowing means clippings are constantly re-fertilizing the grass.”

Bloomingdale, Ont.’s Wright Landscape Services tested a couple of robotic mowers last summer, and president David Wright says one of the biggest pluses is they will likely help his company do more with less. “Instead of having a cutting crew go out and do a property, they will be there to do planting beds and that kind of stuff, which is a higher margin type of work.”

Of course, robotic mowers will also help landscapers deal with labour shortages, says IslandEarth’s Dean Ross. “There will be a time, in about a dozen years or so, when companies will cut their staffing needs by half. No question about it. One hundred per cent that will happen.” 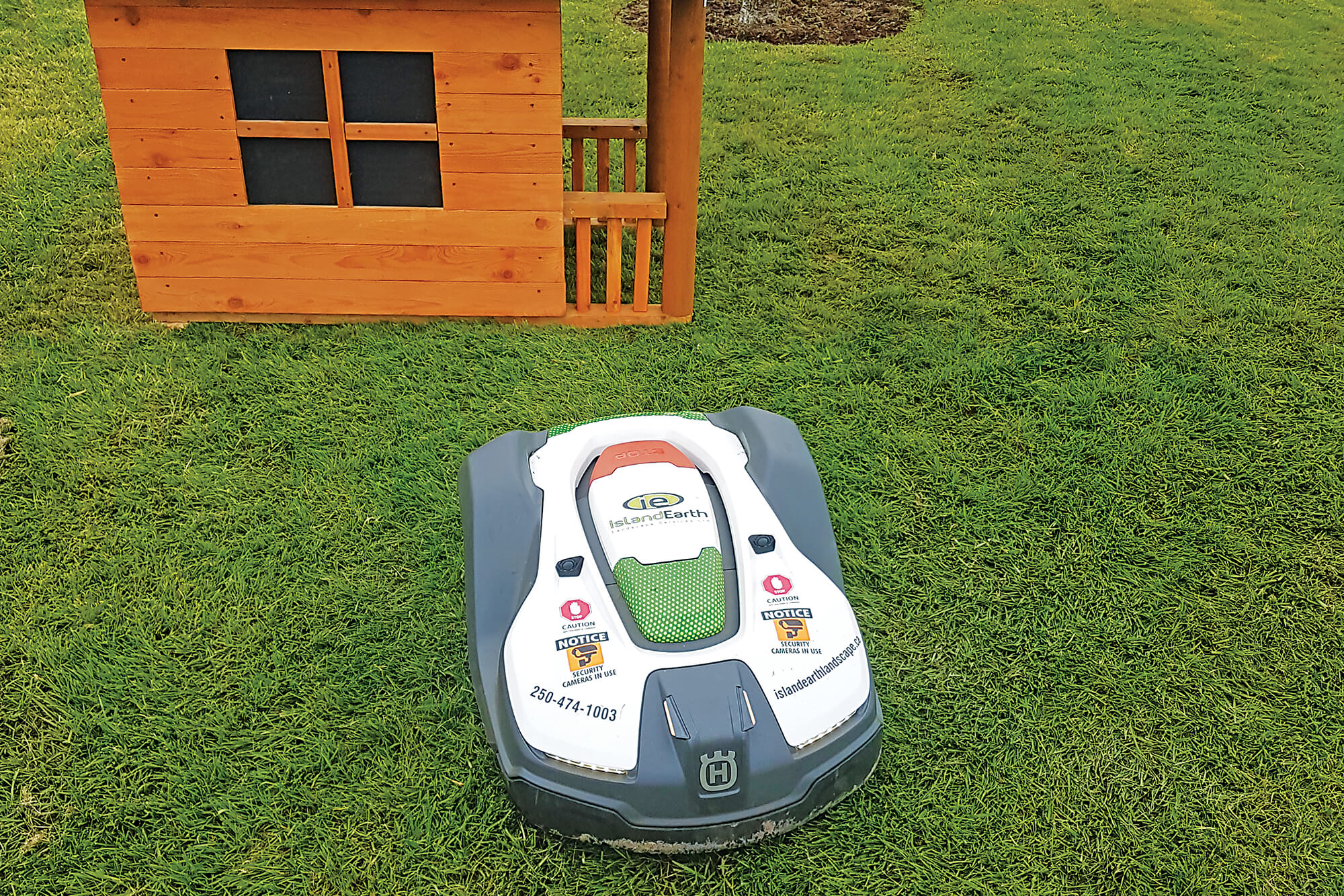 Robotic mowers save on people-power and can be programmed to keep your customer’s lawn the perfect length. The cons
Before all of those workers are replaced, though, a few kinks will need to be worked out. Number one is cost. The mowers TurfBot uses cost about $1,700 each, while IslandEarth’s are $10,000 each. Those numbers should come down as robotic mowers become more popular, but that will take some time.

Many of the current mowers don’t work optimally on everyone’s property, either. When David Wright’s crews were testing them last summer, they ran into issues with the mowers falling into tree rings. “The manufacturers told us to just bound up the tree rings, but I don’t agree with that because they’re telling you to change the way you do maintenance to make the robot work better,” says Wright. “You’re also affecting the look of the property by doing that. We want nice deep edges, and we want things to look nice and precise, and what they’re saying is to have the dirt right to the edge so that it won’t fall in.”

The zig-zagging nature of robotic mowers also means they don’t leave clean lines, and Wright found that some clients didn’t like that. In response, his crews had to return to the properties every couple of months just to put those lines in.

Dealing with fences can also be an issue. Wright’s crews ended up raising some fence panels and cutting off bottoms of fences so the mowers could pass through. It worked, but it wasn’t ideal, says Wright, because it does restrict your ability to mow a large property if there are fences and gates. Leah Brakke agrees, but says there are workarounds, including using multiple mowers or installing one or more of American company Robin’s patented doggie doors for robotic mowers.

Another potential challenge is the cost and time involved in training the public about these machines. Because robotic mowers are so new, the public is curious about them and so people tend to touch them or pick them up, which causes them to shut down. IslandEarth has one on a property near the University of Victoria, that gets noticed by a lot of inquisitive students. “We’ve been called out four or five times a day to start it back up,” says Ross. 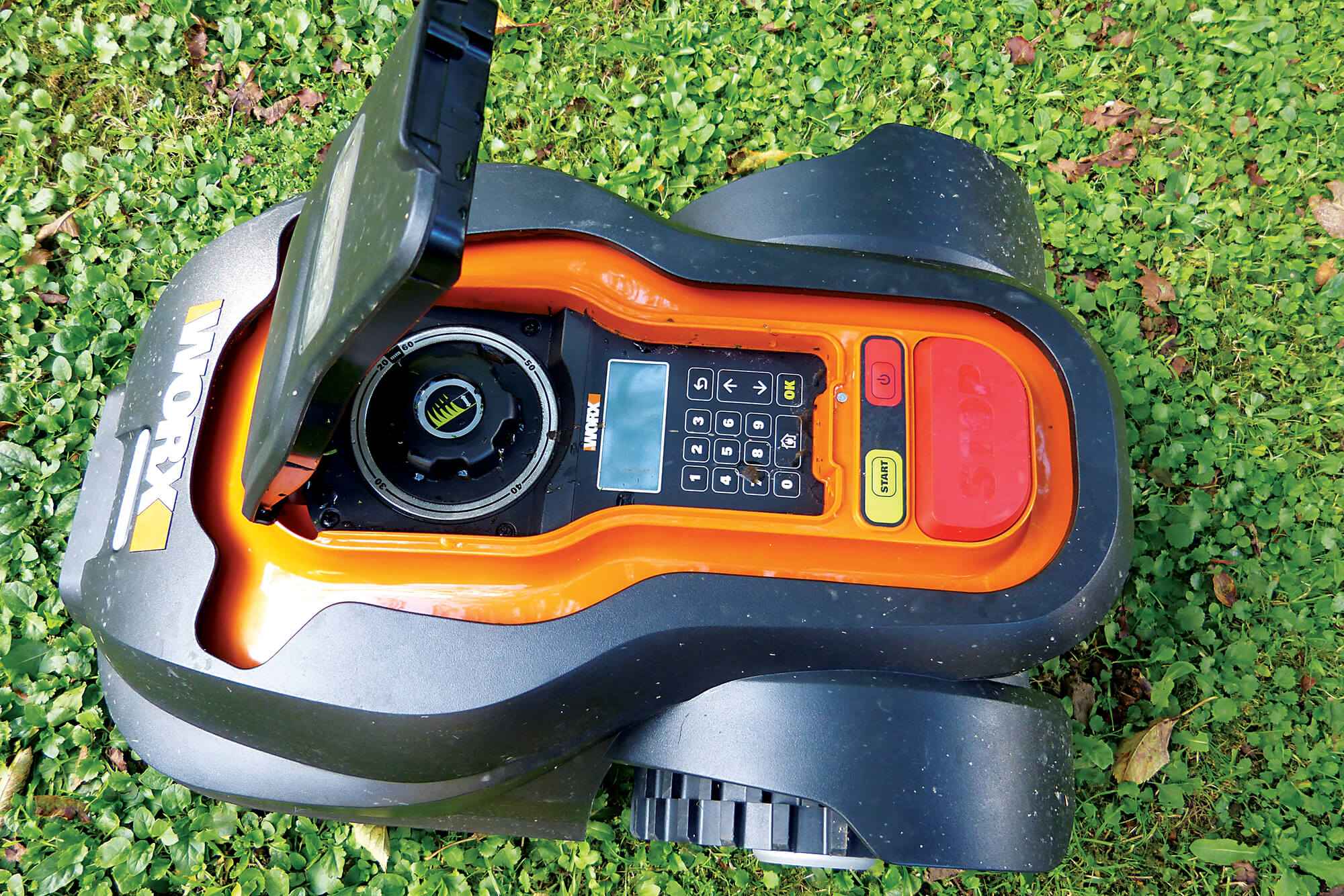 Robotic mowers allow maintenance crews to focus on planting beds, trimming shrubs and hedges. Advice for success
The novelty of robotic mowers also means there can be a lot of education involved with potential clients. IslandEarth was the first landscaping company to introduce them on Vancouver Island a few years ago, but Ross says it can still take time to convince potential clients and answer all their questions.

One typical first question, says Ross, is why would they want one on their property. “And you say, well, number one it’s good for the environment, and number two it doesn’t cost you very much money at all — you just have to supply the power.”

Another big question he gets: Are they safe? “It has been a problem in the U.S. with people stealing them, but the one we use has five different safety components, so no one steals it,” says Ross. “That also means that they are safe to use around kids. Once you’re past that, clients are pretty much onboard.”

Leah Brakke’s big piece of advice for landscapers new to robotic mowers is to learn as much as you can about them and their limitations, so you are not selling them to the wrong people.

She also suggests having a demo mower on hand people can try, as well as having a solid sales pitch. “You want to make people comfortable with the idea, so know all of the pros and cons, maybe even use something relatable that people already understand, like the Roomba.”

As for David Wright and his company’s testing of those robotic lawnmowers last summer, he says he isn’t quite sold on them, yet. “It’s not quite there for us, but it’s getting closer. I think within a couple of years the technology will be there, but right now they aren’t the best for our operation.” Jordan Whitehouse is a Kingston, Ont.-based freelance writer.
Share
Tweet
Mail