Crop diseases are caused by a variety of pathogens, but it’s the fungal pathogens that are the primary cause of crop loss worldwide. Fungicides are pesticides that manage fungal disease by specifically inhibiting or killing the fungus. A great deal of information is available on fungicide application, but until you’ve read enough of it, it can seem complicated or even contradictory. When considered collectively, generalities emerge and can be classified under six categories, as illustrated in Figure 1.

Note that the categories overlap. This is because changing one element often means reconsidering another. Therefore, there is no magic-bullet protocol for applying fungicides. Rather, the best results are achieved by considering each category and balancing benefit and compromise case-by-case. The method is often crop-specific, so it’s difficult to generalize and won’t be specifically addressed in this review of best practices.

Know your product chemistry. Fungicides have different chemistries and should be applied according to their mode of action. Locally, systemic products have limited movement within the plant, often as little as a few millimetres and rarely throughout a leaf, or into growing tissue. Contact products must physically touch the pathogen, so there’s very little margin for error.

Time of application is based on integrated pest management (IPM) protocols. This means disease scouting, monitoring the stage of crop development and following established disease forecasting models, NOT the calendar. Fungi have life stages, when they are vulnerable to specific fungicides, so applying too early or too late defeats the purpose.

Most fungicides are protectant products, so they must be applied before the infection occurs. A few are curative, which means they can be applied shortly after the infection has begun, and have a limited kickback effect up to about 48 hours. Spray intervals are discussed further into the article, but as a rule, protectant fungicides are applied more frequently than systemic fungicides. This is because emerging leaves will have little or no protective spray and will require protection.

Following IPM greatly improves crop protection and prevents unnecessary applications. Don’t rely on kickback, systemic movement or rain-redistribution of any product to make up for poor timing or poor coverage. No fungicide is reliable once a disease (and spore production) has reached a high level. Any additional spraying will not save the crop.

Target coverage describes the percentage of a target’s surface that received spray. It also describes the size and distribution of droplets. Consider a leaf with three large droplets and another leaf with 80 small droplets. Both can have the same volume of pesticide and the same percentage of coverage area, but the leaf with more droplets is better protected. Consider further, two leaves with 80 droplets each: now they have the same coverage, but one was sprayed using more water than the other and therefore has less active ingredient per droplet. It is debatable, but good coverage generally equals good efficacy and the best results are achieved when susceptible surfaces have about 80 droplets per square centimetre, sprayed with fine-to-medium droplets, with a concentration no less than label rate (see Figure 2). 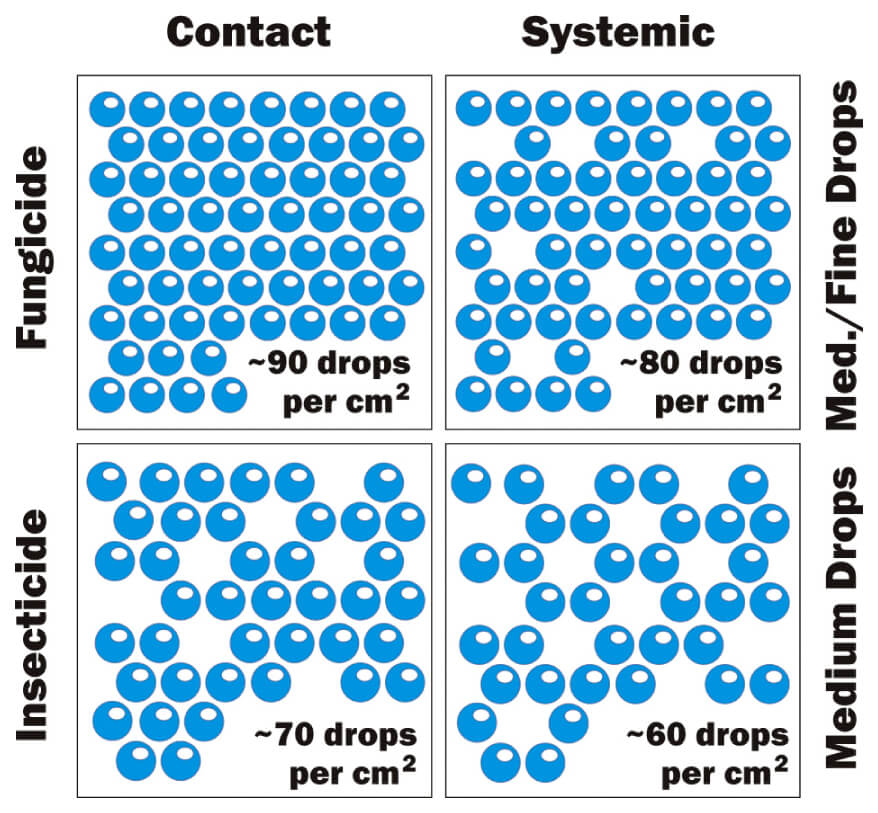 Figure 2 – There will always be exceptions, but generally these are ideal droplet sizes and deposit densities for fungicides and insecticides.

Figure 3 – Spray coverage of water-sensitive paper from least to greatest.
To get a better sense of what adequate fungicide coverage really looks like, consider Figure 3. These are water-sensitive papers used for evaluating spray coverage and canopy penetration. The paper is yellow and is stained blue by exposure to aqueous spray droplets. It is perhaps surprising that paper #2 represents the ideal: just over 80 discrete droplets per square centimetre, with droplets between fine and medium (200-300 micron diameter). Water sensitive paper is relatively cheap and can be obtained from any nozzle supplier; it provides immediate feedback as to the quality of the application and you should always have a packet (and a few clothespins) handy for a quick evaluation.

As a final thought, coverage can sometimes be improved through the use of adjuvants (e.g. spreaders, stickers, etc.), but be aware that many products include adjuvants in the formulation; don’t add any unless indicated on the label.

At minimum, calibration and sprayer adjustment should occur at the beginning and about mid-way through each spray season. This is true, whether spraying a row crop or an orchard, as the size, shape and density of the canopy and the specific location of the pest all change throughout the season. This requires nozzles to be re-oriented and the use of higher carrier volumes compensate for the changes.

When using a boom sprayer, the spray overlap, boom height and operating pressure must all meet nozzle manufacturer specifications. As the canopy fills, you may need to change to higher rate nozzles, raise the boom to maintain distance-to-target and possibly add air-assist, or drop-arms to improve inner canopy penetration.

In directed airblast applications, it is important to orient nozzles so that the spray just covers the tops of trees, vines or bushes and to distribute the spray according to the profile and density of the target. For example, two-thirds of the spray should be emitted from the top half of the nozzles for a classic spindle apple tree. Rarely considered, but equally as important, the speed and volume of carrier air should change over the season to just rustle leaves at the centre of the canopy. This means air volume should be high, air speed should be low (except to compensate for wind) and running the fan at full capacity is almost never appropriate.

Finally, consider the topography and layout of the orchard, nursery or field and how it might contribute to the development of hotspots. Compensate for rolling land that can alter travel speeds and change both distance-to-target and product distribution for most sprayers.

Consider changing nozzles each season (even ceramics). This may seem extreme, but the cost of renewing an entire set of nozzles is often a fraction of the potential cost of wastage and reduced yield due to poor coverage. Pressure gauges have a limited lifespan, too. If suspected, replace it. Making these two simple changes has demonstrated greatly improved applications.

The window of opportunity for effective fungicide application is a short one – often a day or two. Poor weather exacerbates the issue by imposing further restrictions. This means that labour, materials and equipment must all be available when required. Many growers have insufficient sprayer capacity for their plantings, and resort to alternate row spraying (ARS) and/or higher forward speeds in order to keep up. ARS requires very specific conditions to provide adequate coverage, and is not a consistently reliable method of application. Speeding up, negatively impacts application rate (unless using a rate controller), coverage uniformity, canopy penetration and increases the potential for drift. This negative effect is amplified when driving into the wind, because the shearing effect increases the number of driftable fines, even when using coarser droplets. Studies have demonstrated that attempting to spray with insufficient sprayer capacity results in a loss of time and money. Some producers may need to purchase additional, and/or more efficient, spray equipment.

Monitor weather forecasts and understand the impact on the product being applied. Weather conditions before, during and after spraying, influence spray coverage, retention and efficacy. Spray only when wind direction is consistent, speed is between 2–15 km/h and it is not gusting. In general, do not spray when relative humidity is less than 40 per cent and air temperature is above 25°C. Hot and dry conditions increase drift, because droplets rapidly evaporate, and become fine droplets, vapour or particles of concentrated pesticide. Optimum spraying conditions typically occur on early mornings following overcast nights.

Pathologists advise that prolonged wet, cloudy periods are most conducive to fungal development. In orchards, more than field crops, heavy showers followed by rapid clearing are less of a problem. Fungi usually reach the leaf or the fruit and produce infection during the rain, so apply fungicides ahead of the rain and thus ahead of the fungus. This might require spraying just before the crop is at the right stage. It is better to spray at this time to avoid prolonged rain, which is the lesser of two evils.

There are many reasons to avoid spraying when foliage is still wet from rain or dew. A leaf can retain only a limited volume of spray, so once wet, deposition will not increase beyond the tank concentration and the surplus will run off to the lower leaves and onto the soil. Further, many products must be dry to be effective. Certainly coverage is compromised when rain dilutes and re-distributes product. However, while undesirable, it is sometimes necessary to spray in wet weather to protect new foliage during prolonged infection periods. When protectants are washed away by heavy rain (the classic equation is that for every 4 cm of rain, residue levels are reduced by 50 per cent) and rain is predicted to continue, protectants should be reapplied to protect against ascospores that will mature during wet conditions. Warning: use lower carrier volumes, and don’t expect more than a few days of protection. Also, know that this will not work with products that must dry to be effective. For apple scab, for example, pathologists at Cornell University suggest it can be done with sulphur, captan and mancozeb in extreme circumstances.

When you take the sprayer out of the barn at the beginning of the season, don’t just set it and forget it. Take the time to consider each spray application before you start filling the tank. Make adjustments according to these best practices and use your judgement.

Figure 2 – There will always be exceptions, but generally these are ideal droplet sizes and deposit densities for fungicides and insecticides.

Figure 3 – Spray coverage of water-sensitive paper from least to greatest.