Awards ceremony reflects prosperity and passion of the industry

Share
Tweet
Mail
The ballroom at the International Plaza Hotel became a testament to the prosperity of the landscape industry and the individuals who make up its solid foundation, on Jan. 12 at the Landscape Ontario Awards of Excellence Ceremony.

Held in conjunction with Congress 2016, the annual event honoured the best landscape design, maintenance and construction projects by Landscape Ontario members in 2015. The Awards truly reflects the level of professionalism — and the amount of money being spent, on landscape services across the province.

The evening culminated with the announcements of the “top three” awards which earned the highest scores as judged from a panel of industry experts.

The most prestigious of these, the Dunington-Grubb Award for the most outstanding and highest overall scoring construction project, was presented to International Landscaping Inc. which took home a total of 12 awards including another big award, the Don Salivan Award for the best grounds management entry.

Monarch Landscape rounded out the top winners with the Casey van Maris Award for the project receiving the highest marks for execution of unique and innovative design in landscaping.

Not only were 169 awards handed-out for exceptional landscaping projects, but awards were also given to individuals who have contributed over many years to elevate and enrich the industry through their passion, dedication, leadership and vision.

Among these leaders, LO bestowed their highest award, an Honourary Life Membership to Bob Tubby of Arbordale Landscaping and Moonstruck Lighting. A past-president of both the Toronto Chapter and Landscape Ontario, Bob’s vision of LO was that of an organization that brought like-minded individuals together to prosper from one another financially, socially, and professionally. This award is reserved only for those members who have consistently contributed their time, passion, enthusiasm and energy over a period of many years, and have committed a lifetime to furthering the mission of Landscape Ontario. Bob becomes only the twelfth person to receive this high honour.

The Community Leadership Award is given to a member who makes a significant contribution to the community through horticultural work. Mark Cullen met those criteria with his participation over the years with both Canada Blooms and Landscape Ontario on various committees. Mark was also recognized for founding an organization called Trees for Life, whose goal is to achieve 40 per cent urban tree cover, as well as for giving birth to The Highway of Heroes Tribute and for pledging a considerable amount of money to be awarded as horticulture scholarships. 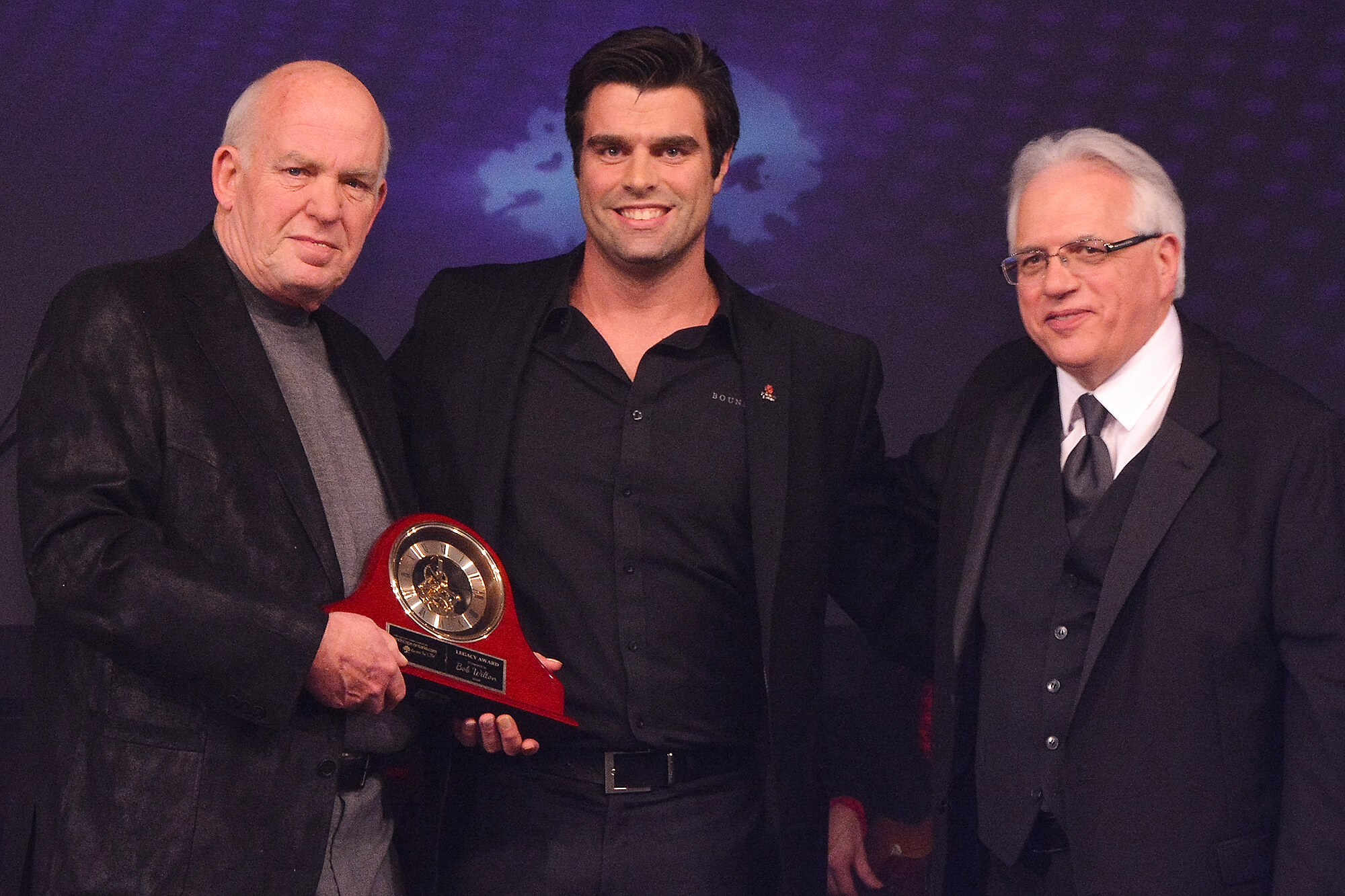 Bob Wilton (left) accepts the LO Legacy Award from his son Jason, joined by LO executive director, Tony DiGiovanni. Bob Wiltons’ son Jason presented his father with the Legacy Award for his role in pioneering both the Grounds Management and the Snow and Ice Management sector groups. The award recognizes a lifetime achievement in the horticulture industry and is given to those who not only impart their knowledge on the people around them, but who also leave something for the generations behind them.

The Past President’s Award is a distinction awarded to individuals who, over many years, have made an outstanding contribution to the association. Jeff McMann received the award for contributing as an Awards judge, a volunteer, and for his contribution in developing guidelines and standards for the industry with the Grounds Management sector group. John O’Leary was also awarded for his work as a volunteer on the Snow and Ice sector group — focusing on education, risk management, and professional development.

The Horticultural Education Ambassador Award recognizes significant contributions made to furthering the educational mission and purpose within the horticultural community. Aldo Cianfrini was recognized for being a trusted and respected advocate for the industry throughout his career at the Ministry of Education. Aldo developed a program that later became the Specialist High Skills Major (SHSM).

The Prosperity Partners Leadership Award is presented to an outstanding individual that has worked through the program and demonstrated business leadership using the five pillars of the Prosperity Partnership model. This year, awards were given to Yorkshire Garden Services, Christine’s Touch Gardening, A Touch of Dutch Landscaping & Garden Services, and The Waterboys Contracting.

The Awards ceremony was hosted by well-known garden personality Frank Ferragine of City TV’s Breakfast Television who announced the winners and provided entertainment for the crowd.

Ferragine noted the significant increase in number of large scale projects in this year’s awards. Private Residential Construction, $100,000 to $250,000, saw 42 winners in that category alone. Private Residential Construction, $250,000 to $500,000, had only eight winners last year, but a staggering 34 winners this year, and finally, the $500,000 to 1 million dollar category had only one winner last year, but eight winners this year — an indication of the growth of demand for premium landscape projects.

For the second straight year, the Awards Ceremony was streamed live online and can also be watched  via the Landscape Ontario YouTube channel or directly at http://bit.ly/1nefW1d 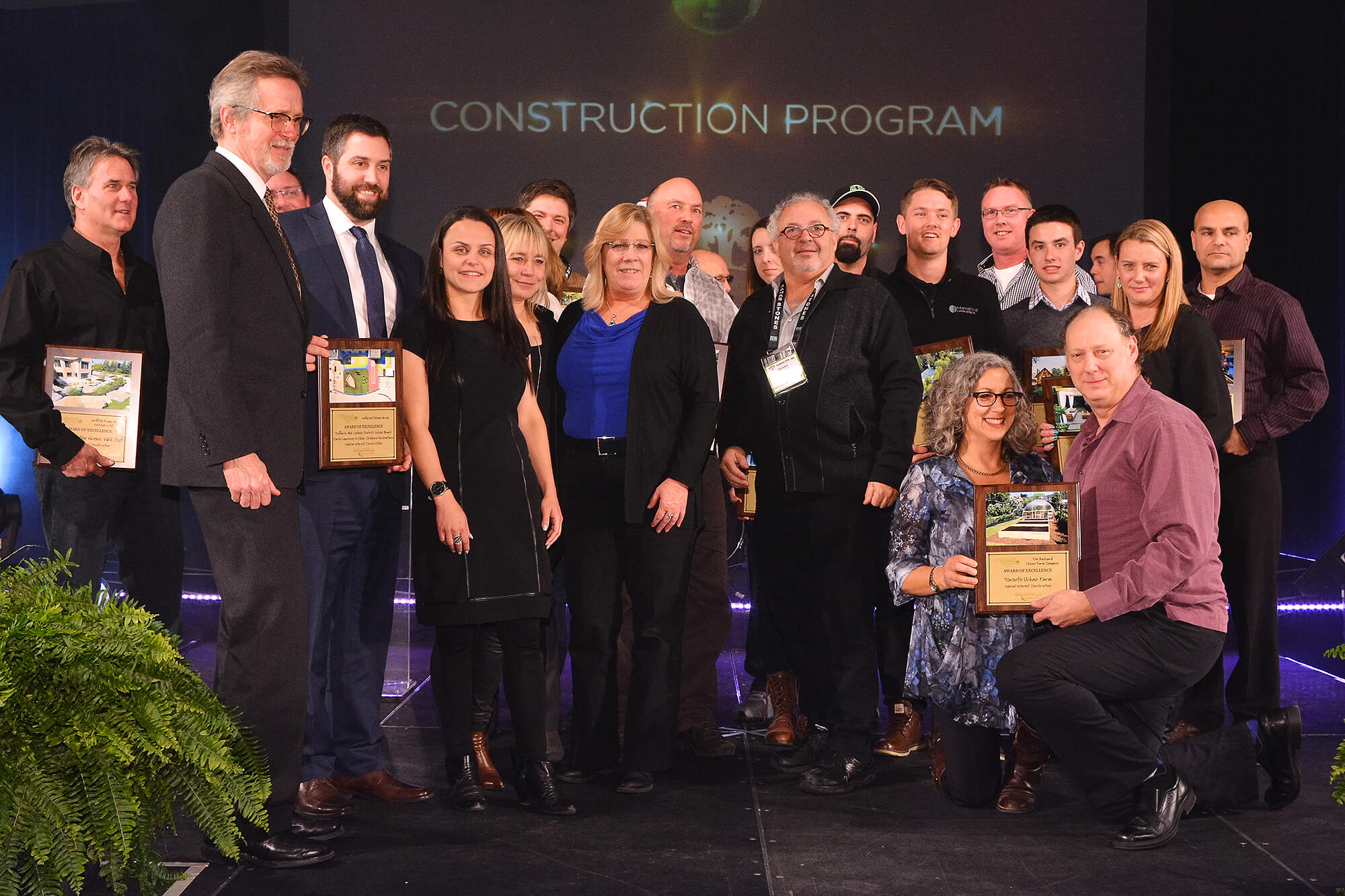