A bronze statue of Len Cullen in Whitby, Ont., serves as a lasting tribute to his legacy and vision.

A fitting tribute to Len Cullen 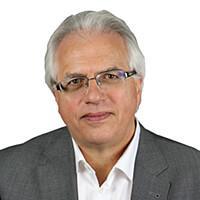 One definition of the word, “visionary” is a person with original ideas about what the future will or could be like. One definition of “pioneer” is a person who is one of the first to use or apply a new method or area of knowledge; one who lays the groundwork, leads the way, blazes a trail and breaks new ground.

The late Len Cullen was both a visionary and a pioneer. He inspired many. His passion and enthusiasm for gardens and business lives on in the hundreds of employees and associates who have made their mark on the horticulture and landscape profession.

Recently, I had the privilege of attending the unveiling of a bronze statue of Len Cullen in Cullen Central Park in Whitby, Ont. Len’s daughter, Sue Green, was the main initiator of this special tribute. Her heart-felt remarks about her father described a passionate leader who was not afraid to dream big and to work hard to realize his visions. In so doing, Len also elevated the horticultural profession. Thousands, if not millions of people were touched by their positive experiences at Weall and Cullen Nurseries, Cullen Country Barns, and Cullen Miniature Village.

From an industry perspective, thousands were employed and received their training at businesses started by Len Cullen. Many became leaders in the industry and in Landscape Ontario. Len’s son, Mark Cullen is Canada’s most popular garden communicator. Mark is also one of the few Honorary Lifetime Members of Landscape Ontario. Denis Flanagan, LO’s public relations and membership services manager, is a very close, long-time friend of Mark Cullen and a former Weall and Cullen employee. Len’s son, Peter Cullen, is a past-president of our Ottawa Chapter. Bruce Cullen volunteers on the Durham Chapter board. Art Vanden Enden, Vice President of Retail Sales for Sheridan Nurseries, got his start at Weall and Cullen, so too, did LO Peer to Peer Network Manager, Jacki Hart, and long-time Show Committee member, Beth Edney. Durham Chapter board member, Norm Mills, worked for Weall and Cullen early on in his career. The late Paul Olsen, an LO past president, got his start with Len Cullen and went on to become the owner of BTN Nurseries, one of Canada’s largest wholesale nursery growers.

I am sure a book could be written about all the individuals that had their start working for Len Cullen.

Len was an excellent gardener from many perspectives. He cultivated businesses, attitudes, people, families and communities. What a great legacy he has left us. The bronze statue captures the essence of his vision and pioneering spirit.
Tony DiGiovanni
LO Executive Director
tony@landscapeontario.com