The numbers indicate we are going in the wrong direction. When we look at the root causes for those utility hits, nothing has changed. The lack of locates is still the number one reason for utility damages. Let’s look at the overall numbers and let you be the judge. It’s important to first note some of the increase may be due to an increase in the number of firms that are mandated by Bill 8 to submit their data and be part of the new provincial ON1CALL system.

It seems in the last three years we have gone to sleep at the switch. The trend in the numbers may not seem that serious, but it does signal there could be a fundamental problem that we should address now, rather than later. Let’s now look closer at the landscaping and fencing sectors of the green industry to see how we are doing. Some of this data was released only very recently. 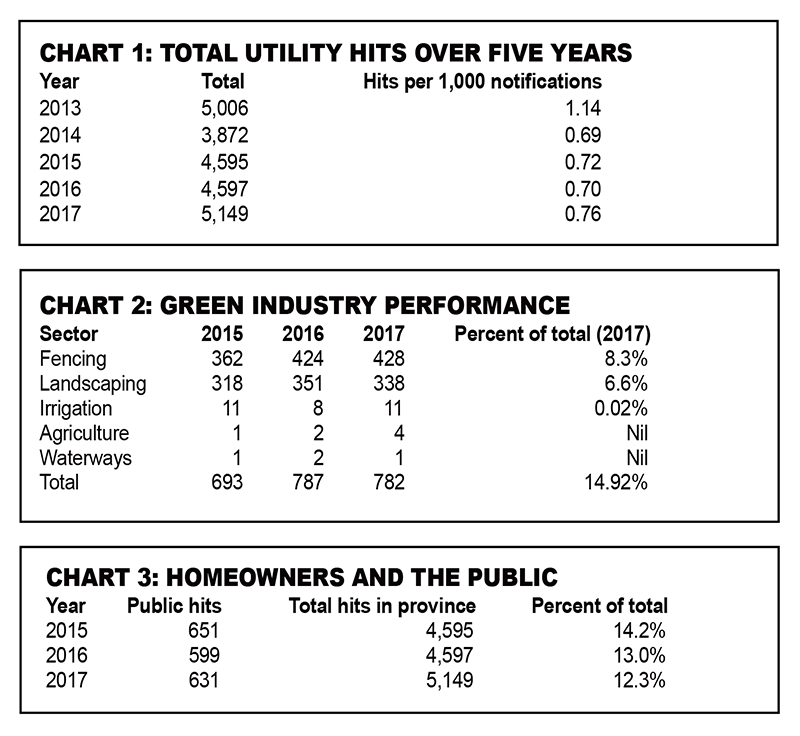 Things have not changed very much for the landscaping and fencing sectors over the last 12 months. The green industry continues to be responsible for 15 per cent of the total underground utility hits in Ontario. This has remained the same for years. As you can see from Chart 1, we are relatively constant in the total number of hits in the province. Yes, we can take some consolation that the total hits per 1,000 notifications is slightly declining or remaining about the same. Chart 2 specifically deals with the landscape professions. Please note that while landscaping has made some small improvements, fencing is not improving at all and may require some attention.

The goal of the Ontario Regional Common Ground Alliance (ORCGA), is to educate all those who dig — contractors and the public — on the requirement by law for locates and the dangers lurking underground. Despite our efforts at Congress, Canada Blooms, and through various Dig Safe events, the numbers have not changed dramatically. Why is it that the statistics remain the same even with increased advertising through ON1CALL and the ORCGA? Is anyone listening?

Let’s look at the figures for homeowners/the public to see how they are doing.

Just like the green industry, the public accounts for about 15 per cent of the total number of utility hits in the province. Unlike industry, their overall numbers are coming down nicely. This could be due to many things, including a recent advertising campaign by ON1CALL on CTV, participation of the ORCGA at Canada Blooms/National Home Show, and work done in the 13 ORCGA Geographic Councils. This is great news and we will continue to work hard to keep the numbers going in the same positive direction. The annual spring “Dig Safe” events in different municipalities also create great public awareness.

Although the numbers can be discouraging at times, efforts will continue with the goal of reducing the number of hits for all those who dig. Making drastic changes takes time and a lot of perseverance. Our mission remains to educate both members and non-members of industry associations, as well as the public on the provincial law that requires all those who dig to first obtain locates.